A Room of My Own

Early on the afternoon of April 4, 2008, after spending two hours working in a windowless room on campus, Marcy left a building to walk across campus to my office. She had entered in the sunshine, but now the sky looked ominous.

Marcy spinning at her wheel in her brightly lit studio. Photos by Terry Petrini

My studio was the third small bedroom in our house. It contained a desk, worktable, file cabinet, shelves, and small closet—all overflowed with fiber, yarns, books, and magazines. The 36-inch floor loom that my husband, Terry, had built occupied the center of the room. My traveling wheel, the one that went with me to so many SOARs (Spin Off Autumn Retreats), moved around the room, changing location depending on what I needed to access.

I jokingly told a fiber friend that the whole house was my studio, but it wasn’t much of a joke. Another loom lived in the family room; fiber books could be found in the kitchen next to the cookbooks; I stored a lidded basket full of fiber in the dining room; and fiber, yarn, and projects waited to be wet-finished in the laundry room. This system wasn’t very efficient, but it worked for over 20 years.

My beloved daily spinning wheel, the one Terry finished when I first started to spin, would be wherever I spun last: the family room, the front room, the kitchen . . . but never outside. Oh yes, she went outside with me, but the wheel always came back in to be protected at the end of a spinning session, and I’d park her next to the patio door, ready for our next time together. Outside on the patio, in fact, was my favorite place to spin, with a glass of wine and in the shadow of my cherished grove of southern pine trees that shaded the patio from the evening sun. The rustling of needles from a gentle breeze often joined the hum of the wheel.

Early on the afternoon of April 4, 2008, after spending two hours working in a windowless room on campus, I left a building to walk across campus to my office. I had entered in the sunshine, but now the sky looked ominous. I could see that it had rained.

As I walked, my cell phone rang. A friend had called to ask, “Do you know if your mom is okay? I tried to get to your house and the roads are blocked, and the phone landlines are down.” I stood silent as I was trying to understand what she said. “I guess you don’t know,” she added. “A tornado hit your neighborhood.” I had to think quickly. Should I go to my car directly rather than to my office? Call Terry? I hadn’t collected my thoughts yet when Terry called. He told me that another friend had been able to reach our house. The tornado had gone between our house and the neighbor’s. Tree limbs were scattered all over our roof, but our house was intact. Terry formulated a plan. He would go home and call me with an update, and he suggested that I wait in my office.

An hour passed. I couldn’t concentrate. No call from Terry. I tried to call him on the cell phone, but there was no answer. I decided that I needed to go home.

It took me an hour to travel the usual 15-minute trip. I encountered blocked roads and traffic lights not working, and the roads that were still open were strewn with debris. At home, I found Terry on the roof clearing it of limbs and branches and checking for damage. From the driveway, I could see the destructive path the tornado had left, as if a giant lawn mower had moved through. I rushed to the patio to check on the damage. My beloved grove of southern pine trees was gone.

Fortunately, all of us, including mom, were safe and the house was habitable, despite the loss of power. 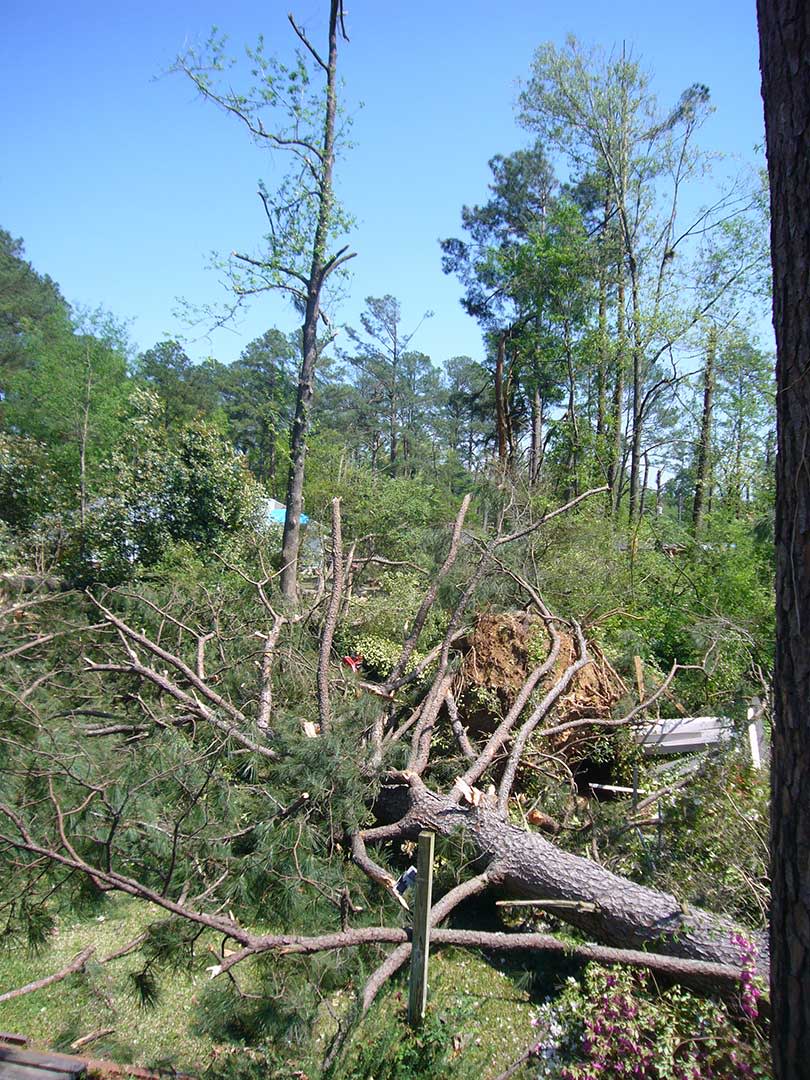 The grove of southern pine trees damaged in the tornado.

The next morning at breakfast, we could see from our kitchen window that the entire backyard was waist deep with tree debris. Many trees were spared, except the grove, which had been right in the path of the tornado. “What is sad,” I lamented to Terry, “is that even if we replant all those trees, we won’t be alive to see them big enough to make a grove.” “That’s right,” he answered. “That’s why we won’t plant trees. Instead, we are going to build you a studio!”

Soon, planning and construction started. The damage to the house had been more extensive than we initially thought, but by the end of the year, I had moved into my new 650-square-foot studio complete with lights bright enough to have the same lumens as outside at midday. It’s always sunny in my studio!

Everything has its place now. The traveling wheel moves only when we go off on a new adventure. My daily spinning wheel sits by the rocking chair, but she still moves around the house to wherever I am going to spin next. And outside, there’s no more rustling of needles, but a fountain gurgles and adds to the spinning wheel’s song.

Marcy Petrini spins, weaves, knits, and blogs at marcypetrini.com. A retired professor from the University of Mississippi Medical Center, Marcy lives in Jackson, Mississippi, with her photographer and webmaster husband and four fiber-producing cats.

This article was published in the Fall 2020 issue of Spin Off.