The Miskin family is dedicated to spreading the word about the resurgence of the American bison. Learn how this rugged animal’s deliciously soft down fiber is gathered and processed.

“Buffalo,” the name most Americans grew up using for bison, does not immediately evoke the image of soft, useful fiber. Yet the bison’s downy undercoat that grows each fall and sheds each spring is the finest truly American luxury fiber available. In fact, “Seriously Warm—Surprisingly Soft” is a tagline we use for our family’s bison products. The curious and excited look we get after handing someone a bison-down garment to touch seems to confirm this.

The down fiber produced by an adult bison has a fairly short staple length, typically about 1½ inches long, and measures 17 to 22 microns. An adult cow (female) bison will have roughly 1cto 3 pounds of down on her body when the fiber has fully matured, which is usually around the first of each year. The soft down grows close to her skin and is what will keep this 1,000-pound animal insulated and warm through the winter months.

We bought our first bison calves in 1991 as a “why not” venture. We had some land in Texas, almost no knowledge of domestic animal husbandry, and not enough sense to realize what we were getting ourselves into. Our first encounter with fine bison down was early spring when we started plucking bits of the shed fiber off the briars in our pasture. It was silky soft, had a beautiful faint musky scent, and felt so comforting against our faces. We dutifully set about gathering what we could, knowing nothing about washing, felting, skirting, or dehairing—all that was to come later.

We continued raising bison and continued collecting the down left in the spring pastures. Time passes, winters and springs come and go. Eventually, we had about six boxes of the “fluff stuff” as we called it. Not knowing anything more about it, we offered the down for sale on eBay. Imagine our surprise when two bidders were fighting over it. Through this experience, we had the honor and privilege to meet Elizabeth Lang, an extremely knowledgeable and personable fiber artist. Experimenting with our bison down at her home in Boston, Elizabeth would correspond with us to patiently explain her process and findings. She asked questions, and she lectured. “Never agitate the bison” became her catchphrase because the very short, very dirty, and very crimpy fiber was easily felted during handwashing.

Elizabeth also led us to promote bison fiber to as much of the bison industry as we could. At that time, there were less than four hundred ranches, most of them quite small, with 20 or fewer head of bison. We encouraged them to pick up the shed fiber, to contact local guilds and clubs, and to use the fiber as a promotional tool to help the general fiber-interested population know that bison ranching had more merit than just meat production. Even though these efforts were sporadic, they did some good and gave hands-on fiber enthusiasts a chance to experience bison. All these years later, several of those relationships still exist. Some ranches allow and encourage annual shed-fiber harvests, drawing spring “pickers” who collect the fiber and create beautifully spun yarns from bison-down blends.

The economic viability of bison down has long been the question. Until recently, every prior venture into modern-commercial processing of bison fiber has failed. Availability, processing costs, and unknown demand have all been significant factors in the challenge to bring bison fiber and bison fiber goods to market. Traditionally, fiber and hair have not been a profitable part of raising bison, but by adding value to the animal, it becomes more economically advantageous to raise animals. More money equals more bison. Looking both to the past and to the future, our family has spent much of the last three decades exploring ways for bison products to support the resurgence of this keystone species in the American landscape. As bison begin to shed in the early spring, they look for places to rub, alleviating itchiness. Large brushes can be used to collect the downy fiber as it is released from the skin.

Bison populations are now estimated to be between 450,000 and 500,000, mostly in the United States and Canada. This is almost double the estimated population of 250,000 when our family started raising bison in the 1990s.

Annually, around 55,000 are processed for meat. It is from these production animals that we are able to harvest fiber during January, February, and March, when the fiber is at its longest and least matted. Before that time of the year, the fiber is still growing and too short. After that, it is shedding and being rubbed into matts and balls that just cannot be untangled. We, like the indigenous tribes before the great slaughter of bison during the nineteenth century, try to use all of this great creature. Why throw away such a beautiful, durable, insulating fiber when we can put it to good use?

After harvest, the fiber has to be thoroughly scoured even though it contains no lanolin or grease. Bison don’t have sweat glands, so to keep cool bison wallow, rolling in wet dirt to pack a layer of soil next to their skin. As such, their short, crimpy fiber retains a lot of the prairie landscape, which needs to be thoroughly removed without felting the down fibers. Scouring bison requires a lot of clean water and repeated long soaks. 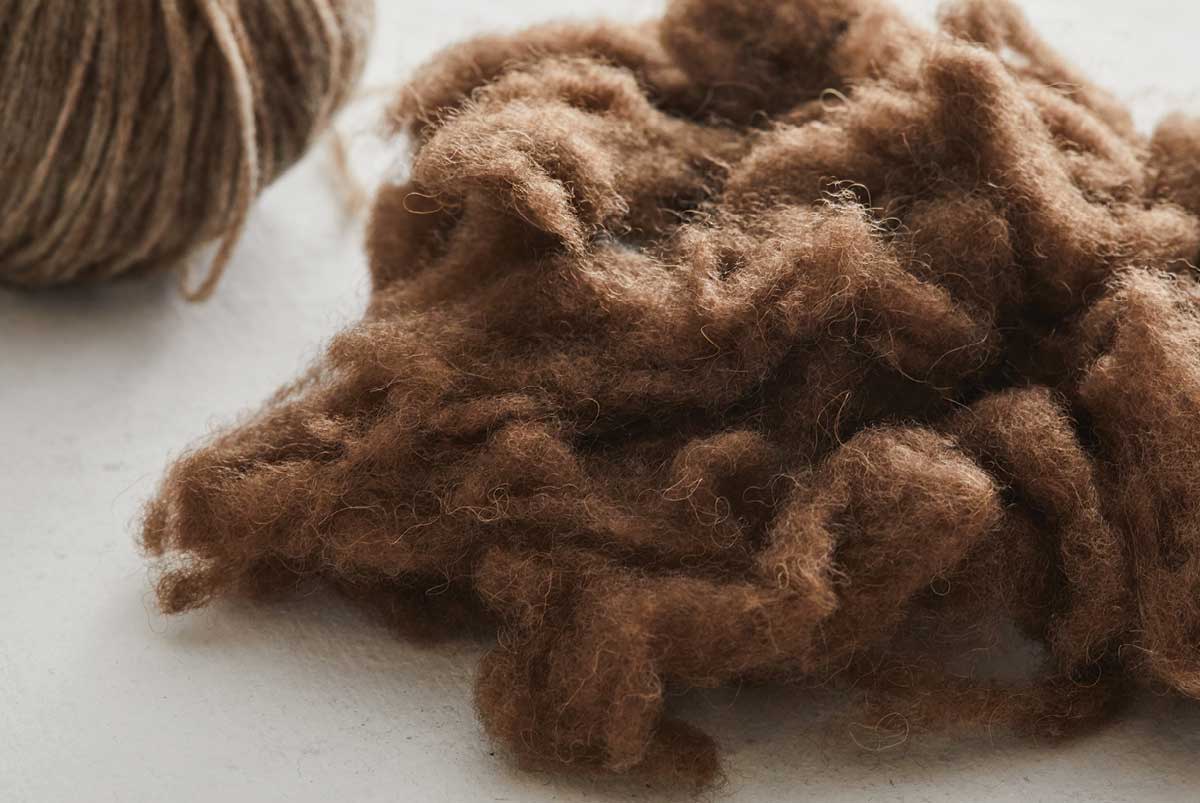 Next, the fibers need to be separated, sorting the fine down from coarse hair. A bison fiber study done by North Dakota State University (see Resources) identified four, or possibly five, different fiber types on a mature bison. A dehairing machine can be used to separate the coarse fibers (primary coat) and guard hairs from the desired fine fibers (secondary coat). The dehairer works primarily by using centrifugal force, transferring the fine fibers between cylinders operating at different speeds, while the heavier, coarse fibers are preferentially ejected. The down is predominantly dark brown, but there are often light or white down fibers as well. There are no measurable differences between fibers of different colors, and when spun, it is all but impossible to see the white down. Unspun, it is relatively visible, but when the fibers are carded or combed and then spun, the down has a very consistent milk-chocolate color.

Bison fiber can be blended with other compatible fibers to extend the available quantity of bison and to add other advantageous properties. Our first fiber blend was actually done to accommodate the machinery at a spinning mill. As the dehaired bison fiber made its way through the carding process and was passed from one carding machine to another, the fine web of short down fibers tended to break. Gary Boudreau, the spinner at Zeilinger Wool Company at that time, suggested adding a bit of fine nylon to the mix to help create a stronger web. Not only did this blend make carding and spinning easier, it also produced a yarn that was significantly stronger than the bison alone, resisted pilling, and was stable for making durable and comfortable goods.

We have since explored blending bison with other fibers with long staples, including Tencel, silk, mohair, camel, yak, and fine wools. Adding any of these fibers to bison down takes a bit of preparation. Choosing blending fibers that are fine and cut to a length of 2 inches or so seems to work very nicely with crimpy bison down. For our current line of products, we produce six blends in several different yarn weights in addition to fiber for spinning.

Preparing and spinning bison down, like any luxury fiber, requires technical knowledge of fiber as well as an understanding of the desired end results. Finding mills that can dehair and spin the fiber to our specifications has been a challenge, but the journey has resulted in some great partnerships and collaborations with some first-class textile processors in the United States. The process has also taught us a whole lot about what it takes to spin a good yarn. We now design our yarns based on tensile strength, abrasion resistance, insulation properties, moisture regain, and hand (the feel of the yarns in a finished garment).

Our first salable product was simply dehaired bison down roving, launched in 2005 at STITCHES West by Linda Cortright of Wild Fibers magazine. The spinning community devoured our roving and, to this day, we still produce and sell about 100 pounds of carded fine down roving each year.

With help from some wonderful fiber enthusiasts, we then started developing and spinning yarns for knitting, crocheting, weaving, and other fiber crafts. We worked with designers to create knitting and crochet patterns and kits.

Our original goal of diversifying the income generated by American bison to bolster their population growth led in so many directions. We have a growing line of felted bison and wool-blend hats with Bollman Hat Company, the oldest felt hatter in the United States, and we developed bison vending machines that bring warm socks and gloves to travelers, fishermen, and oilfield workers in Alaska.

In keeping with the native philosophy of respecting the animal by using every part, we have been developing uses for the secondary coarser fibers that are separated from the down during the dehairing process. We have used bison hair in everything from rugs to garden underlayment fabrics, fly-tying kits to felted insoles. 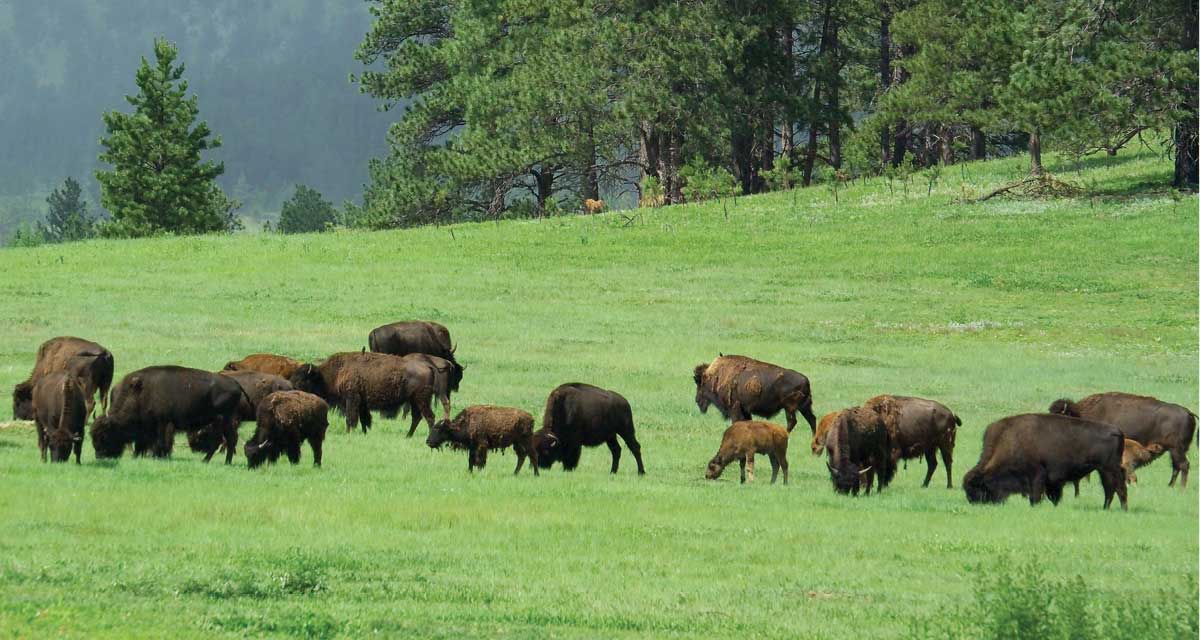 What’s Next for Bison Fiber?

Even with an increase in both public and commercial bison herds in North America and an increased demand and production of bison meat, there is still a very limited and precious supply of fiber. With only an estimated 5,000 to 7,000 pounds of down available each year, it will never replace sheep wool, or even cashmere, as a mainstream fiber. Bison down is a luxury, and with responsible and sustainable practices, we can enjoy and wear this incredible natural resource for generations to come.

Two innovators in the current resurgence of bison down are important to note. Duane Lammers was the first in recent history to amalgamate enough bison fiber to have it commercially scoured, dehaired, spun, and woven into this beautiful cloth. Bison populations were decimated in the late 1800s (see page 57), and there wasn’t a sufficient commercial supply of bison down available until about 1995, when the relatively new North American Bison Cooperative in New Rockford, North Dakota, ramped up commercial bison meat production to over several thousand head per year. Duane was then able to have access to a sufficient quantity of bison fiber for commercial processing.

Bison is the correct name for the largest native land mammal in North America. The term buffalo more correctly applies to the Asian water buffalo and the African Cape buffalo, which are scientifically distinct from the American bison. However, old habits die hard, and many people still refer to the American bison as “buffalo.” In fact, we have called them buffalo in the United States for almost two hundred years. Our family companies Buffalo Gold Premium Fiber and the Buffalo Wool Company are in keeping with this long tradition.

The History of Bison in North America

Editor’s Note: For thousands of years, bison herds thrived in North America, playing a vital role in the landscape and in the lives of indigenous peoples. In the nineteenth century, bison populations were decimated, dropping from the millions to the hundreds.

Here are a few resources if you would like to learn more about this complex and difficult chapter of history and modern efforts to recover bison populations in North America.

This article was published in the Winter 2020 issue of Spin Off.