Bobbin Boy to the Rescue!

Meet Alan and Milissa Dewey, the fiber-tool restoration duo behind Bobbin Boy.We had to know more about these superheroes of the spinning world.

When there’s something strange happening and your antique spinning wheel won’t spin yarn, who you gonna call? Bobbin Boy! Restoring vintage flyers! Crafting custom bobbins! We had to know more about these superheroes of the spinning world. Meet Alan and Milissa Dewey, the fiber-tool restoration duo behind Bobbin Boy.

Alan, the world’s foremost restorer of antique chess sets, met Milissa, a historian, when she took an interest in game theory and game pieces. She and Alan clicked fairly quickly. After a transatlantic courtship, Alan decided to move to the United States, where they were wed.

Several years ago, Milissa asked Alan to replicate some spinning wheel bobbins for her, as she was tired of reeling off the singles between bobbin-loads. He brought eleven bobbins back later that very day! Milissa posted this sudden manna of bobbins online and received immediate orders. A business was born. 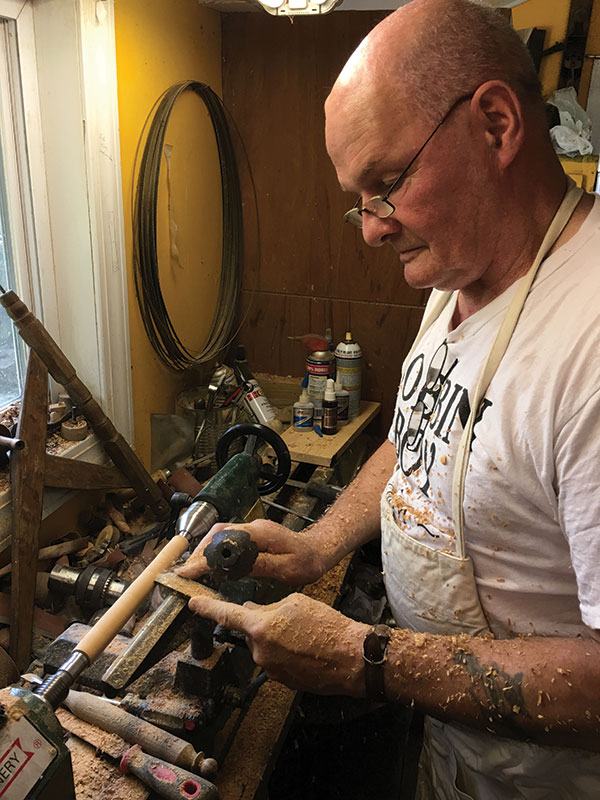 Alan in his workshop replicating an antique spinning wheel bobbin.

Spin Off (SO): What especially challenging spinning wheel restoration job have you taken on? BB: We often remember a Tennessee-made “Granny Greer”-style great wheel that some dear soul in the past carried over land and sea for nearly ten thousand miles . . . to Tasmania! Tasmania, in case your memory of geography fails you, is south of Australia. We restored that wheel from a distance, using measurements and photographs. It is working now for a professional Tasmanian spinner, who uses the wheel regularly and sells the yarns that it makes.

SO: What are the oldest and rarest wheels you’ve repaired? BB: Wheels are difficult to date. Professional woodturning shops often held local monopolies, and had no need to stamp their wheels with their insignia, dates, etc. Everyone knew who they were! We have seen stamped and dated wheels with indisputable provenance from the early 1700s that were identical in every respect to wheels from the late 1800s. So, to make a long story short, we don’t know with any certainty the oldest wheel we have seen in our workshop.

The rarest wheels are usually “parlor wheels,” as they were almost always constructed with the purpose of being unique and ordered to be presented as wedding gifts and such. Aside from these intentional one-off works, we have restored known antiquities from the Aegean region of Turkey, Greece, and the Tyrol region of Central Europe. We restored a beautifully carved wheel from the Black Forest of Germany, which included a carving of a man, possibly Atlas, at the treadle base who appeared to be lifting the footman on every revolution. 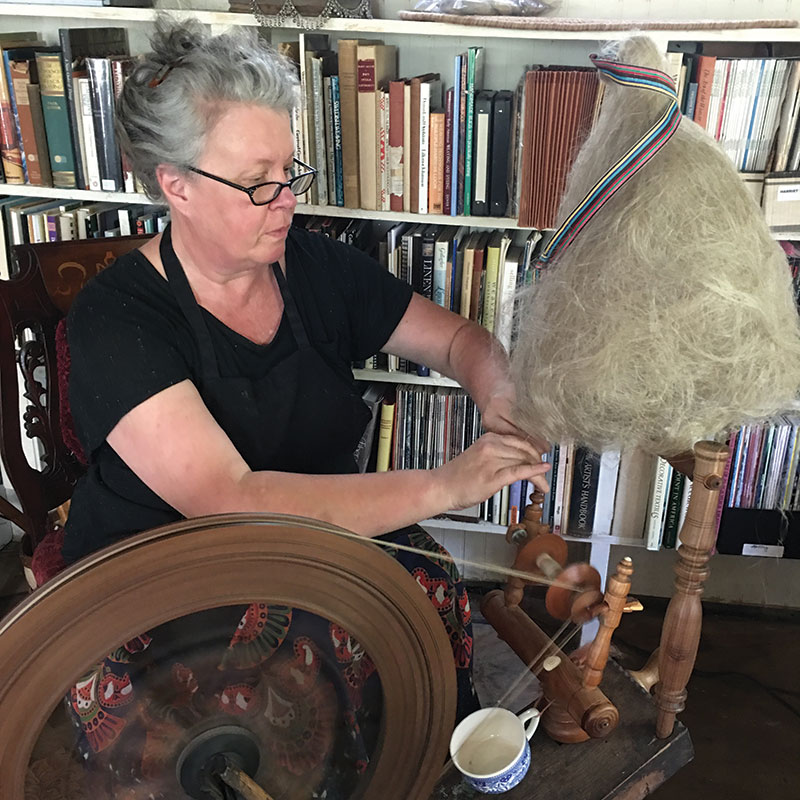 SO: What should a spinner with an antique wheel consider before getting it repaired? BB: You have to ask yourself, “What do I wish to accomplish?” Most wheels can be restored to competence; they will work. But they might not be as simple to operate as a modern wheel. Also, the historical wheels might have limitations if you wish to produce the entire range of modern yarns, because the bulk of historical spinning was made up of fine, tightly spun singles made to produce woven fabric. Thus the historical wheels were geared to producing exactly this type of yarn, and the end result physically is that the flyer orifices are small, the speed is high, and the flyer hooks are teeny. We offer an option to change the orifice to ½ inch rather than ¼ inch and make slow whorls. But if you make either of these changes, the wheel no longer remains historically accurate. If historical accuracy matters to you, then you will have to work on a finer scale and learn to either work at a faster speed or treadle more slowly!

SO: What is the most common repair request you receive? BB: Broken flyers; we make absolutely endless numbers of flyers. We also make lots and lots of bobbins, either to fit the existing flyer or to match the existing historical bobbin. Since most spinning in the past was to produce singles, you usually don’t get lots of bobbins with the wheels. Modern spinners tend to ply, and thus need bobbins. There is nothing especially forbidding about any spinning wheel repair. Honestly, it is usually just good, solid woodturning skills to fix them. So we fix them.

SO: Who gave you the name Bobbin Boy? BB: Milissa is the daughter of poet George Ellison. She named both Bobbin Boy and Mountain Mama Weavers, her weaving business, where she trains apprentices in the trade. Maybe her love of alliteration is genetic. If nothing else, the names are memorable and not pompous. We try to not be pompous.

Follow the adventures of Bobbin Boy on Facebook; to learn more about their services, visit www.chessspy.com, or email [email protected]. This article and more can be found in the Spin Off_ Winter 2018_ issue, which is devoted to the natural fibers that keep us warm all winter long. Don’t have a vintage spinning wheel? Learn how to how maintain your wheel from a pair of master wheel makers. Featured Image: Alan and Milissa Dewey make up the team better known as Bobbin Boy. Photos courtesy of Milissa Dewey.