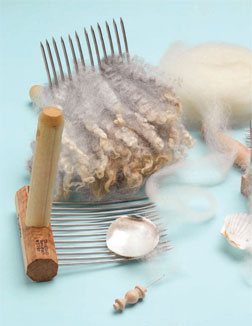 Did you celebrate Saint Blaise day yesterday? Unlike the fictional Saint Distaff, St. Blaise is a church-recognized saint, specifically the saint of wool combers. Like Saint Distaff, he deserves the attention of spinners (if only as an excuse to celebrate our craft).

Saint Blaise was an Armenian physician and bishop of Sebastea in historical Armenia (modern Sivas, Turkey). He is primarily believed to intercede in cases of throat illnesses and especially for objects stuck in the throat. In the Catholic Church, crossed candles are used for the blessing of throats on February 3. Although he was martyred in Turkey in the early fourth century for his Christian faith, his connection to the throat made him a popular saint in Medieval Europe. He was venerated as one of the Fourteen Holy Helpers, a group of saints recognized for their connections to various ailments and believed to be helpful during the time of the bubonic plague. 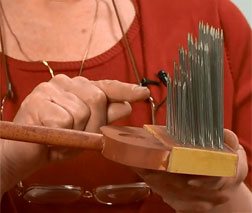 Robin Russo explaining what makes an English comb in her Combing Fiber DVD.

Unfortunately, it isn't St. Blaise's aptitude for healing that connects him to spinning. He is often shown with the instruments of his martyrdom, iron combs. These instruments of torture were similar to wool combs and led to his adoption as the patron saint of wool combers in particular, and the wool trade in general.

Although Saint Blaise's connection isn't the most uplifting, woolcombers everywhere often refer to him symbolically when recognizing the importance of our craft and celebrating the role it has played in history. Spin on,