Some angora and cashmere fiber producers prefer to shear the animals and harvest all the fiber at once, even though it means collecting both the undercoat and guard hair.

Isolated in the Alay mountains, the Jaidari goat produces fiber of extraordinary softness and quality. Photos by Ilya Tarasov

[Anne, this is a pretty markety post, and is almost all quotes (though from what I'm not sure). Those are marks for removing it, but it's also educational, so I left it for now.]

Whether it’s wool off a sheep’s back or the hair on your head, some animals need a haircut. But humans domesticated sheep thousands of years before we invented wool-shearing tools, and plenty of fiber animals still shed their wool or fur. Some angora and cashmere fiber producers prefer to shear the animals and harvest all the fiber at once, even though it means collecting both the undercoat and guard hair. Others comb or brush, a more time-consuming process that gathers less guard hair.

For the Jaidari goats in Kyrgyzstan, combing has an extra advantage: it protects them from cold and windy weather. When Sy Belohlavek, who created the June Cashmere company, discovered that they were shorn and their fiber undervalued, he decided to change things. The yarn from June Cashmere has all been hand combed from these extraordinary goats.

“The goats’ downy undercoats should be collected in a short spring window of natural molting, before shepherds lead the goats up the mountains for summer or before the fibers become matted. Until recently, Chinese buyers would enter the villages early in the season to purchase sheared fiber, leaving goats bare against the chilly mountain air. To change such practices, educators travel from town to town in search of women with goats, since it is the women who gather the fiber. 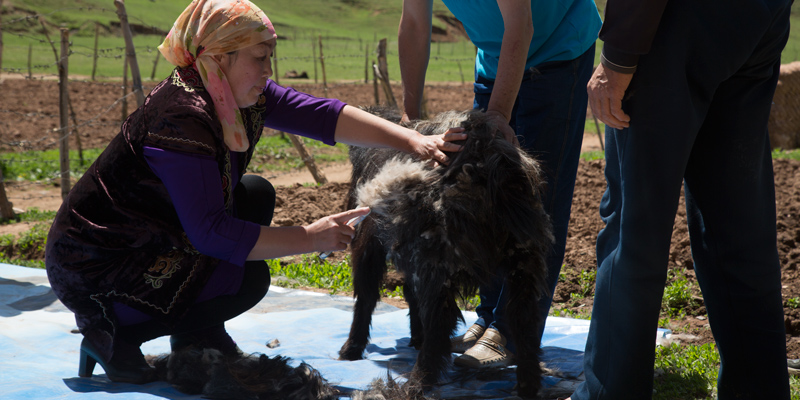 In the spring, after the goats have molted but before they move to higher pastures, the shepherds comb their goats.

“During early visits, most in the region did not know about combing; they had not seen a comb. Only one woman in her eighties remembered combing cashmere decades prior. Disappearing momentarily, she returned with a comb fashioned from the seat spring of a 1950s car. Educators brought newly designed combs and demonstrated proper technique. They also explained what to look for in the cashmere: a micron diameter smaller than mohair, a fiber length of 3 centimeters, a crimp of about seven waves per centimeter, and a distinct differentiation between the cashmere fiber and the long, coarse guard hair. 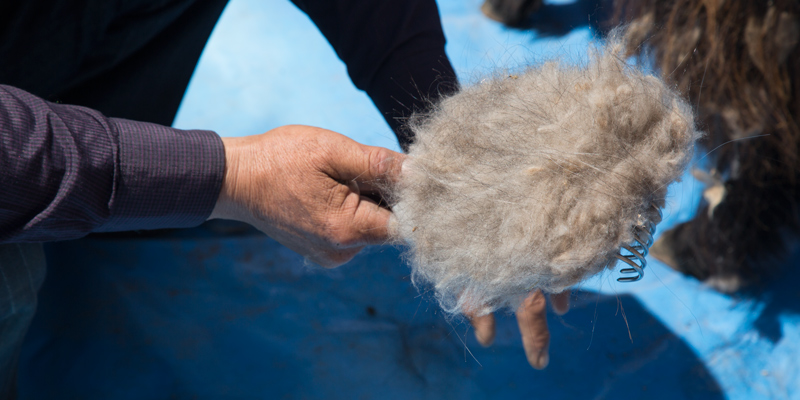 Shepherds have learned to comb the fine cashmere from the goats using special tools.

“Education is making a difference. In one town where the fiber was particularly poor in quality, Sy and his team note a distinct improvement in the overall quality of the fiber in just the third year collecting in that town.

“Life in Kyrgyzstan is hard, and a shepherd family’s income comes from many sources, as family members share labor and income. On average, a family owns ten to fifteen cashmere goats, with a single goat providing some 150 grams of fiber each year. A family can earn a springtime bonus equivalent to one-third or one-half of one month’s salary at spring shearing time, and the production of June Cashmere yarn has boosted a family’s spring income by 40 percent over what shepherds received through shearing and selling to the Chinese.”

Combing the fiber from the goats is entirely separate from combing the fiber during processing. The June Cashmere Cloud to Spin, for example, contains fiber that was combed from the goat and then scoured. In order to give the spinner the most choices, the fiber is offered in “cloud” form, not combed or carded smooth. Read more about our adventures spinning June cashmere.