The Culture of Spindle and Distaff

In many parts of the world today, spindle-and-distaff spinning is a regular and substantial part of fiber processing and textile production, even after spinning wheels have been available for quite some time.

In this excerpt from “How to Spin Balkan-Style with a Distaff,” by Bruce Engebretson with Norman Kennedy, which was featured in the Winter 2017 issue of Spin Off, _Bruce explains the cultural significance of a spindle and distaff.

In many parts of the world today, spindle-and-distaff spinning is a regular and substantial part of fiber processing and textile production, even after spinning wheels have been available for quite some time. Unfortunately, when we in the Western world now see spindle-and-distaff spinning, it is often described as “slower” or “primitive” and viewed as something the spinning wheel replaced. 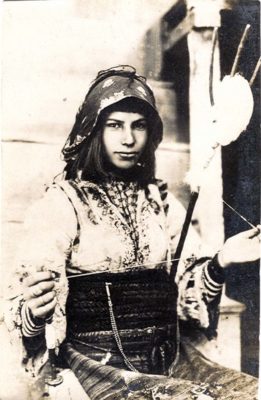 A 1916 postcard shows a young woman in Balkan costume holding a spindle and distaff.

While I [Bruce] was giving a demonstration of spindle-and-distaff spinning, a woman came up to me and, putting her hand on her breast, said to her friend, “That’s just how my mother spun at home in Ukraine.” We had a nice visit about what her mother spun and made (wool, sweaters). In closing, she pointed to my spinning wheel and said, “My mother showed me a picture of one of these and said that when we lived in the country, she had one as well, but when we moved to the apartment in the city, she was unable to bring it, and so my father made one [a spindle] like you are using.” Seeing the spindle and distaff was plainly an unexpected jolt that brought back feelings and memories from a life far away.

Distaffs were famous courting gifts in Nordic countries, made by a girl’s suitor, with great pains taken to show off his woodworking skills. Often the girl’s name or initials were included in the carving (hence the Finnish proverb, “Beware the man of many distaffs”). In Scotland and the Baltic countries, a young man visiting his sweetheart might roll love letters up tight and hide them in the flax of her distaff, where she would not discover them until sometime later. In one Norwegian tale, a girl’s parents are going on and on to a suitor about what a hard worker their daughter is; they say that she spins a distaff full of flax every day. They also show him the larder, full of fine foods. He manages to hide the key to the larder in the distaff full of flax. Returning in a week, he finds the house in disarray. They explain that the key to the larder has been missing, and they are looking high and low for it. Of course, you can guess how the story ends.

Watch Norman spin wool with a spindle and distaff in the preview for From Wool to Waulking. For more on distaffs in traditional flax spinning, see Spin Flax and Cotton: Traditional Techniques with Norman Kennedy.

Bruce Engebretson is a spinner and handweaver. His work and techniques are based on the ethnic traditions of northern Minnesota; studying with Norman Kennedy added context and further enrichment.

Norman Kennedy served as Master Weaver at Colonial Williamsburg and founded the Marshfield School of Weaving . A recipient of the National Endowment for the Arts National Heritage Fellowship, he is also an accomplished singer who performed at the landmark 1965 Newport Folk Festival. Norman lives in New England.