After three summers of dyeing, researching, and experimenting with different parts of buckthorn shrubs, I was able to achieve a surprising range of colors on wool.

Cindy Craft a month ago

As a natural dyer, I am more of a forager than a grower of dyestuffs. Several years ago, I decided to create a 100 percent locally sourced sweater (see Resources) and began using foraged buckthorn as a dyestuff. A handful of berries that I was able to collect from this invasive shrub in late September gave me a lovely substantive green, which is a fairly unusual color in the world of natural dyeing. This first step led me to three summers of dyeing, researching, and experimenting with different parts of buckthorn shrubs to achieve a surprising range of colors on wool.

Buckthorn is a huge genus of shrubs. In my research, I have focused on two of the species in the genus. The first is Rhamnus frangula (also known as Frangula alnus), known as glossy buckthorn, alder buckthorn, breaking buckthorn, or black dogwood. The second species is Rhamnus cathartica, known as common, European, or purging buckthorn. Both species are invasive where I live in Massachusetts, as they are in most of North America. I had been removing glossy buckthorn from my yard long before I discovered its hidden potential as a dyestuff.

Where to Find Buckthorn

If you are an urban dweller living in North America and want to forage for buckthorn, most towns with conservation land and nonprofits who manage land are happy for you to come and collect any and all parts of the two invasive buckthorns I’ve described. (Always seek permission before foraging.) I have an abundant source of glossy buckthorn on my own land. I didn’t know where I could find common buckthorn in my area, so I contacted Trustees of the Reservation, a nonprofit in my area. They were able to put me in touch with folks who manage a park near me with a large stand of common buckthorn. One of the most appealing aspects of dyeing with buckthorn is that I can feel good about cutting down and using up an invasive plant.

The Colors of Buckthorn

Most of my dyeing has been done with glossy buckthorn because there is so much of it near my house. I’ve been able to get four distinct colors from buckthorn and lots of shades within each of those colors on wool. The colors are yellow, green, pinkish-red, and blue. All of the colors have proven to be washfast and relatively lightfast. I have several garments dyed with buckthorn, and most colors do not show evidence of fading. However, I do have one sweater that exhibited noticeable fading after being left in my solarium for a week. 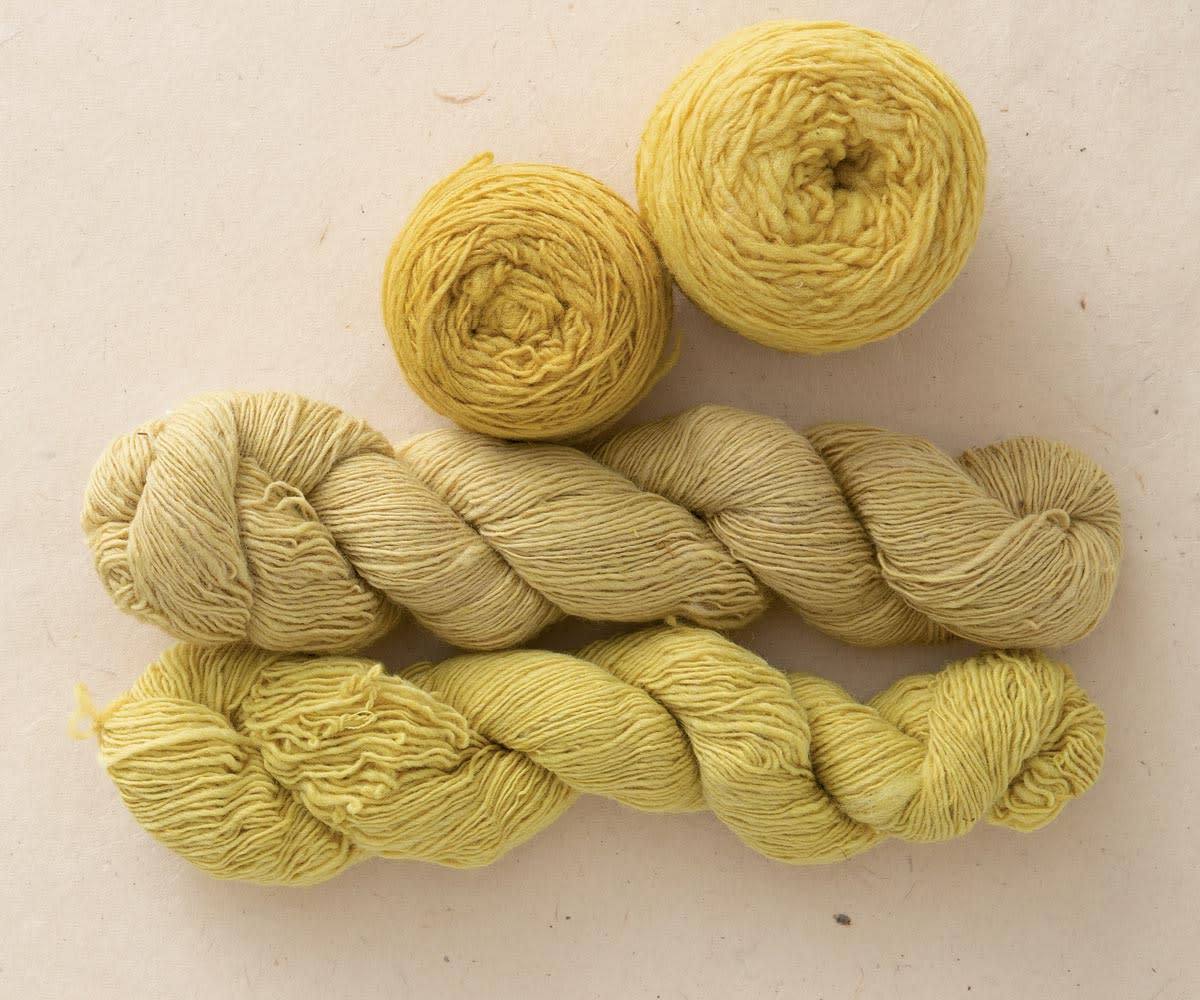 Yellows from buckthorn leaves on wool.

Yellow is probably the easiest of all the colors to dye. You can get yellow from the green leaves, green berries, or bark. It’s as easy as collecting a bunch of leaves, throwing them in a pot of boiling water, and adding yarn or fiber mordanted with alum. The leaves produce a very clear bright yellow. The more leaves you use in the dyepot, the more intense the yellow produced. In my experience, green berries have yielded more of a butterscotch color. I have not tried dyeing with bark and water (without other reagents), but I have read that a yellow can be produced that way as well.

Where I live, glossy buckthorn will leaf out earlier than most other trees, and it often keeps its leaves for longer than other trees. This provides a substantial window for collecting leaves for dyeing. I have not tried freezing the leaves and then dyeing with them, but based on my experience with frozen berries, I would be surprised if frozen leaves didn’t dye almost as well as fresh leaves. 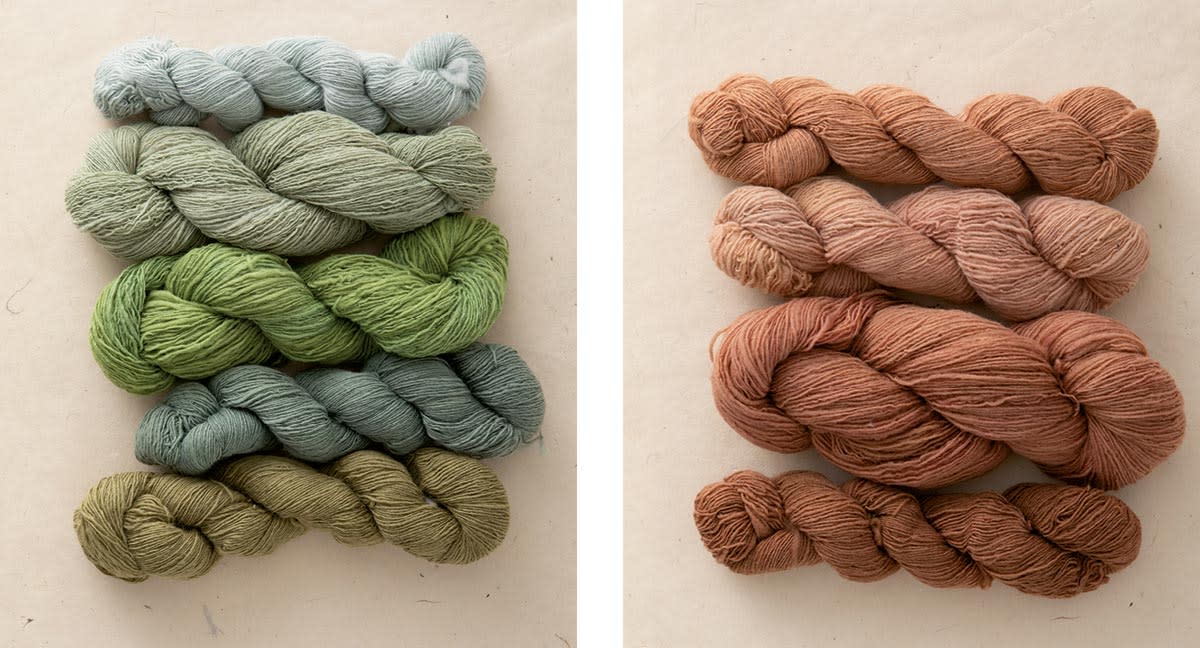 Green is also an easy color to get from buckthorn. The plant’s berries turn from green to red to blackish-blue. To get green, you want to collect berries when they have fully ripened to blackish-blue. Glossy buckthorn produces ripe berries from July to October where I live, with the fruit ripening continuously over this period, so there is a large window for collecting. Berries can be frozen and used at other times of the year.
Dyeing with the berries is as simple as adding them to water in a dyepot, bringing it to a boil, and adding alum-mordanted yarn or fiber. Buckthorn green has proven to be lightfast and washfast, which is unusual for color from berries.

Pink or a rusty red color can be produced from buckthorn bark. The bark contains tannin, which acts as a mordant, and no other mordant is required to dye yarns and fibers. The process I use for dyeing with bark is a fermentation bath, which uses an alkaline solution to extract the dye over time. The recipe included here uses fresh bark, which can be collected at any time of the year. However, the bark is easily dried and saved for later use.

When I discovered that I could get a green dye from buckthorn berries, I couldn’t help thinking that where there was green, there must be blue and yellow. Blue is a notoriously difficult color to achieve with natural dyes, particularly natural dyes that you forage or grow yourself. Since almost all parts of buckthorn will give a yellow color, I theorized that it was the skins of the buckthorn berries that must be providing the blue, which mixed with the yellow-producing guts and seeds of the berries to give green.

I experimented by squeezing out the insides of the berries and using just the skins for dyeing; I got blue on my first try. As I tried to scale up the experiment and increase the volume of berry skins and fiber, I lost the blue and ended up with green. After many tests, I found that there were a couple of variables that seemed to affect the intensity of blue dye. First of all, higher temperatures correlated to greener results. However, some level of heat is required. The second variable seems to be timing of berry collection. My best blues were achieved from berries collected early in the season.

I’ve enjoyed exploring different methods of extracting color from buckthorn. These invasive plants hold a rainbow of color for us to explore. Collecting buckthorn allows us to create vibrant local color and benefit our landscape at the same time.

A Bit of Buckthorn History

Although common and glossy buckthorns are considered invasive plants in North America, in Europe and parts of Asia, they are native plants and have long historical use. In researching buckthorn dyes, I found that buckthorn berries were commonly used for making lake pigments used for paint or ink. Krista Vajanto’s scientific research on Iron Age archaeological samples from Finland has shown evidence of the presence of buckthorn-bark dyes giving red color. Subsequent articles show that buckthorn-bark dyes actually make the yarn stronger than undyed yarn (see Resources). 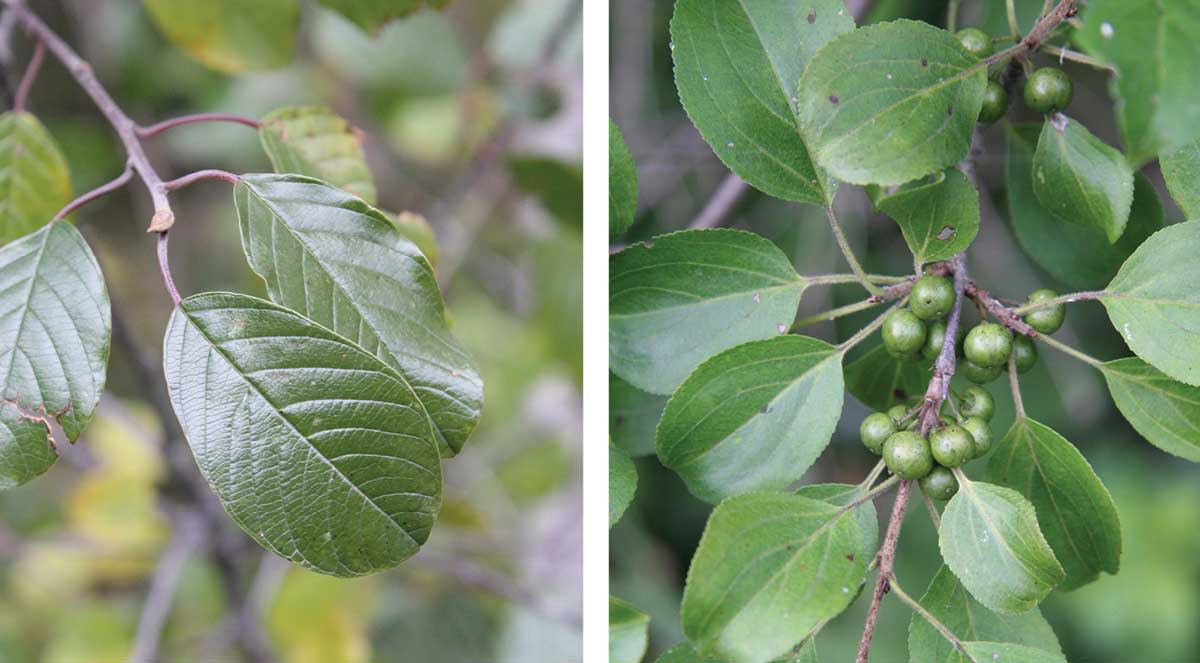 Left: Glossy buckthorn (Rhamnus frangula) is a large deciduous shrub that has glossy leaves, no thorns, splotchy bark, and berries that turn from green to red to blue-black. It is native to Europe, Asia, and Northern Africa, but is considered an invasive plant in North America. Right: Common buckthorn (Rhamnus cathartica) is a small deciduous tree with leaves with toothed edges, long thorns, and black berries. Unlike the glossy buckthorn, common buckthorn berries change from green to black with no red stage in between and all ripen at the same time. The bark, when peeled from the tree, is orange. Photos by Cindy Craft

I often use berries collected during the summer that are frozen until I am ready to use them. Label stored berries so they are not consumed—buckthorn berries can have a strong laxative effect.

For this recipe, I think the temperature of the dyebath when the fiber enters it plays a part in the color you get. My hypothesis is that a higher temperature will give colors toward the yellow end of the spectrum, and lower temperatures will give colors toward the blue end of the spectrum. Another interesting thing about this dye process is that as you pull the wool from the dyepot, it will look blue; as the liquid from the dyepot drains off the fiber or yarn, the color shifts to green. 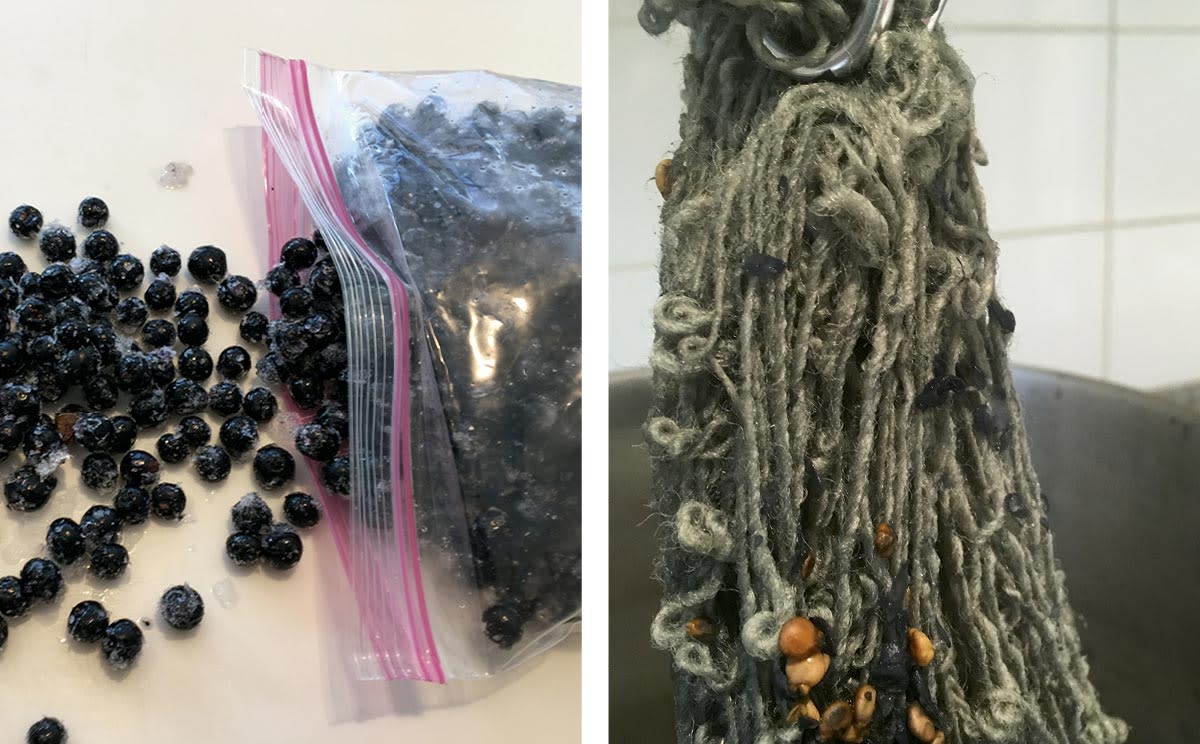 Left: Buckthorn berries are easily frozen. Right: Buckthorn green as it is pulled from the dyepot. Photos by Cindy Craft

The color in buckthorn bark is released in an alkaline solution. Alkaline solutions have a reputation for destroying wool, with effects ranging from making it brittle to actually dissolving it. After experimentation at medium heat, low heat, and no heat, I found that I got the best color with no heat over a fairly long period of time. I also discovered that a very alkaline dyepot with no heat doesn’t seem to damage the wool in any noticeable way. Buckthorn bark has tannin in it, so a mordant isn’t required.

Left: Bark from the common buckthorn will have a green layer and orange layer when peeled. Right: After adding washing soda, the bark bath will change to a wine color. Photos by Cindy Craft

I knitted this sweater a couple of years ago to illustrate the range of colors you can achieve from buckthorn. From top to bottom, the stripes are dyed from buckthorn bark (pink), buckthorn berry skins (blue), buckthorn berries (green), and buckthorn leaves (yellow). I used handspun Polled Dorset singles on a flatbed knitting machine. The sweater is machine-knitted from hem to armholes and then handknitted in the round from the armholes to the neck. 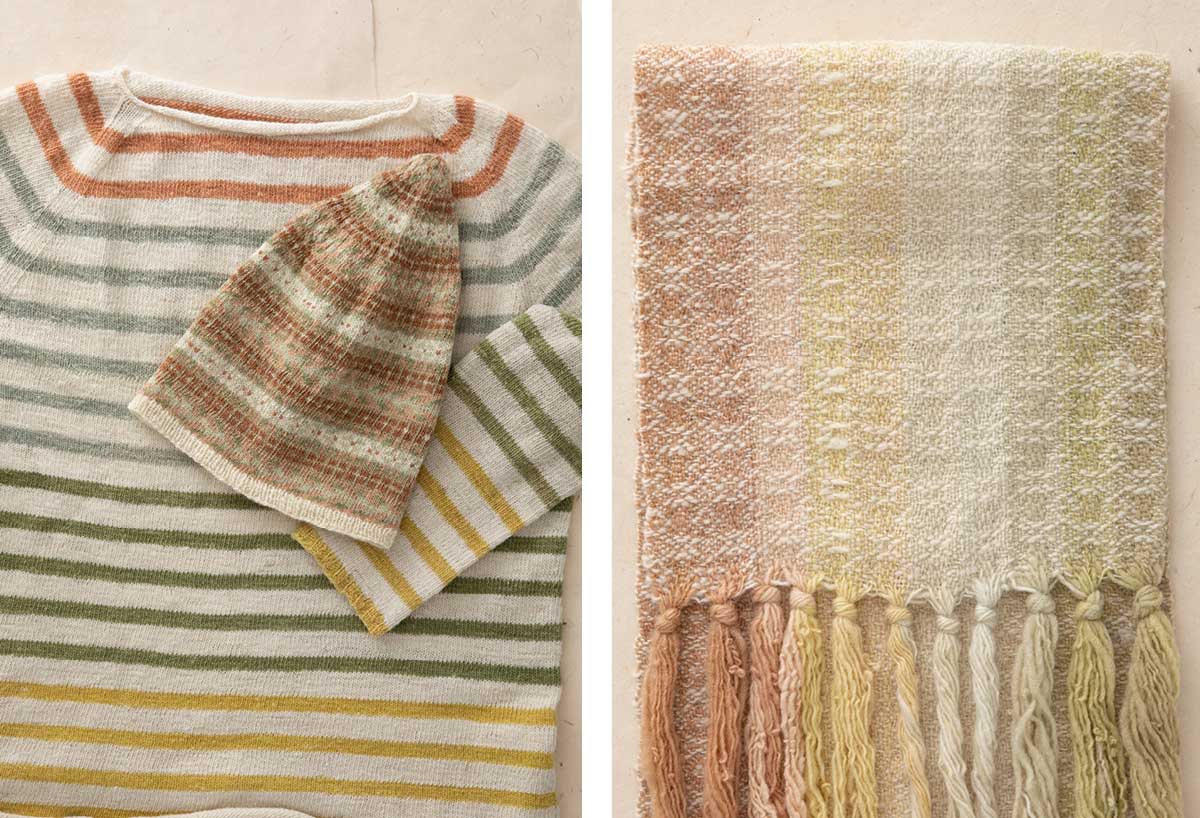 The hat is knitted from two shades of buckthorn-berry green, two shades of buckthorn-bark red, and white undyed wool. As with many natural dyes, buckthorn dyes and shades are difficult to repeat exactly. Berries in particular can give greens that range from olive green all the way to blue-greens and everything in between. The colors from buckthorn dyes lend themselves well to Fair Isle patterns. The hat was made using handspun Polled Dorset singles on a flatbed knitting machine to the decreases and then finished by hand.

My daughter wove this piece during a textile class. The warp is Polled Dorset singles in a series of colors from buckthorn: two shades of red from bark, two shades of yellow from leaves, and three or four shades of green from berries. The weft is the same yarn, but undyed. Some of the greens in this piece have faded.

Cindy Craft is a spinner, knitter, knitting-pattern designer, felter, cranker, and dyer among other things. Cindy and her daughters are the team behind Subito Farm. You can find them at www.subitofarm.com and at fiber shows throughout the East Coast states.