Exploring Natural Dyes: A Wealth of Color from Your Compost

Learn how kitchen scraps and yard waste yield a rainbow of hues.

Samples dyed with avocado. The original color was altered with modifiers. Photos by Dr. Annamarie Hatcher

Many handspinners avoid exotic, processed plant extracts and powders shipped from other parts of the world because they have found that nontoxic dyestuffs from backyards or kitchen waste bins provide a wealth of options for coloring wool. Feel good about these free dyestuffs; using them to dye wool is an exercise in environmental responsibility.

It is likely that natural dyeing techniques developed as a by-product of the daily preparation of food and drink. Because many plant dyestuffs have medicinal qualities, the treatment of minor wounds may have spearheaded the discovery of some types of dyeing. For example, as early as 2500 BCE, the leaves of two of the most important dye plants, woad and indigo, were traditionally used to treat skin ailments.

If you think “onion skin” when I mention compost dye, then you are with me. Onion skins with a food-grade mordant (the compound that helps stick the dye particles to the fiber), such as alum (which is sometimes used for making pickles), are a standard go-to dyestuff for coloring your yarn a rich yellow or gold.

Here are some of the many options for exploring and extending the value of food and yard discards. Use the following methods to extract color for the dyebath: 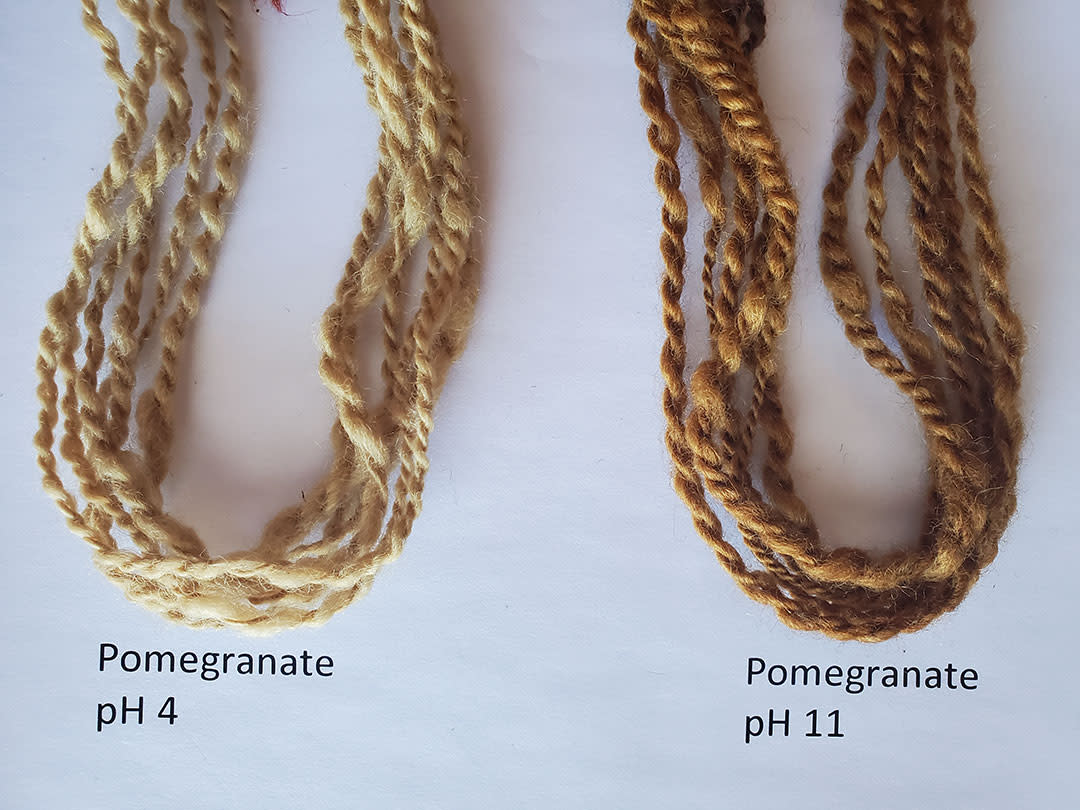 Samples dyed with pomegranate. The original color was altered with acidic and alkaline modifiers.

These examples only touch the tip of the iceberg. By taking the next step with modifiers, you can get an assortment of other shades. The modifiers that I have found most exciting are two that change the pH of the dyebath. Acidic modifiers, such as vinegar, lower the pH and often make colors more yellow in tone. Alkaline modifiers, such as washing soda, increase the pH and often produce a richer pink tone. Color-indicating pH strips can be sourced through your local aquarium store to test pH.

I knit a neck warmer that I lovingly call the Lasagna Cowl because the colored layers of handspun yarn were dyed with onion skin and oregano discards from an Italian cooking experiment. 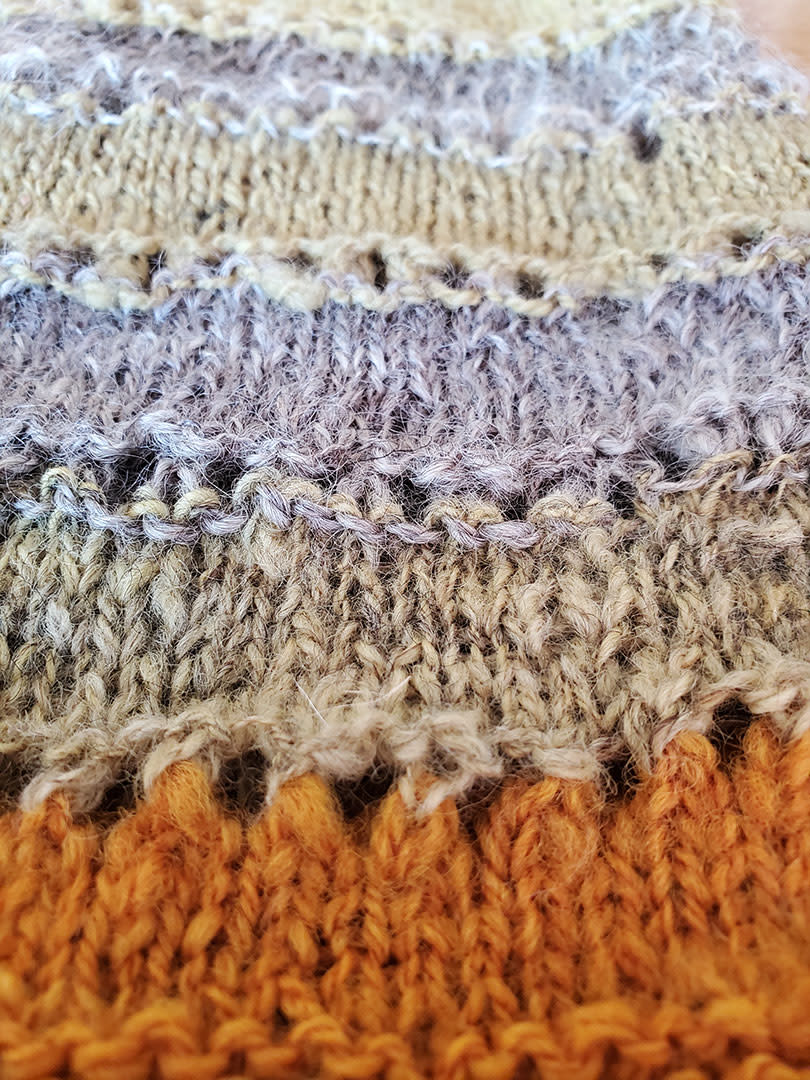 Detail of the Lasagna Cowl, showing the range of colors Annamarie achieved.

I pre-mordanted the handspun skeins by simmering the two-ply wool yarn for one hour in 8% alum and 7% cream of tartar, which was pre-dissolved in a bit of hot water (see Resources), per weight of goods. The pre-mordanted skeins were then introduced to a cool dyebath, which was slowly warmed to 90°C (194°F), maintaining that temperature for one hour. Next, the bath was cooled and left overnight. The skeins were then removed from the dyebath and either rinsed in pH-neutral filtered water or introduced to a cool bath with a pH modifier. The acidic baths were made with two cups of cool dye liquid plus one tablespoon of white vinegar. The alkaline baths consisted of two cups of cool dye liquid and one tablespoon washing soda that I first dissolved in small amount of hot water. The skeins were left in these modified baths overnight at room temperature and then removed and rinsed.

Compost dyeing leads to a certain sense of accomplishment. The end product is a richly colored skein of yarn, which can be transformed into a one-of-a-kind piece of clothing, dyed with waste that was destined for the worm pit.

Dr. Annamarie Hatcher has spent 43 years as a casual handspinner and two as an engaged student in the Master Spinners program at Olds College, Alberta, Canada. She has learned a lot about the local plants as indigenous medicines and as dyestuffs through her work as a science journalist. Thank you to Barbara Kelly-Landry for the use of her original Lasagna Cowl pattern.