A trip to learn about how Tom Knisely grows and spins flax narrowly avoids catastrophe and ends with some amazing yarns (of all kinds).

Last August, I traveled to south-central Pennsylvania to Red Stone Glen, the fiber arts center owned and run by Tom Knisely and his daughter, Sara Bixler. I was there to tape two new workshops, including one on weaving with linen. To say that it was a challenging shoot is an understatement. Our videographer became quite ill en route and spent the week in a hospital 200 miles away (along with all his equipment); our backup videographer had great cameras but no lighting setup. It was 102 degrees outside and rained so much that we had flood warnings the first two days. During the shoot, I learned three very important things: Tom is a remarkable host who handles any setback in stride; pillowcases can work as lighting baffles; and flax and linen are really, really cool.

The plan was to start filming in the small flax field Tom had planted that spring. Alas, it was a very small field, and someone had driven a car over Tom’s flax the week before we arrived. Tom harvested what remained, placing it in a plastic bag from Target. Our cameraman filmed b-roll of a praying mantis. We all felt a little bummed. The heavens opened, and we fled indoors.

When the sun finally re-emerged, we were ready. Before you can weave with linen, you need linen yarn, and making that yarn takes a lot of work. Flax was an important crop in America until the cotton gin ruined everything, and most households would have had handspun, handwoven linen items in daily use. For the video, we wanted to show how flax would have been manually processed and spun into yarn prior to actually weaving with it. Tom has long collected antique tools, and we had a flax break, scutching board, and hackles ready to go. 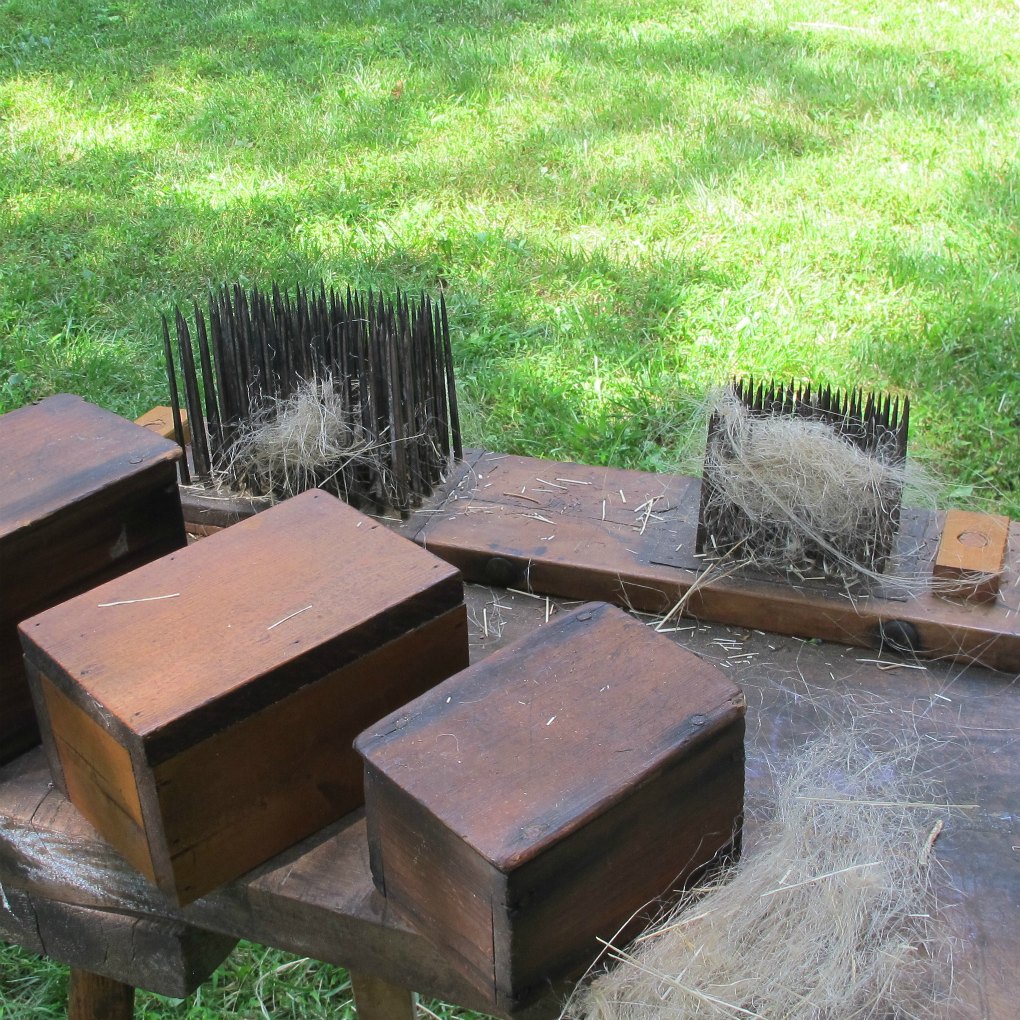 What followed is an epic portrayal of turning flax into linen thread. It’s a messy and exhausting business: all the woody bits, called “boon,” need to be separated from the flax fibers in order to produce spinnable fiber. In the video, Tom ripples, breaks, scutches, hackles and basically mauls flax plants into finer and finer fiber, ending with something akin to a horse’s tail. The best fibers—line flax—can be more than 2’ long. But the drama doesn’t end there. Tom shows how to properly dress a distaff and then spins that flax into a smooth thread so fine that it’s almost invisible—and that is not an exaggeration. We struggled with cameras and lighting for quite some time so you can actually see the thread that he spins.

The remainder of the video is devoted to weaving, but if you have any interest in working with flax, Weaving with Linen is a great resource. Tom was a spinner before he became a weaver, and his understanding and appreciation of fiber shine through all his work. Watch a quick profile of him below: