Mushrooms, leaves, insects, roots, and wood are just waiting to give you a rainbow of dyes if you know the magic recipes to coax them out.

It still mystifies me that Mother Nature hides so much natural dye in plain sight. Mushrooms, leaves, insects, roots, and wood are just waiting to give you a rainbow of dyes if you know the magic recipes to coax them out. Many fiber artists now rely on synthetic dyes, but the faithful colors of nature are still ready for us.

Humans have perfected the art of using plant dye (and insect-based, in the case of cochineal) for millennia. Today’s crafters have the choice to use natural or synthetic dyes, and the appeal of natural dye is returning. Cindy Craft decided to explore the hues of her neighborhood in “A Bit of Local Color” in Spin Off Winter 2017. “I began thinking about naturally dyeing my locally sourced wool. Wouldn’t it be cool, I thought, if I could make a garment that was produced completely locally?” she says. 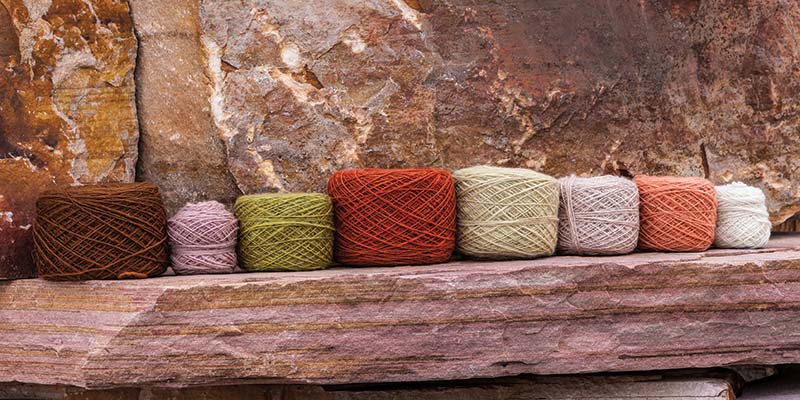 A variety of natural dyes from Cindy Craft’s garden. Photo by Joe Coca

1. They look good together. The colors created by natural dyes tend to be harmonious; a collection of naturally dyed yarns in any arrangement of hues usually looks good.

2. What you see is definitely not what you get. Why should avocado peels provide red dye while pomegranate gives green? Logwood, pernambuco, and osage orange all look pretty woody, but fibers dyed with their shavings emerge purple, red, and orange, respectively.

3. There’s a little alchemy involved. Science can explain the process of indigo dyeing, but reciting an incantation over the vat can’t hurt. How could a sea-green dye bath yield yarns that turn blue before your eyes? (OK, fine. Oxygen and electrons.) 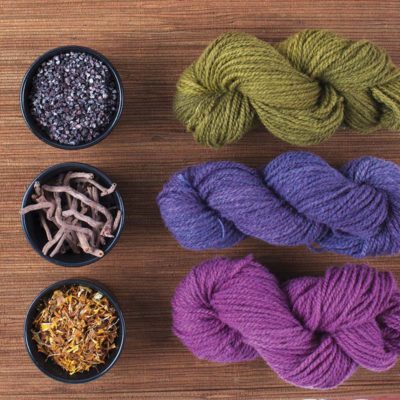 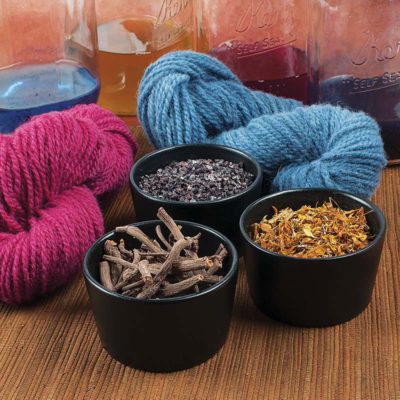 Natural dyes have a reputation for producing muted hues, but they can be vivid if used skillfully.

5. Cochineal—made from insects—is still everywhere, including food and makeup. Synthetic dyes have replaced natural in many places, but because cochineal is food-safe (except for rare allergies), it’s probably what makes your lipstick and artificial crab and yogurt pink. The dye comes from carminic acid, which is extracted from the insects and is often labeled as Natural Red 4.