Her Handspun Habit: Spindle to the Rescue

My handspun is my muse, and I am forever seeking the best application for my latest spins.

Five years ago, I moved into my apartment with my child and a hodgepodge collection of boxes, the contents of which amounted to basically nothing at all.

It’s a period of time in my life that I don’t care to dwell upon, save for this one vital element: Right after I moved here, I picked up two top-whorl spindles a friend had loaned me and put them to use. Day and night for the next year and a half, I spun. It was the only thing I could bring myself to do in those dark months. These were the days and nights during which I taught myself to spin, and spinning healed me.

I created some exquisite yarn back then, and I did it all using one of those on-loan spindles.

Had my life not gone completely haywire, had I not then remained cooped up in my apartment for such an extended period of time as I tried to heal both physically and emotionally, I would never have learned to spin, and I therefore would never have eventually come to the decision to merge my writing and spinning careers.

My life would bear no resemblance to the one I live today: boundless, content, joyful, and supported only by those who believe in me. A simple wood spindle helped me heal enough to push forward once again, to be the mother, the writer, the friend, and strong self I was meant to rediscover. 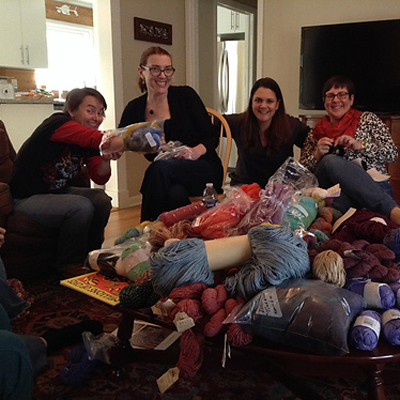 Practically speaking, I have become a far more patient and skilled knitter, and now, a new weaver. I find myself with an endless list of ideas I’d like to explore in terms of handspun and its effects on finished fabric, both knit and woven.

My handspun is my muse, and I am forever seeking the best application for my latest spins.

I’ll be back here sharing my current handspun-only works-in-progress and/or finished objects, as well as offering photos and information relating to my upcoming intentional spinning plans. I promise to be honest with my results and any lessons learned along the way.

Here’s to having no regrets! I think I’ll celebrate my own anniversary by casting on something special for myself. (I’ll let you know what that is in two weeks’ time!)

I hope you will join me both in my future fiber experiments and in conversation. You can find me in the Spin Off Ravelry group, where I am doodler01.

DEBBIE HELD is a freelance journalist who chose full-time spinsterhood after an extended illness. She lives in the Atlanta area with her wool, her wheels, and her 14-year-old Italian greyhound, Iggy. They may be reached via Debbie’s website, www.debbieheld.com.