Electric Eel wheels offer an affordable way to get your hands on an e-spinner. Made mostly of plastic, these wheels are lighter than many of their counterparts and easy to travel with. How does the purse-sized model stack up to a tabletop style?

Madeline shares her thoughts on spinning with the EEW 6.0 (top) and Nano (bottom). Photos by Madeline Keller-King

My first introduction to Dreaming Robots’ Electric Eel wheels was when I saw a woman spinning on a Nano while staffing an information table at a quilt show. I had to talk to her! Fascinated by the tiny wheel and always happy to talk to a fellow spinner, I got all the details and ordered one for myself shortly after.

Recently, Dreaming Robots released their latest full-sized e-spinner, the EEW 6.0. Spinning on both of them is an opportunity to think about what decisions a spinning wheel designer makes when producing two very different models. While some of the differences between the Nano and the EEW 6.0 are fairly obvious, not all of them may be at first glance. And it’s not just a question of size—comparing the two models reveals some important factors in choosing an electric spinning wheel.

The most recognizable difference between the two wheels is size. You may think of size primarily in terms of how much space it takes up or how heavy it is to haul around, but the size of the spinner sets the size of the bobbin, so you should decide what you want to spin before choosing a wheel. A smaller bobbin might be well suited to spinning very fine yarns (but make sure the motor will produce the quick rotation needed for fine yarn). A larger bobbin is better suited to holding a bigger quantity of plied yarn.

As the name implies, the Nano is a mini-spinner. The entire wheel fits into the palm of my hand and weighs only 1.4 pounds. The tiny bobbins hold between 1 and 2 ounces of fiber. I don’t ply yarn on the Nano, but the bobbins do fit on the lazy kate for my Schacht wheels, which I ply on instead.

The EEW 6.0 is an entirely different beast; it’s much larger than the Nano, weighing in at 5.5 pounds. The bobbins hold 8 ounces of fiber, which puts the EEW 6.0 bobbin capacity around the same as the jumbo flyer and bobbins for my regular wheel. It also has a larger orifice, which you’ll need to spin thicker or slubby yarns. 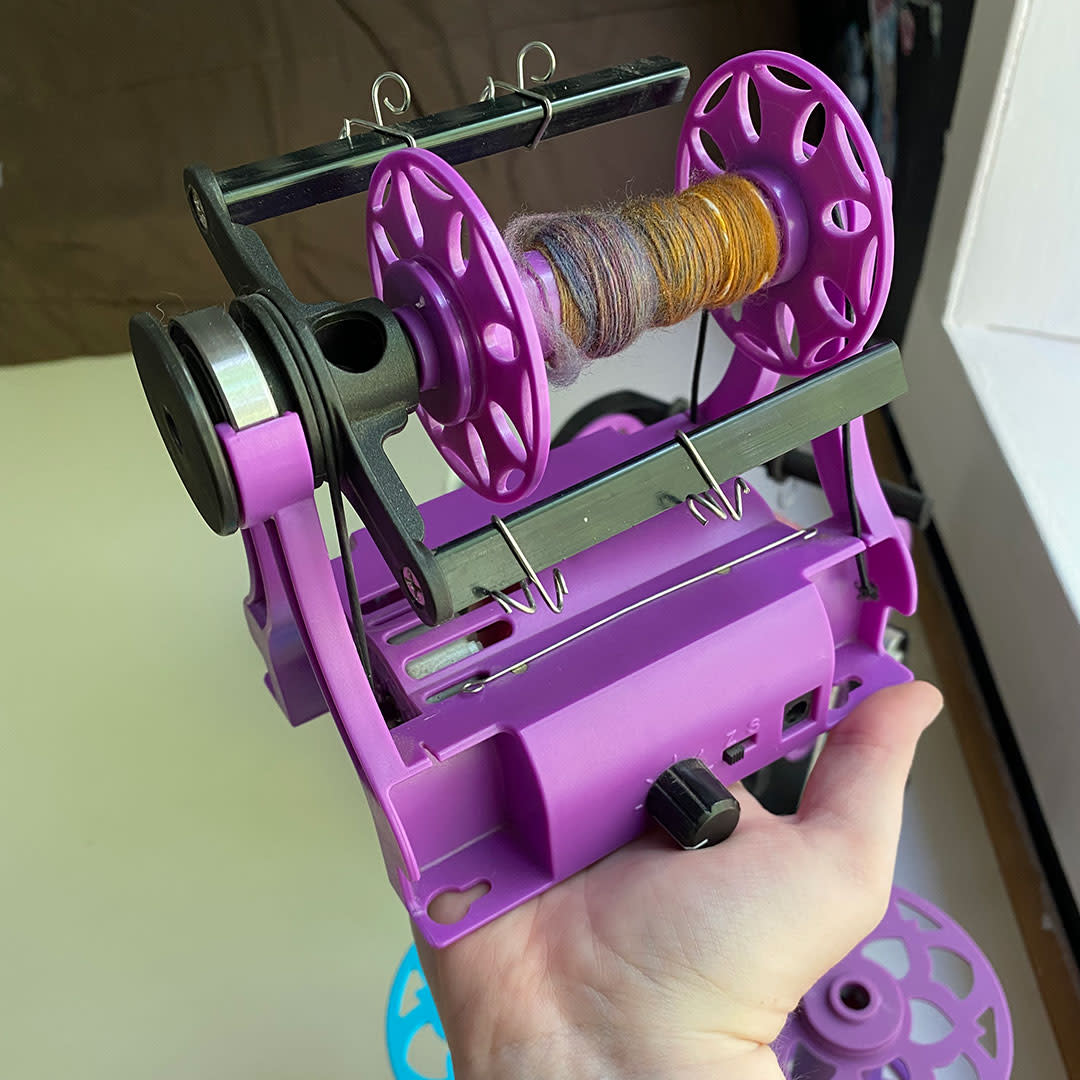 The Nano fits in the palm of Madeline’s hand.

Most electric spinning wheels operate only with Scotch tension, but even within that classification, there are different mechanisms for the brake band. The tension system for these two wheels is different. The Nano uses an elastic band over the end of the bobbin, Scotch-tension style, relying on the stretch in the band to set how much drag it adds to the bobbin. This does work; however, adjusting it isn’t very intuitive. Making minor adjustments this way can be a bit fiddly, and it’s easy to loosen when changing out bobbins. You have to slide the band out of the notch that holds one end, tug it to the tension you want, and replace it. The EEW 6.0 uses a more traditional Scotch-tension system, consisting of a cotton cord on a spring with a knob to adjust, just like on a standard wheel. It’s easier to adjust for quick take-up, which helps in spinning thicker yarns.

Another major difference between the two models is that the EEW 6.0 includes a foot switch while the Nano doesn’t. The Nano is set up with the on/off switch on the body, and it doubles as the speed dial. This means that every time you switch the e-spinner off, you lose your speed setting. The EEW 6.0 is set up either to run the same way as the Nano, or if you attach the included foot switch, it serves as your on/off switch, leaving the speed dial set. I live in a household where I sometimes need to get up from my spinning quickly, and I don’t always remember the setting I was using when I get back to spinning. While this is something you can intuitively re-set, it’s more convenient to just tap the switch with your foot and be back at the exact speed you were using earlier, especially on longer spins where you’re really concerned about consistent singles or plying. 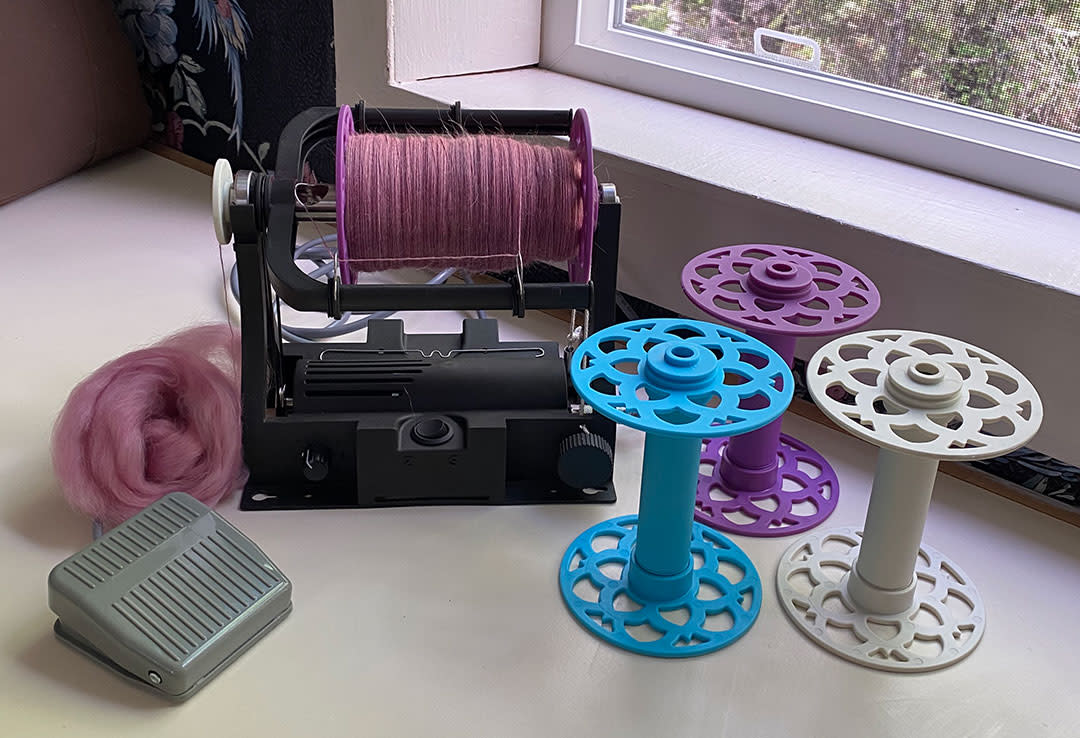 The EEW 6.0 comes with a foot switch and jumbo-sized bobbins.

One last difference between the two e-spinners is the guide hooks on the flyer. The Nano uses metal loop sliders that you have to pinch a bit to get them to move. This can be a challenge if you have any kind of pain difficulties in your hands and may cause the little e-spinner to slide or move if you don’t have it secured to anything or on a slide-resistant surface. Tip: I carry a small piece of drawer liner with me when I travel with the Nano. It works great to keep the e-spinner from moving on countertops or tables.

The sliding guide hooks on the EEW 6.0 move more smoothly and require no pinching. As far as stability goes, the EEW 6.0 weighs enough that I haven’t had any issues with it scooting across a surface.

So, which one is better? Honestly, I feel like that really depends on what you’re going to do with it. If you’re a spinner who loves to spin fine singles and doubts that you’ll need to ply while you’re traveling, the Nano may be just fine for you. I definitely still love mine and use it regularly. It’s hard to complain about such an affordable wheel that I can wrap in a scarf and stick in my purse when on the go. It is a novel little spinner, and the size of the bobbins makes it a perfect tool for spinning four-ply sock yarns, which I love. And while the motor on the Nano isn’t as impressive as the one on the EEW 6.0, it still goes fast enough to spin cotton.

The EEW 6.0 is clearly meant to be more of a production wheel, with giant bobbins and a much stronger motor. While not as compact as the Nano, it’s still a good size to ply and finish yarns on while I travel. Both of these wheels, like most of today’s e-spinners, are easier for me to take on the train than a conventional wheel.

When it comes to e-spinners, size does matter—but it’s not the only factor to consider when deciding on a new wheel.

Madeline Keller-King is an avid fiber artist and natural dyer living in the woods of northwestern Montana. You can find her work and adorable canine assistants on Instagram @woolywitchofthewest.