When it comes to bast fibers, extracting the usable fiber from the plant can take patience and practice.

Retted Caesar weed, a bast fiber that is an invasive species in Central Florida. Photo by Matt Graves

Most spinners have wild plants—natives, invasives, or maybe both—growing in their region that can be processed into spinnable bast fibers. Depending on your climate, you might have plants such as nettle, flax, mulberry, milkweed, linden, or Caesar weed growing nearby. Some are considered weeds by many people, which just gives us spinners further encouragement to make use of this wild fiber stash!

When it comes to bast fibers, extracting the usable fiber from the plant can take patience and practice. Retting is a common method of extraction that uses controlled decay to remove some of the plant matter, revealing the long, silky bast fibers within.

I began a project exploring the effects of different retting variables, such as time and light, using Caesar weed (Urena lobata), a bast fiber that is invasive and abundant where I live in central Florida. This now-wild plant was introduced to the United States for its fiber, which is strong and lustrous like flax and can now be found in warm regions in much of the country.

“The source for bast fibers, including flax, lies within the stem of the plant. Fibrous structures run the length of the stem, transporting food to and from the leaves and roots and giving the stem flexibility and strength. Bast fibers are the phloem, thick-walled tubes that grow just beneath the bark.” —Stephenie Gaustad, The Practical Spinner’s Guide: Cotton, Flax, Hemp (Interweave, 2014)

Left: Karlissa bent the branches before retting, which resulted in some shorter and some longer fibers. Right: Retting tub with branches fully submerged. Photos by Karlissa Keller

What Is Urena Lobata?

Caesar weed. Aramina. Bun ochra. Hibiscus burr. Whether you call it a pesky weed or fiber resource, Urena lobata is known by many names. Although the origin of the plant is unknown, researchers speculate that it came from a tropical region of Africa or South Asia.

Today, as in the past, Caesar weed is grown primarily for its long bast fibers, found between the thin outer bark and the woody core. These fibers are most often grown as a substitute for jute or hemp.

Introduced to Florida in the late nineteenth century for making burlap, it promptly escaped and has been an invasive ever since. In the United States, Caesar weed grows in Alabama, California, Florida, Hawaii, Louisiana, and South Carolina. However, it could be grown as an annual instead of an invasive perennial in any state with suitable growing conditions for at least part of the year. In favorable warm and wet conditions, this plant grows, as they say, like a weed.

As Urena lobata is currently on several states’ noxious weeds lists, never plant or scatter seeds anywhere that the plants can’t be contained. Instead, I suggest doing as I did and gathering what you need from your local infested park after securing permission. You will be doing your bit for your local environment and collecting a fiber supply at the same time. With its dime-sized, light-pink, hibiscus-like blossoms; distinctively shaped, rough, fuzzy leaves; and not-to-be-forgotten seedpod burrs, this plant is easy to recognize.

I began by harvesting living stems that were about as tall or taller than myself (5 feet, 3 inches). I left the bundle in the sun for a day or so by accident, which had the happy result of drying all the leaves so they fell off with a gentle but thorough brushing.

The seedpods were more troublesome and are what earn this plant its fearful reputation. Do these seedpods stick to your socks and any other exposed fabric? Yes. Do they damage any delicate fabrics they come into contact with? Possibly. Draw blood? No. The little barbs covering the surface of the pod stick out in all directions and are rough but no sharper than the hooked side of Velcro in my experience. To avoid the complication of seedpods, cut the plants while they are in full bloom but before they have gone to seed. 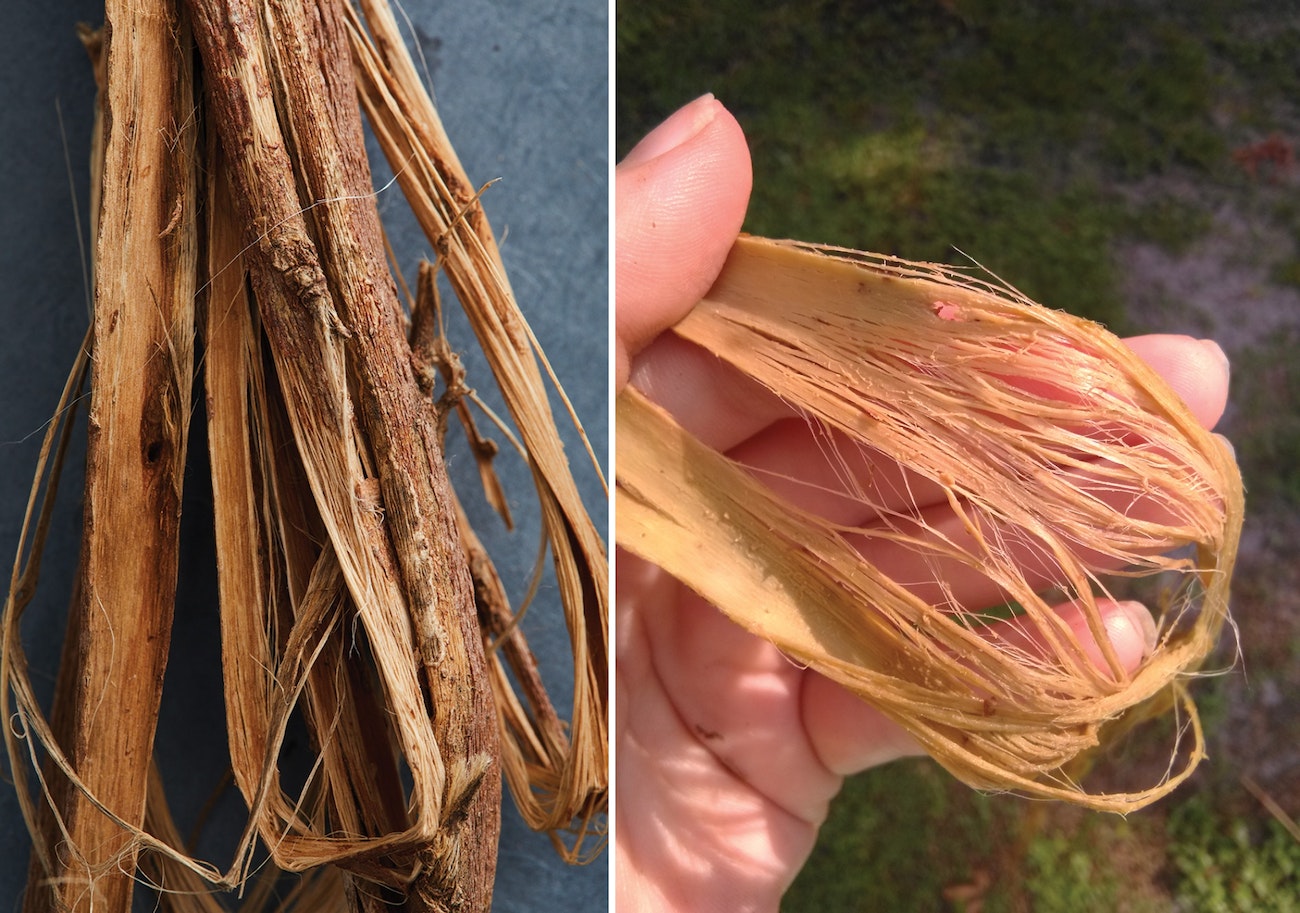 Left: After retting for only nine days, the fibers are just beginning to be released from surrounding plant matter. Photo by Matt Graves. Right: As the fibers peel off the branch, they have a beautiful lacy structure. This sample is nearly done retting. Photo by Karlissa Keller

My goal was to ret the plants long enough for the bast fibers to be loosened from surrounding plant matter and allow them to be cleaned further, but not to allow the retting to go too long so that the bast fibers themselves would begin to decay. Retting relies on microbial activity, so it is impacted by temperature, moisture, and the amount of time the plants are exposed to retting conditions. Where I live in Florida, winter and spring are the perfect times to process bast fibers, as the cooler temperatures help control the microbes that are doing all the heavy lifting and keep unwanted insects at bay. The retting for this project took place from April 22nd to May 17th. Temperatures usually ranged from highs in the 80s and lows in the 60s (Fahrenheit). Several heavy rains cooled things off, but they didn’t seem to dilute the retting water too much.

I placed my retting tub—a 45-inch plastic kiddie pool—far enough away from foot traffic to be undisturbed and covered enough to be bug-free.

Most of my branches were longer than my 45-inch tub. I bent each one neatly in half, careful not to pull the two pieces entirely apart. This approach does break the fiber on one side of the branch, but the full length on the other side was preserved, allowing me to process some fibers that were much longer than my retting tub. This produced two bundles of shorter fibers (still 2 to 4 feet long) and one bundle of long fibers the full length of the branch. Cutting branches exclusively to fit in the retting tub would have been another option and would still offer long bast fibers.

After removing the leaves, seeds, and flowers, I submerged the stems in my retting tub with some stones placed over strategic branches to hold everything under the surface of the water.

About every nine days, I processed a sample of the fiber. To do this, I selected a stem, carried it out to the lawn, then rubbed off the slippery slime that results from rotting vegetable matter (in this case, bark). I rinsed each one, either while I was removing the majority of the gunk or after. Then, I peeled the fiber away from the woody core underneath, trying to pull it off in the largest cohesive bundles I could manage. For good measure, I gave the loose fiber another rinse before setting it out to dry in a partially sunny spot.

Because I initially left the smaller twigs on the stems, I had to work around these when removing the fiber later. Early on, I found that the shorter twigs did not contribute enough length to the final fiber length to justify working around them (and when they did, the fiber usually broke off at the node where the smaller branch met the main stem). I used a pair of pruning shears to remove all the small twigs from the first sample branch, making it much easier to loosen and remove the fiber.

By the time I took the third sample, the retting had begun to affect the woody cores of the plants as well as the outer bark, so most of the twigs ripped off with a little pressure at the fork where they met the main branch, then slipped neatly out of the surrounding fiber. It was then much easier to remove every last bit of retted plant matter by just running a hand down the branch.

For the best and easiest-to-remove fiber under my retting conditions, I found that two to three weeks was the right amount of time. I also found that allowing the fiber to dry in place on the branch was helpful. When I removed the branches, I rinsed off every bit of retting gunk from the de-twigged plant stem, leaving the fibers in place, and let the branch and fiber dry in the sun. Then, I removed the fibers after they had dried on the stick. This method produced a beautiful bundle of fine, lustrous fibers that I could have almost removed one-handed, they came off so smoothly.

The fiber was just as fine as the flax I have in my fiber stash and even slightly more golden in color. With a hackle and evenly dressed distaff, I suspect this fiber would spin like flax or hemp into beautiful threads. However, in keeping with my “wild” experiment, I pulled out my favorite top-whorl spindle and handcards.

Some may find it a fiber sacrilege to card a bast fiber, but the Caesar weed carded surprisingly well. I experimented with drawing handcards through the dried fiber and found that the process broke some of the longer fibers into consistent sizes, a couple of inches long, which were perfect for handcarding. I had loosely rolled—but very fluffy—rolags in just a few minutes. As I spun a small proof-of-concept sample size, I broke the thread once in a very thin spot that was overspun. With even consistency and better twist control, this promises to be a good, sturdy fiber. I loved processing and producing this wild handspun yarn and will next try using hackles and a distaff to do this unusual fiber justice! 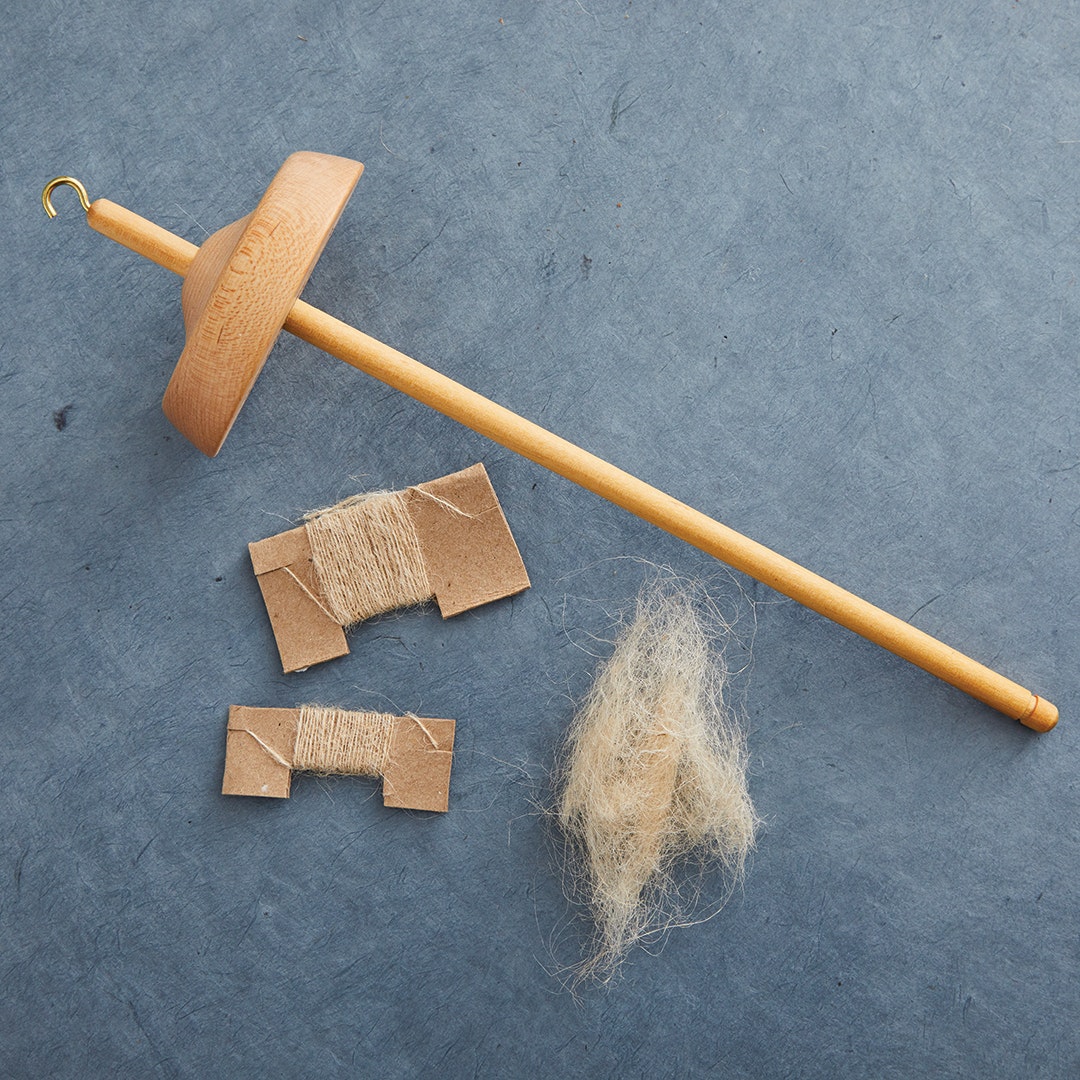 Karlissa used a Schacht Hi-Lo as a high-whorl spindle to experiment with her finished fiber. Photo by Matt Graves

When foraging natural materials for any purpose, always educate yourself first, ask permission from landowners, and follow ecological best practices.

Try This at Home!

Tips for trying this in your own backyard:

Interested in learning more about wild fibers? This and other articles can be found in Spin Off Winter 2020.

Also, remember that if you are an active subscriber to Spin Off magazine, you have unlimited access to previous issues, including Winter 2020. See our help center for the step-by-step process on how to access them.

Karlissa Keller has been crocheting ever since her mother taught her at age seven and spinning since her parents gifted her with her first spindle right before college. The rest is history. She rarely travels anywhere without at least one spindle, a crochet hook, or both.