What happens with sheep that get separated from their flock and how do they survive in the vastness of the Australian Outback?

Sheila, still encumbered by her 22-kilogram fleece, stands beside a pair of Merino sheep with an average year’s growth. Photo courtesy of Angela Turvey, Twamley Farm

Several sheep from Australia and New Zealand have become media darlings when they were caught after several years without shearing. One ewe, Sheila, escaped shearing for approximately four years and had about 30 kilograms of wool shorn off. In Spin Off Summer 2016, _contributor Rebecca Marsh examined the phenomenon of Shrek, Chris, Sheila, and other ultrawooly ovines who evade the clippers for years and capture the imaginations of spinners everywhere. Read more in an excerpt from her article “Australia’s History of Lost Sheep.” –Spin Off Editorial Staff

To many Australians, it is probably not surprising that sheep become separated from their flocks and lost for a time. We take the vastness of our country and our cultural farming practices rather for granted, as the way things are. But for other folks, it might be helpful to provide a context for this phenomenon of the Lost Sheep.

It is not surprising that when large flocks graze largely unsupervised over vast, often rugged terrain the odd sheep is able to avoid mustering for a while. In fact, missing sheep are such a common occurrence that a farming term exists to describe the difference between the number of sheep a farmer expects to be in the flock and the number of sheep that are actually mustered. The missing sheep are “paper sheep.” A certain percentage of paper sheep is expected in traditional farming in Australia. 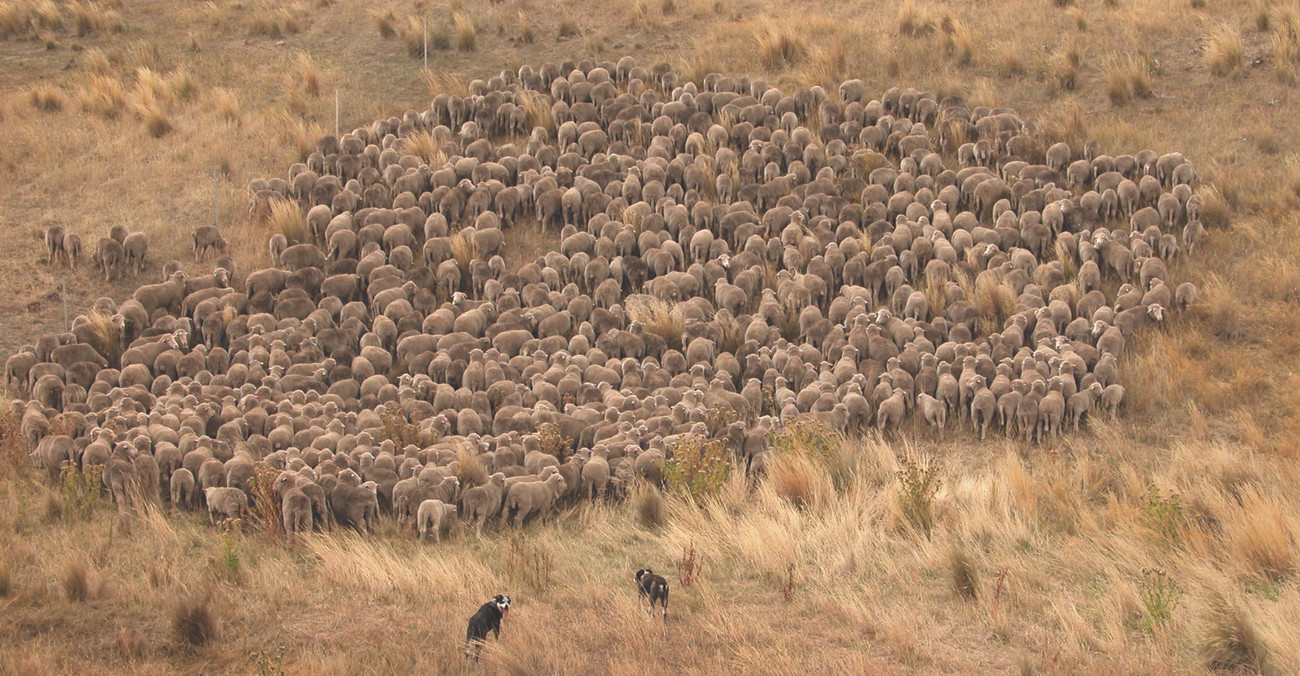 Mac and Chance watching over the flock. Photo courtesy of Nan Bray

What is perhaps more surprising is that the Lost Sheep survived for so long without regular health checks and shearing. Some of them wandered in the bush for upward of eight years. They survived parasites, snakes, wild dogs, falls, thirst, wool blindness (where the fleece covers the eyes), and fly-strike. Surviving fly-strike is perhaps the most extraordinary accomplishment. Fly-strike occurs when the maggots of blowflies attack a sheep’s healthy skin tissue. Untreated, it results in rapid death. Merino and Merino crosses are particularly susceptible with their specially bred rolling skin folds that maximize the surface area for fleece growth.

Surviving on their own

While more prone to fly-strike, Merinos may be most likely to survive being lost as they are uniquely adapted to survive and thrive in Australian conditions, says Nan Bray, owner of White Gum Wool, a Merino sheep farm and yarn business in Tasmania. Indeed, most of the lost sheep found recently have been pure Merino. Nan also speculates that the bushland diet of the Lost Sheep may have actually promoted their survival. Her whole grazing ethos is built around megadiversity of diet, which she argues is critical to the overall health of sheep.

Perhaps one of the reasons that we are so captivated by the Lost Sheep is that through their stories, we gain a glimpse of one sheep’s life. Unless we raise sheep ourselves, we usually only catch traces of the animal when we spin. We smell the life of them when we open a fleece bag. We find seeds, a dead beetle, or perhaps a dried bracken frond that hint to us of a life lived.

When we encounter stories like those of the Lost Sheep, the usually anonymous fleece we spin takes shape and forms an animal who has lived and who has wandered. Our fascination with the tales of these errant sheep connects us back to the life attached to the fleeces we spin. And isn’t that why we bother to spin at all, to make a connection with something deeper?

Rebecca Marsh is a spinner and knitter in Melbourne, Australia. In between shepherding children and chickens, she is undertaking postgraduate studies exploring the intersection of the contemporary handcraft resurgence and movements for ethical consumption and sustainable living. She blogs at www.needleandspindle.com.

Also, remember that if you are an active subscriber to Spin Off magazine, you have unlimited access to previous issues, including Summer 2016. See our help center for the step-by-step process on how to access them.