In 1941, a letter and a charkha traveled between Henry Ford and Mahatma Gandhi in the midst of the chaos of Pearl Harbor.

Portable spinning wheel [charkha] presented to Henry Ford by Mohandas K. Gandhi in 1941 (42.142.1) From the Collections of The Henry Ford. Gift of Mahatma K. Gandhi

The collections of The Henry Ford Museum are full of wonders, not only the automobile history that you might expect but a wide variety of American history and culture. Spinner and weaver Joan Sheridan volunteers in the conservation department at the museum, and she kindly arranged for Kate Larson and me to see some of the textile collection. Somewhere between the folk art quilts and sewing boxes, I realized that Kate had been looking intently at a charkha for quite a while. 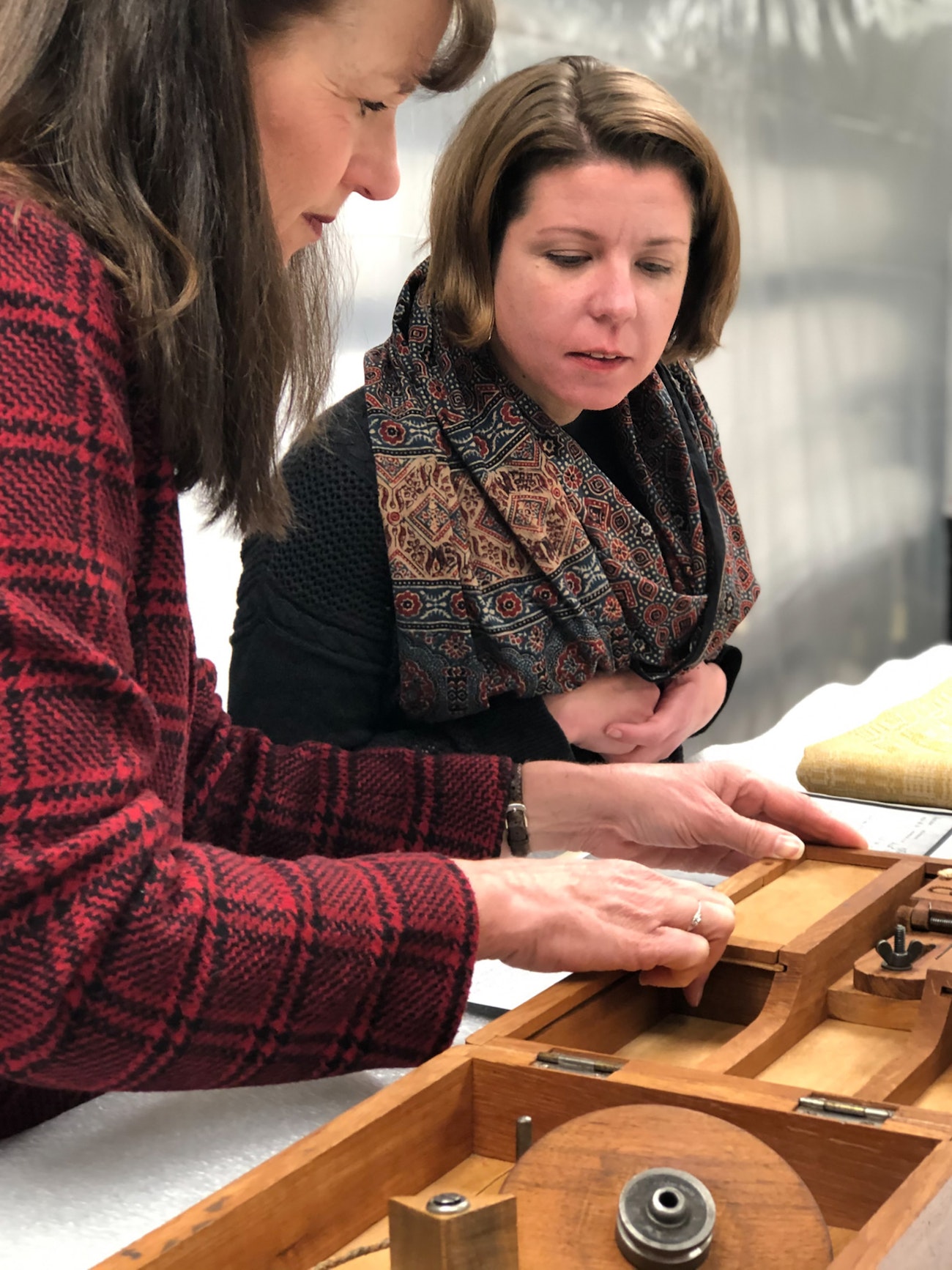 Jeanine Head Miller (left), Curator of Domestic Life at The Henry Ford, opens the charkha’s storage compartment to reveal yarn samples. Spin Off Editor Kate Larson does her best to look and not touch. Photo by Joan Sheridan, used with permission from The Henry Ford

The museum’s collection lists it as “Folding Portable Spinning Wheel Used by Mahatma M. K. Gandhi”, though spinners will probably recognize it as an attaché charkha. Seeing Kate’s interest, the conservation team opened it up to show the inscription in English and Hindi. In small compartments covered with sliding doors were cotton fiber and what we would recognize as a control card—a sample of singles wound on a card for reference. Cotton singles were wound onto one of the spindles. I got the impression that Kate would really have liked to take the cotton fiber in hand, turn the accelerated wheel, and remind the charkha what it had been built to do. (Of course, she did no such thing.)

The Ford’s Gandhi charkha is a lovely example of a folding charkha, but what struck me was how similar it is to Indian charkhas available today. You can open a million book charkhas throughout the world and find the same points where the wheels can be adjusted and oiled, metal disk that stops the singles on the spindle, and “mousetrap” with fiber bearings. The impact of the folding charkha wasn’t so different from the Model T: a transformational machine for the masses. 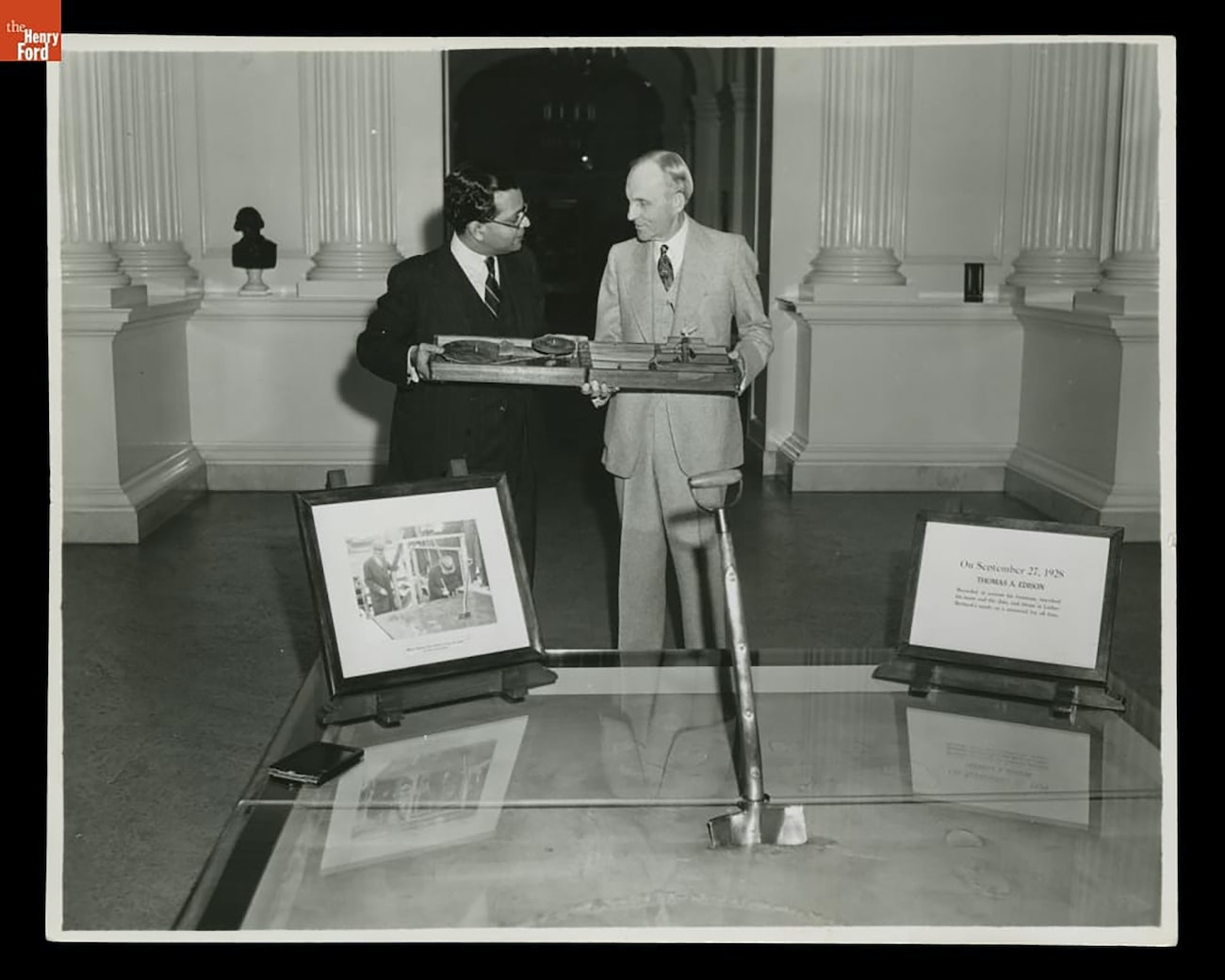 Mr. T.A. Raman Presents a Portable Spinning Wheel to Henry Ford, a Gift from Mahatma Gandhi, 1942. From the Collections of The Henry Ford. Gift of Ford Motor Company

Ford wrote Gandhi an admiring letter in 1941, asking United Press of India editor T.A. Raman to carry it by hand. Raman delivered the letter the day after the bombing of Pearl Harbor to a visibly moved Gandhi, and Raman asked whether he could bring Gandhi’s regards back to Ford in the form of a charkha. The boat that carried Raman back across the Pacific took a zigzagging route in hopes of avoiding submarine attack, and Raman asked the captain for special permission to take the charkha in a lifeboat in case of an emergency. You can read Mr. Raman’s typewritten account here.

To learn more about traditional Indian box and book charkhas and how to use them, check out our new course How to Spin on a Charkha with Kate Larson.