Today, Merino wool is plentiful. If you walk into any fine yarn or fiber shop, search the hundreds of online retailers, or visit a fiber festival, it’s not hard to find Merino combed tops and skeins. So it may astonish many modern fiber artists, but prior to 1801 the Merino breed was scarce in America and, in fact, in most of the world outside of Spain.

Australia is often what first comes to mind when I think of modern Merino sheep, but the Merino breed as we know it developed in Spain, where the sheep were closely guarded for their fine, highly prized wool. By the fourteenth century, the export of this luxurious fine wool was a booming business for the Spanish economy. In Sheep and Man, M. L. Ryder states, “At the height of the Merino’s importance, it was a capital offence to export the sheep, but the king was the first to break the law, sending them first to Sweden in 1723.” Occasional gifts of sheep were sent from Spain to the royalty of other nations, and attempts to smuggle out decent animals were documented, but there was no real export of Merinos to North America in the early history of the American Colonies (see note 1).

Many stories of attempts to obtain Merinos illustrate the rarity of the breed. William Foster is thought to have smuggled the first Merino sheep out of Spain to Boston in 1793. As he needed to travel overseas a short time later, he placed them in the care of Andrew Craigie. Craigie had no idea of the worth of these particular sheep. His lack of recognition of their value led to him making a meal out of all three. Various resources report the ironic twist that 16 years later, in the height of the Merino craze, Craigie had to pay $1,000 for a Spanish ram (see note 2).

Another ram was smuggled out of Spain by Robert Morris in the 1790s. By hook or by crook, Robert Livingston, Colonel David Humphreys, and the du Ponts added their names to the list of the few who were able to acquire a specimen or two of the prized breed. However, in 1802, Colonel Humphreys, minister to Spain, imported one hundred Merino sheep to his home in Connecticut. Still, Merinos largely remained a novelty breed in early America (see note 2).

A Market for Merino

Sheep were, of course, a part of the daily life and market of the Colonies from the start. The dominant breeds were mainly English: Longwools, Dorset, Romney Marsh, and old Wiltshires. That doesn’t seem too bad, at first glance. However, at that time, these sheep were known to be leggy and late maturing, and they often had low wool yields. They were not subject to the selective breeding processes that were developing in England at that time. However, they were hardy and easily adapted to the harsh conditions in the Colonies, which was of vital importance (see note 3).

There was not much effort initially to improve the breeds further for wool production. The American textile industry was yet to see major growth, wool prices were low, and raising sheep just for wool was not very profitable. Cloth produced by the few commercial mills could not compare to what was available by trade. Home production existed, and some farmers kept small flocks of multipurposed sheep.

The bulk of the textile needs were supplied by trade with England and France. From the start of the Colonies, England discouraged textile production in the Americas. Even after the War of Independence, America did not have an industrial infrastructure for manufacturing cloth in the quantities needed. In a country of agriculture and trades, coarse wool and cloth were in demand. The little fine wool needed was imported, and the industry was never encouraged to grow in that direction as an economic device, except for a brief fervor for homemade goods during the Revolutionary War.

However, things were beginning to change. Wealthy farmers such as George Washington and Thomas Jefferson saw the potential for sheep to become a profitable investment. Initially, Jefferson’s main consideration was that sheep were “good and cheap.” His initial goal for sheep wasn’t wool, but to improve his land, which was depleted due to the production of corn and tobacco (see note 4). 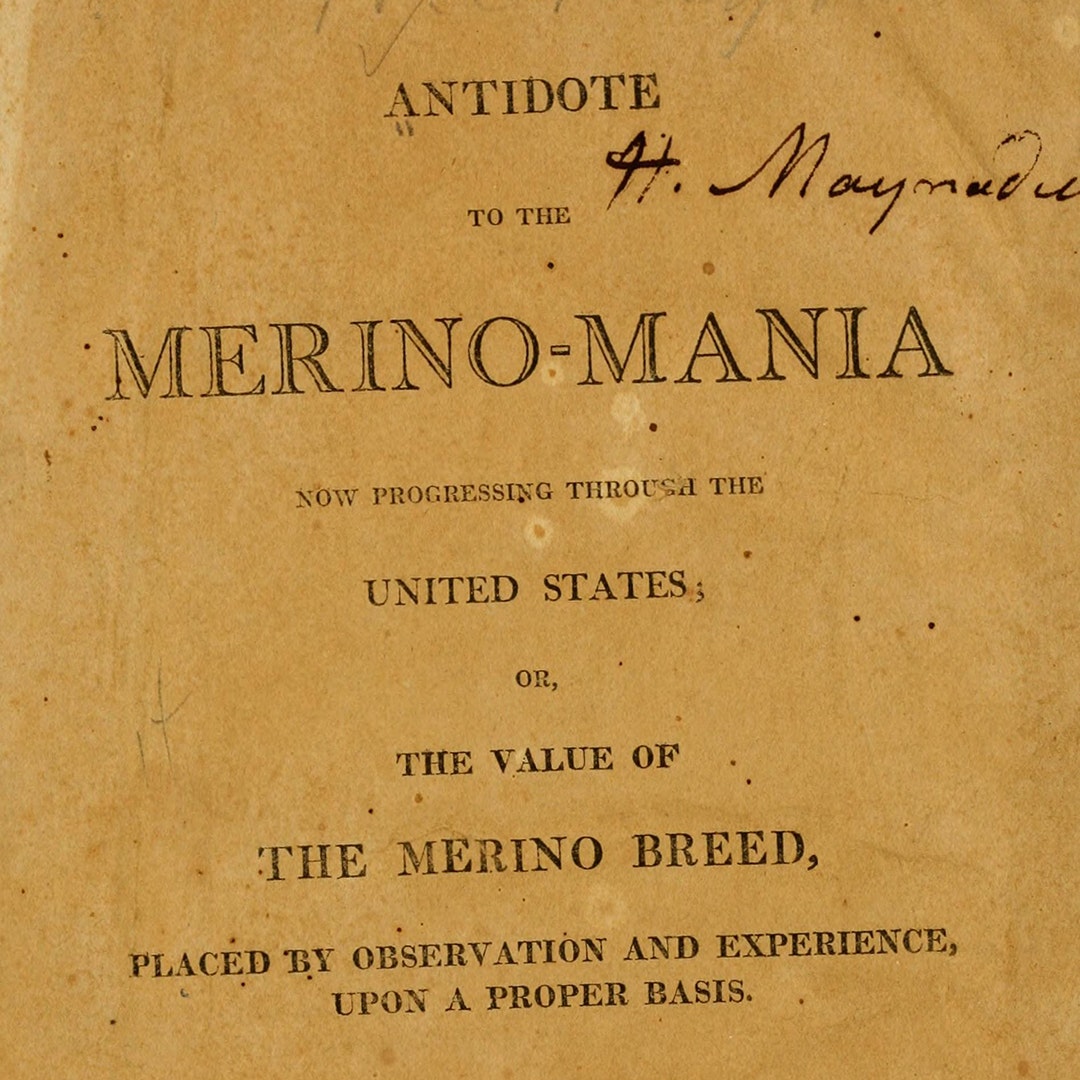 Title page of Antidote to the Merino-Mania Now Progressing Through the United States, (1810). Photo courtesy of Library of Congress

The Rise of Merino

In 1808, things changed. Like many changes that have shaped history, war and economic need drove the increased interest in wool production in the newly formed United States. The Embargo Act of December 1807 curtailed trade from England. Prior to the embargo, fine wool woven in England came almost exclusively from flocks in Spain and France. That trade avenue now needed to be replaced, which made obtaining and raising Merinos profitable and popular. Woolen mills multiplied to replace the supply of previously imported fine cloth.

Jefferson wrote to the Marquis de Lafayette, “Our embargo . . . has produced one very happy and permanent effect. It has set us on domestic manufacturing and will, I verily believe, reduce our future demands on England fully in half. We are all eager to get into the Merino race of sheep.” The Embargo Act was replaced by the Non-Intercourse Act of 1809, directed against both Great Britain and France. States offered premiums and prizes to encourage farmers to raise sheep, Merinos in particular. Jefferson encouraged domestic manufacturing, of course, which was a by-product of his legislation. But it was more than just profit for him and many others; it was an expression of patriotism (see note 4).

Merino mania had permeated American society, even to the highest office. Those who had previously been able to secure fine-wooled Merinos made huge profits. The number of the breed in the country at this point still proved inadequate to meet the demands. An increase in demand for quantity and quality meant better, finer-wooled sheep with greater yields were needed. Farmers jumped at the chance, abandoning their grain crops to raise Merino sheep. In Vermont, thousands of acres of trees were cut down to provide grazing land for the new flocks.

At the same time, with many years of restriction of the export of Merino sheep, the Peninsular War forced Spain to liquidate assets to secure funds. Selling excess Merino flocks was a way to raise funds, and Americans were more than happy to seize the opportunity to purchase the fine-wooled sheep. Through his consul to Portugal, William Jarvis, Jefferson finally received his Merinos in the summer of 1810. The Merinos landed in droves, with a reported 19,681 arriving between April 1, 1810, and August 31, 1811. Jarvis imported thousands of Merinos for his own estate in Vermont (see note 5).

England itself increased trade restrictions further during the War of 1812, resulting in another boost for America’s domestic wool industry. The demand for fine-wooled fabrics increased again. Prices of wool per pound increased; farmers now had even more incentive to raise both fine- and coarse-wooled sheep.

As with many speculation schemes, too much of a good thing eventually backfires. Mass importation ceased at the end of 1811, but by then the market was saturated with a large influx of Merinos. Prices offered per pound for wool dropped drastically. At the close of the conflict and the cessation of restrictions, once again, British goods poured into America. A decrease in tariffs (due to the need for Britain to liquidate its supply of wool) caused an influx of longwool below market cost, and wool prices tanked. Neither those involved in the new western expanse nor those of the agriculture-based South had need for fine clothes, and the market for fine wool dried up. 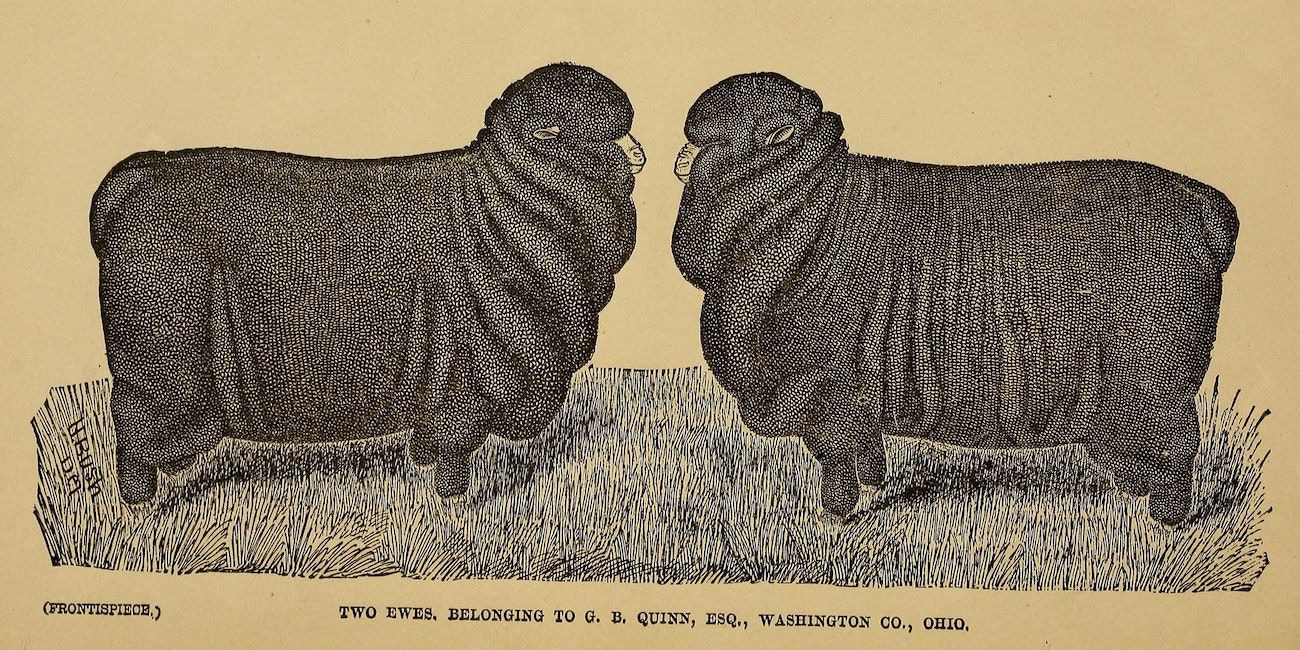 It was no longer as profitable to raise Merinos for domestic production. In fact, it was no longer profitable to raise any sheep for domestic wool production, and many made their way to the mutton market. Sheep that had once commanded a price of $1,500 just four years prior, now sold for $50. According to the New England Historical Society, the region had nearly four million sheep in 1840, but half that number by 1860 (see note 6).

Afterward, the wool market had several more spikes, including a new flush of interest in fine wool during and after the American Civil War, but none as great as the early Merino craze. The ending to this tale isn’t as sad as it seems. Merinos continued to spread across the country, with many kept in small flocks. As a breed they remained, and their impact in American sheep culture persists. Merino sheep have certainly made their mark on the history of the United States and remain a favorite among many fiber artists today.

Today, it’s difficult to imagine the long, arduous journeys that animals made as they crossed continents and oceans. Colonel David Humphreys imported a large group of Merino sheep from Spain in 1802.

“I succeeded in getting a person of the most respectable character to deliver to me at Lisbon one hundred; composed of seventy-five ewes and twenty-five rams, pure Merinos, from one to two years old. They were conducted with proper passports, across the country of Portugal by three Spanish shepherds and escorted by a small guard of Portuguese soldiers. On the 10th of April, 1802, they were embarked in the Tagus, on board the ship, Perseverance, of 250 tons burden, Caleb Coggeshall, Master, and after a voyage of fifty days, twenty-one rams and seventy ewes were landed, and taken to my farm in Derby, Conn., they having been transfered [sic], at New York, on board a sloop destined to that river. The nine which died were principally killed in consequence of bruises, received by the violent rolling of the vessel on the banks of Newfoundland.”
—Colonel David Humphreys as quoted in The Life and Times of Hon. William Jarvis.

Interested in diving into more of the history of fiber and spinning? This article and others can be found in the Summer 2020 issue of Spin Off.

Also, remember that if you are an active subscriber to Spin Off magazine, you have unlimited access to previous issues, including Summer 2020. See our help center for the step-by-step process on how to access them.

Denise Williams, a former schoolteacher, decided to live her dream and become a writer and artist. Her passion is processing and spinning fibers to knit, crochet, and weave. Denise chronicles her fiber adventures on her YouTube channel, Something Beautiful Handcrafts.