Monarchs, Milkweed, and You

Milkweed plants not only support threatened monarch butterfly populations, they produce several types of spinnable fiber! Learn how milkweed floss has been used in the past and methods for blending it to create your own pro-butterfly blends.

Milkweed floss emerging from its pod. Photo by Matt Graves.

Often overlooked or considered by some to be a noxious weed, the milkweed plant is a key link in the survival of the monarch butterfly, which is found throughout North America. In autumn, the milkweed’s horn-shaped pods break open and release 50 to 100 seeds, each attached to a parachute of silky floss that carries the seed on the wind.

Many curious spinners have watched milkweed floss emerging from ripened seedpods and wondered about the yarn it might make. While we’re not likely to find an abundance of milkweed floss at our next fiber festival, this surprisingly tenacious plant fiber can be a wonderful addition to our yarn. If we replant the seeds as we harvest the fiber, we are also helping to propagate an important part of the monarch’s ecosystem.

The father of modern taxonomy, Carl Linnaeus, learned of the many folk-medicinal uses for the plant and named the genus for milkweed after the Greek god of medicine and healing, Asclepius.

In addition to its long-recognized medicinal qualities, milkweed has been used as a fiber source. As a bast fiber, the stems were a reliable source of cordage for Native Americans. During World War II, after losing access to kapok, a seed fiber from the Philippines that was used for life jackets, the United States found the hydrophobic (water repellent) properties of milkweed were an effective substitute. To process the fiber, the Milkweed Floss Corporation of America was established in Petoskey, Michigan, in 1942. The government slogan “Two Bags Save One Life” referred to needing two mesh onion bags full of ripe pods (about 20 pounds) for each life preserver produced. The need for milkweed was great, and because it was not a farmed crop, ordinary citizens and schoolchildren answered the call for picking ripe pods by scouring country roadsides and railroad tracks for the plant. Although the Milkweed Corporation was short-lived (it closed after the war), enough seed floss was collected and processed to fill about 1.2 million life preservers.

Today, milkweed’s many beneficial properties are becoming newly appreciated. Along with its use as a natural insulator in jackets and comforters, researchers discovered that the floss readily absorbs oil while simultaneously repelling water, thus making it an effective fiber to help clean up oil spills. And for handspinners, it can be a special additive to our yarn. 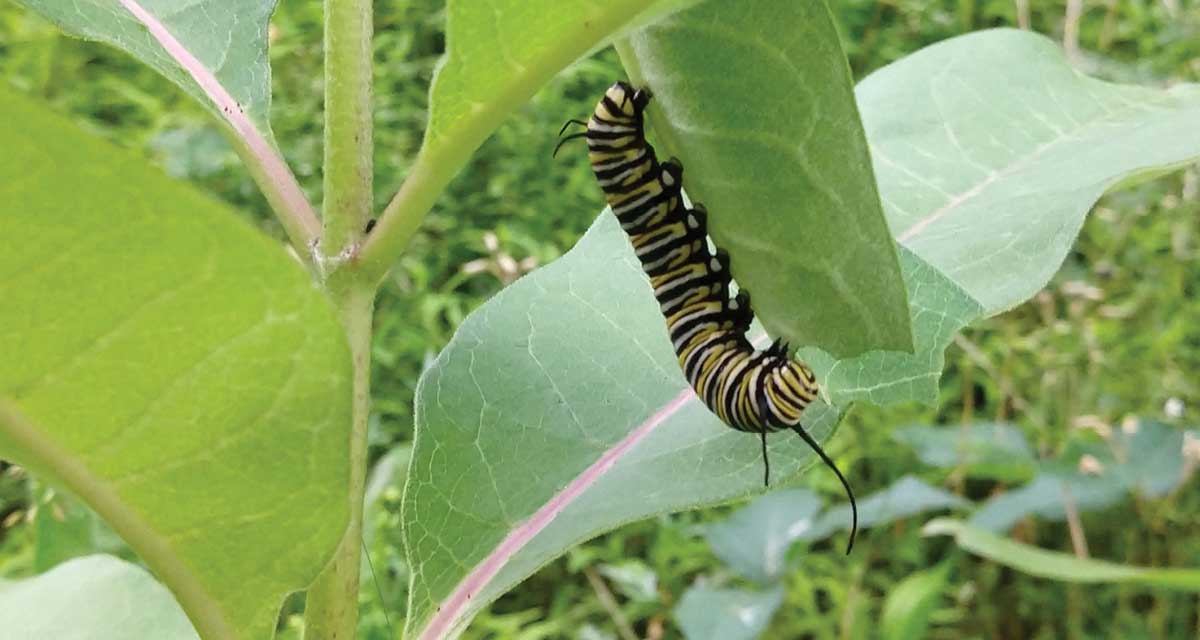 Monarch caterpillar on a milkweed leaf. Photo by Kathy Augustine

After mating, the female monarch butterfly will search for milkweed plants—this is the only plant on which she will lay her eggs. Each egg (about 1.2 millimeters high and 0.9 millimeter wide) is deposited on the underside of individual milkweed leaves.

In about four days, the egg hatches when a tiny caterpillar eats its way through the shell. After that, the caterpillar relies solely upon the milkweed plant for all of its nutrition. During the next 10 to 14 days, it will go through five instars, or growing stages. At the end of each stage, it will molt, or shed its skin. From an approximate length of 2 to 6 millimeters at its first instar, the monarch caterpillar will grow into a plump 25- to 45-millimeter eating machine by its fifth and final instar.

At this point, the caterpillar will find a safe location to transform into a smooth, green chrysalis. Metamorphosis, which lasts 10 to 14 days, is the restructuring of the tissues of the larval caterpillar into the adult butterfly that will emerge from the chrysalis.

Monarch butterflies that emerge from the chrysalis at the end of the summer will be the generation that will make the incredible migration journey. Depending on where they begin their journey, some will travel over two thousand miles to their winter grounds in the high-elevation oyamel fir forests of central Mexico. Here, in dense clusters among the branches of the oyamel fir trees, millions of monarch butterflies overwinter for several months in a semidormant state until warmer temperatures (sunny and above 55ºF ) when they will begin the mating and reproduction cycle all over again as they migrate north. 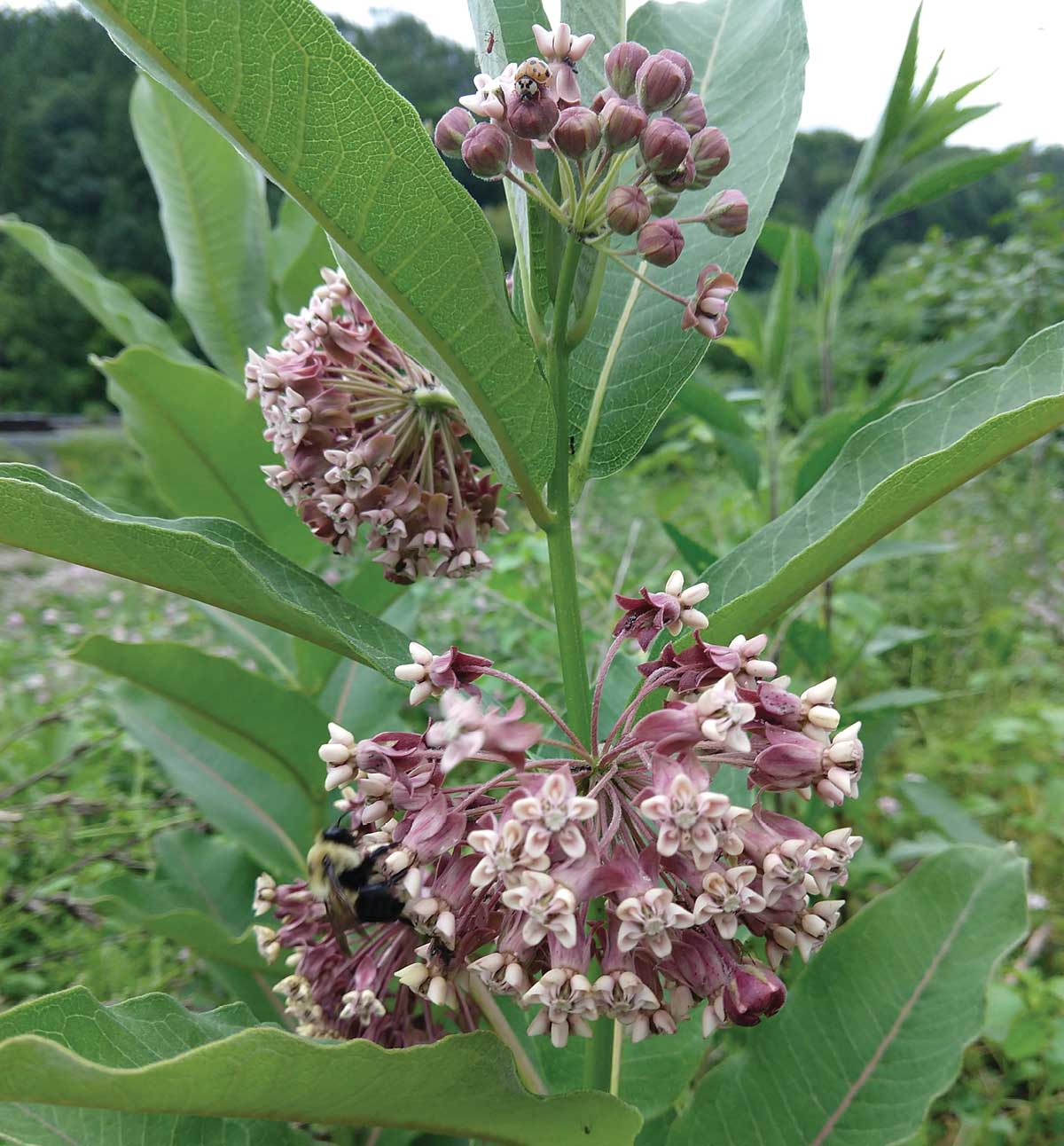 Monarch butterflies are at risk for extinction. In 2016, the monarch population of 150 million, up from an alarming 42 million in the previous year, still showed a steady decline of 68 percent over 22 years. Only large populations can help a species endure unpredictable threats, such as the single storm in 2002 that killed an estimated 500 million overwintering monarchs. Conservation programs, such as the Monarch Monitoring Project affiliated with the Cape May Bird Observatory in New Jersey, have researched the migration of monarchs for years and have increased public awareness. Many factors have contributed to the shrinking monarch population, including deforestation of their winter grounds, severe weather patterns, and a diminishing availability of milkweed plants. “Habitat loss and modern agricultural practices have resulted in a dramatic decline in milkweed, and therefore a decline in monarch numbers,” points out Mark Garland, director of the Monarch Monitoring Project, who has been studying monarch migration for nearly 30 years. 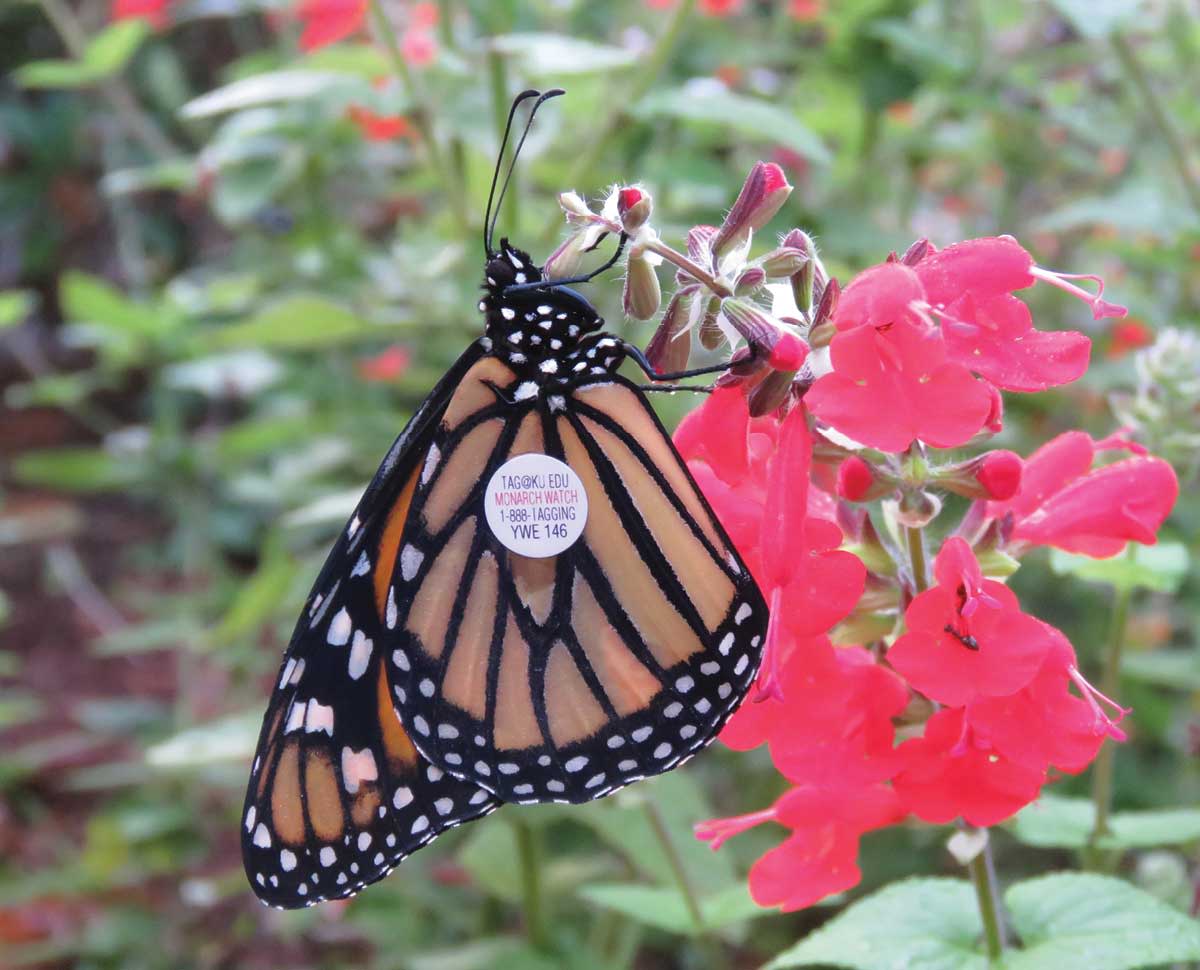 Conservation biologist and former monarch butterfly field naturalist Stephanie Augustine shares that there are a number of ways that people can help conservation efforts, including data collection. “Monarch tagging is a massive citizen science project, amassing much more data than professional resources could easily gather. Because monarchs are such a charismatic species, it is easy for anyone to snap a photo of a tagged butterfly, report it to the Monarch Watch monitoring program, and help contribute to the research dedicated to saving the monarch from extinction.” (See Resources.)

During the summer months, locate where patches of milkweed plants are growing in your area. Because it is considered a weed, the plants are often found along roadsides and unused fields. Common milkweed (Asclepias syriaca) grows to 2 to 5 feet tall. Attached directly to the erect, sturdy stems are ovate leaves, 4 to 7 inches in length, that bear a prominent midrib. The milky white sap for which the plant was named will immediately ooze from a broken stem or leaf. Fragrant flowers (colors vary with species) are arranged in ball-like clusters at the tops of stems.
After identifying the milkweed plants, carefully check the leaves for the presence of monarch caterpillars, which can be easily identified by their iconic black and yellow stripes. Don’t be surprised to find other inhabitants because many other insect species also depend solely upon milkweed for their nutritional needs. 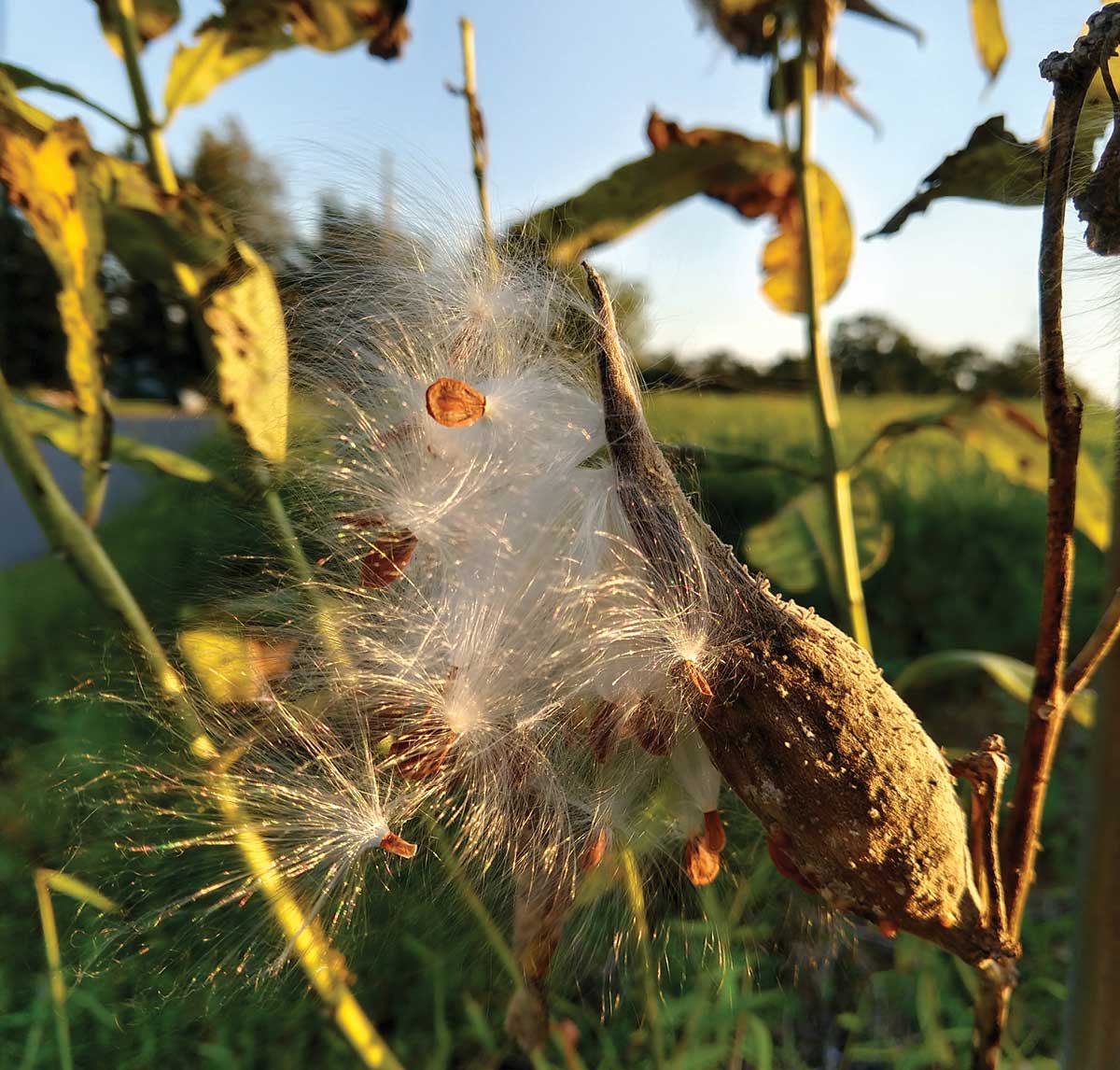 As autumn approaches, where there were once clusters of flowers, long gray-green seedpods will appear. These pods, upon maturation, will split open to reveal seeds arranged like fish scales along a fleshy core. Each seed is attached to a tuft of fine silky down that facilitates its airborne flight. Harvest mature pods by snipping them off the plant with sharp scissors. Allow the pods to dry thoroughly by spreading them on a drying rack that allows air circulation. Store dried seedpods in a paper bag to reduce chances of molding. When cleaning and collecting the fiber, be sure to save the seeds and then redistribute them in locations ideal for a milkweed habitat or monarch way station.

Milkweed seedpod fiber, or floss, tends to create a brittle yarn when spun alone. But blending the floss with another fiber such as wool or cotton will add structural strength to the shimmering milkweed fiber. The ratio of wool to milkweed blend is a personal preference, although it is important to keep a higher percentage of wool for the sake of strength and structure.

The process of blending milkweed floss with wool is similar to creating any carded wool rolag or batt, such as those combined with silk or mohair. As with any specialty fiber, if the milkweed is overcarded, it can break and tangle.

For this sample, dried milkweed floss with a staple length of 1½ inches (3.8 cm) was blended with wool from my Icelandic/Finn ewe, Isabella, that had a staple length of 3 inches (7.6 cm). Blending fibers with different staple lengths is easily done with handcards or a drumcarder. Whichever carding method you choose, the floss should be sandwiched between layers of the base fiber to tame any flyaway fiber. While blending, keep your seedpods covered and be careful of inhaling flyaway floss. 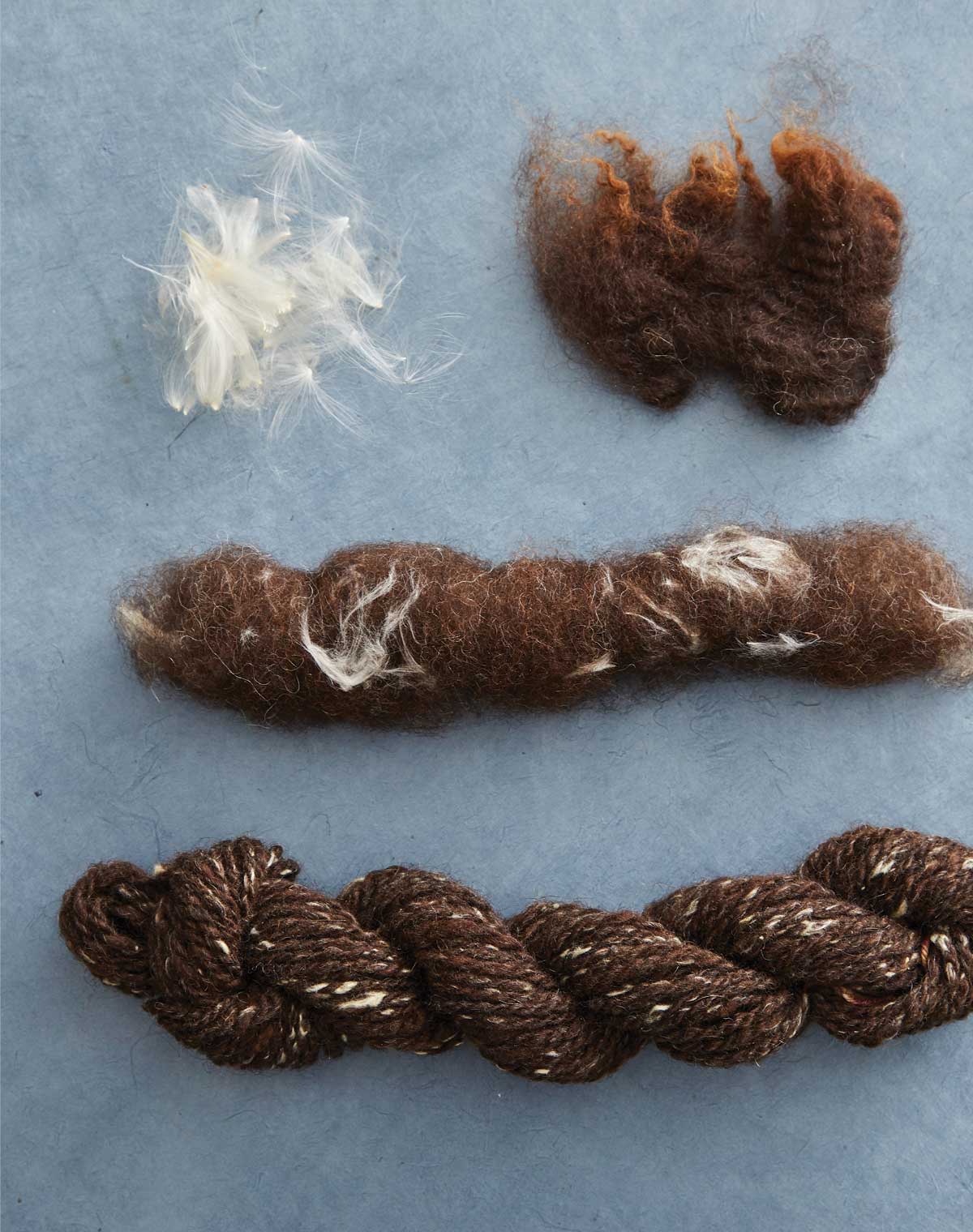 I worked in small batches, blending the milkweed and wool fibers with handcards to create rolags for woolen spinning. The two-ply yarn at 8 wraps per inch I created was about an 80 percent wool to 20 percent floss ratio. I decided on this proportion because I wanted to avoid muddying the colors in the finished yarn. The contrasting shine of the milkweed adds a fun bit of shimmer and texture when combined with Isabella’s natural coloring, creating a luxurious tweed effect.

Working with milkweed floss as an additive to wool provides the handspinner an unexpectedly sound blending fiber. Although changes in agricultural practices and the increase in suburban sprawl led to a decline in the unfettered growth of the milkweed plants that provided the monarch’s natural habitat, through conservation practices, we can begin to reverse the damage. After collecting the milkweed pods for their shimmering pockets of fiber, you can redistribute the seeds to help ensure a new generation of milkweed plants and also a new generation of monarch butterflies.

Kathy Augustine became fascinated with monarch butterflies after her daughter raised them for a homeschool project. As a fiber enthusiast, it seemed only natural to experiment with the milkweed seedpod floss. She and her husband live in Pennsylvania with their furry and fleecy family of several cats, a dog, a mohair goat, and sheep.

This article was published in the Winter 2020 issue of Spin Off.