How to Pet Your Sheep: Preparing Raw Fleece for Spinning

Today I present A Tale of Two Sheepies: the story of my first adventures with raw wool.

Image by Moha Abdo via Pixabay

Today I present A Tale of Two Sheepies: the story of my first adventures with raw wool. (There were actually three sheep involved, but two were the same breed.) “It was the best of sheep, it was the worst of ignorance.” Although I didn’t always know what I was doing, trial and error got me through in the end. 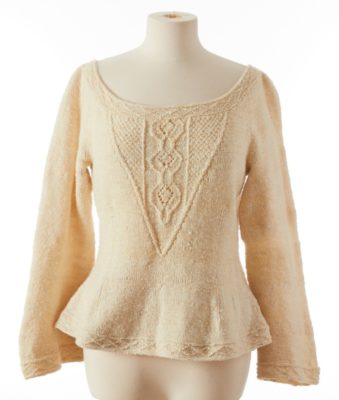 Prologue: Why Work with Raw Wool?

When I first started spinning, I had no intention of preparing my own fiber. But as my obsession grew, I had to try it. My first fleece came from a little fine-wool sheep named Stewie; I think the skirted fleece weighed no more than six pounds and the final yarn output was less than two pounds. (Fine-wool breeds have a lot of lanolin, and it’s easy to waste fleece when you first start out.) After experiencing success with Stewie, I went back to the same shepherdess; this time, she sold me fleece from her Coopworth ewes Bummer and Sweetie Pie. If I remember correctly, these girls had some Corriedale ancestry too, so their wool possessed longwool and medium-wool characteristics. (Explore sheep breeds and much, much more in Kate Larson’s invaluable The Practical Spinner’s Guide: Wool—if only this book had existed back in 1997, when I was first getting my hands dirty!)

Many handspinners never work with raw fleece, and that’s perfectly okay. But there’s something magical about processing even a few ounces of unwashed wool—you connect to the fiber and the art of handspinning in a special way. These are just a few of the benefits:

Book the First: How to Wash Fleece

You can scour (the fancy term for removing lanolin, dirt, and brown stuff that you tell yourself is mud but it isn’t) fleece in a washing machine, bathtub, or sink. It depends on what equipment you have, what type of fleece you’re cleaning, and how much you want to fuss—see the Spin Off eBook How to Wash Wool for advice from the experts.

Since Stewie was a fine-wool breed and I wanted to do this right, I read Margaret Stove’s advice about washing locks in her book Merino: Handspinning, Dyeing & Working with Merino & Superfine Wools (Interweave, 1991; now out of print). If you too want to do it right, Kate Larson describes the process in The Practical Spinner’s Guide: Wool, or you can watch Margaret demonstrate all her fine-wool techniques via DVD or digital download.

However, my desire to wash wool the “right” way went to war with my basic laziness, and laziness won. I ended up packing raw wool into lingerie bags, filling the bathtub with hot water and some Dawn dishwashing liquid, and letting the lingerie bags soak overnight. At the time, I didn’t realize that longer soaks would not result in cleaner wool; in fact, once the water cools below a certain point, lanolin re-clumps on the fiber. (Nowadays I use my washing machine, where I can close the cover and spin out the water after each bath.) Since merino felts so easily—I’m convinced all it needs is a harsh glance from an impatient spinner—I couldn’t just wring water out of the lingerie bags. I wrapped them in bath towels, let them sit in the dry tub for a while, and finally removed the fleece to dry on a sweater rack. This process took ages, but it finally worked, and I used a similar method on Bummer’s and Sweetie Pie’s fleeces.

Once Stewie’s fleece dried, I had a big box of fluffy, soft, white-with-a-yellow-streak wool. Now I had to prep it into something I could draft at the spinning wheel. Handcarding wasn’t for me—partly because my technique was all wrong, and partly because I could process so little fiber at a time. (Remember, basic laziness drives a lot of my decisions.) I didn’t own wool combs and the locks were too short for combing in any case. I didn’t have access to a drumcarder. So I bought a dog rake with widely spaced teeth and worked through the fleece one lock at a time: I held a lock by the butt end (the end cut from the sheep), ran the rake through the tips, and repeated until fluffy. Essentially, I’d adapted a flicker carder technique for use with the dog rake, which could untangle as well as fluff the locks. This system worked well enough on Stewie, and it worked fantastically well on the Coopworth ladies, with their long curly locks. 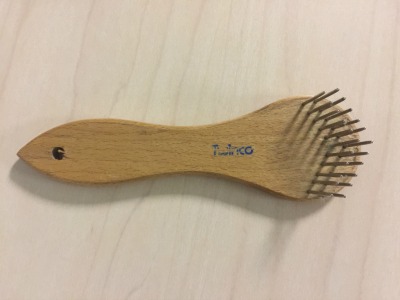 Stewie’s combed fleece became a 2-ply fingering-weight yarn of 15 wpi, spun semi-worsted in the inchworm way. While the yarn is a little lumpy (due to my combing technique and my spinning technique), it was the best spinning I’d achieved up to that point. As I’d anticipated, the yolk break, so obvious on individual locks, became invisible once those locks had become yarn. I left the yarn undyed, since its natural creamy color was perfect for my chosen sweater pattern. 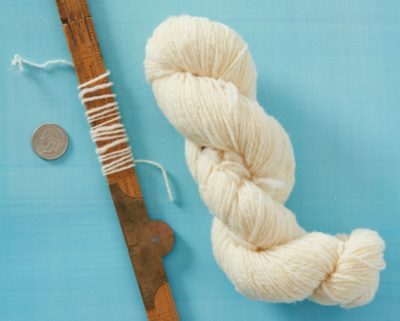 When I spun singles from Bummer and Sweetie Pie, I wasn't nearly so careful, and the resulting inconsistency came back to bite me in the butt. The finished 2-ply averages about 9 wpi (worsted weight), but it varies from sport- to Aran-weight within each skein. Spinning a longwool, however, was a great experience: long staple length, a hairier texture to the yarn, and a luster that practically glowed in the dark. If you haven’t spun a longwool, you’re in for a treat. 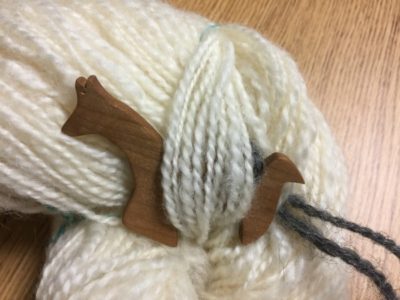 Yarn from Bummer or Sweetie Pie, not so carefully spun.

I’d planned and spun Stewie’s yarn to suit a particular pattern: Alice Starmore’s historically inspired Elizabeth I sweater. (Seriously, how could I not love this design? Her Tudor Roses book came out shortly after I’d taken up spinning, while I was working on graduate degrees in medieval and early modern British history. It was fate.) Though the design called for seaming, I adapted it for seamless construction. Stewie’s yarn worked out very well on the stockinette portions, pretty well on the lace and texture panels, and acceptably well on the cables. The finished sweater, with its dramatic V-panels, slimming waist, and bell sleeves, flattered what was once an hourglass figure and still minimizes my middle-aged tummy. I wear it frequently, since the fine-wool yarn feels so soft against my skin. When people tell me that wool is a winter-only material, or when they complain that it’s too scratchy, I invite them to pet the sweater’s sleeves. Stewie convinces them to rethink these attitudes. 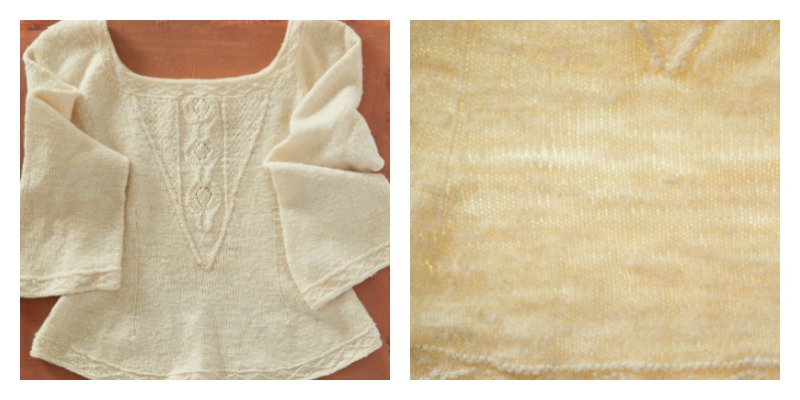 Yarn from Bummer and Sweetie Pie still hasn’t found the perfect project—or projects, since I have pounds and pounds of it in my yarn closet. I once dreamt of weaving a plaid blanket to use it all up, but that hasn’t happened. A cape in overall moss stitch with cabled floral motifs on the bottom border didn’t work out because the yarn was too inconsistent. Now I’m planning a gigantic coat, deliberately knit oversized for fulling. I love the look of boiled wool, and fulling will cover up the spinning flaws.

What did A Tale of Two Sheepies teach me in the end?