Locally grown cotton led to the development of a revolutionary pair of pants and a “Grow Your Jeans” show. Photo by Paige Green.

In this excerpt from the Spin Off Winter 2017 article “The Continuous Thread,” Susan Clotfelter explores the slow-fashion movement and revitalization of the America’s textile industry through small-scale projects such as Rebecca Burgess’s Fibershed. Burgess is on a mission to change the way we clothe ourselves and relate to the contemporary textile industry.

In 2010, Burgess decided to spend an entire year wearing only apparel that had been produced within 150 miles of her home in Northern California. “I think of [Fibershed] as a framework, an open door,” Burgess says. “You’re invited to make relationships with farmers and ranchers and dyers and spinners, and learn things about compassion and care, and become of your place.” In California, the last cotton mill was closed in the 1990s, and the wool industry (including the milling sector) had shrunk considerably.

Burgess is the author of Harvesting Color, a book on botanical dyes. She has also spent time studying textile production in Southeast Asia, so she possessed a clear vision of her ultimate, if far-off goal. “I had physical, real-time experience working in small communities where people were growing dye plants, growing their fibers, and growing their food in multigenerational families and trading those textiles to get goods they couldn’t produce themselves,” she says. She had also examined urban textile production, where workers were housed in dormitories, separated from family and tradition. “They were structurally isolated and displaced from the land base, because there’s work in the city. There are multiple reasons why people move to the city, but the one that people talk about is jobs.”

Burgess noticed the intangible price textile workers were paying for those jobs. “I saw a lot of people who were not very happy,” she recalls. “There was such a contrast. In the textile villages, people were physically healthier, there was less crime, the elderly were taken care of, the children taken care of. There were multigenerational families centered around a strategic land base. And you start to realize that in the West, we’ve become so disconnected from production cycles, from how our consumption is impacting communities.” 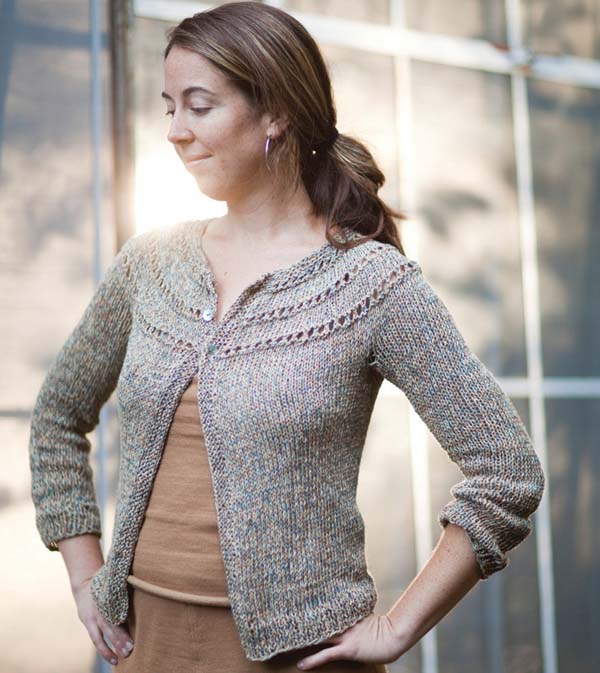 Rebecca Burgess wears a locally sourced outfit, part of her self-imposed challenge to wear only clothes produced within 150 miles of home for an entire year. Photo by Paige Green.

With $10,000 in Kickstarter money, Burgess began her Fibershed project. A fibershed, she explains, is a strategic, regional economy producing clothing and textiles. She challenged herself to wear only locally produced items for the duration of a year. As if that wasn’t enough, her clothing had to be made without producing toxic wastewater, and it had to have a sixth of the carbon footprint of a conventional wardrobe.

Her closet of fifteen pieces (her underwear was a tight, cotton, bra-like base layer) included sweaters, skirts, and a revolutionary pair of pants that led to a “Grow Your Jeans” fashion show involving organic cotton pioneer Sally Fox and Levi’s designer Daniel DiSanto. In the process, Burgess connected with MBA students, designers, textile millers and sheep ranchers—and the economic paradoxes of the American textile industry.

Featured Image: Locally grown cotton led to the development of a revolutionary pair of pants and a “Grow Your Jeans” show. Photo by Paige Green.

Susan Clotfelter has been handspinning and writing since the early 1980s. The former Home and Garden editor of the Denver Post, she is now a doctoral student at Colorado State University.

For information on Fibershed, including current programs and a list of affiliates, producers, and retailers, visit www.fibershed.com.

Explore your own fibershed with these practical spinning guides!