The Semi Zone: What are Woolen and Worsted Spinning?

Although there is broad agreement about the extremes of woolen and worsted spinning, no firm consensus exists on what precisely defines the vast middle.

What are woolen and worsted? You may think you know this one already . . . but look closer. To answer this question, we didn’t ask one spinning teacher; this represents a digest of opinions of many spinning teachers. Although there is broad agreement about the extremes of woolen and worsted spinning, no firm consensus exists on what precisely defines the vast middle.

Fiber and drafting traits together make yarn that is more woolen or worsted. Between those extremes, you can make infinite yarn combining elements from along the woolen/worsted continuum. We do it all the time. Do you spin rolags with twist between your hands but smooth down the yarn? Spin very crimpy fibers, prepared as top, with a bit of backward draw? Break off a staple length of smooth top and spin it over the fold? The blend of traits shifts the characteristics of the finished yarn.

We have avoided distinguishing “semi-woolen” from “semi-worsted.” For some spinners, the drafting technique determines what they call the yarn; for others, the fiber source; for still others, the traits of the finished yarn. (One of the delightful tidbits from Mabel Ross’s The Encyclopedia of Hand Spinning is the term “woolly worsted,” a New Zealand term for a semi-worsted yarn spun from flick-carded locks.)

The Semi Zone describes the vast majority of contemporary spinning. Hardly any yarn fulfills every criterion for woolen or worsted. Instead, we usually combine some characteristics from each category into a yarn that meets our needs (either for the finished product or for our spinning pleasure). We debated where to place three terms on this chart: double drafting, point of contact, and spinning from the fold. For double drafting, we consulted Maggie Casey’s article “Spinning Basics: Double Drafting” from Spin Off Spring 2007 as well as Mabel Ross’s The Encyclopedia of Hand Spinning. Ross also informed us on point of contact (though it’s probably time for an in-depth exploration of that term). 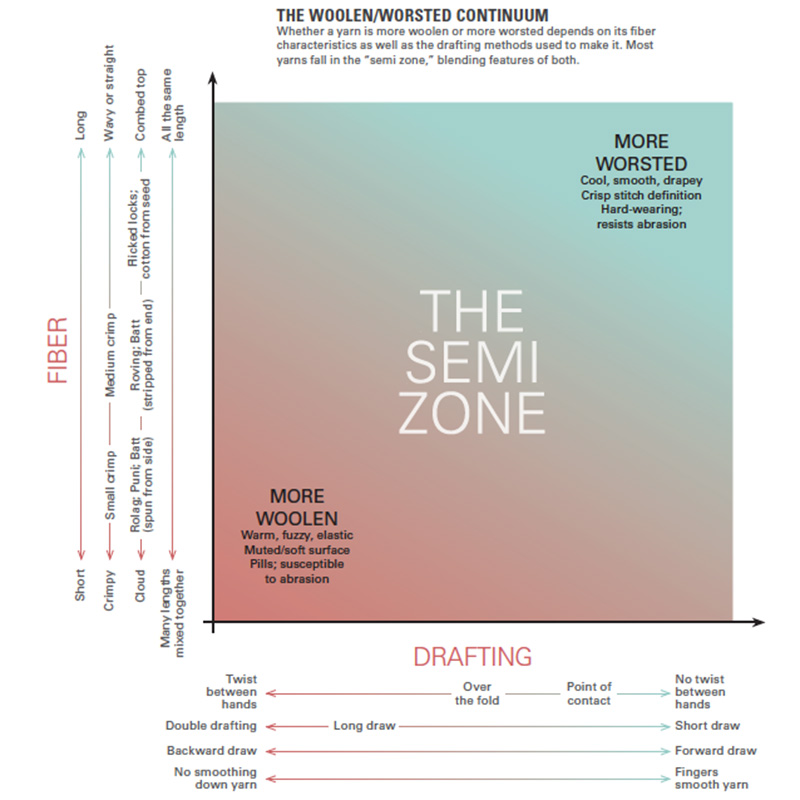 Spinning from the fold (or over the fold) falls somewhere in the middle between woolen and worsted drafting. Fibers spun over the fold are typically longer and better organized to start with, such as flicked locks or combed top, which push it toward the worsted end of the spectrum. However, spinning from the fold bends the fibers, a more woolen trait. Fibers held over the fold can be spun either with or without twist between front and back hands, drafting forward or backward. It resists easy classification, but it clearly doesn’t belong at either extreme.

This brings us to the ultimate question: Does it really matter? If you produce the yarn you want—the yarn you enjoy spinning, the yarn for your desired project, the yarn you need to make textiles for a living—do definitions of woolen and worsted matter?

Perhaps it’s more useful to consider how the characteristics relate to each other: long fibers default to combed preparations and short forward draw; crimpy fibers are most often found carded and spun long-draw. To create yarn with the traits you seek, combine options from along the Fiber and Drafting axes until you produce something you like.

Thanks to Maggie Casey, Kate Larson, Jillian Moreno, and Elizabeth Prose for their wise counsel on this wooly issue.