“The package was damaged in transit. UPS will notify the sender with the details. All merchandise is being delivered.” Receiving this message strikes fear in the hearts of every handspinner. Here are tips for shipping your treasured wheel safely.

Andrew Watson and I had been waiting for UPS to arrive all morning, after spending an anxious few days tracking my new wheel online together. The day before, the website had broken our hearts at 11:39 a.m. when the message above had been posted. There was no further news. All we could do was wait.

When the UPS truck finally pulled up, I met my regular guy at the side door just as he was wriggling his hand truck free. He gestured to the barely recognizable shape sitting at the bottom of my steps. “You need any more help with that?”

When Andrew left the wheel with his UPS Store owner three days before, it was clad in a sturdy wooden crate he had tested with the worst abuse he could imagine until then, yet what was deposited that morning at the bottom of my steps was a cardboard shroud taped around the sole surviving side of the box, the wheel largely intact, but with a cracked table and bent crank that made everything wobble miserably. What happened to the crate no one was ever able to explain, except to speculate that it might have been crushed by a backing truck. It was a unique loss in Watson Wheels shipping history with UPS, but a spectacular one, nonetheless.

What’s a spinner to do? Given my experience, and the fact that my husband, Walter, has a nearly flawless 1,550 eBay shipping record with delicate audio equipment, I’m on a personal mission to save future spinning wheels from such trauma. Understand that I don’t believe in a foolproof way to send a wheel from one place to another short of taking it there yourself, but I’ll offer a little distilled wisdom. 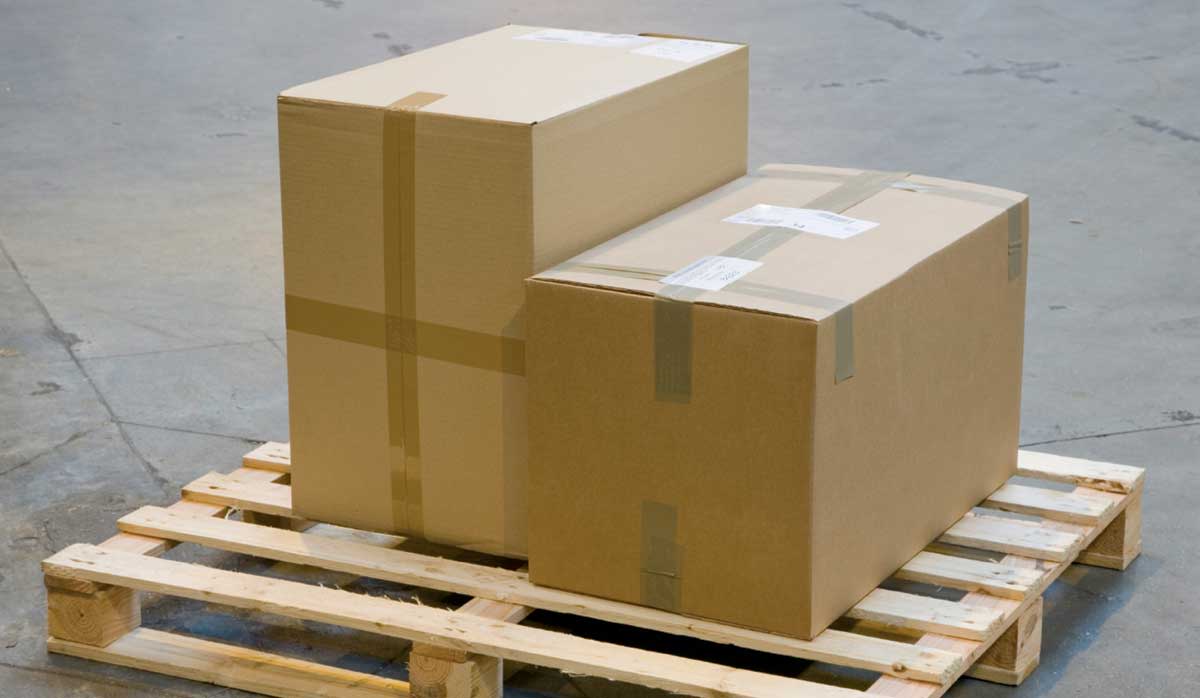 Everyone agrees that packing is a matter of eliminating movement inside the container. As a dealer for Ashford, Louet, Kromski, and Schacht, Beth Smith of The Spinning Loft in Howell, Michigan, ships wheels exactly as they are sent to her. She explains, “There’s a science of how the pieces go together in the box. They flat-pack it perfectly in the factory, and nothing moves.” Louet boxes, for example, are made of double-walled, heavy-grade cardboard and are only as big as they need to be.

Part of the process with these mass-produced wheels is to develop the packing as a component of their overall design. There is enough padding to protect pieces from rubbing, but because they fit together like a puzzle, very little material is needed. Anyone reselling such a wheel would be advised to disassemble the wheel as far as possible, re-creating the original shipping conditions, and if storage space has allowed, reuse the original packing. At the very least, use the heaviest new boxes you can locate. And good tape.

Artisanal wheel makers seldom take shipping into consideration when they design and build their wheels but do go to great lengths to create containers to protect their work in transit. After Andrew Watson’s experience with my wheel, he tested his revised crate by driving over it with his Land Rover. Sadly, there are no photos—I did ask.

Dave Paul of The Merlin Tree has never had a mishap with a wheel per se, but shared the story of a box that arrived with deep puncture holes that matched the business end of a forklift, though the handmade cradle inside miraculously survived. He shipped an Ashford Elizabeth last winter with that in mind, protecting the 30-inch drive wheel with plywood cut to match. Dave also takes special care with the crank ends, using the 4-inch cardboard tubing from his packing-paper roll cut to fit. And he cautions against the urge to use too big a box: “Nervous sellers often use boxes that are way oversized.” Too much room for movement inside can spell disaster, even with careful handling.

Carson Cooper of Cooper Spinning Wheels sends wheels in multiple boxes if necessary, not only to meet size limits, which are often a total of height, width, and length measurements of 130 inches, but also to accommodate disassembling the wheel as much as is possible, and he recommends packing the drive wheel on its own. Says Carson, “I used to send my 30-inchers in wooden crates until UPS began raising rates dramatically a few years back. Now I take a box size that fits UPS dimensional limits—the rates skyrocket if it’s any bigger. I’ll glue in a second layer of cardboard to make the box as stiff as I can, or I’ll line it with cardboard. Then I lay in a couple thicknesses of bubble wrap and a layer of Styrofoam peanuts. Each part I wrap in clean brown wrapping paper and lay in where I can, leaving a couple inches for Styrofoam around everything. Once it’s all in, I pour in peanuts to fill it up and then use a top piece of cardboard before closing the lid.”

Although Carson and Dave both agree on the issue, my husband is not a fan of peanuts: “They shift.” It’s not the peanuts themselves that are the culprit, but how people use them. Left unencumbered, peanuts will flow like water during transit. He prefers solid closed cell foam, bubble wrap, and brown paper above all other things and urges packers to never use clothing or towels as filling material. Having seen him fish T-shirts and used children’s clothing out from around crushed stereo components and punctured speaker cones, I, too, can testify to their ineffectiveness. And even though I was quite pleased when he handed me a beautiful reproduction Hermes scarf that appeared one time, he was as crushed as the vintage piece of gear it was supposed to protect. Another thing my husband will tell you: “Don’t ship in December.” 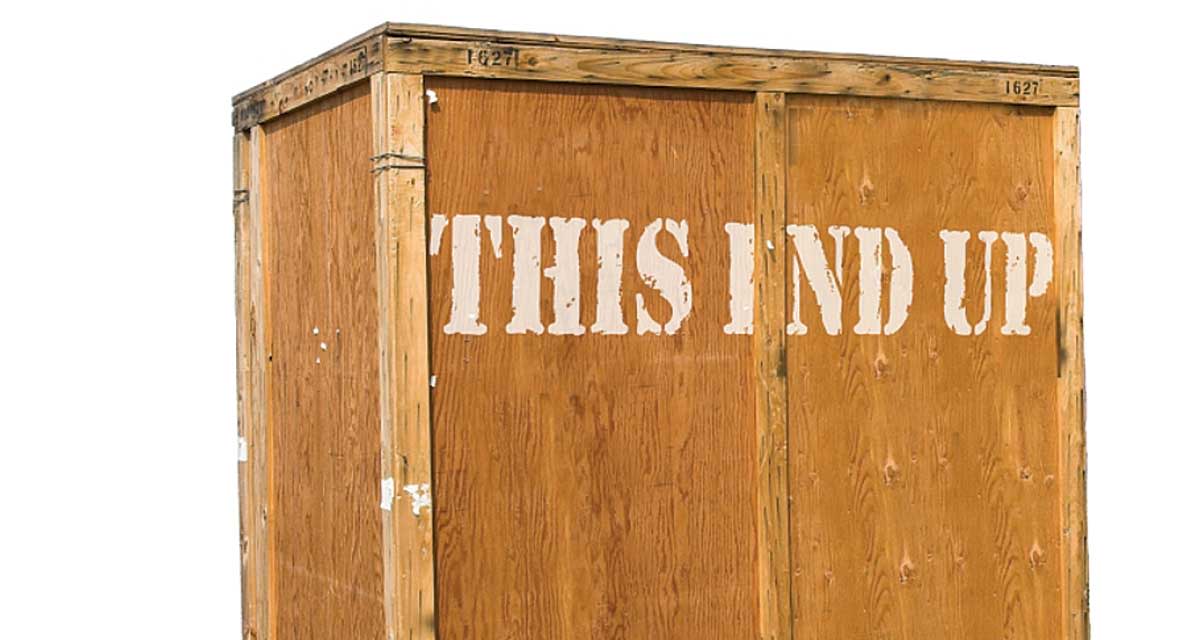 While I have never heard of a wheel disappearing, lost packages are most often a result of poor labeling. Print clearly, cover mailing labels with clear tape, and always place a return address label on the inside of the package. If your package goes astray, it’s likely in a warehouse somewhere and may be found with some charm applied to customer support and a search on the service’s warehouse database, which lists detailed descriptions of package contents. There is hope.

What happens if the package arrives damaged? Protect yourself ahead of time. Request that the person shipping the package document the packing carefully with lots of descriptive photographs. If a parcel arrives obviously damaged, you can refuse delivery, or declare to the carrier that it doesn’t look right to you and then photograph the damage and file an insurance claim. Needless to say, all the major carriers have more experience than you with claims and are reluctant to admit responsibility. Be prepared to be told that damage is a result of poor packing. Dave Paul advises, “After that, ask to have the claim ‘escalated’ and request a printed copy of their standard and stated criteria relevant to your package, showing how your package did not meet their stated requirements. Tell them that if there is not prompt and appropriate action taken, you will be forwarding a copy of your claim to your lawyer.”

Greyhound is one low-cost alternative, with minor inconveniences in exchange for some peace of mind. In a Greyhound bus from New Hampshire to Missouri, for example, my Jensen Tina II would cost $52 to ship, insurance included, which is roughly half the charge of each of the three major shipping companies. Greyhound asks you to put the package on the bus yourself at the scheduled time. The company will store the package at the destination for three weeks, for a surcharge of $2 a day. But after going to the trouble of putting your wheel on a bus, you should coordinate with the receiver to meet the bus at the other end to guarantee the highest degree of care. A major caveat is that Greyhound will value no package at more than $300, so insurance will likely not cover the loss of any special wheel, and someone may open a questionable box for a security check somewhere along the route. There is always a trade-off.

More expensive but extremely reliable options include common carriers such as Yellow Freight or the Cadillac choice of a pack-and-ship companies, such as Craters and Freighters. On my husband’s advice, I hired Craters and Freighters last fall to pick up a wheel in Portland, Oregon. The expense was worth the peace of mind, and the wheel arrived in Massachusetts six days later in pristine condition.

Household movers are also a possibility, and you may be able to piggyback your box on someone else’s cross-country move. Quite simply, increased expense buys gentler handling and shorter time in the system with less opportunity for damage to occur. Websites for all major carriers have calculators to estimate shipping cost. If you’re doing your own packing, be sure to enter the full dimension and weight of the box packed with the wheel and packing materials inside and then make your informed choice.

And my Watson wheel? We all learned a lesson. It returned to Andrew for repair in the backseat of a friend’s car, and a month later made it back to me unscathed, lovingly packed in a Land Rover–proof crate, immobilized with pink foam, with a redundant label inside, and properly insured. I swear it was smiling when I set it free.

Julia Farwell-Clay gets to spin on her dream wheel and writes about wool and other things on her website, juliafarwellclay.com.

This article was published in the Fall 2012 issue of Spin Off.