For the Winter 2019 issue of Spin Off, Emily Straw and Joanna Johnson teamed up to bring us the Copper Beeches Cowl.

The Copper Beeches Cowl is long enough to wrap twice for warmth or only once for a lengthening look.

For the Winter 2019 issue of Spin Off, Emily Straw and Joanna Johnson teamed up to bring us the Copper Beeches Cowl. Emily, who also wrote “Podcast! Creating a Fiber Community” for this issue, spun a lofty, squishy, finewool yarn. Not knowing what to make with this fruit of the Zombie Knitpocalypse (long story, so keep reading), Emily turned to one of her friends, designer Joanna Johnson. 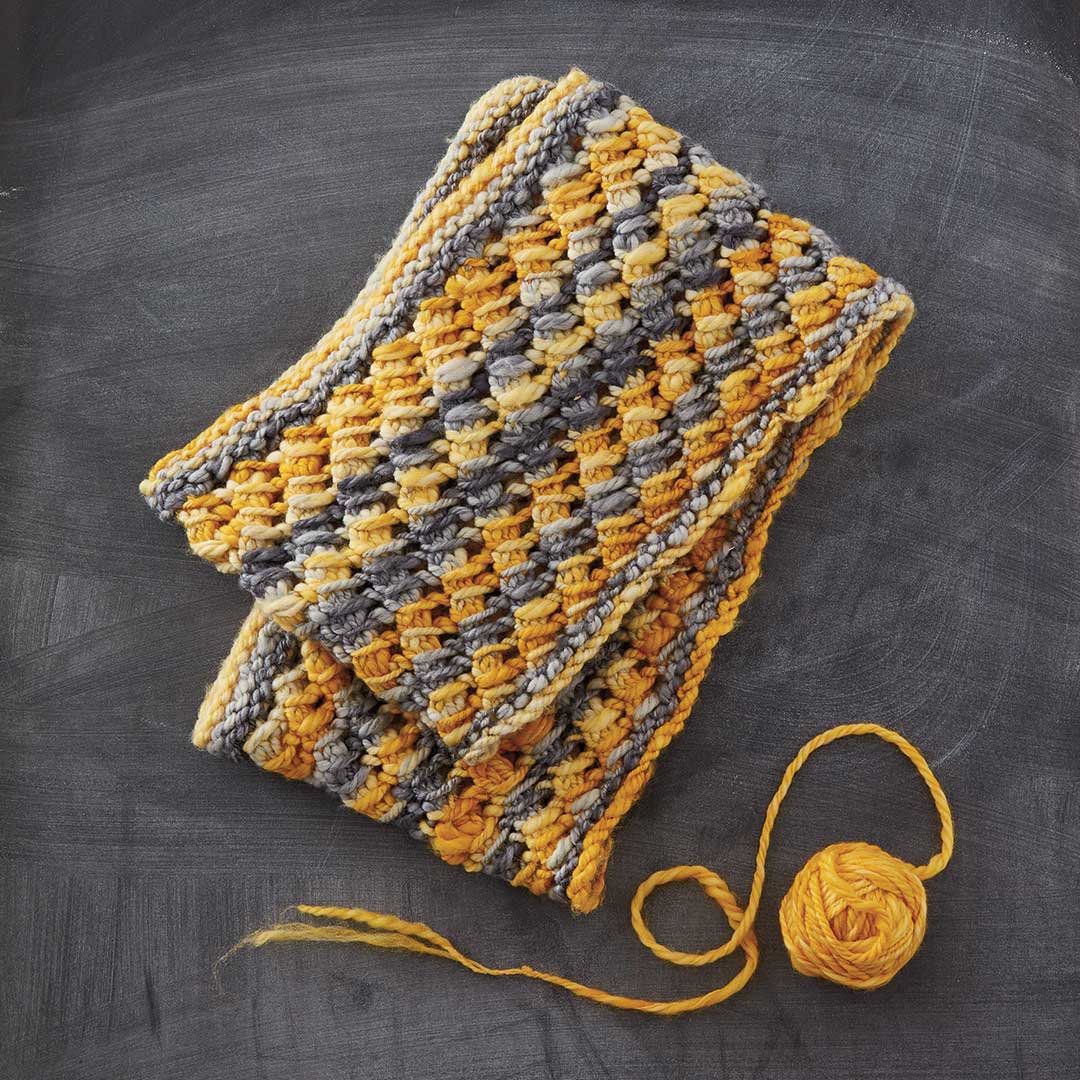 Emily’s love for this superwash Merino combed top and the kindness of fellow spinners sparked this cowl project. Photos by George Boe

In June 2016, I traveled from Colorado to Rochester, Minnesota, for my first fiber retreat: the Zombie Knitpocalypse. During a spinning class, I sat next to Sarah and Dan, who were brainstorming how they would spin some yellow and gray Merino fiber. I commented on how pretty the fiber was—gray and yellow are one of my favorite color combinations. I later found that braid and an identical one sitting on my spinning chair while my new friends sat nearby with big smiles on their faces. They had decided the fiber could be best used by someone who already loved the color combination, and I was grateful.

Spinning Notes The superwash treatment and a relatively short-staple Merino wool made the combed top incredibly easy to draft. I wanted to spin a yarn that would celebrate the fluffiness of the fiber while still creating a strong yarn. I chose a supported long-draw method. When all the singles were finished, I opted for a chain ply to keep the colors intact. The result was a bouncy, 3-ply yarn in an Aran weight that striped in variations of yellow and gray.

Knitting Notes The yarn was much thicker than I had knitted with before, and the long-draw method made the yarn vary a bit in thickness. I had 200 grams (about 250 yards) of yarn and could not figure out what to make with it. I texted a photo of the yarn to my friend Joanna Johnson, and she suggested a cowl pattern from her latest book, Sherlock Knits. The pattern was an interesting yet easy lace pattern. The original cowl used a bouncy, fluffy yarn, so we knew my handspun would be a good match. The pattern, unlike many other cowl patterns, would make use of the long color changes in my yarn to stripe along the whole length of the cowl instead of in shorter rows.

Emily Straw is a knitter, photographer, and podcaster who lives in Loveland, Colorado. She currently hosts the “Tightly Spun” podcast and teaches classes on photographing knitwear.

Joanna Johnson is the owner of Slate Falls Press, which she operates with her husband, Eric, in Loveland, Colorado. Together, they publish knitting storybooks and literary pattern collections, including Green Gables Knits. Find their books at www.slatefallspress.com.