These spindles vary in size and shape across the world, depending greatly on what type of fiber and yarn they were made to spin.

A Pu Yok-style Tibetan spindle from The Spindle Shop. Photos by Sukrita Mahon unless otherwise indicated

In this first installment of two, Sukrita takes us through the various types of support spindles. Next week see how they function with different types of fiber—Spin Off Editorial Team

Spindles are accessible. They are portable and more affordable than a wheel, and they provide an easy entry for the beginner into the world of spinning. Whether you are a spindle novice or avid collector, you will find that specific fibers are more easily spun with some types of spindles than others. Finding the combinations that work best for you can dramatically change the yarns you make and the enjoyment you find in creating them.

Supported spindles are used, as the name suggests, with the tip resting on a surface, usually a small bowl. These spindles vary in size and shape across the world, depending greatly on what type of fiber and yarn they were made to spin.

For example, the Diné (Navajo) and Pueblo peoples developed a large type of support spindle, known as a Navajo spindle, which is generally used to make thick wool singles for weaving rugs. A Navajo spindle rests on the ground and is rolled along the thigh to produce twist. One of the smallest support spindles is the takli, a very fast spindle typically made of metal that’s perfect for spinning cotton.

Supported spindles are usually used to produce a woolen-style yarn. The spindle can be manipulated with one hand as fibers are spun using a long draw, either supported, unsupported, or a bit of both. This makes them a perfect tool for spinning short-staple fibers such as cotton, yak, camel, and cashmere.

Supported spindles are not as common in the West but have enjoyed a resurgence in recent years. Talented spindle makers create limited numbers of unique supported spindles that vanish from online shops within minutes of posting. Needless to say, support spindling is a habit-forming hobby—proceed with caution!

Most of the modern support spindles that spinners are using today can be loosely classified into four categories: Tibetan, Russian, phang, and takli styles. There are, however, many different interpretations. A spindle design might fall between two styles, or may conform to a category to a limited extent. Some makers create their own styles, which are spin-offs of an existing style. 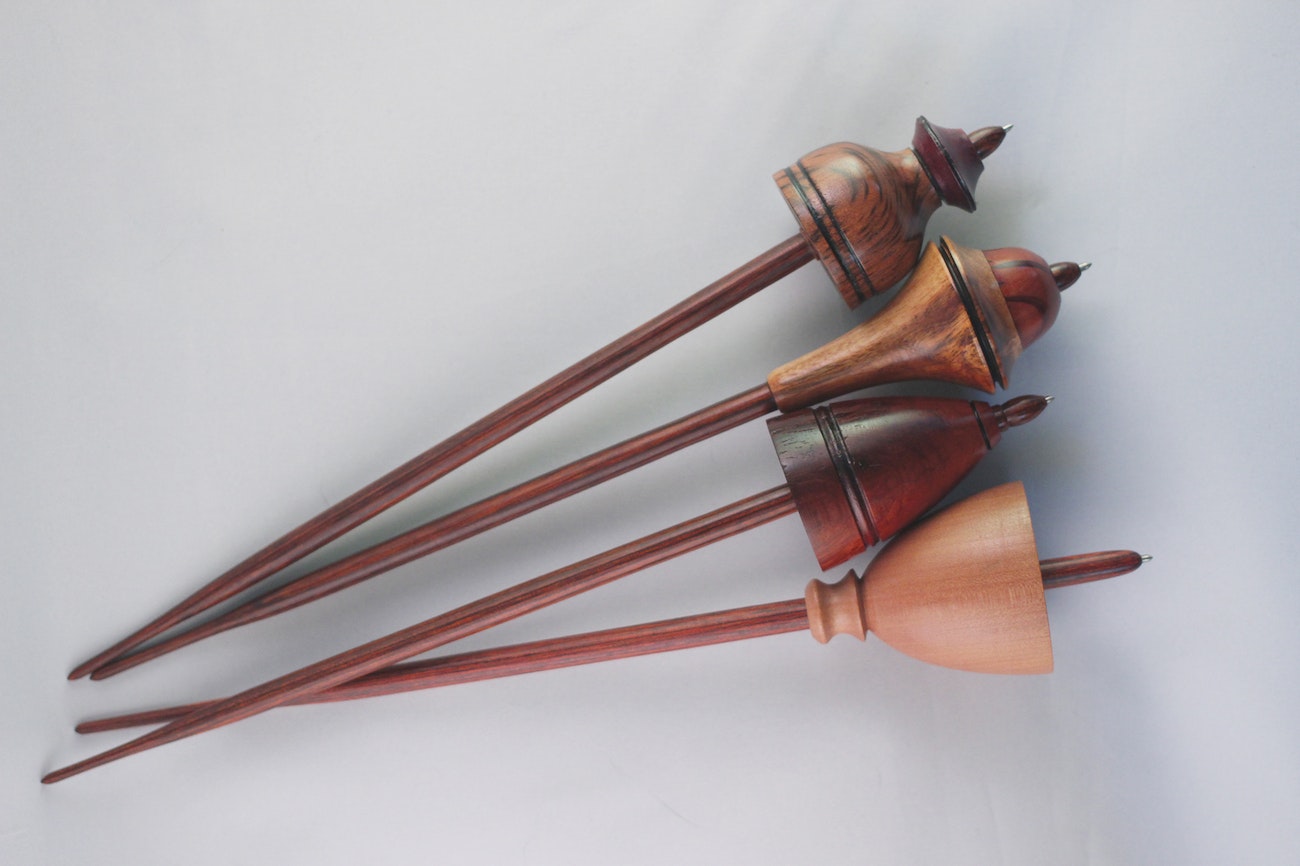 A few of Sukrita’s Tibetan spindles. From top: purse Tibetan, Dyavol, mini-Tibetan, and Dervish styles from the Spindle Shop

This is a loose term for spindle styles that originated from the Tibetan region. They are traditionally used to spin yak, goat, and sheep fibers. In Tibet, there are several different styles of supported spindles intended for use with different fibers.

As a group, Tibetan spindles are recognized for their sustained and balanced spin, which is advantageous to the beginning support spindler. However, they become heavier and harder to spin as the cop of spun yarn grows. 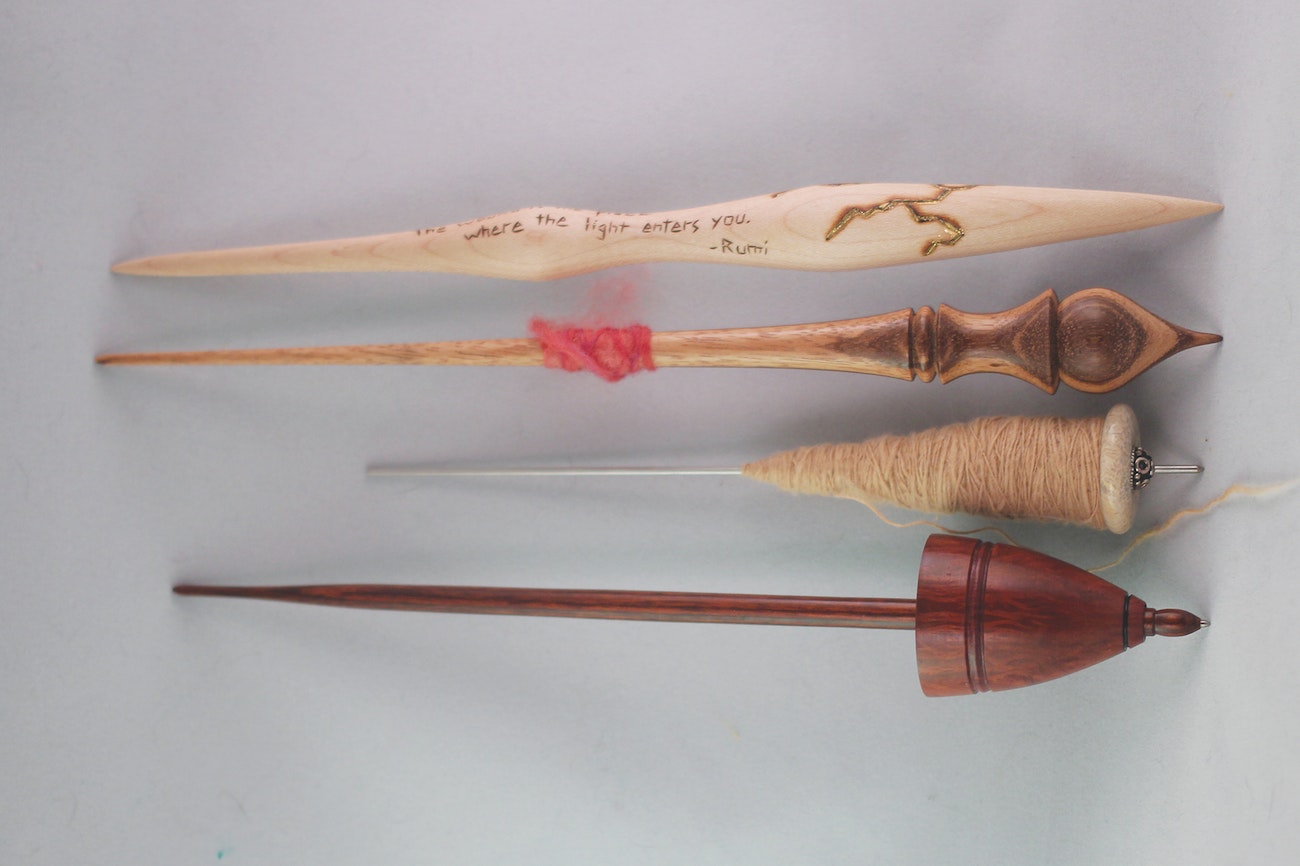 These small spindles come from India. The word takli means spindle in Hindi, so “takli spindle” is a tautology, much like “chai tea.” (The word chai means tea.) They are small, lightweight, often made of metal, and specially designed to spin cotton. They spin very fast, efficiently inserting twist into short cotton fibers. Indian taklis are made entirely of metal and have a specific design, but many modern or Western interpretations come in a variety of materials and styles. 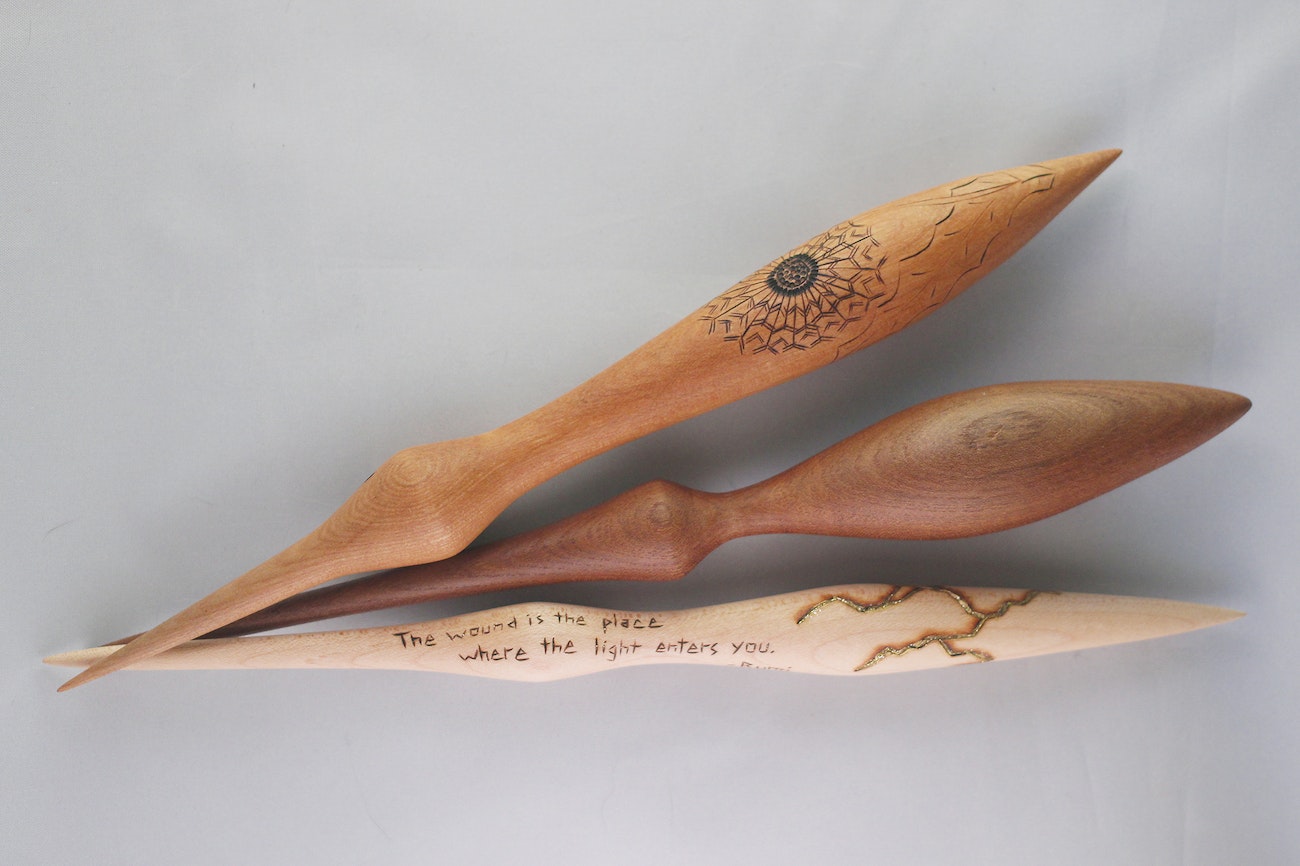 Bristlecone Goddess phangs. Goddess spindles are so called because they are carved in the shape of a female figure.

Russian spindles are lightweight and have a very short spin time. Traditional Russian spindles tend to be even lighter weight than many of the modern adaptations. These heavier spindles are often made from solid woods and might have a larger whorl than traditional styles. Russian spindles spin very fast, despite needing more flicking to maintain speed. I find that they spin better as they fill with yarn. 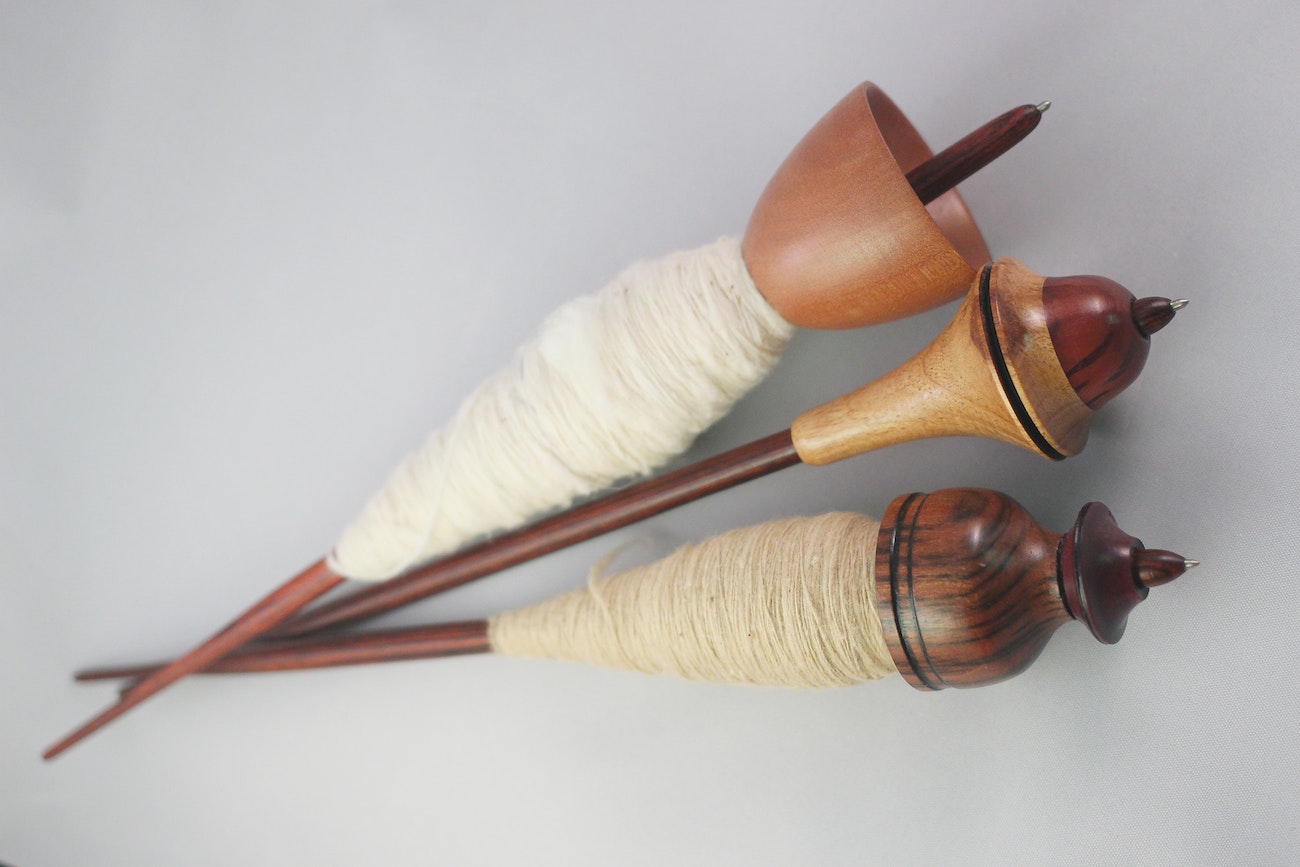 Pronounced “pong,” the phang is simple in shape; it can be described as a stick with a bulge. They vary a lot in how they spin: some need constant flicking, whereas others have a more sustained spin. In general, fatter phangs have a more sustained spin than thinner, lighter phangs. The popular Bristlecone Goddess spindles are phang-style spindles.

The handspindle is an ancient technology dating back to at least Neolithic times. Spindle whorls continue to be unearthed in archaeological digs around the world, and our understanding of when and how textile tools were used by the people that came before us evolves over time. Both drop and supported spindles of all kinds continue to enjoy a special place in the hearts of many modern spinners.

Supported spindles are still commonly used in Central Asia, Russia, and parts of Europe such as Bulgaria. Various styles of supported spindles have long been an important textile tool in parts of the world known for cotton production, including Tibet, India, Africa, and Central and South America. 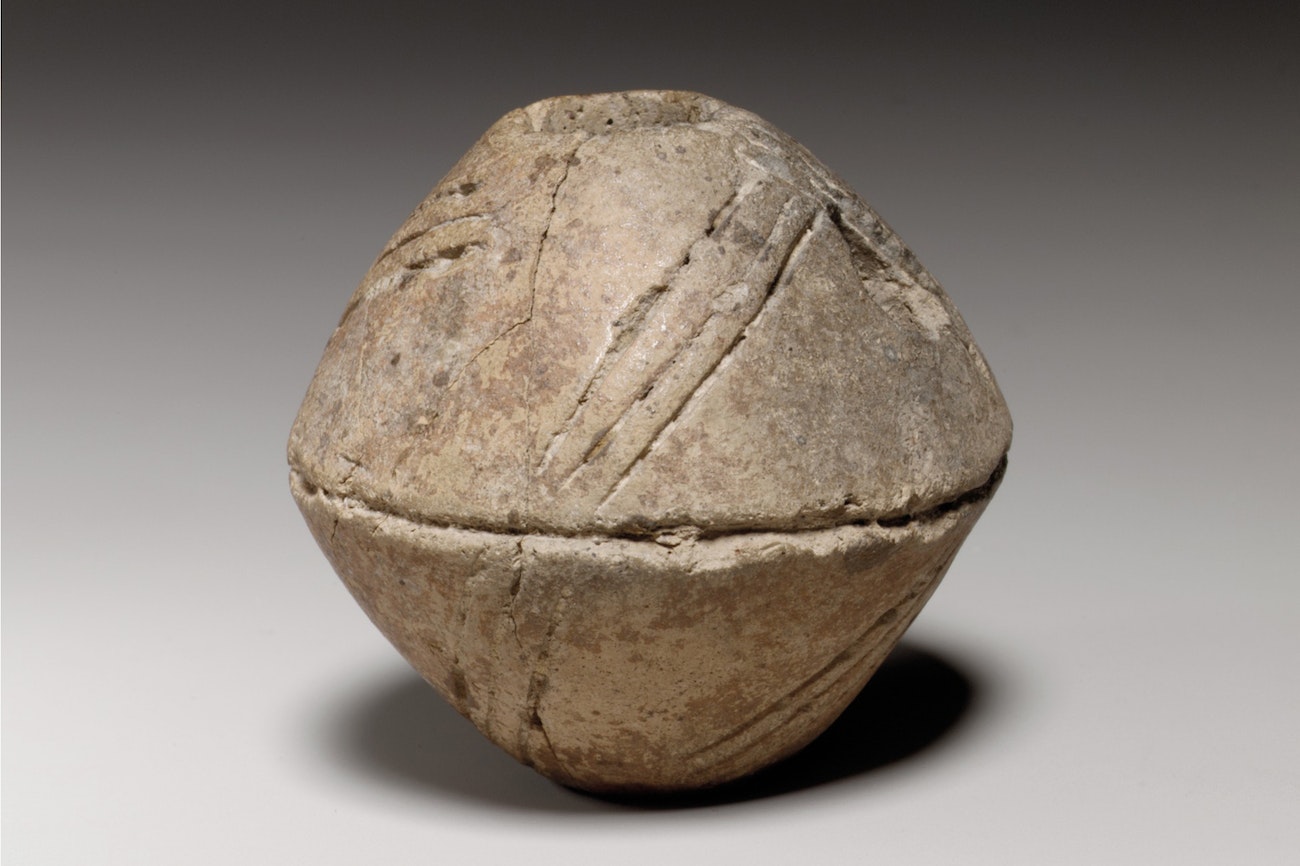 Interested in learning more about spindles? Read the full article in the Fall 2019 issue of Spin Off.

Also, remember that if you are an active subscriber to Spin Off magazine, you have unlimited access to previous issues, including Fall 2019. See our help center for the step-by-step process on how to access them.

Sukrita Mahon fell in love with spinning three years ago and has been an active member of the spinning and knitting community in Sydney, Australia, and the Central Coast ever since. Her current obsessions are with natural-colored fleece and, of course, spindles. She enjoys sourdough baking and, when the weather is right, she likes to go on mushroom exploration walks. You can find her on instagram at @su.krita and on Ravelry as sukrita.