The Weighty Matter of Turkish Spindles

An experienced spinner can make almost any spindle do the job, but for a new spinner, picking the wrong spindle can lead to discouragement. From top-whorl to Turkish, size matters.

Spindle spinning is a very simple concept. Initially there are few things involved: spinner, fiber, twist, and the spindle. With more experience, it can become more complex: What kind of fiber? How much twist? What is the twist angle and how many plies?

But the first question is always, “Which spindle do I want?” Often this question comes from a new spinner at a fiber show standing before a display of spindles, a look of longing on her face and a spindle (or two or three) in her hand. Usually she is holding a fragile, lovely, lightweight beauty. And it’s true—picking a spindle is often based as much on beauty and admiration of the craftsmanship as it is on the suitability of the spindle to spin the yarn desired.

Although it may not be the first factor that comes to mind, the weight of a spindle does matter. The reason yarn keeps breaking may be that the spindle is too heavy for the amount of twist going into the fiber. On the other hand, the delicate beauty that keeps backspinning may be too light for the amount of fiber being drafted.

A more experienced spinner can make almost any spindle do the job, but for a new spinner, picking the wrong spindle can lead to discouragement. The question of what yarn a given weight of spindle can easily create is a key consideration for all spinners but especially critical for new spinners. There are many spindle options available to spinners today, and most styles are produced in a wide range of weights. Two spindles of the same size and style can vary quite a bit in weight because some woods are much denser and heavier than others with more open grain.

The Journey to Turkish Spindles

Spindle spinning is not my native language—wheel spinning came more naturally—but after seeing a number of spinners using Jenkins Turkish spindles and actually enjoying it, I reluctantly decided to give it a try. That was the beginning of a new love. I have since learned to love all spindles, but the Turkish style will always be my favorite.

The Turkish spindle is a very old style of spindle. The first examples, found in the Middle East, include a shaft and one arm across the bottom. The version we see today has two crossed arms with a shaft going up through the center. It is bottom weighted, and the low center of gravity keeps it stable when spinning. The weight extends out from four points, making for a very stable and even spin right from the beginning. It consists of three pieces, making it easily packable. It can accommodate a large cop, and—the most-loved feature of the Turkish spindle—the three pieces can come apart, leaving an instant center-pull ball and making the spindle easily packable.

Turkish spindles come in a variety of woods, but besides the differences in wood, Turkish spindles behave differently for structural reasons. Even on spindles of the same weight, there is variation of where the crossed arms fall on the tapered shaft. If the arms are mounted higher on the shaft, they allow more room to wind on a bigger cop of spun yarn, but the spin time will be slightly decreased because the weight of the yarn is balanced higher. On the other hand, as the cop builds, any spindle will spin longer and longer.

If the weight of an empty spindle is at the upper limit of your chosen fiber and yarn, as the spindle fills with yarn, it may quickly become too heavy. A 25-gram empty spindle can easily end up weighing 60 grams. Your hands will make adjustments to keep the yarn consistent, but eventually the weight may become too much for the yarn you want to spin, and it will be time to remove the cop and start over. 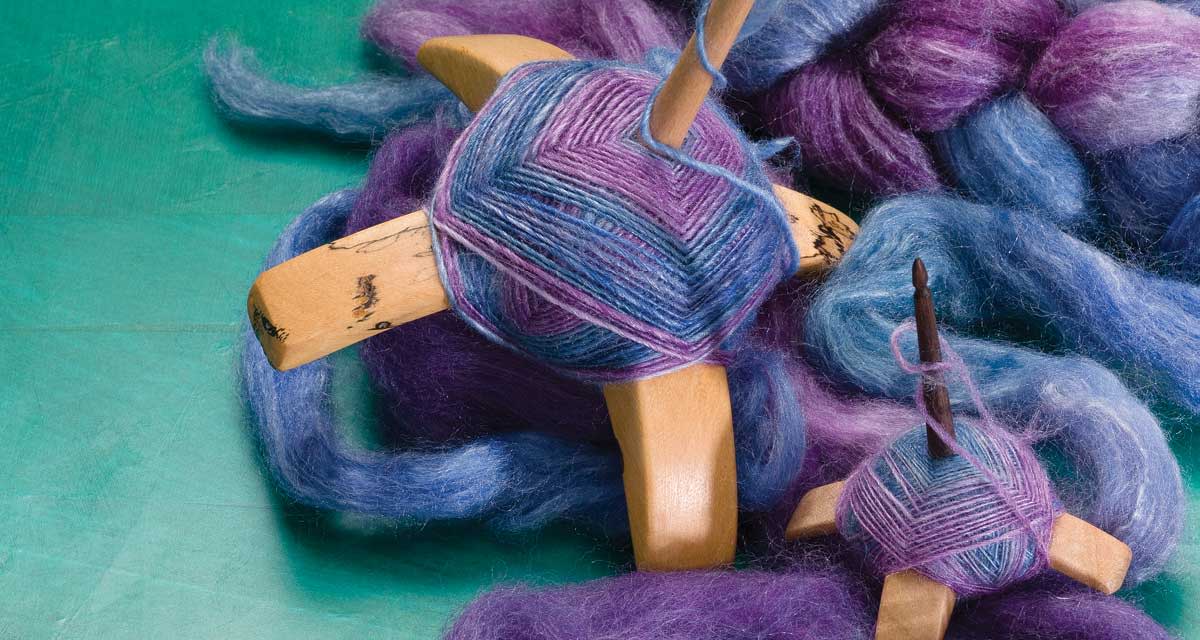 The samples below were spun on four Turkish spindles weighing 6, 25, 45, and 65 grams. Each sample shows three weights of yarn spun on a single spindle: from left, the thinnest weight, the easiest to spin, and the thickest yarn I could coax out of each spindle. The range of yarn that could be spun was surprising. It was easier to spin a thin Merino/bamboo blend yarn on the heavy spindle than it was to spin it bulky on the tiny one. Although the patience required to wait for enough twist to build up in the thin yarn on the heavy spindle was more than I possess, it just took more time. By contrast, the lightweight spindle simply didn’t have the weight to pull down on the fiber being drafted for the worsted to bulky yarn; it spun back very quickly. The center sample was where the speed of twist combined perfectly with the weight of the spindle to produce effortless spinning.

Spindle weight does matter; there is no doubt about it. The newer the spinner you are, the more it matters. But after spinning on these different weight spindles, I see that it matters less than I thought. Pick any three beauties, one very light, one medium-weight and one heavy, and you will be able to spin all the yarns you can dream up. And while you’re at it, give a Turkish spindle a try. 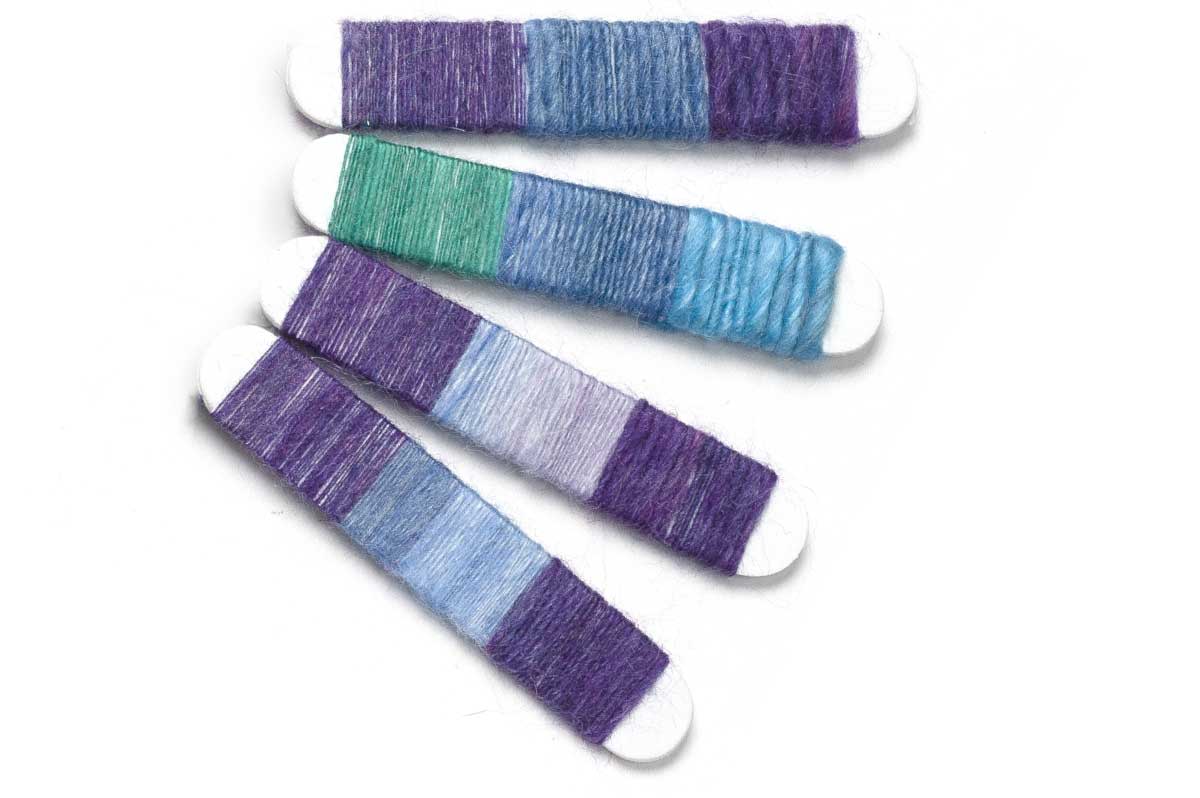 Each sample shows the thinnest, easiest, and thickest yarn to spin on each spindle from 65 g (top) to 6 g (bottom).

Winding onto a Turkish Spindle

There are a couple of ways to wind spun yarn onto the spindle: quick and dirty or slow and fancy. 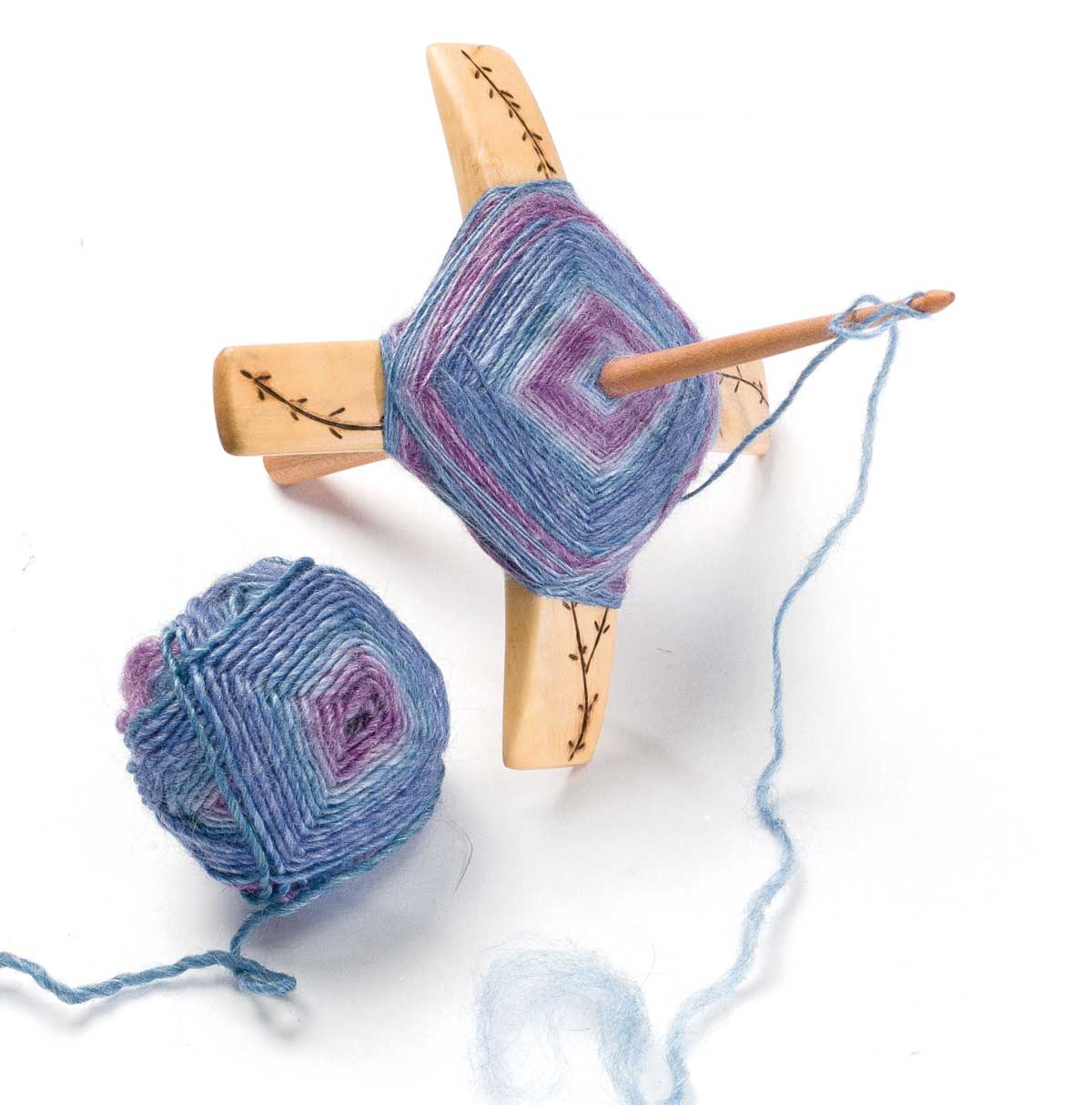 Carefully winding over two arms and under one while placing each layer of yarn creates an exquisite effect.

Quick and dirty:
Flip the half hitch off the top, make a butterfly on your fingers with the spun yarn (see page 41 for more on prewinding yarn), and wind on over two arms, under one arm, over two arms, and under one arm until there is no more yarn; don’t worry about lining up the yarn. Place a half hitch back on top and off you go. 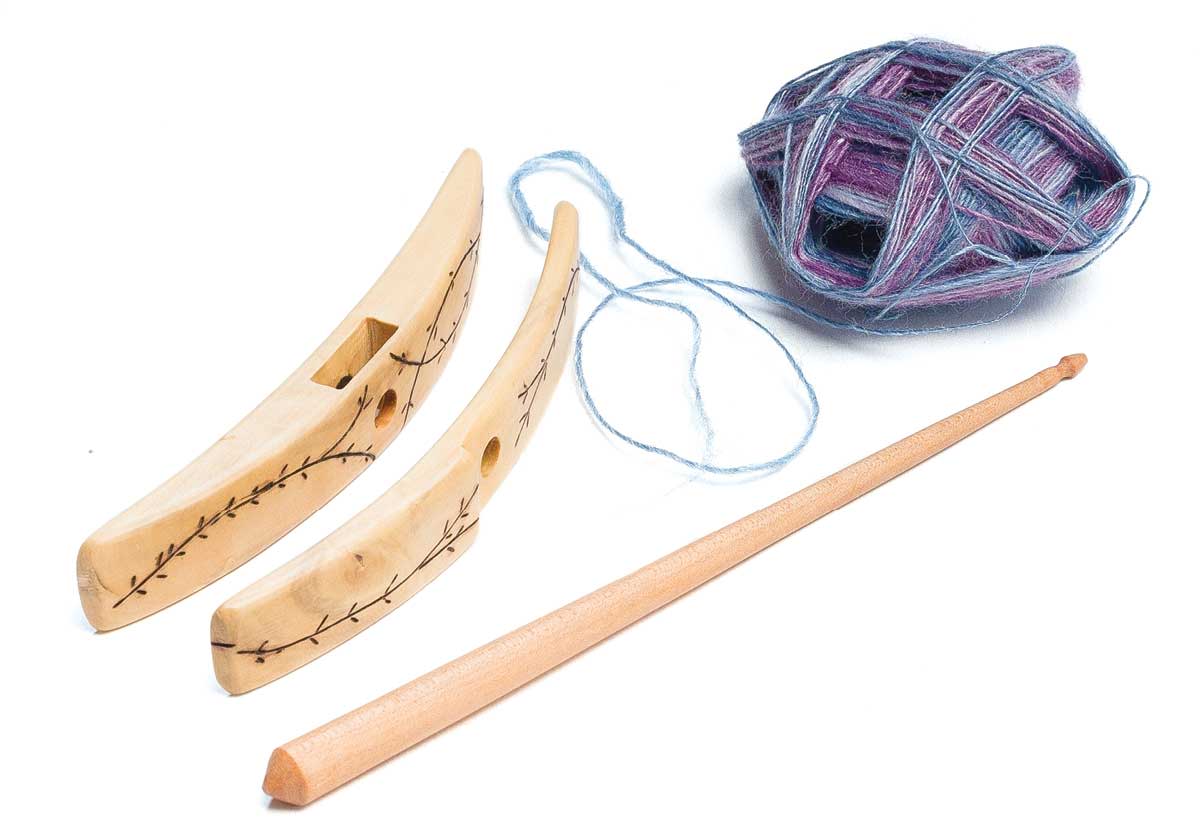 Removing the arms of the spindle leaves a ready-made center-pull ball.

Slow and fancy:
When you have enough yarn spun up to wind on, flip the half hitch off the top of the shaft. Make a butterfly and begin to wind on close to the shaft, over two arms and under one, over two arms and under one. Carefully line up each new row of spun yarn next to the last. When the yarn will not easily go down the arms any farther, it is time to begin the next layer. Bring the yarn right up to the shaft again for the second layer and repeat the over two, under one sequence, making careful rows. This layer will extend farther down the arms before it is time to make the next layer; always go back up to the shaft to start each layer. The fancy cop is built up layer after layer, and with such a lovely result, it might be worth the extra time it takes.

Constance Hall began her fiber explorations with crochet, followed by knitting, sewing, spinning, weaving, and felting—all the while being a full-time glassblower. Pattern design and teaching fiber arts fill her time.

This article was published in Spin Off Fall 2014.