Traditional Spinning on a Navajo Spindle

In “A Navajo Weaving Family” fromSpin Off Winter 2017 Jennifer Bauman introduces us to the Lane family and their home on the Black Mesa, Arizona. The Dineh (Navajo) family raises sheep on their land and spins the wool in the traditional way. Read on for an update to the Lanes’ story.

I meet the Lanes in Tuba City, Arizona, so they can lead me to their land up on the Black Mesa. We leave the paved road at the scenic Old Red Lake Trading Post and travel about 20 miles on a rugged dirt road. The scenery is so spectacular I have a difficult time keeping my eyes on the road. We pass through the high desert vegetation, on through some grasslands, and come up to the mesa. A wide variety of junipers and cedars grow there, as well as blooming herbs and wildflowers. Off in the distance you can see a deep canyon, and beyond that, Big Mountain.

Zena rides with me in my truck and explains as we bump along that they are one of the Dineh (Navajo) families whose land is located in the Hopi Partition Land, meaning that the Hopi Tribal Council and the federal government now oversee their grazing rights. These families have been advised to relocate since the 1970s, but at this point their status remains unclear. The number of livestock they can keep each year is strictly regulated, as well as any additions they make to their buildings.

This area of northern Arizona is extremely rich in coal, petroleum, and uranium. Peabody Energy has run a coalmine on the mountain since the 1960s, providing jobs for many native people. The coal company has so heavily used the existing aquifer that springs and streams have dried up, and families such as the Lanes have to haul all of their water in reservoirs carried in the backs of pickup trucks several times a month from Tuba City, about 30 miles away. The water for the livestock comes via pipeline pumped by windmills about 20 miles away. They also collect precious rainwater in barrels as it runs off the roof.

Rena agrees to demonstrate spinning for me, speaking sparingly in Navajo as she does not speak English. She requested that I not photograph her face but allowed me to photograph her hands. She pulls the wool and pinches off the twist with the thumb and index finger of her left hand. This is the first spin, and the goal is an even, loose twist, creating yarn about the thickness of the middle finger. As she adds another rolag, she spits on her fingers to splice the ends of the wool together. This felts them into a solid join. The motion of the left hand is a very rapid pull back, pinch, release, and she moves her hands so quickly it is obvious she has been doing this since childhood. Her experienced hands know when she has achieved just the right amount of twist, a form of the double-drafting technique. The spun singles is then wound onto the spindle, working to build a smooth cone-shaped cop. If it were not layered evenly, the spindle would become unbalanced when she attempted to spin more yarn. 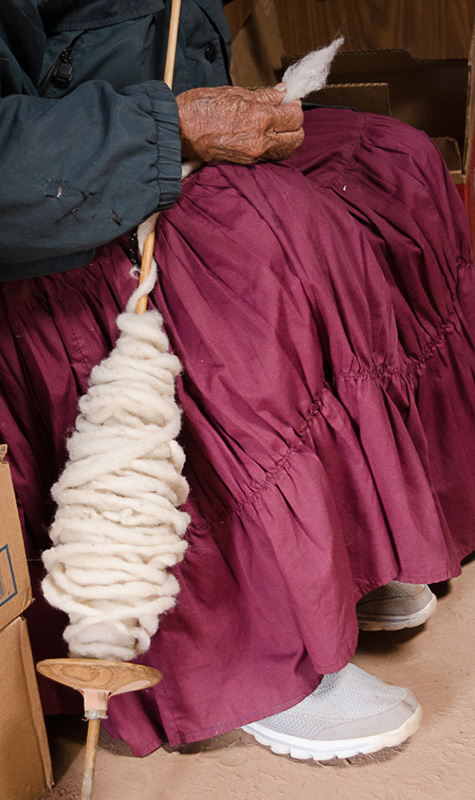 The Navajo spindle rests on the floor and against Rena’s leg as she spins.

The amount of twist inserted in the yarn depends on the purpose for which the yarn is being spun. A weft yarn is spun rather softly, while a warp yarn is spun tightly for strength. Rena joins many rolags together with her first spinning pass, loosely creating roving. She then spins the entire roving another two or three times, each time finer than the last to create a finished thin yarn. Weft yarns may be spun two or three times, while warp yarns would be spun three or four times, depending on the individual spinner’s technique. When completed, the yarn is wound off into a skein in the Navajo way. Zena demonstrated this to me by winding from a spinning wheel. The right leg is crossed over the left, and the yarn is wound between the left hand and right foot over and over until a skein is made. The end is used to tie the skein off. 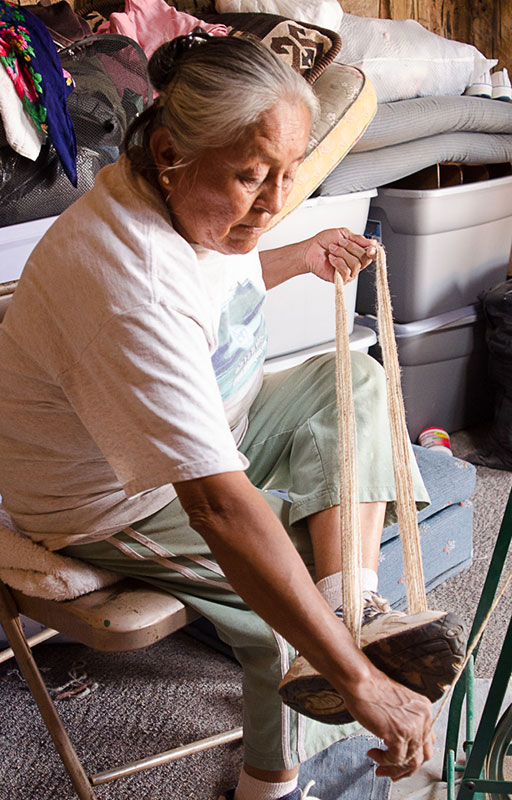 Story update: In their remote location, the Lane family relies on a solar power system that failed shortly after publication. Friends of the family have joined with the UCLA affiliate of Engineers Without Borders to replace the system, and a fundraising effort is underway. Learn more about the project at www.blackmesautility.com.

JENNIFER BAUMAN has been spinning and knitting for quite a few years, but she still gets excited at the prospect of a visit to a sheep farm. She enjoys learning new skills and techniques and has promised a sweater to each member of her extended family. She and her husband have recently settled in Dallas, Texas. Find her online at www.fromthespinningwheel.com. RESOURCES: Bennett, Noël, and Tiana Bighorse. Navajo Weaving Way. Loveland, Colorado: Interweave, 1997.