How many treadles does one spinning wheel need? Alden Amos said one; others say two. Spinners vote with their feet.

It's common to see spinning wheels with one or two treadles these days. (Some have fewer, none more.) Photo by Donald Scott

Celebrating the 50th anniversary of Schacht Spindle Company last week, I came across one of my favorite photos of Barry Schacht, from Spin Off Spring 1998. At first, you might think that it's just a combination of two of Barry's passions, spinning wheels and bicycles. If you dig a little deeper, though, you'll see that this silly-looking photo was at the heart of a fierce—sometimes furious—debate about the nature of a proper spinning wheel. 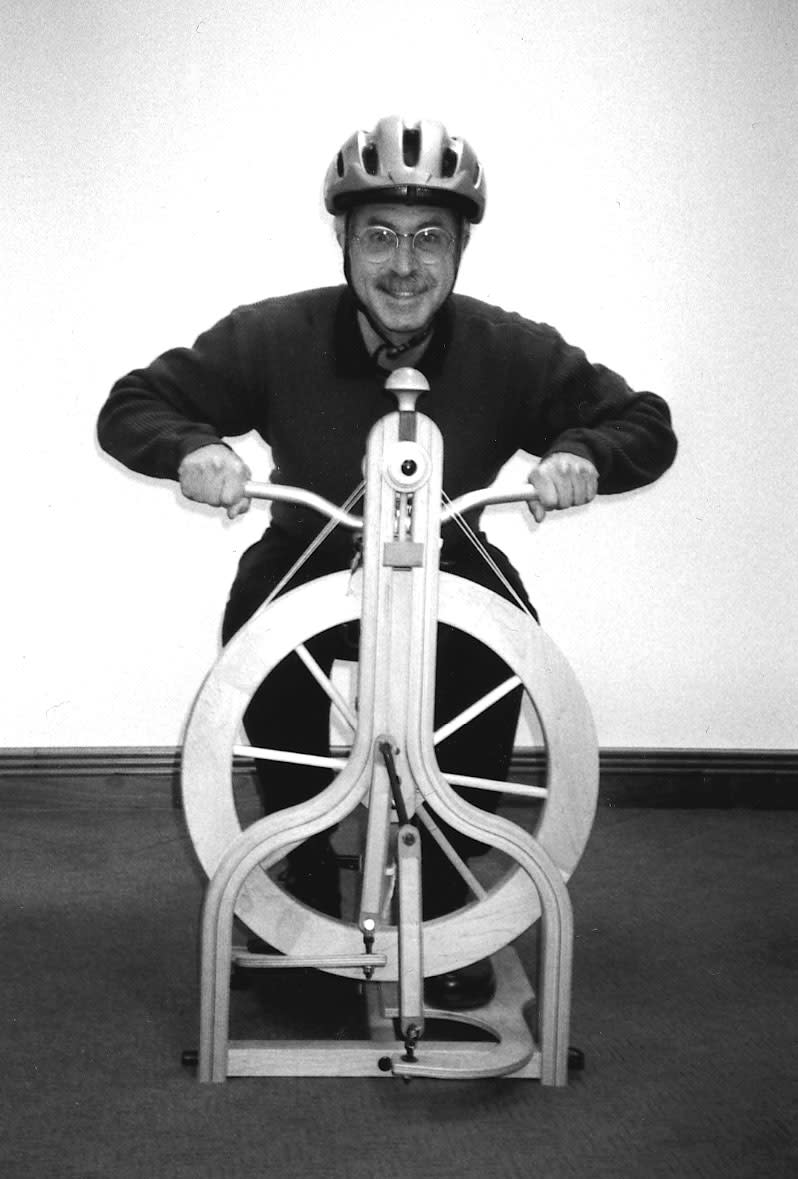 For a photo feature titled "Schacht's visual rejoinder to Amos," the caption reads, "Barry Schacht, an avid bicyclist, has comfortably pedaled (peddled!) his double-treadle spinning wheel around the world."

Although the Matchless wheel Barry is "pedaling" has two treadles, most of the company's wheels made for decades had one treadle large enough to rest two feet on. Now, although a single-treadle version is still available, Schacht Spindle Company makes a few per year at most.

As outrageous as the photo may be, the article that provoked it is even more so. "Where Angels Fear to Tread" by Alden Amos in Spin Off Winter 1997 approves only a few valid reasons for preferring a double-treadle wheel, including if "the spinning device is intended for use as a therapeutic appliance or exercise machine." With only a few other possible exceptions, a second treadle indicated "a generous helping of ad copy." In the article, Alden pointed out that a double-treadle wheel limits the spinner's options for seating positions and requires twice as many foot movements, then backs up his blistering prose with a detailed explanation of wheel mechanics. A few years later, in The Alden Amos Big Book of Handspinning, his remarks were shorter (amounting to "don't bother").

When I first met Alden and wheelmaker Gord Lendrum together in 2006, the spinners in the room kept casting glances in the direction of the two men. Then a new spinner, I asked why, and someone filled me in on this debate so persistent that they wondered whether the discussion might grow heated. Lendrum upright wheels were advertised with a single treadle until 1996, though the one seemed to be leaving room for its twin. You will be hard pressed to find an upright with one treadle these days, and the coveted Lendrum Saxony has two treadles. In the Winter 1997 issue that featured Alden's proclamation, the Lendrum advertisement pictured a double-treadle wheel, the Schacht ad advised spinners to try their new double-treadle wheel, and Majacraft referred to itself as "The Double Treadle Spinning Wheel Company."

There may be an article in the history of Spin Off that has provoked more letters, but I can't think of one. In addition to Barry's photo and half a dozen letters, the Spring 1998 issue featured the article "Treadle Dee and Treadle Dum Version 2.0" by by Robert Koffsky, who asked why our choices should be limited to one or two. "For maximum efficiency, one does not have to be satisfied with only two treadles," he remarks. "Uniformity of rotational velocity will increase with the number of treadles, as each stroke drives the wheel around its proportional part of the rotation. In automobiles, we are not satisfied with one or two cylinders but look for six or eight to insure a smooth ride. The mechanics are analogous, but spinners are usually graced with but two legs, so the remaining four or six treadles would go footless. You could spin with two or three friends and have the ultimate network wheel."

Speculation aside, Koffsky goes on to note what has proven to be the most salient point of the discussion: As of his writing in 1998, 75% of spinning wheel models were double-treadle, and some manufacturers offered double-treadle conversion kits. Necessary or not, the spinning wheel buyer wanted a treadle for each foot. As of The Great Spinning Wheel Roundup of Spin Off Fall 2018, that proportion had grown even more.

But these days, the number of treadles seems to be going down, not up. Spinning wheels without treadles have always been available, though usually not in the bobbin-and-flyer arrangement. Great wheels and charkhas have produced imponderable amounts of yarn over the ages. I see more spinners every day using electricity instead of footpower to make their flyers go. E-spinners come in fewer varieties but nearly as wide a price range as their treadled counterparts. And for ease of positioning, an e-spinner beats a single-treadle wheel any day of the week.

These days, it's far more common to see an e-spinner than a single-treadle wheel. You could say that spinners have voted with their feet, and most have walked away from the single-treadle spinning wheel.

Which isn't to say that most spinners spin two-footed. Just because you have two treadles, it doesn't mean you have to use 'em. 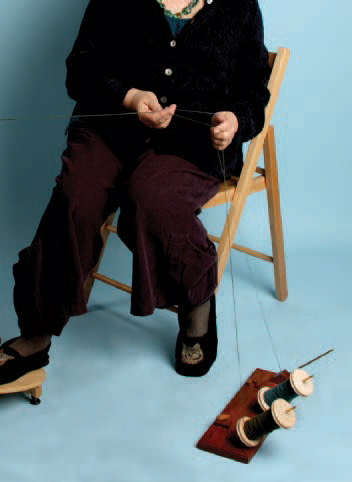 Judith MacKenzie demonstrated plying in The Intentional Spinner with only one foot on the treadles. Photo by Ann Sabin Swanson