Walt Turpening: The Art & Science of Your Best Seat

Former geophysicist, researcher, and technology developer Walt Turpening has developed basic measurements to help us sit comfortably at our wheels.

If you’ve ever been vexed by back or body pain after time spent at the wheel, you’ve no doubt pondered how to find the ideal spinning chair. Antique spinning stools and rigid wood spinning chairs can look like torture devices to the modern spinner. Many spinners have touted adjustable office chairs, padded piano benches, and even recliners as potential seating solutions, but perhaps you’re still looking for a chair that allows you to spin pain-free.

Odds are, you’ve yet to find your spinning-chair solution because you didn’t know what to look for. It turns out that there are methods and measurements to help you find the ideal spinning chair. The equation is based on you and your wheel, so your best seat is unique.

Former geophysicist, researcher, and technology developer Walt Turpening has not only developed basic measurements to help us sit comfortably at our wheels, he has made a booming second career in handcrafting spinning and weaving seats. Best of all, he’s willing to share much of what he has learned over the past 20-plus years as a chair and bench maker.

Even if one of Walt’s coveted, meticulously fashioned, made-to-measure woven seats never makes it into your spinning corner, understanding his customization process can help you find your own best solution for ergonomically correct, pain-free spinning.

The Art Behind the Science

What’s so special about a Walt Turpening spinning chair? Many say it is his way of blending a craftsman’s aesthetic with careful measurements and attention to the specific needs of the end user. Researching and developing a weaving bench eventually led him to create chairs specifically designed for spinners, knitters, quilters, and beyond.

In the early 1990s, Walt was first inspired to create the ideal seat for the fiber artist by watching his wife, Ellen, weaving at her floor loom. While watching her weave day after day, Walt’s technical mind noted that were she sitting up higher (elbows above the breast beam), she wouldn’t need to reach up for the beater and the beat itself would be a more fluid movement. More importantly, she wouldn’t put as much strain on her trapezius muscles. Through discussions with occupational and physical therapists and experimentation, Walt developed his own key to lower- and upper-body measurements and corresponding crucial loom measurements to fashion a comfortable weight-supporting weaving bench. This scientist leaves nothing to chance.

Walt’s bench supports the weaver’s weight on a curved handwoven cotton seat, helping to relieve pressure in the weaver’s lower back. The seat’s height is actually its center point. The front and back of the frame are built lower than this height, so that there is little pressure on the backs of the weaver’s legs—a major cause of lower back pain and foot and leg numbness. The bench’s height ensures that the weaver’s elbows are at or above the breast beam of the loom, taking the strain off shoulders, neck, and trapezius muscles.

Walt’s bench design evolved, and he eventually learned best methods for making his own braided-in-color cord, as well as how to weave the colorful cording into pleasing twill designs—based on Ellen’s initial recommendation of adding color to the once all-white seats. Eventually, he even developed a seat that rests on rails for weavers who work at wide looms.

When the couple’s fellow fiber guild members took notice and began placing orders for their own custom seats, Walt began reconfiguring his weaver’s bench into a similarly fashioned chair to meet the needs of spinners and other fiber artists.

Despite a stream of orders, even Walt had no idea just how much demand there would be for his specialized seats. That is, until he took them to market at Convergence 1998 in Atlanta and left with a three-month order list. Since that time, Walt has had as long as a two-year waiting list for his custom seats. His three-day workshops, in which the students weave their own spinning and weaving benches, have an equally long wait list—and all of this is driven mostly by word of mouth. 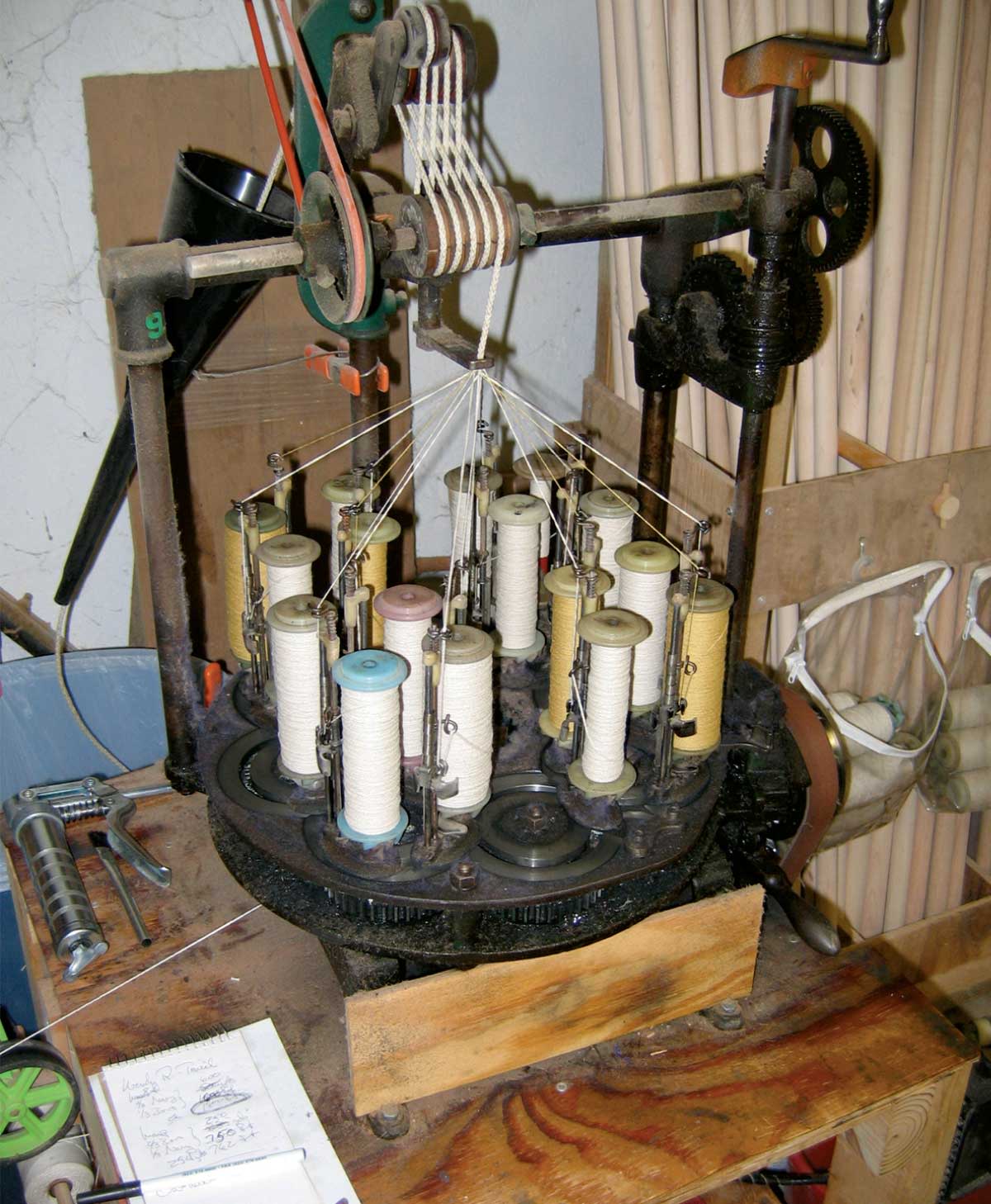 Walt meticulously sets up this round antique braiding machine (similar to Japanese kumihimo weaving, but much faster) to create his cords in gradients or solids.

The Keys to a Comfortable Spinning Seat

We won’t all be fortunate enough to own one of the handful of seats that Walt is able to turn out per month (remember that waiting list?), but Walt wants to share his helpful discoveries so we can all find a chair that matches our bodies and wheels.

Your first keys to comfort revolve around measurements and very simple math—don’t let the fear of either be a deterrent. Although Walt prefers to measure customers himself, that’s obviously not always possible in an online world. Having a friend or loved one take your measurements for you (using a yardstick or other rigid measuring tool) yields more accurate results than trying to take your own, Walt advises.

There are three measurements critical to sizing the proper height and depth of the seat you need for your spinning wheel, he says. The first two are lower leg length and treadle height. Add these two numbers together, and you have the optimal height for the seat of your spinning chair. 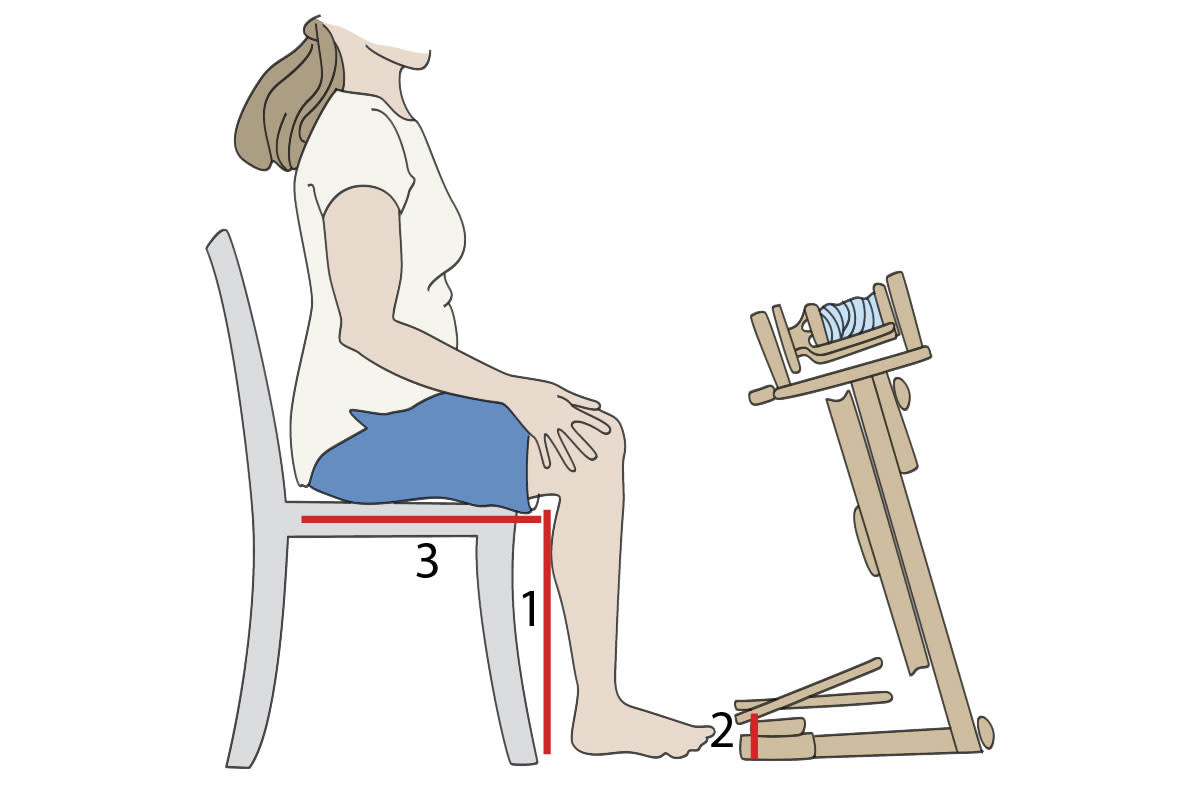 1. Lower Leg
To determine the length of your lower leg while wearing the type of footwear you typically spin in (barefoot, socks, or shoes), have someone measure from the floor up to the crease at the back of your knee while you are standing.

2. Treadle Height
Measuring the treadle height varies depending on your wheel. The crucial spot to look for is the treadle’s point of pivot—its axle or flex point—not where you rest the ball of your foot. This may be a hinge or a rocking axle, and you’ll find it just under where you rest your heel or under the arch of your foot. Go look under your treadle(s) to find the pivot point. When you find the location of pivot, measure from the floor to the top of the treadle. This is your treadle height.

3. Seat Depth
You’ll also need to measure for the depth of your chair seat by having your helper measure you (while you’re seated with legs bent at a 90-degree angle and sitting in a comfortable posture) from the back of your bent knee to the point where your back touches the chair. Subtract two inches from this number. This is your seat depth.

Three measurements to fine-tune your spinning chair. Note that the treadle pivot for the Lendrum Folding Wheel (as shown) is under the spinner’s heel. Other wheels, such as the Schacht Matchless, have a pivot under the arch of the foot and will have a different measurement.

Do You Have More Than One Wheel or Spinning Device?

What if you have more than one spinning wheel and one of them is even an e-spinner? Do you need a different seat for each? No, says Walt. Take the same set of measurements for each wheel and then calculate an average for each of the three measurements. Walt recommends keeping an e-spinner on a surface that helps to mimic the height of a treadle wheel and its orifice. This height differs depending on the age and make of your treadle wheel, so check one with a height you like for reference. Small utility and crafting tables with adjustable “X” frames are ideal, as you can set them up to be lower than today’s tabletops. Also try measuring your end tables. Placing your e-spinner on one of these may land the spinner’s orifice in just the right range.

Your spinning chair may not have one of Walt’s custom woven seats, but to cradle and support your weight for hours of spinning, Walt has suggestions for support:

You never want your knee above your hip. This is one way we strain our lower backs. Your knee should be at or lower than your hips. This position also helps ensure a heel-to-toe movement of the foot, powered by the thigh, when treadling. Antique spinning chairs and stools were designed for the shorter, more petite spinners of yore, not the average size and frame of modern spinners. (Tabletops and counter heights have been inching taller as well to keep up with our growing frames.)

A padded seat is far easier on the body than a hard surface, but don’t forget about the front edge—it shouldn’t press against the backs of your legs. Walt makes up for this by lowering the frame around the front of his seats and benches, but you could seek out an adjustable-height, padded office chair with a lower scooped front lip, then sit atop an added seat pad to raise your sit bones.

When deciding between two chairs, opt for the taller one. This helps decrease the odds of stressing the muscles in your neck and shoulders.

Left: Remove the chair back to use at the loom; remove the entire upper seat (with back) and use as a spinning chair. Right: Spinner’s seat woven in colorful advancing twill.

Comfort for Years to Come

Like the rest of us, Walt is not getting younger, though he has no plans for leaving this work and life he’s woven for himself. Rather, he has opted to phase out back-to-back workshops as well as the most labor-intensive designs in favor of what still works for his body. Walt is not a fan of the word “retire,” having seen others react negatively after stopping work. Walt recommends that individuals near the age of 50 replace the notion of retirement with a daily work habit they love. “Don’t retire to do what you love; change your career instead,” he says.

Of all the knowledge gleaned in his life, this positive outlook and strong daily work ethic may just be Walter Turpening’s greatest discoveries of all.

Deborah Held is both a freelance writer and a full-time, real-life spinster. She blends wool and words in the hopes of sharing with others the positive impact that daily handspinning and her commitment to it have brought to her life. She lives in an Atlanta-area sun-filled lair, where her desk and wheels all sit facing a spinner’s flock of sheep.