Amy Tyler fills us in on what the Bradford system, micron system, and blood system mean and what these systems tell you about measuring fiber.

Confused by all of the numbers and categories that describe fiber and yarn? You’re not alone! In this excerpt from the Spin Off Fall 2016 “Ask a Spinning Teacher: Numbers,” Amy Tyler fills us in on what the Bradford system, micron system, and blood system mean and what these systems tell you about measuring fiber.

The two most common measurements of thickness of individual fiber strands are the Bradford (or Count) system and the micron system.

Also known as the English or Spinning Count system, this system was established as a way to grade the fineness or coarseness of wool fibers. The numbers assigned to various fibers are based on the number of 560-yard hanks of the finest single strand that can theoretically be spun from a pound of wool. The “count” is not a direct measurement; it is an estimate made by an individual—an experienced grader—based on the tactile and visual acuity of that individual grader.

This is a measurement system in which fiber diameter is determined with the use of a microscope. A micron (or micrometer) is a distance measurement that is equal to 1/1,000 of a millimeter (there are 25.4 millimeters in an inch). As far as human eyesight is concerned, it’s a tiny measurement, but it is an actual measurement. Micron counts are not restricted to wool but are used for all fibers that spinners might use.

Also known as the American system, this is a less common measurement of the fineness of wool originally based on the fraction of Merino in the sheep’s genetic makeup. Over time, it became a measurement of fineness not necessarily directly related to the percentage of Merino genetics. Fine is the finest grade, followed by ½ Blood, which originally meant that the sheep was half Merino and the next step down in fineness. After Fine and ½ Blood follow ⅜ Blood, ¼ Blood, Low ¼ Blood, Common, and Braid. The higher the number (closest to 1), the thinner the fiber. 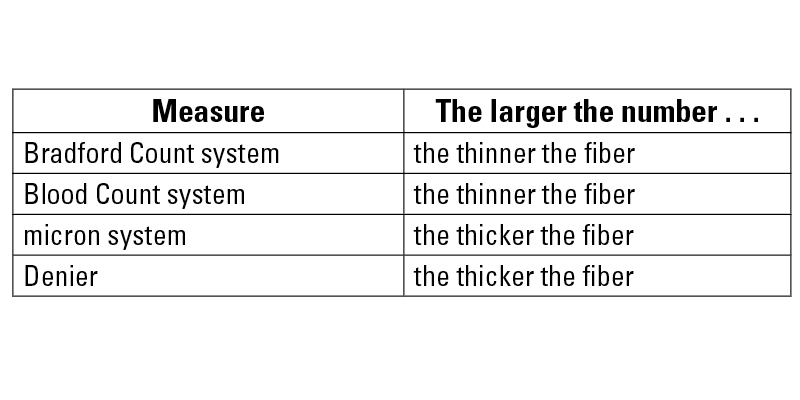 The thing about numbers is that they are sequential: 0 is followed by 1, 1 is followed by 2, and so forth. Sometimes the numbers have quantitative meaning (microns, grist, weaving yarn count). Sometimes the numbers or names represent an order or category, not a size (Bradford count, Yarn Council yarn weights). Regardless, the numbers and names associated with fiber and yarn are guidelines. You can use your own hands to decide whether a fiber is “fine” or “coarse.” You can swatch some yarn to decide whether you’re getting the fabric you want. I find comfort in knowing that hand-produced fiber arts do not need the same precision as getting an astronaut to the moon and back.

That clarifies all of the different numbers used to classify fiber, but what about yarn? What exactly is a #4 weight yarn? Tune in next time, on Monday, March 27, 2017, when Amy explains what all the numbers pertaining to yarn weight and measurements mean.
Editor’s note: Silk and some manmade extruded fibers are measured in deniers. A denier is the mass of strand of fiber fiber 9,000 meters long; the lower the number, the finer the fiber.

Amy Tyler lives in Lake Ann, Michigan, where she loves numbers as much as she loves spinning. She counts the steps every time she climbs the stairs. But she’s pretty laid-back about numbers and fiber. She writes about fiber, numbers, and not numbers in her blog, www.stonesockblog.blogspot.com.