This handspun, crochet blanket began when Danielle needed to make a small blanket for her first grandchild.

I am a freelance illustrator of children’s books. Also, I stitch freestyle embroidery, design teddy bears under my brand name Pussman & co on Etsy, and I like to make all kinds of stuff on the sewing machine, especially bags. I always use a lot of color in my work and never use just plain colors.

I became a handspinner about three years ago. A friend of mine had wanted to learn to spin for a long time, and there was a two-day spinning class in our village, so she asked me to join her. Truthfully, I was not really tempted to do this because I thought, “I don’t want all of that fluffy wool flying around in my living room.” But in support of our friendship, I went along, and it turned out it wasn’t all that fluffy. I was hooked instantly. In the first class, after a few hours of spinning chunky, curly, over-twisted wool yarn, I made a spindle out of a chop stick and a Meccano wheel. I learned to draft using the park and draft method on that handmade, wobbly spindle. I ended up ordering an Ashford Kiwi wheel the next week, and a few months later, I bought a Schacht Matchless.

This crochet project began when I needed to make a small blanket for my first grandchild, Lilly. I had a lot of hand-dyed roving, including Romney, Merino, and other unidentified fibers, that I had received as gifts. The spinning fibers were just sitting in a bag and taking up space in my house. 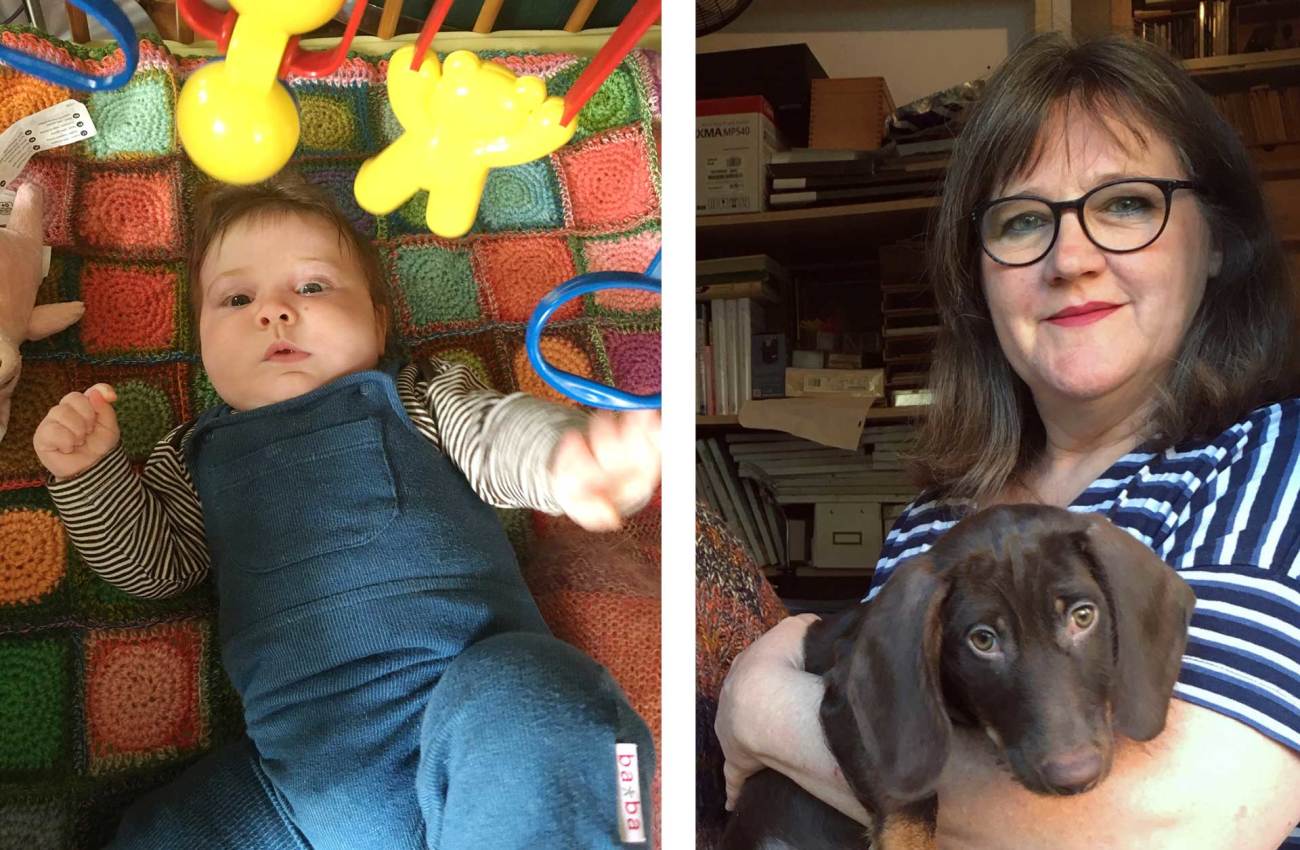 Left: Danielle’s granddaughter Lilly is the fortunate recipient of the colorful blanket. Right: Danielle with her dachshund.

I am fond of the neutral scarf designs of Sophie Digard and the colorful scarves from A Very Fine Yarn (@sophiedigardofficial and @averyfineyarn on Instagram, respectively). But these scarves are all made of fine yarns, threads, and embroidery floss, and I just don’t have that kind of patience. Using these designers as inspiration, I thought it would be fun to invent my own blanket, using my hand-dyed fibers for the project. Also, since I spin to relax, I didn’t want to overthink the spinning. The blanket had to be a mix of different weights of yarn.

I made the crochet pattern up after watching a YouTube tutorial about how to turn a circle into a square. I started crocheting circles within a square outer border, but some ended up being larger than others. That was kind of a problem. If the circle was already too big, the final square would certainly be too big, as well. I decided to leave those thicker yarn circles as they were and make the smaller ones into squares.

In addition, I was trying to figure out what color to use to bind all of the squares together, and nothing appealed to me. I took a look at my yarn stash, the leftovers from a lifetime, and even unused sock yarns. I came across a ball of yarn, Schoppel Wolle’s Zauberball Crazy, and it matched perfectly with all of my colors. Although the yarn was thinner, that was no problem because I used the same crochet hook. The looser gauge gave my blanket a really drapey feeling that I found very nice. And the thinner yarn stretched in all directions, filling in spaces where my circles and squares were uneven. This allowed the blanket to lie flat.

Fiber preparation I used hand-dyed roving, making rolags and mixing different colors on my handcards. The new blends became slight variations of the original colorways.
Wheel system/spindle I used suspended and Turkish spindles. My preferred spindles are made by IST Crafts on the Isle of Wight in the United Kingdom.
Drafting method I work fast and always allow some twist in my yarn supply. I draft while my spindle turns and spin without thinking. I like to call this yarn “my default thickness,” but the thickness can vary a little.
Singles direction Z-spun.
Singles wraps per inch About 22 wpi.
Ply wraps per inch About 11 wpi.
Yarn classification/weight Handspun, about worsted weight; commercially spun wool sock yarn, Schoppel Wolle’s Zauberball Crazy.
Crochet hook Size 10 (8 mm).
Finished size 31½" × 39½" (80 ×100 cm). 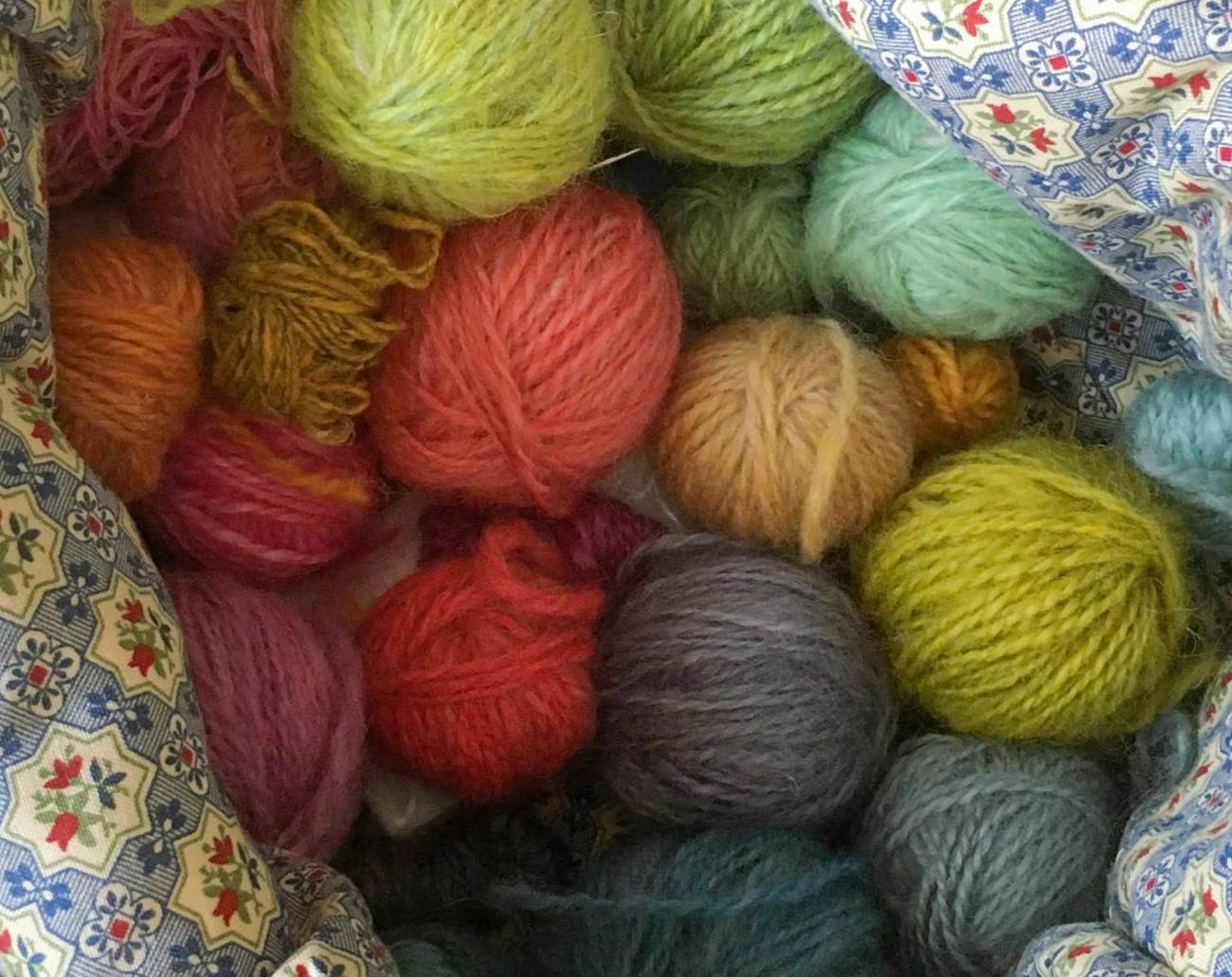 Danielle used small, colorful bits of handspun for her blanket.

Have a finished object to share? Tell us about it! Contact [email protected] to submit your project.