When designing his spinning wheel, Scott Porter threw out anything he didn’t have to have.

Scott Porter and his wife, Krista, wanted a farm before they had kids, and decided Jacob sheep were perfect for them. They loved the idea of raising the animals, using the wool, and selling the finished product. As their nieces and nephews grew, they taught them to crochet, knit, and spin (in that order), and Scott felt bad that they couldn’t give them a spinning wheel as easily as they could give them a hook or a pair of needles. That is why he set out to develop the DODEC spinning wheel (named for the dodecagon that serves as the drive wheel).

In 2009, Scott saw a video of Rachel Brown spinning on a spindle wheel. In the video, she explained the benefits of spindle versus flyer. Then in 2010, he took a trip to England and Ireland and saw that basic spindle wheels were very common. At the Sheep and Wool Heritage Centre in Leenane, County Connemara, Ireland, he saw a great wheel that had nothing more than a board with holes serving as its mother-of-all. The spindle was a carved stick suspended between grass loops, one holding it toward the board and the other holding it toward the wheel. That was it, no bearings or pulleys, just a board and some thatch. Inspired by Rachel’s tutelage and Irish ingenuity, he felt he could make a wheel from nothing. 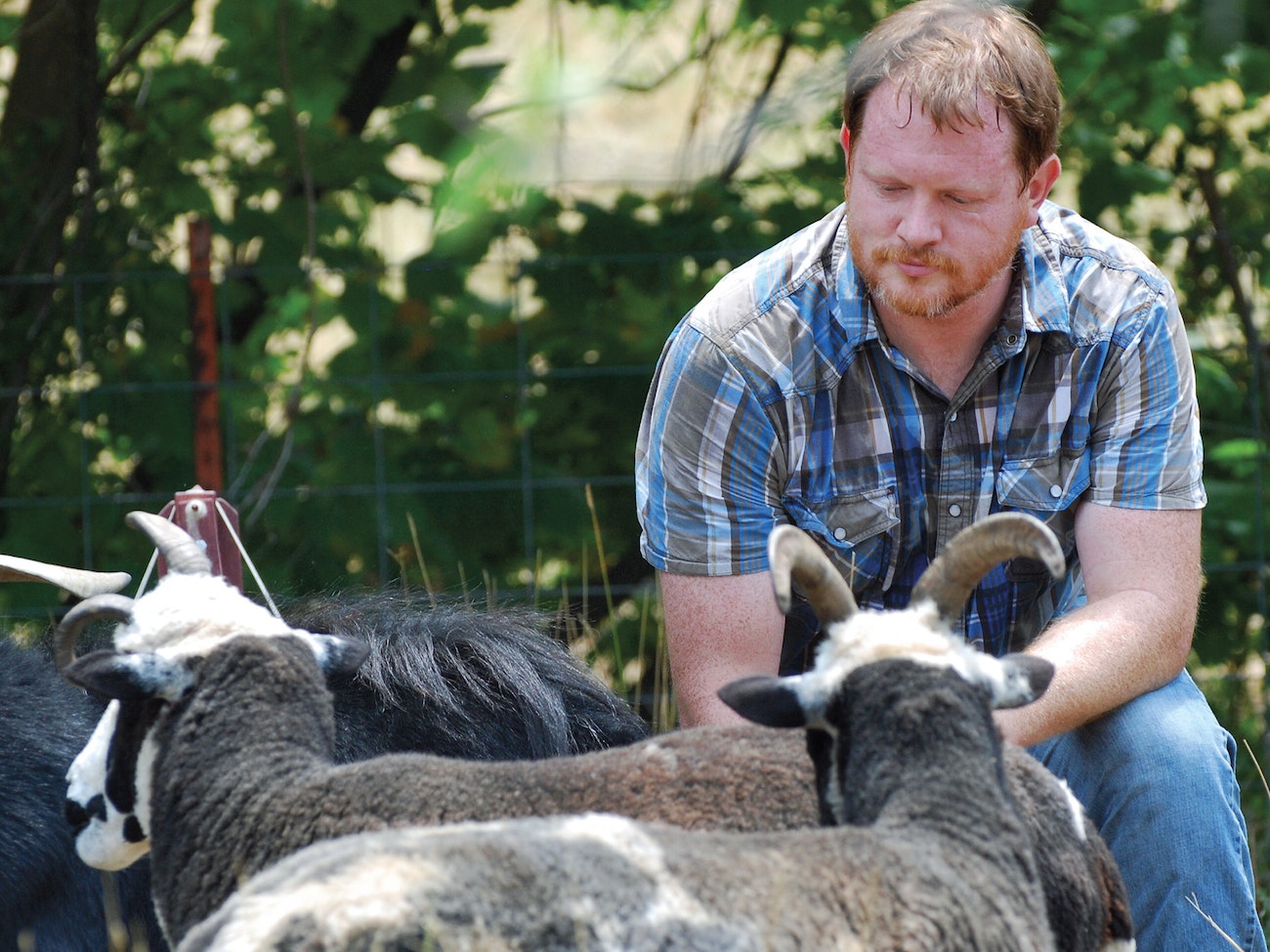 Scott Porter and his Jacob sheep

He set out to make a wheel for his niece Erica’s birthday. He tried and tried but couldn’t make it work. Her birthday came and went. After taking a break, he decided to try again. Growing up, Scott would concoct elaborate “inventions” that fell to his father to make a reality. Anytime he went to his dad with a project, his dad would ask him to boil it down to the essential function. In a nutshell, this is what Porter had to do with the spinning wheel.

Scott started from the beginning and threw out anything he didn’t have to have. Originally, he thought the drive wheel needed to be made up of three circles cut from plywood sandwiched like an Oreo, but he soon realized the drive wheel was the thing that wasn’t working. As he tried to cut back the weight, he learned that plywood was much heavier than natural wood.

The question then became how to make a wheel out of boards instead of sheets. As he played with the idea, he realized he didn’t need three layers; he could do it with one alternating layer of one-by-fours. He didn’t know if a polygon would work in place of a circle but knew the more sides, the closer it would be to a circle. Almost immediately, he realized that twelve was the right number because of how alternating wheel segments would attach to the crossbar.

(Left) Scott, his wife, Krista, and their son, Tanner, spin on the DODEC spinning wheel. (Right) Two of their Jacob sheep

It all came together quickly after that. As he threw out everything that wasn’t crucial, the wheel became more functional and easier to construct. His idea evolved from somethingLmost could build with the help of a woodworker to a wheel spinners could build themselves. He made that a priority.

This year, Porter’s niece got her wheel for her birthday. He was so proud, he posted some project notes on Ravelry (username: Bishopofknit). A week later, he made a short video to show the wheel in use. At this point (literally overnight), it was made a favorite by three hundred Ravelers. There was an outcry for detailed plans. He never had intentions of making money by selling the plans and once he realized how many knitters and crocheters could finally become spinners, he knew that it had to be free. His niece loves her wheel and spins on it day and night. He is currently building another wheel for his other niece, Reagan, as well as fielding questions from fellow crafters about how to build their own.

Visit spinoffmagazine.com to download plans for the DODEC spinning wheel.

Want to learn more about various spinning tools? Check out the Fall 2012 issue of Spin Off.

Also, remember that if you are an active subscriber to Spin Off magazine, you have unlimited access to previous issues, including Fall 2012. See our help center for the step-by-step process on how to access them.

Liz Good is a former Assistant Editor of Spin Off magazine.