This well-known fifth-generation Navajo weaver serves as an ambassador for her culture and traditions, carrying her family’s textile heritage forward.

Lynda Teller Pete grew up in a weaving family and carries on the traditions today. Photos by Joe Coca

While we were at SOAR (the Spin Off Autumn Retreat) in 2021, we spent time with instructor Lynda Teller Pete. During the event, she taught a 2-day intensive course on weaving Navajo tapestry that was immensely popular with attendees. As she demonstrated the art of traditional Navajo weaving, students also learned about Navajo history, the culture, and the weaving legacy of Lynda’s family.

The winding path that eventually led Lynda to teach and co-author a book is a fascinating story we wanted to share with our readers. We hope you enjoy learning about this multifaceted teacher and weaver, and visit our Instagram page this week for even more on Lynda.

Growing up at the Two Grey Hills Trading Post in the Navajo Nation, Lynda Teller Pete was steeped in the culture of fine weaving. Hearing the thump and swish of her mother’s beater on fine warps; hearing her father negotiate purchases and sales of rugs with local weavers and visiting dealers; watching her older sisters learn spinning and weaving at their mother’s knee; listening for the bleating of the trading post’s flock of sheep—these were some of the sounds and sights of Lynda’s early childhood. These were her foundations.

Later, during years at boarding school with infrequent visits home, she became adept at all the skills demanded by white, or biligáana, culture. As an adult with a government job and an urban home away from the Navajo Nation, she learned to strive for balance between her two worlds—the world of her heart and heritage, and the world of her livelihood. There came a time, though, when she made a choice.

She chose to give up her career and return to her roots. In this, she was supported and encouraged by her sister, Barbara Teller Ornelas, and her husband, Belvin Pete, who also grew up in a weaving family. She entered the teaching world gently as assistant to Barbara, after their mother “aged out” of that role. They taught together at Idyllwild Arts Academy in southern California for several years, and Lynda became more and more attuned to the needs of students who didn’t know the first thing about a loom. She learned to coach and encourage excellence, while instilling an understanding that there’s a spiritual world in the weaving beyond warp and weft. She encouraged Belvin, trained as a mechanical engineer, to design beautiful and functional tools for their students—an important part of the process of creating a worthy fabric. 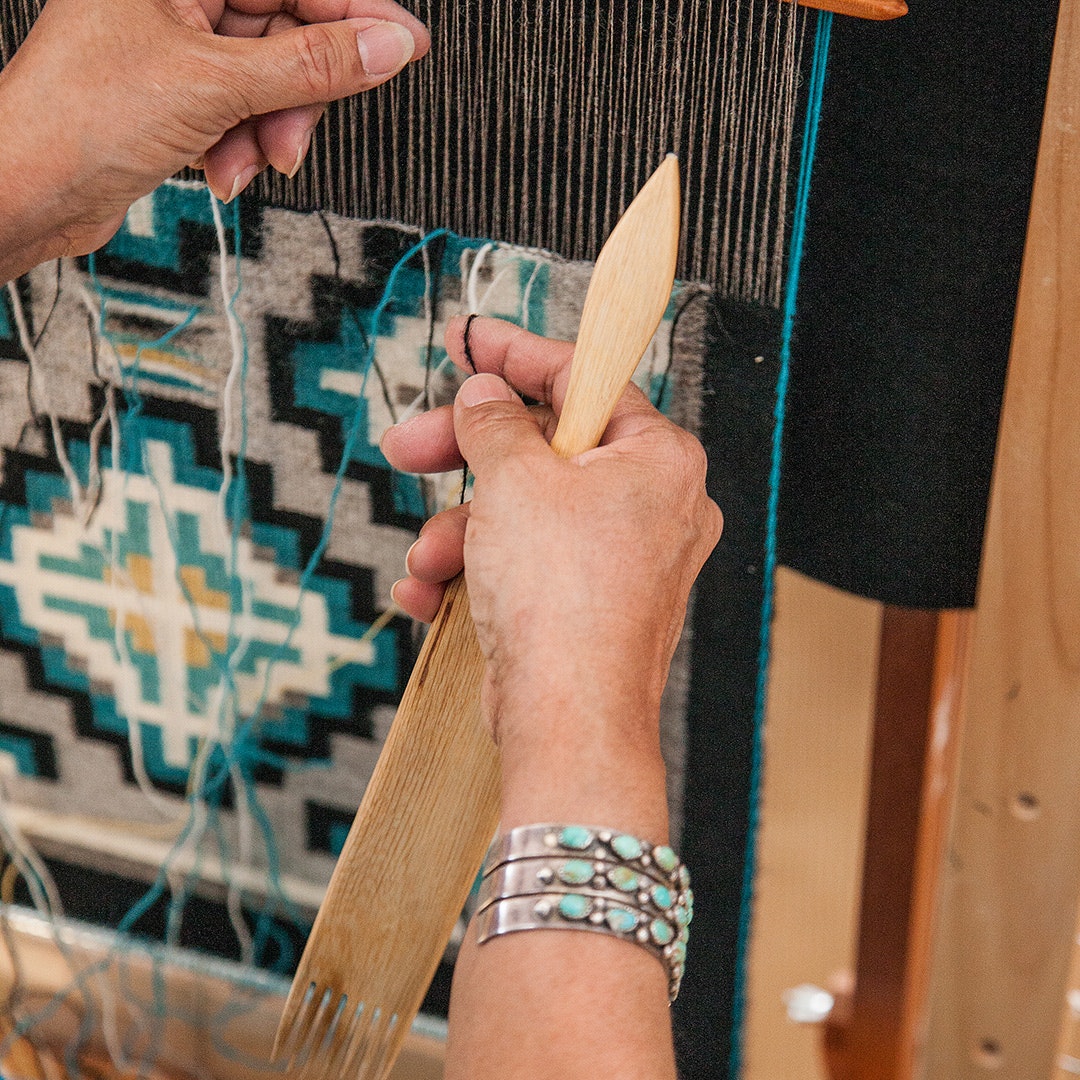 Lynda at the loom using some of her beautiful tools

She found herself taking notes, based on student questions. The notes accumulated, and before long she had a multipage booklet that became an important teaching tool. This became the beginnings of a book that she co-authored with Barbara, How to Weave a Navajo Rug and Other Lessons from Spider Woman (Schiffer Craft/Thrums Books, 2020).

As time passed, the Teller sisters felt a strong call to teach their Navajo sisters, women who didn’t have the family history or experience, but who had the desire to carry their peoples’ textile heritage forward. They worked with the Heard Museum in Phoenix as well as other venues in or near the Navajo Nation, who often provided scholarships and other assistance for students young and old. Today, Lynda and Barbara teach far and wide: New York; New Hampshire; Washington, DC; even Oaxaca, Mexico; as well as in New Mexico, Arizona, and California. Some of their students return again and again, building skills and finding their own cultural expression in the language of the loom. 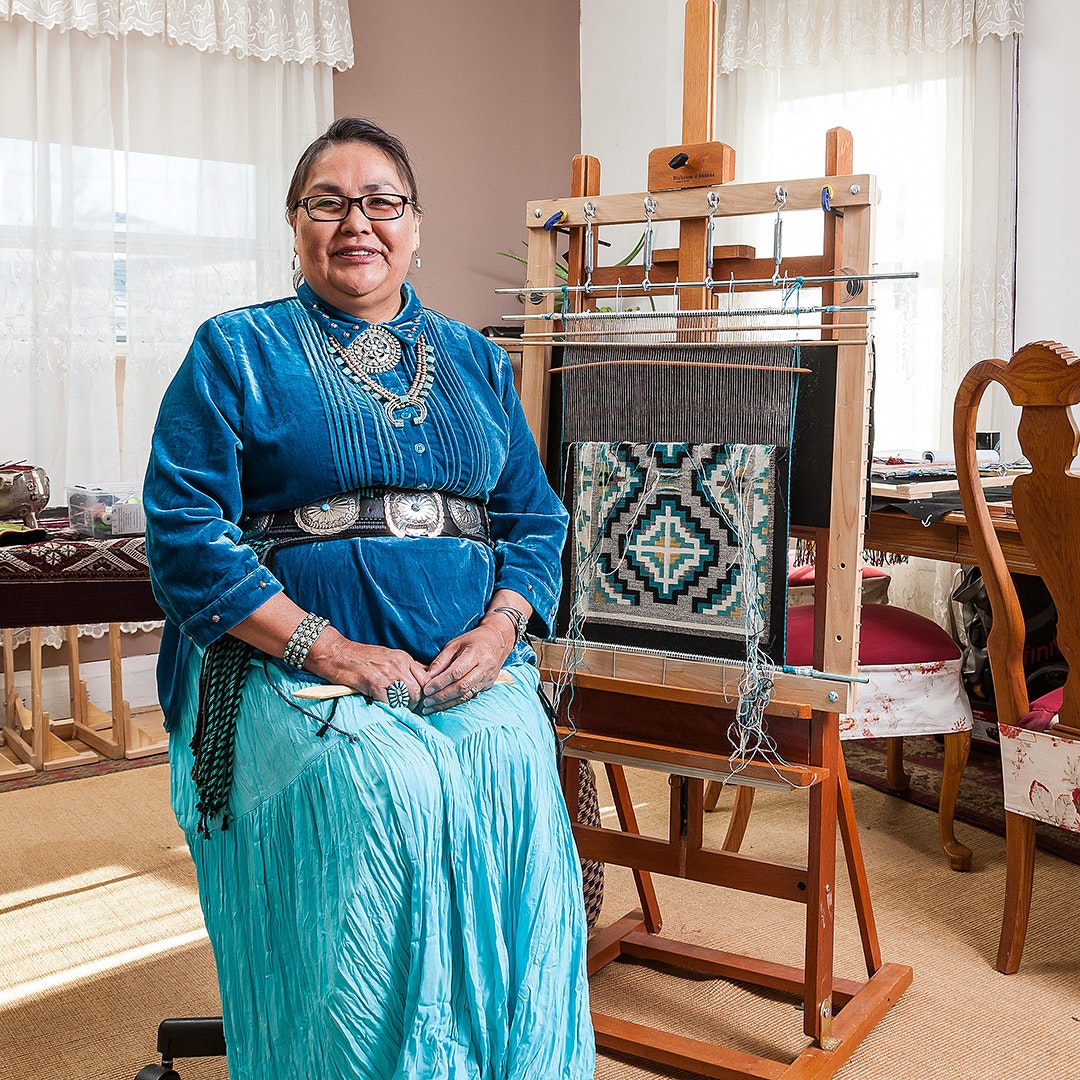 Today, Lynda teaches weaving workshops across the country and around the globe.

For Lynda, life is not just teaching, though. Late into the night, you can hear the thump and swish of her beater as she produces exquisite tapestries using the thread-fine yarn her sister spins. The weaving remains the heart and soul of her life.

Check out our Instagram page this week for Linda Ligon’s video interview with Lynda from SOAR 2021, plus a bonus video where Lynda talks about one of her projects! And visit our SOAR website to learn about our 2023 event and world-class instructors.

Linda Ligon is a cofounder of Long Thread Media.