One fiber artist found a woman’s treasured chest of flax strick and used its contents to connect spinners from around the globe.

I am a spinner and natural dyer from the Mühlviertel region in Austria. I found a treasure—a chest full of hand-processed flax stricks, neatly stacked and at least 80 years old. It was the proud possession of Berta, a farmer’s daughter who kept the fiber safe her whole life. In an effort to bring women together, I have given away the treasure I found, and now, Berta’s flax has traveled the world, uniting textile artists.

In the early 1950s, Berta Pumberger-Windhager married her husband in a tiny Austrian village. Following the local tradition, Berta brought two chests with her to her new home. One was filled with woven linen, and one was full of unspun flax. In some parts of Europe, this was a common dowry. The chests enabled women to dress their households, and even more importantly, flax and linen were of great value. This fiber belonged to the woman alone and served as an insurance policy for whatever life might bring.

By the time Berta received her chests, the custom was more symbolic. The necessity to spin and weave for loved ones no longer existed. Nevertheless, Berta treasured the flax and linen. Until her death, she made sure that the fabric and fibers where dry and neatly tucked away. 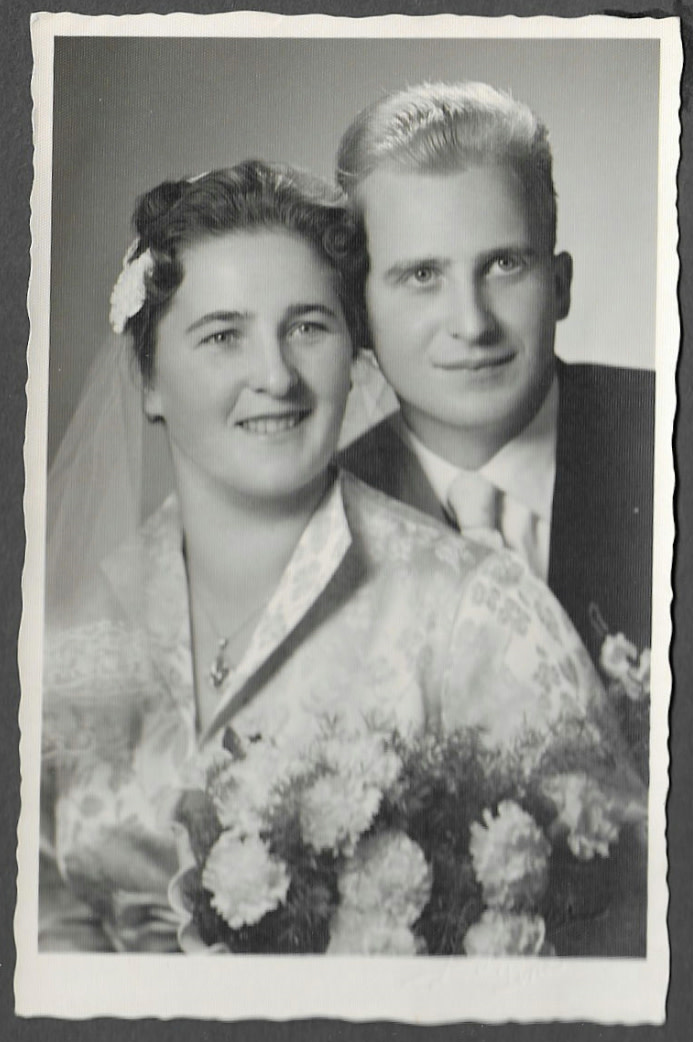 Berta Pumberger-Windhager with her husband on their wedding day.

Even though the Mühlviertel was known for growing flax used throughout Austria, and tons of it have been produced, spun, and woven over the centuries, it’s rare to find flax in such good condition today. Until the 1950s, more than 60 weavers’ workshops and small factories turned the region’s fine flax, which was spun mainly by women in their homes, into high-quality linen and towels. Coarser fabric was woven at the farms, sometimes by traveling weavers or sometimes by the boys of the household. The rough fabric was called rupfert. It was full of leftover flax skin, or boon, and was used as flour sacks or work shirts for the men. Boys often complained about the shirts being itchy, but it was not allowed to take off one’s shirt during work.

In the Mühlviertel region, men also received dowries. Men brought hackled flax in chests, which were sometimes lovingly decorated with paper flowers, with them into their new marriage homes. Many girls came from small farms that were extremely poor and where land was used only to farm food. Bigger farms had enough acreage to plant flax, too. In cases where a girl married into a bigger farmhouse, it was the men’s turn to provide the flax. 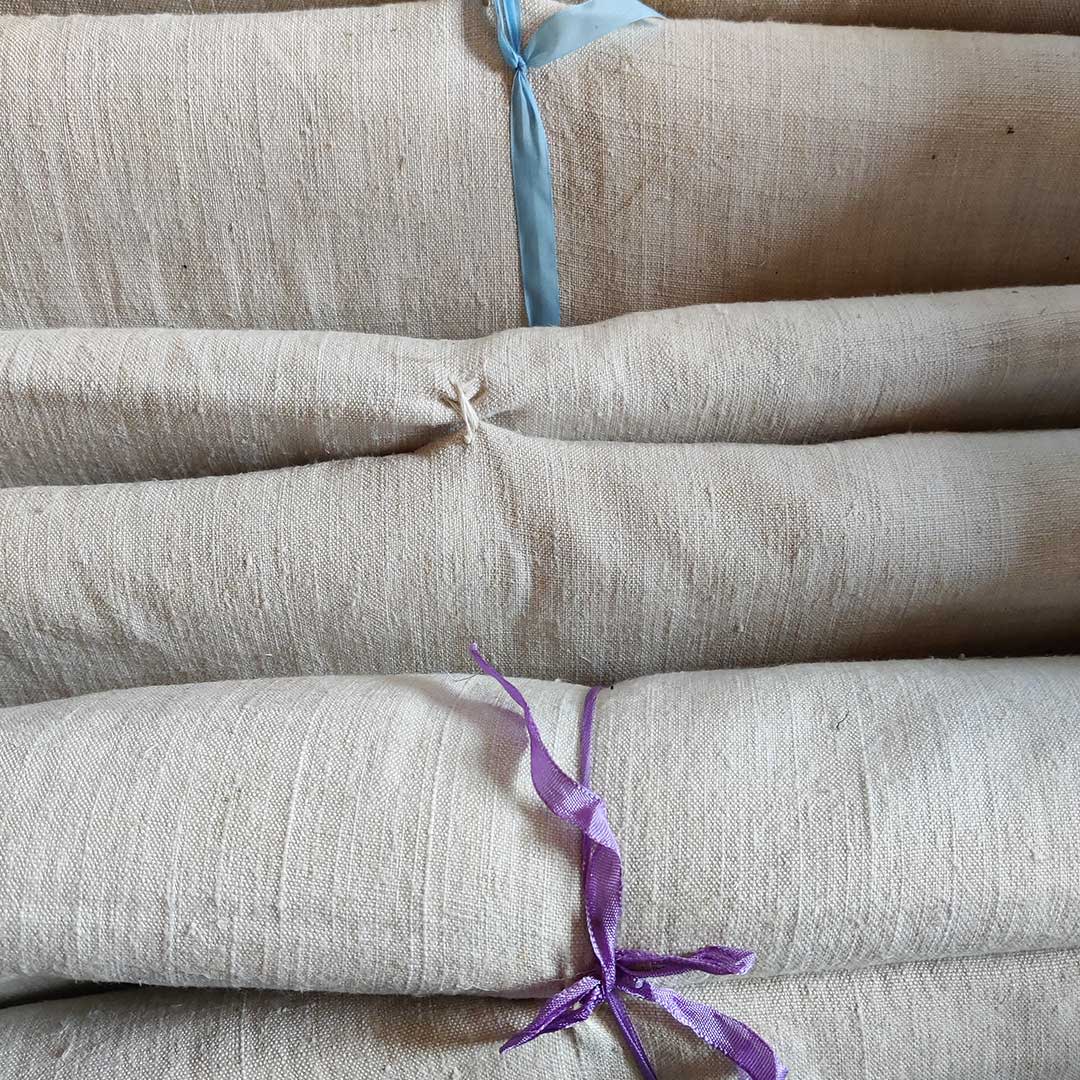 The tradition of flax-dowry chests gradually ended in the 1970s. During the 1970s and 1980s, when many older houses were being updated or taken down for new buildings, dowry chests came to be thought of as a nuisance. They were heavy because they contained at least 80 kilos (176.4 pounds) of flax. The contents were unwanted by many and only served as a reminder of hard work. So, the chests were burned or buried. I can hardly imagine how many yards of handwoven linen and stricks of flax have been destroyed, but there are still some of those treasures left and hidden in basements and attics.

Berta’s hidden treasure is now enjoying a new life. I started a project called “Berta’s Flax” where I am giving away Berta’s stricks to women all around the world, and recipients are working with the fiber and connecting online via Facebook. Those stricks are the result of hard work and of hopes and dreams, and they should be used and not forgotten in wooden chests. And this project has given back a feeling of pride to the older people in my area who once worked the flax themselves in their younger years. 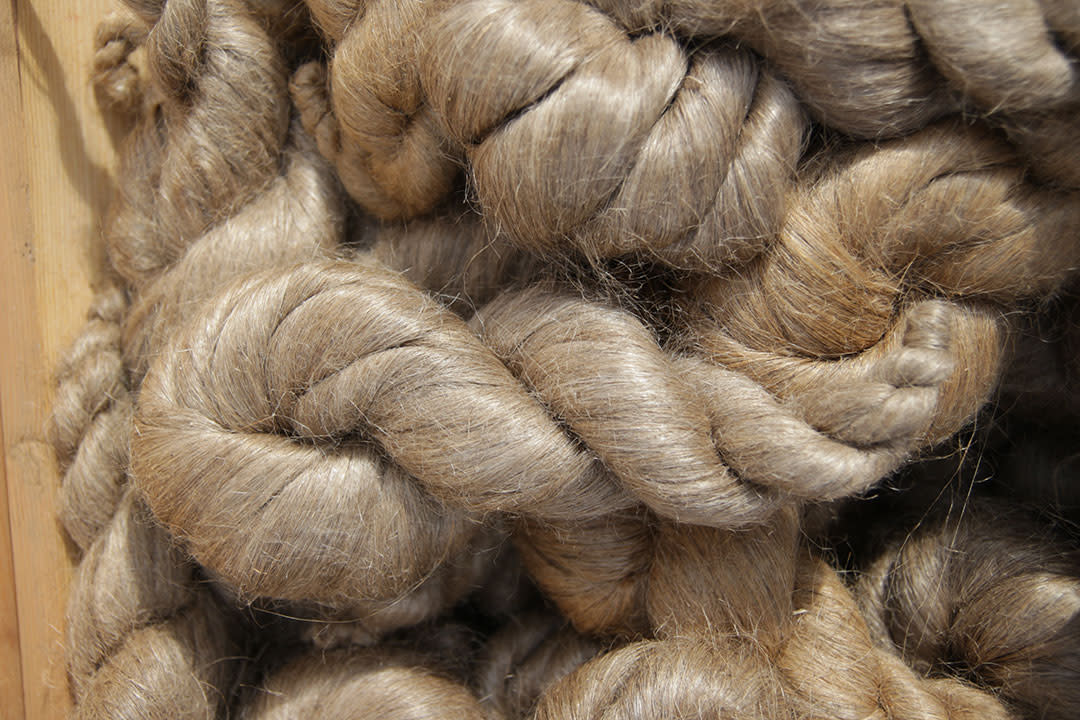 Berta safely stored her treasured flax stricks, and now they are shared with spinners around the world.

Not only have international spinners and weavers been intrigued by the project, but the original producers of the stricks have come forward. Daily, I receive phone calls from older folks telling me about their dowries and their work with flax. They are so happy to share their stories. Now, Berta’s flax has company, including Maria’s flax and Elisabeth’s and Franz’s and many more are still arriving. The project is such a great way to keep history alive and to connect the world with hoar, Austrian for flax meaning hair.

To learn more about Berta's Flax, visit the Facebook group.

Christiane Seufferlein is a spinner, natural dyer, fiber addict, and history lover. She lives with her family on a small farm in rural Mühlviertel, located in Upper Austria, and has held craft workshops for the past five years.