Boro for Handspinners: How to Make the Most of Precious Handspun Yarn

How one handspinner takes inspiration from a Japanese textile tradition and uses every precious bit of leftover yarn from her knitting projects to craft beautiful woven projects.

Left to right: On the left, Sarah's hare and moon tapestry used up almost all the yarn left when the waistcoat fabric was cut from the loom. In the center, lengths of laceweight rest on Sarah's favorite Echo Flower shawl knit in handspun cashmere and silk. On the right, Sarah wears the waistcoat she wove from remnant yarns. Photos courtesy of Sarah Wroot

The beautiful Japanese textiles created when hard-worn indigo fabrics are mended time and again are known collectively as boro, which comes from the Japanese term boromono, roughly meaning “rag things.” The philosophical basis of boro textiles stems from the Japanese concept of mottanai, the idea that nothing should be wasted. This concept speaks to my understanding as a spinner and weaver that textiles are valuable. Now when I look back, I realize that, as a handspinner, I understood the concept of mottanai long before I learned the word.

The Love of Lace

I love spinning fine yarn. It makes the most of luxury fibers, such as cashmere and silk, and there’s a real sense of accomplishment as yard after yard of fine, consistent yarn flows onto the bobbin. Fine yarns spun from hand-dyed luxury fibers shine in knitted lace.

Before I learned to weave, I knitted a lot of lace shawls. I had to do something with all that yarn! There were far too many shawls to keep, let alone use, so I gave most of them away. Eventually, I didn’t even photograph or record them on my Ravelry project pages. But I had the leftover yarn to remember them by. 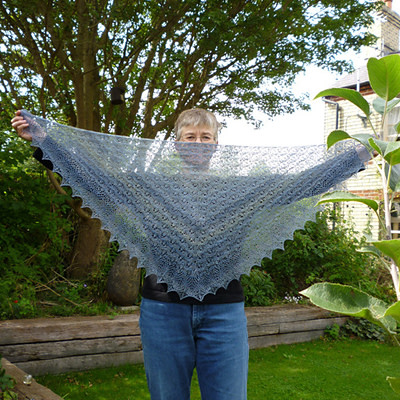 Spun on a spindle while Sarah travelled, some cashmere/silk spinning fiber she bought at her first Spin Off Autumn Retreat (SOAR) became an Echo Flower shawl.

My bag of odd balls of yarn grew larger until, as a new and enthusiastic weaver, I decided to combine them all as a warp on my new loom. What could go wrong? Almost everything. This was a bad idea for so many reasons! If I’d known more about weaving, it would have been easier, or I wouldn’t have done it at all.

The most significant problems were:

But I persevered and that fabric became a waistcoat. 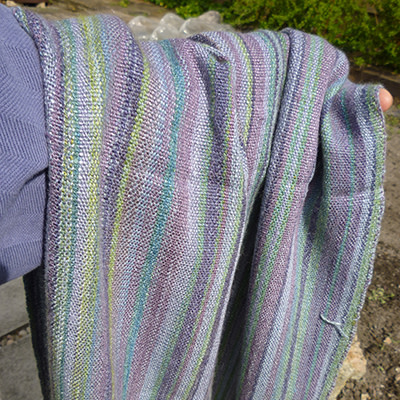 Sarah’s handwoven fabric, which became a waistcoat. Every color is yarn from a shawl, or intended for a shawl, except for the lilac silk singles, which was a mistake but found a final home here. Each yarn reminds Sarah of a shawl. The dark purple was a shawl she gave to a friend on the steps of the British Museum, the bright green was weft from the Spring Flood shawl given to her sister, the blue-green silk/Merino was the Simurgh shawl she gave to a neighbor recovering from cancer.

I offer the following advice so readers can learn from my experience: As a new weaver, I did not know at the time that sizing the skeins of yarn before winding the warp, sizing the wound warp, or even painting the sizing on the exposed warp while on the loom would have reduced the fuzziness and made it much easier to weave. 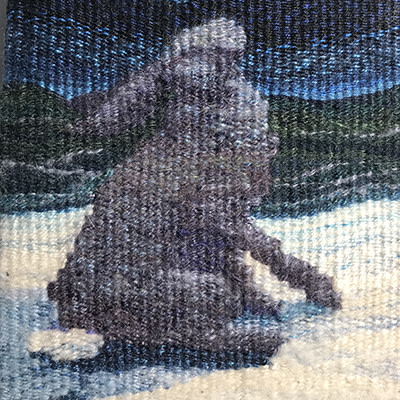 Sarah used the thrums from her warp to weave tapestry of a hare. A white silk moon shines from a sky of indigo cottons and silks. Low hills of green and indigo silk rise behind a hare in purple cashmere and silk, as it sits on a snowfield of blue and white silks and wools, gazing back at the moon.

After using my handspun for weaving, I had a bag of thrums, short lengths of waste yarn from that warp, the last remnants of my laceweight yarns and shawls. Still too precious to discard, the little bag of memories sat in a box until I started to weave tapestry. I discovered that thrums are the perfect length and weight for the small images I wanted to create.

Sarah Wroot is a contributor to PieceWork and Spin Off magazines, and she records her textile explorations at www.wroot.com.