Get Those Wheels Spinning for the Tour de Fleece!

For spinners and cycling fans, it’s an exhilarating, challenging, and gorgeous three-week event: the Tour de Fleece. Or France, for those who require two wheels.

History of the Tour de Fleece

In 2006, spinner and knitwear designer Star Athena invited 15 friends for the first Tour de Fleece. Closing her post announcing the event, she said, “In the event I am the ONLY person doing this, no public mocking. Even Lance had to start somewhere.” The Ravelry group for the Tour de Fleece now includes well over 8,000 members—almost 4 times as many riders as have started the Tour de France in the same time period. 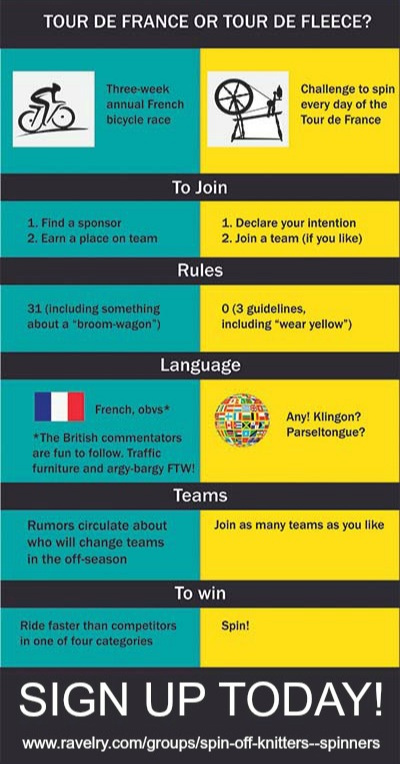 Language:
Tour de France: French (obvs), though my favorite commentary is British, because who doesn’t want to know about traffic furniture and argy-bargy?
Tour de Fleece: Any language welcome

Teams:
Tour de France: Rumors circulate about who will be switching teams in the off-season
Tour de Fleece: Join as many teams as you like

Intrigued? Join us! Watch this space for weekly updates. Allons-y!*

*That means “Let’s go!” My Francophile streak comes out in force in July, when my husband gets tired of looking at chateaux and listening to me practice my French accent. It’s just as well that I sit around and make yarn in the basement for weeks.