I fell in love with indigo textiles while living in Japan, where this unique dye—the only colorfast natural blue dye—was used for centuries to color everything from humble diapers and undergarments to ornate bedding covers and ceremonial robes.

The indigo is seen here before harvesting. The leaves of a fully grown “Polygonum tinctorium” plant are about 6" (15 cm) long. Photos courtesy of Rowland Ricketts

I had moved to Japan after graduating from college, and like most recent graduates, I had no idea what I wanted to do with my life. After years of dabbling in wood-block printing and photography, I met some artists who were working with natural dyes. They in turn opened my eyes to the tradition of indigo in Japan, and I soon realized that all of my interests—in growing things, in working with my hands, and in creating something I could truly believe in—converged in this historical dye and its elaborate process. 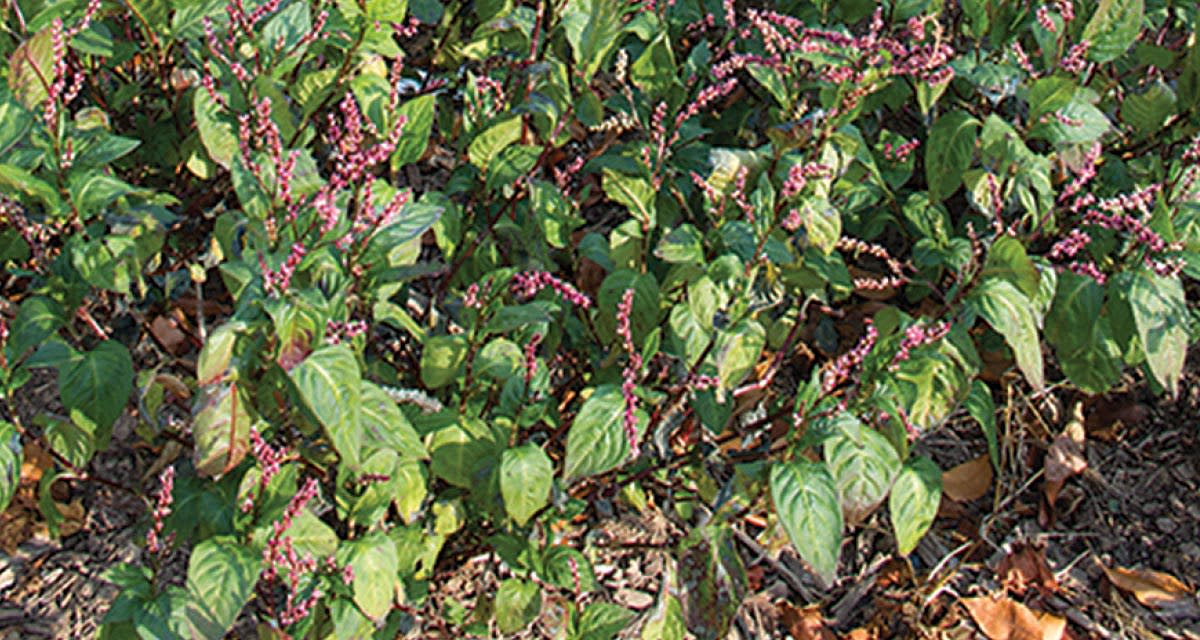 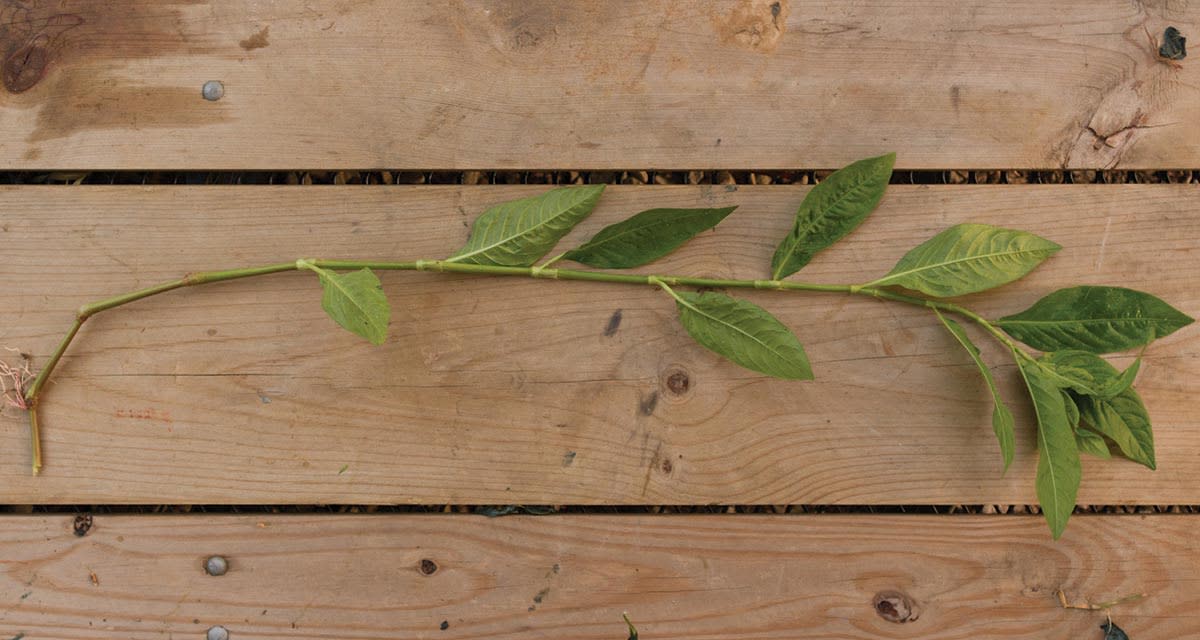 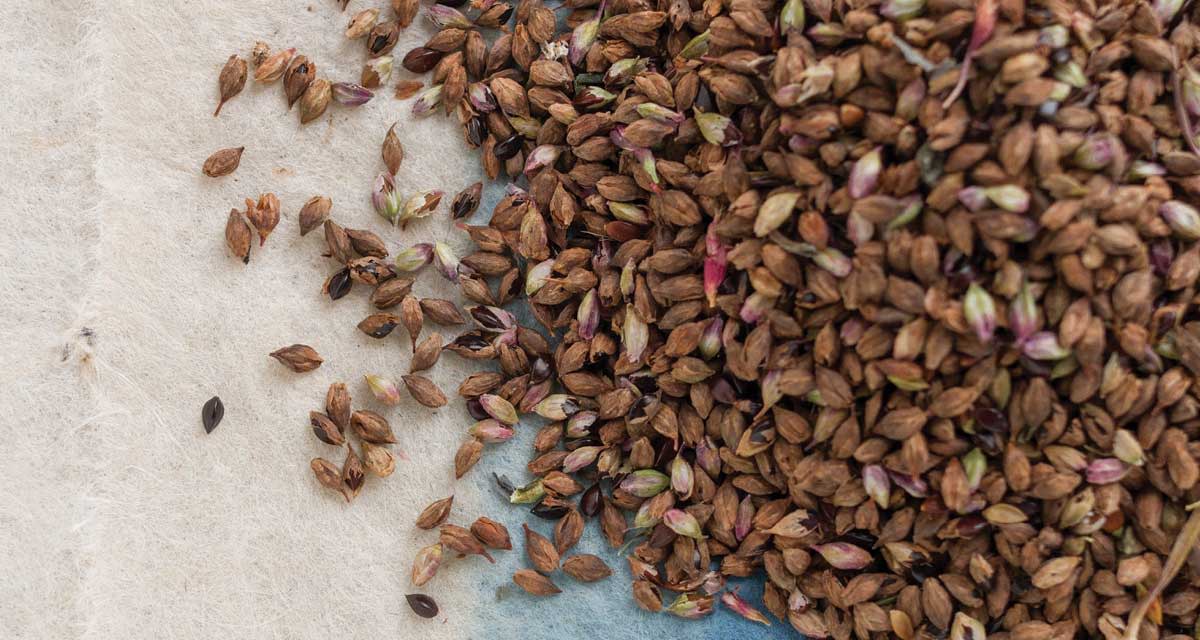 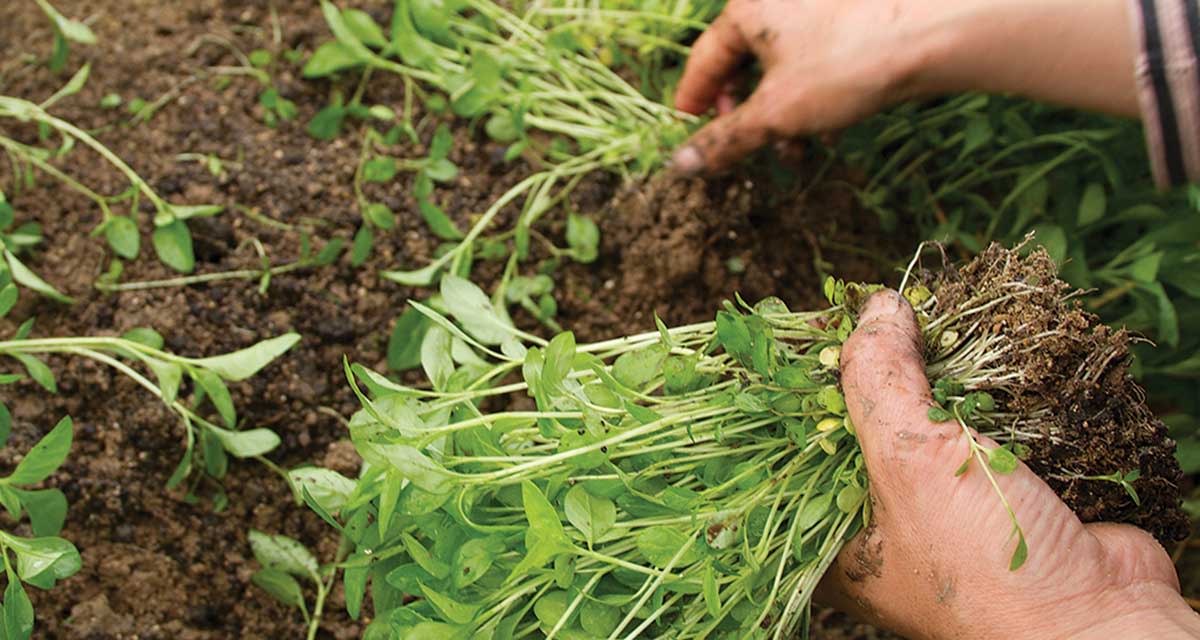 Gathering the indigo seedlings for transplanting.

Indigo-bearing plants are found throughout the world, and each culture developed its own method of processing the plants to extract or concentrate the dye based on the environment and climate. The natural indigo most Americans are familiar with today is indigo precipitate. This indigo dyestuff is made by steeping indigo-bearing plants (mainly Indigofera tinctoria) in large vats of water for a few days until the leaves decompose and release the indigo within. This process originated in tropical climates, where temperatures during the harvest and processing season keep the steeping water warm, essential to the quick decomposition necessary for making a high-quality dye. Indigofera tinctoria is the plant that most Westerners think of as “the indigo plant,” but it is actually just one of more than twenty plants found throughout the world that produce indigo. 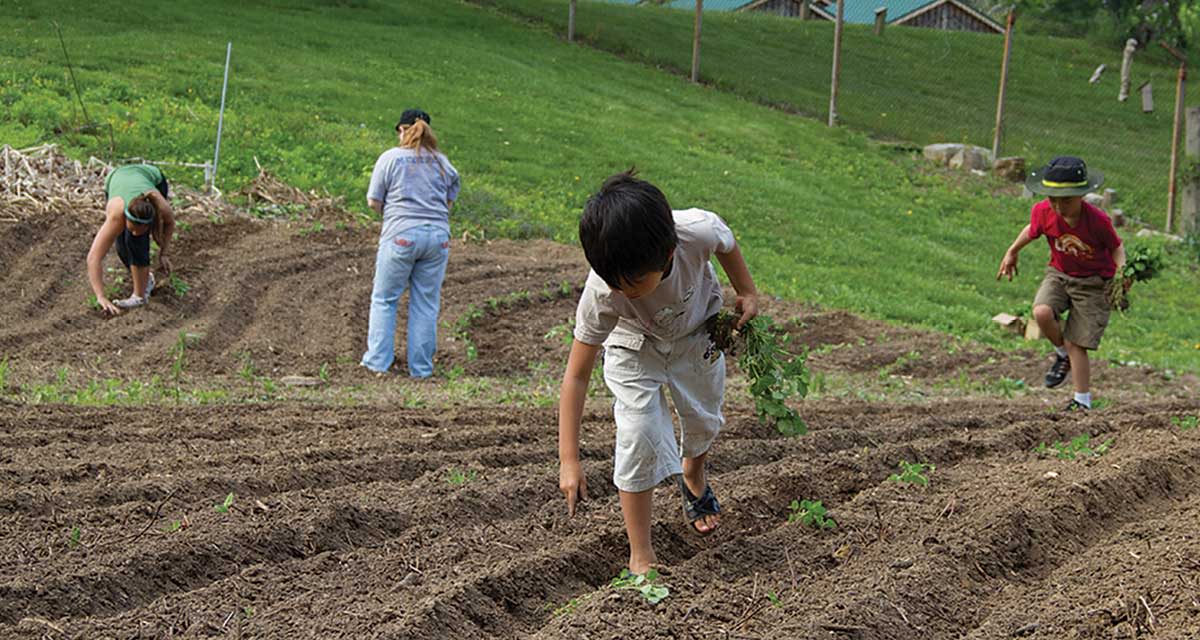 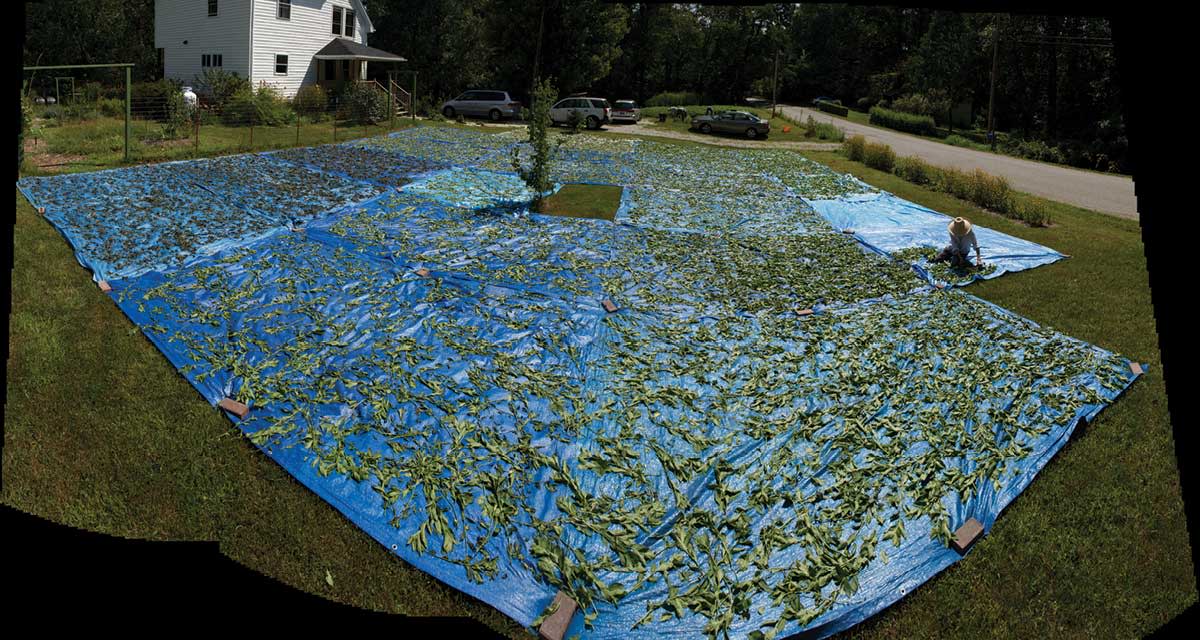 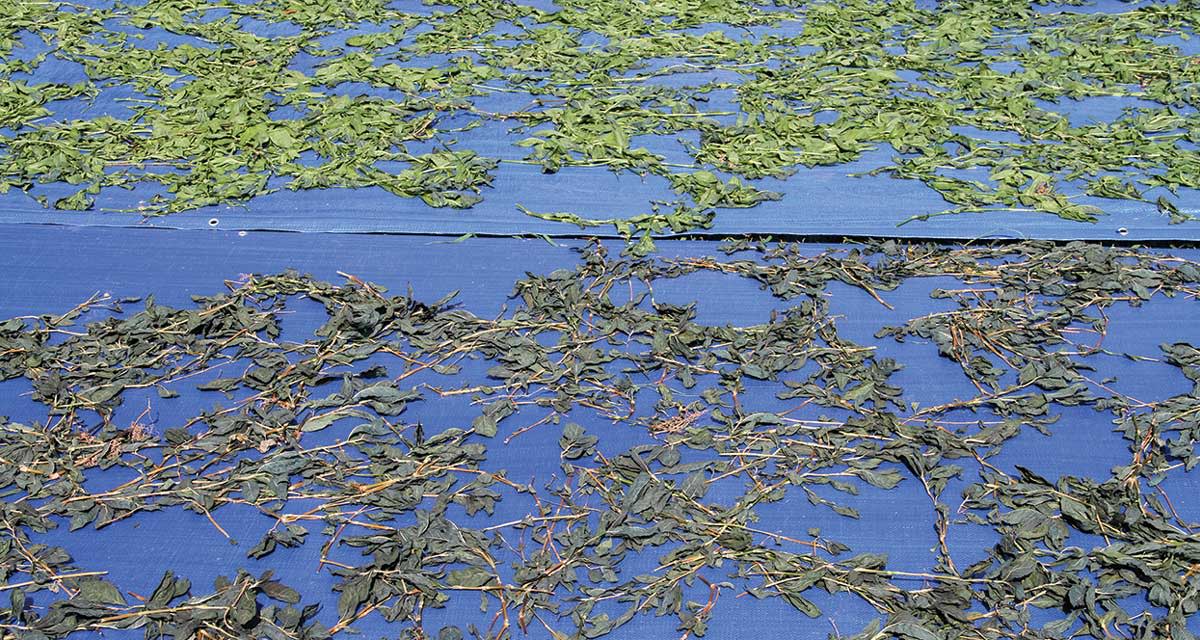 As freshly cut indigo plants (top) are dried over two days, the indigo in the leaves slowly oxidizes and turns from green to blue like the plants in the foreground.

A different method of making indigo dye was developed in the temperate regions of Europe and Japan. In these cooler climates, the dried leaves of indigo-bearing plants such as woad (Isatis tinctoria) in Europe and Japanese indigo (Polygonum tinctorium or Persicaria tinctoria) in Japan were composted to concentrate their dye content. Woad production in Europe collapsed in the 1800s when cheaper indigo precipitate from the European colonies flooded the market. In Japan, however, the policy of a “closed country” from the 1630s to 1850s greatly limited trade with the Western colonies. At the same time, historical sumptuary codes favored indigo for the vast majority of Japan’s citizens, creating a fertile environment for the development of Japanese indigo. It is from this time period that the Japanese indigo shibori, tsutsu-gaki, katazome, and kasuri textiles we appreciate today evolved, and it is because of these two circumstances that the knowledge of traditional indigo processing is still alive today. 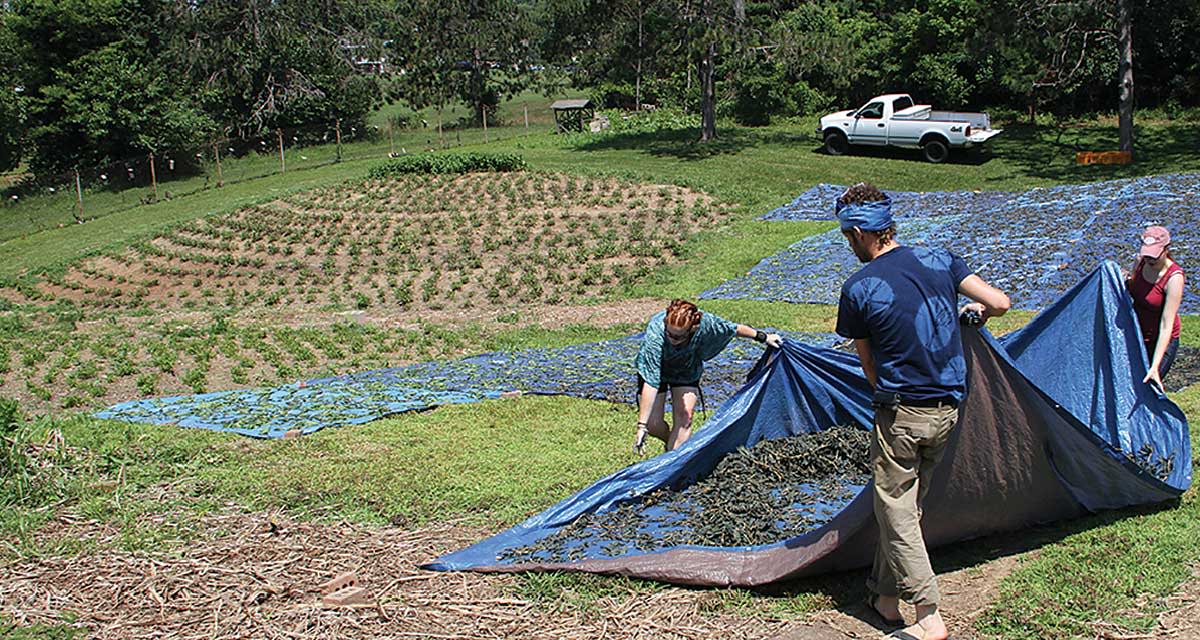 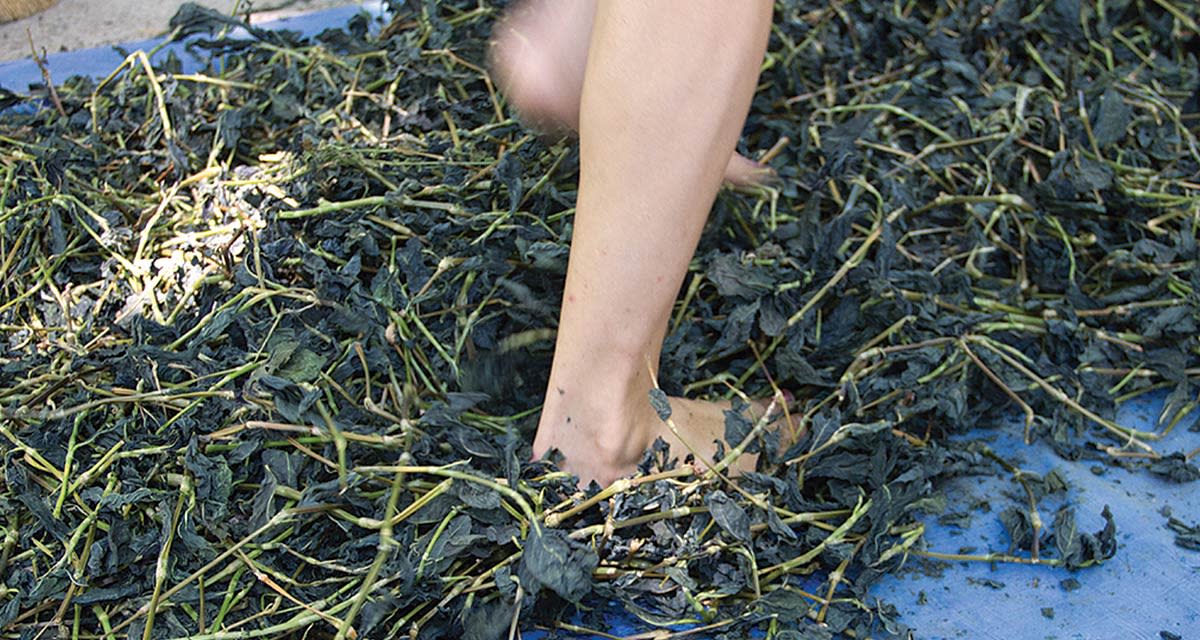 Stomping the dried plants to winnow the indigo-bearing leaves from stems. 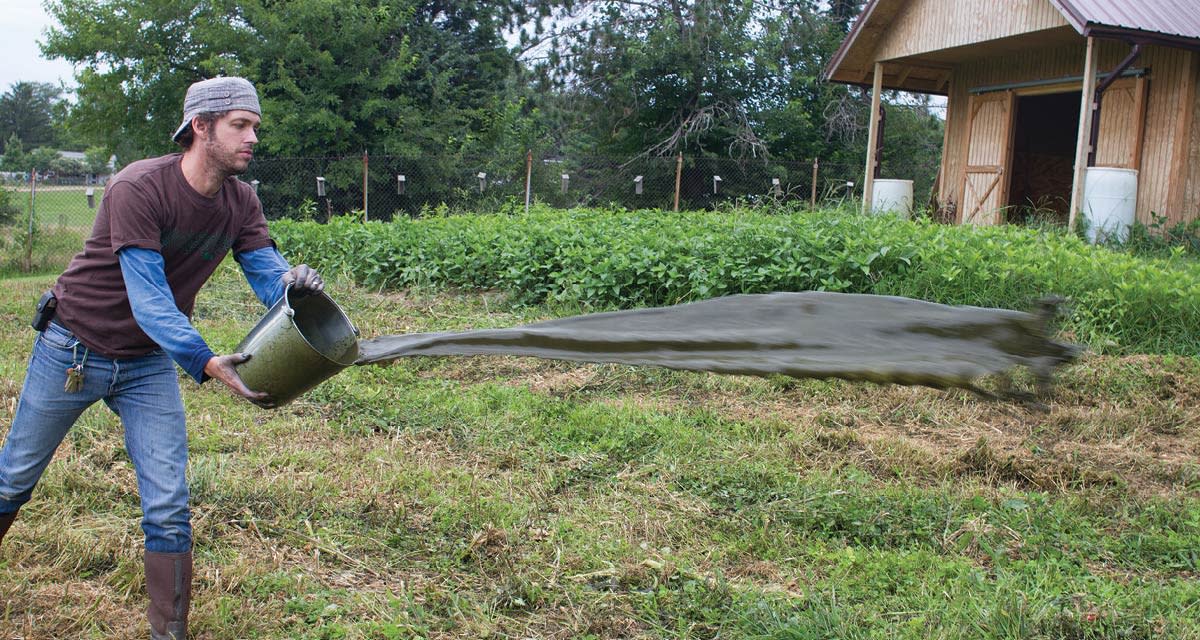 The exhausted vat is poured on the field to nourish the soil.

There are three basic elements common to all indigo vats: the indigo itself, an alkali (indigo is not soluble in water), and reduction/oxidization. (Indigo only adheres to fiber in its reduced form and remains attached when oxidized in the air.) I continue to work with the historical Japanese method mainly because it addresses all three parts of an indigo vat in a natural, sustainable way. I live in a temperate region (south-central Indiana), and the Japanese indigo I grow is perfectly suited for this climate. For an alkali, I use wood ash from the stove we use to heat our home as well as ash captured from the waste stream of a local restaurant with a wood-fired oven. The dyestuff made by composting the dried indigo leaves contains the bacteria necessary for making a natural fermentation vat. This fermentation is what reduces the indigo and makes dyeing possible. At the end of the vat’s life (four months to a year or more), the remaining liquid is spread on the fields as a fertilizer for future plantings. 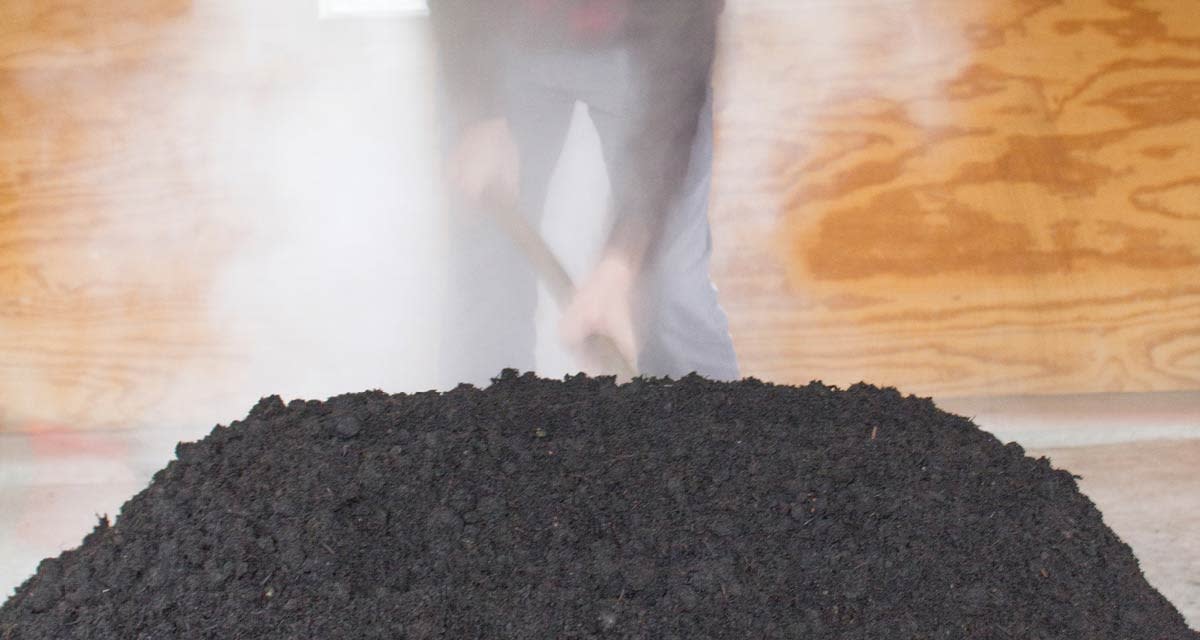 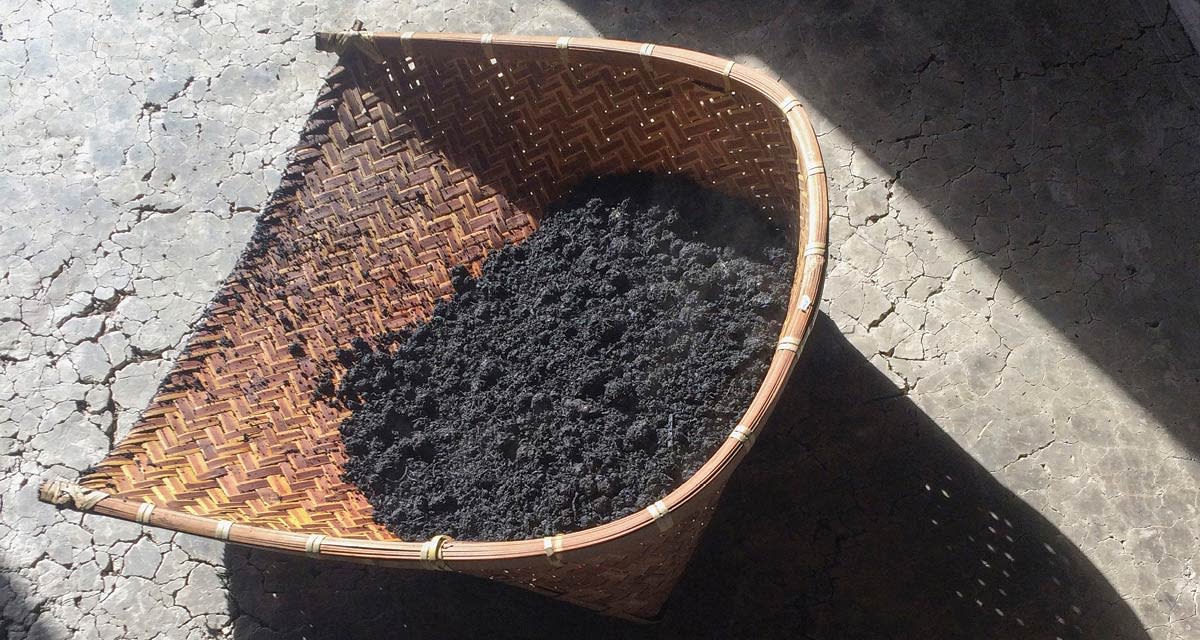 Beyond all of these things, however, I just really love the colors I am able to produce with this ancient method as well as the connections it brings across time and space to everyone who has ever worked with this process.

When I look at cloth I have dyed, be it for an installation or daily use, I am struck by the materiality of this color that has shaped my seasons and dictated my labor for twenty years, with planting and cultivating in the spring, harvesting in the summer, and composting in the fall and winter. To work with something that is bigger than I am still fills me with a sense of awe. Developed over hundreds of years by generations of people, this color wasn’t the work of one individual. Instead, knowledge about it evolved simultaneously around the world. It is something profoundly human and deeply meaningful. Working with indigo as a plant and dye forges connections to our immediate environment and communities as well as to other people and times through the action of our common labor. While the meaning of those connections may be different for each person, I believe that the sense of awe and wonder we experience when working with something that is bigger than ourselves just may be the art itself. 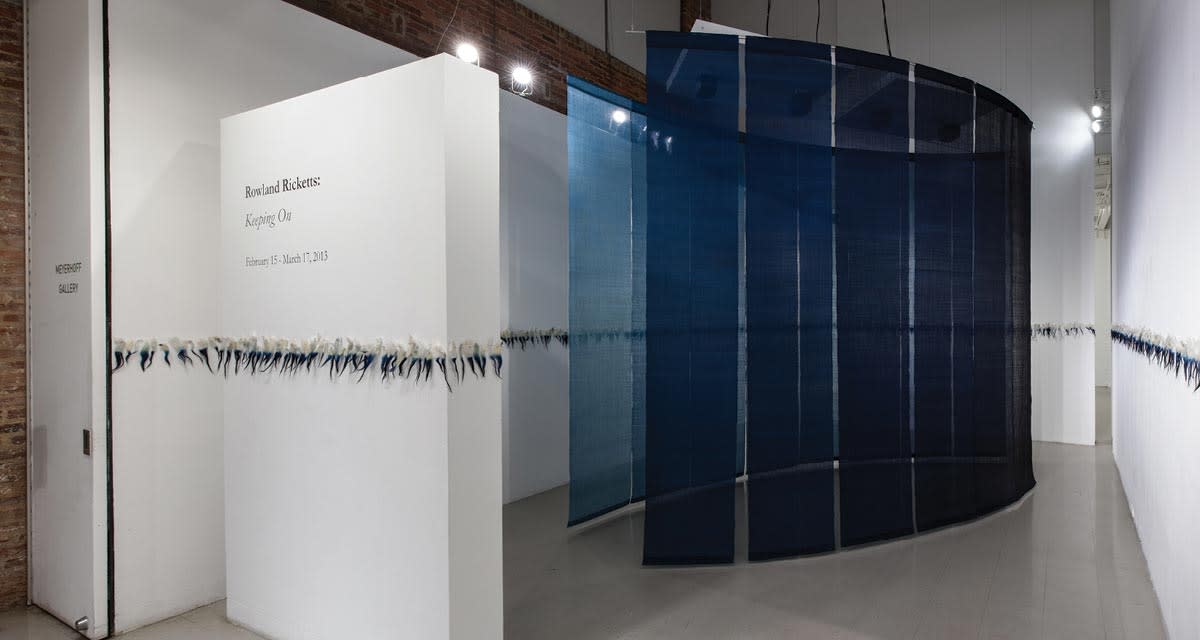 Rowland Ricketts’s 2013 exhibit “Keeping On” featured a variety of materials dyed in indigo. 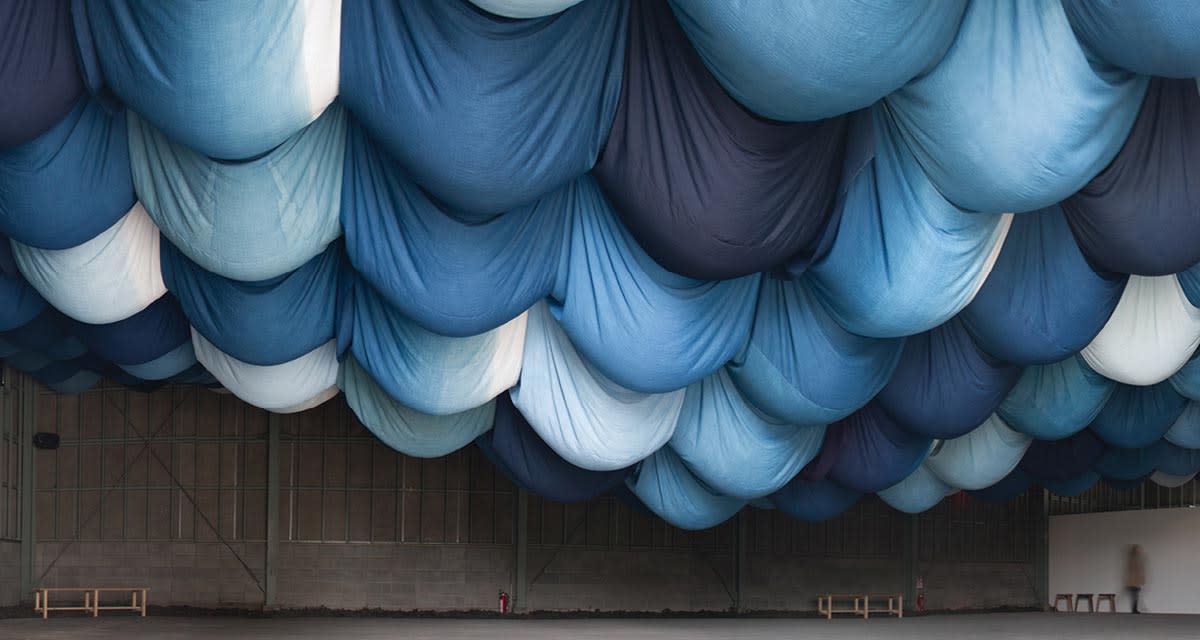 Rowland’s sukumo-dyed “I Am Ai, We Are Ai” hung at the 2012 National Cultural Festival in Tokushima, Japan.

Rowland Ricketts utilizes natural dyes and historical processes to create contemporary textiles that span art and design. Trained in indigo farming and dyeing in Japan, Rowland received his MFA from Cranbrook Academy of Art in 2005 and is currently an associate professor of studio art at Indiana University. His work has been exhibited at Cavin-Morris Gallery, Douglas Dawson Gallery, The Textile Museum (Washington, DC), and the Museum of Fine Arts, Boston. Rowland is a recipient of a 2012 United States Artists Fellowship and a 2014 Martha Stewart American Made Award.

This article originally was published in the Summer 2016 issue of Spin Off.