Hand Carders Then and Now

If you gave ten handspinners each a brand-new set of handcards, how many different ways would you see them used?

Handcards are new technology where spinning is concerned, but handcards from 150 years ago are still great tools. Photo by Abbi Byrd

Some hand carders might get out a pen and mark one as left and the other as right, then keep each card in its own hand as if it had been glued there. You might see some elaborate acrobatics as fiber was transferred from one card to another. You just might find ten different ways of using those cards.

How We Got Here

Why would those ten hand carders card the way they do? Some will have been taught a strict set of always-do’s and don’t-evers; others will simply have developed ways that they like to card. In earlier times, spinners learned to card from other spinners; in contemporary times, many spinners learn from books, magazines, videos, YouTube, or trial and error. Any way the information comes, there are more approaches to carding wool than you can imagine.

People have probably been carding wool in some fashion for as long as they’ve been spinning wool in some fashion. Maybe “carding” meant simply teasing it out with their fingers; maybe it meant flogging it with flexible sticks (“willowing”) to fluff it up and knock out debris. The aim was always the same, though: to create a loose mass of fiber that could be drafted with reasonable ease and consistency.
The origin of handcards as we know them, the European and American tool of choice for centuries, is murky.* Most handcards in museum collections seem to date back no further than the early nineteenth century. This is a tool that wears out with use, so historical artifacts don’t give us a very long history of handcarding.

Alden Amos said the following about hand carders: “In regards to card clothing [the material in which the sharp wire teeth are fastened] . . . drawn wire from iron or steel seems to date from about the 13th century from the area around Nuremburg. That is to say, it became more or less commercially available and not the product of the jeweler. Prior to handcards, you picked, teased, plucked, scraped, combed and otherwise disentangled your wool fiber. Blacksmiths throughout time have been able to make comb teeth, but hard wire of uniform size in large quantities seems to be pretty much a German invention. The carding machine as we know it seems to date from the late 17th to the early 18th century and may be a British invention—two gentlemen named ‘Lewis’ and ‘Paul.’ . . . I might be hazy about the dates.”

The carding of wool was mechanized early in the Industrial Revolution, but the aim was to transform clumpy wool into a material that could be fed into mechanical woolen spinning machines that lacked the subtle hand skills of an experienced handspinner. In his 1899 classic volume on industrial wool spinning, Woollen and Worsted Cloth Manufacture, Roberts Beaumont notes, “[The aim of carding] is to produce one promiscuous mixture of uniform density throughout.” In Great Industries of Great Britain, William Gibson states that after carding, “all the filaments have become inextricably confused, crossed and re-crossed in every direction, but at the same time presenting the appearance of a continuous ribbon of equal width, density, and weight.”

This uniformly mixed-up preparation is not what the typical hand carder today will accomplish. Handcards tend to align the fibers, and although handcarded fibers are less straight and organized than combed top, they are far from the deliberately jumbled preparation that characterizes industrial woolen spinning. 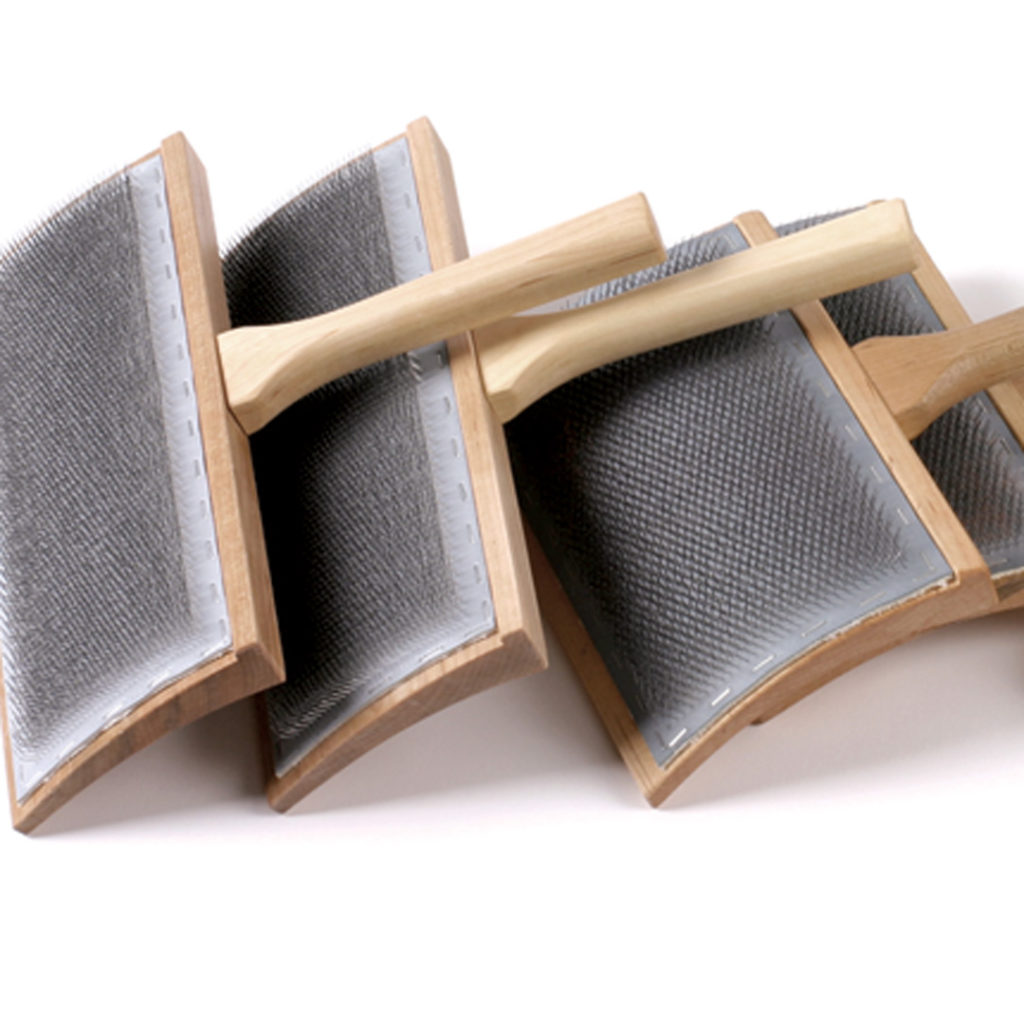 For finer fibers, choose handcards with more teeth per inch, such as cotton cards. For medium wool, use wool cards, which have 72–112 teeth per inch. Photo by Ann Swanson

What’s a Spinner to Do?

The goals of handcarding are generally to break up clumps, open up locks, maybe get the fibers into some state of alignment, which you may then deliberately mess up when you roll the carded wool end over end in a rolag or puni to remove it from the cards.

Most hand carders have developed their own individual tricks, variations on some basic steps. There are also common protocols for taking the wool off the carder: roll it sideways, roll it endways, or just take off the little batts and stack them with other little batts. Which ones are best? It seems to come down to personal preference, trial and error—just messing around with cards and wool until you get a fiber preparation you want in the way that’s easiest for you.