A Variety of Flick Carders

I taught myself to spin in 1971. I didn't have a book. I'm not sure I'd ever even watched anybody spin on a wheel. I did have a 15-minute tutorial on using a drop spindle (emphasis on "drop"). My wheel was an old upright Swiss table wheel loaned to me by a friend. It still bore traces of the aqua paint she had stripped off it, and the red paint below that.  Somehow I managed to make yarn eventually. 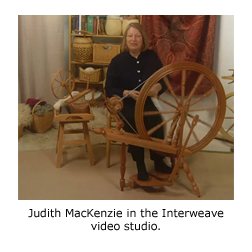 I made quite a lot of yarn on that old wheel, actually. But I can't say I ever really understood it. I would twiddle the ancient leather thong that served as a sort of crude scotch tension. Or I would screw the tensioning mechanism up and down until the yarn would draw on. It was spinning by muddling around. And it was some years before I learned a few basics of how spinning wheels actually worked—how the drive wheel made the flyer go 'round, how the flyer and bobbin went around at different rates, and so forth.

Well, I got a crash course and a huge gift last month when I had the privilege of sitting in our little video studio here at Interweave and watching Judith MacKenzie hold forth on wheel mechanics for a whole day. It was fascinating! I wanted to rush right home and check out how to spin six different weights of yarn by doing nothing more than moving the drive band from one pulley to another, and then spinning that same fiber spider-thin by simply crossing the yarn from one hook to another. It was pure magic. I wanted to pull my scotch tensioned wheel out of the corner and give it the same kind of attention that I give my double-drive wheel, now that I understand its versatility and other considerable merits better.  I wanted to splice me a good drive band.

I don't think of myself as being particularly mechanical, but this session was intuitive mechanics. It wasn't about counting and measuring, it was about understanding my tool. It helped me understand my spinning wheels the way I understand the gears on my bike—an important thing here in Colorado.

The other thing that made this an especially rewarding day were the stories. If you know Judith MacKenzie, or know of her, you probably know that she is a superb spinner of spinning tales, with world travels and years of experience to share.  I wish you could have been there, too. But at least you can watch her videos.