Russian goat down has a unique heritage in humanity’s husbandry.

Reading The Fleece and Fiber Sourcebook (for about the tenth time), I realized that the “down” goats I encountered when I began spinning in Russia differ from the goats common in English-speaking parts of the world. Undertaking some fiber research, I learned that the rules for goat classification are different in Russia for the simple reason that different types of goats are bred there. In addition to the general classes of Angora, Cashmere, and Cashgora, Russia breeds goats that have traits all their own.

There are many goats in today’s Commonwealth of Independent States (CIS) territory, numbering more than 12 million head. All Russian fiber goats are called “down goats,” although there are clear differences among them. These types of wool-producing goats are widespread in today’s Russia and CIS. 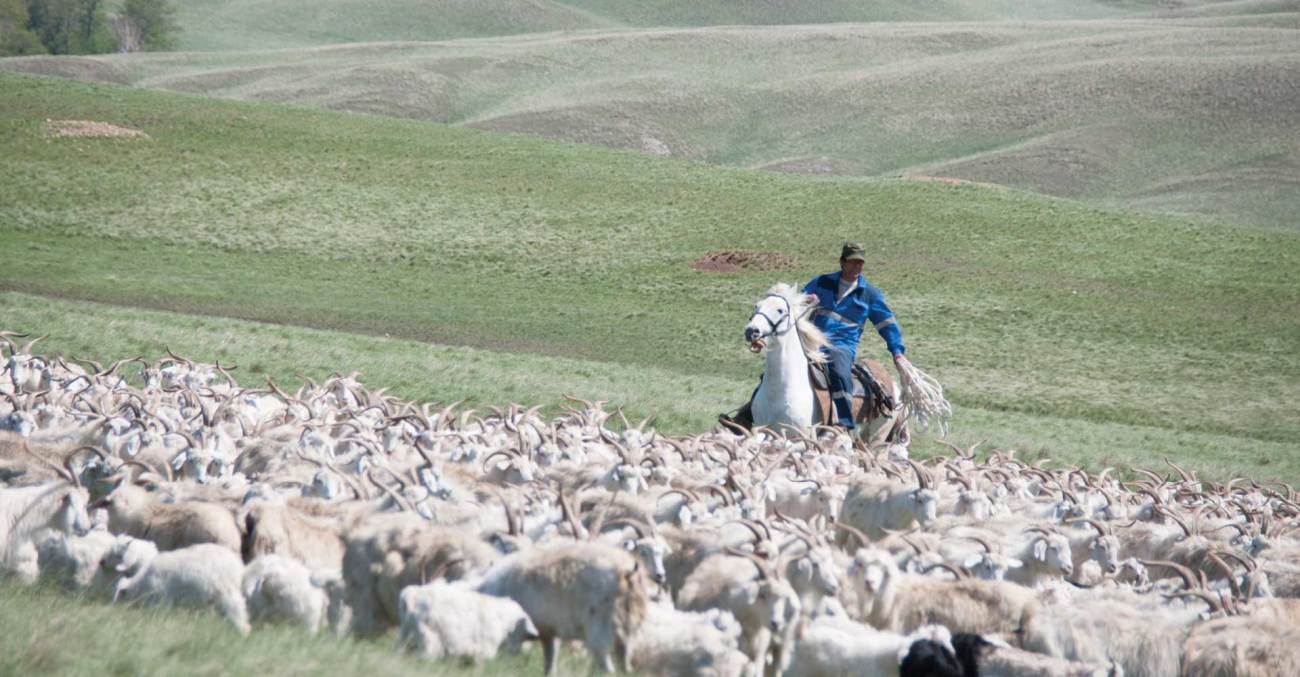 Angora-type goats include the Angora goat, the Soviet woolly goat, and the Marash goat.

Angora goats are well known worldwide for their mostly white, curly, distinct locks measuring between 20 and 39 microns. Soviet woolly goats developed from a long-term breeding program from 1936 to 1962 in different parts of the Soviet Union. Breeders crossed Angora goats from the United States with local goats that produced coarse wool because pure Angoras were poorly suited to the humidity and cold of the local climate. By 1962, when flocks around the country numbered more than 400,000, the crosses were recognized as a single breed. The woolly goats’ fiber is very similar to mohair, although they have slightly more guard hair than Angora goats (1 to 1.5 percent vs 1 percent). Like Angora goats, these goats are sheared once or twice a year.

This type of goat is well known throughout the world, but the Cashgora and Cashmere types are special. The properties of those goats and their fiber properties make them unique to Russia. 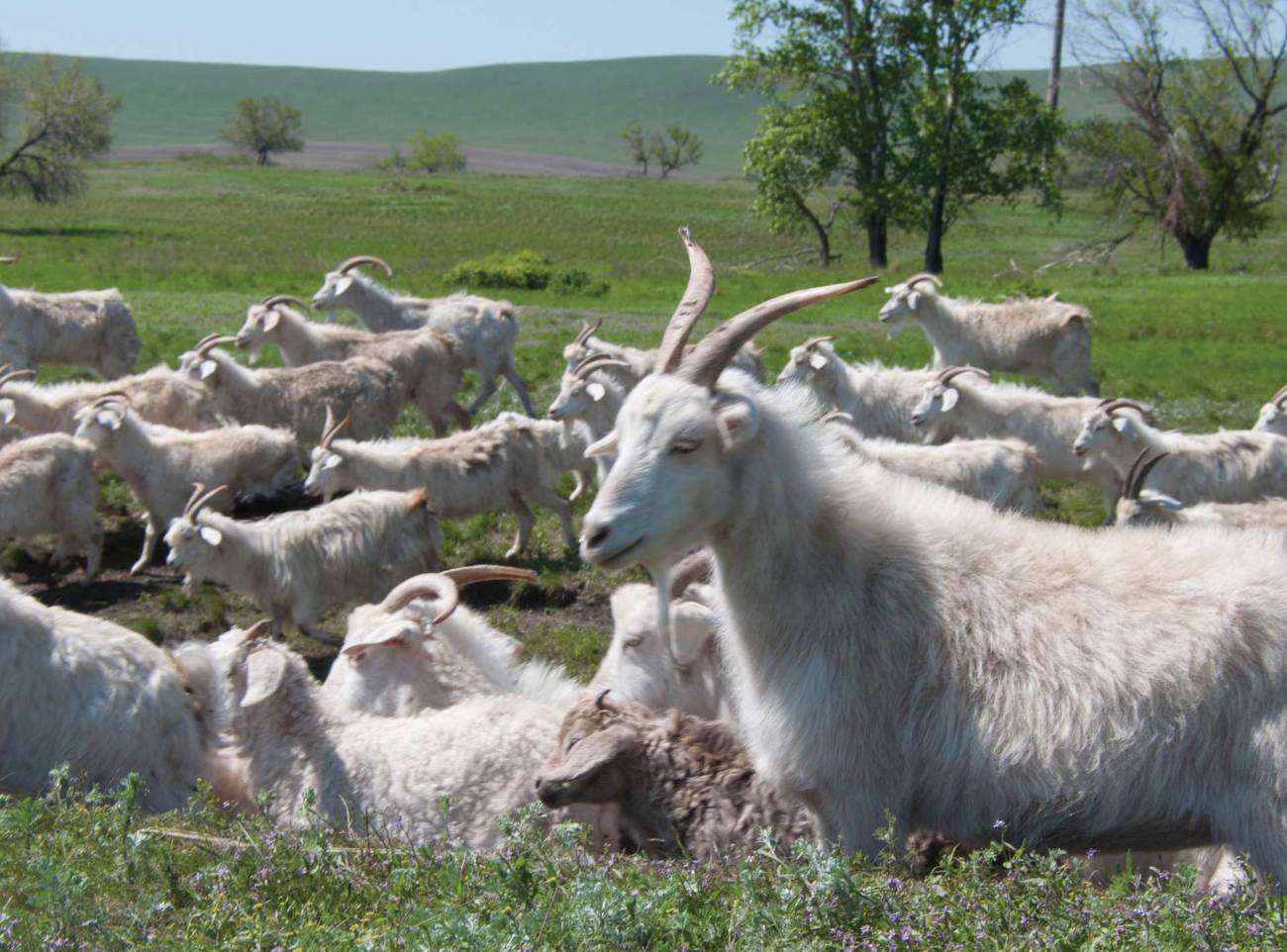 The fleece of Cashgora-type goats shares some qualities with both mohair and cashmere fibers. These are the most widespread fiber goats in the CIS and are very well known among handspinners.

The Pridonskaya breed is a friendly, inquisitive goat that produces very nice gray or brown fleece with rare white animals present in the breed. Its origins are undefined, but it is commonly recognized to have been established over the course of several centuries in the south of Russia through commonsense breeding. When crossed with other breeds, Pridonskaya characteristics strongly dominate.

This breed was discovered by the Russian Scientific Wool Committee in 1933 and named after the river Don, near where it was found in large numbers. Further crossing with Angora goats imported from the United States created the modern type of Pridonskaya breed. Their high milk, meat, and kid productivity make them the most popular domestic goats in Russia, especially in the regions of central Russia and the CIS. 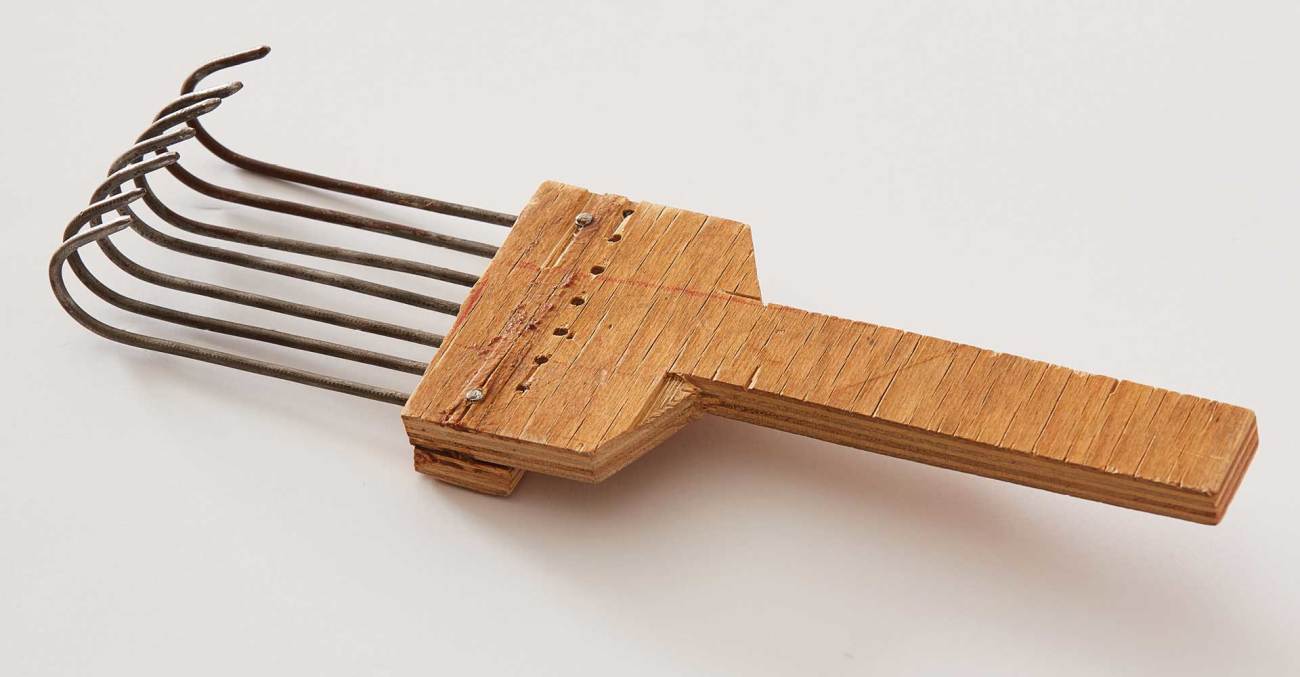 Curved combs such as this one collect the down from the goats in the spring. Photo by George Boe

The Pridonskaya breed produces fiber called “down” in Russian that can grow up to 13 centimeters long, with guard hair shorter than the down fiber (up to 5.5 centimeters long). The fleece comprises 80 percent down, with gray down as fine as 20 to 22 microns and white at about 22 to 23 microns. This springy, strong, long, and uniform fiber is commonly used to knit warm cloth, necessary for locals. These goats are very productive compared to other down goats, yielding 600 to 800 grams (1.3 to 1.8 pounds) of down per gray animal and as much as 800 to 1,000 grams per white goat (with a maximum of 1,500 grams).

Cashgora-type goats are handcombed during the period of natural shedding around the end of February. Professional handcombers can only comb between six and eight goats per day. 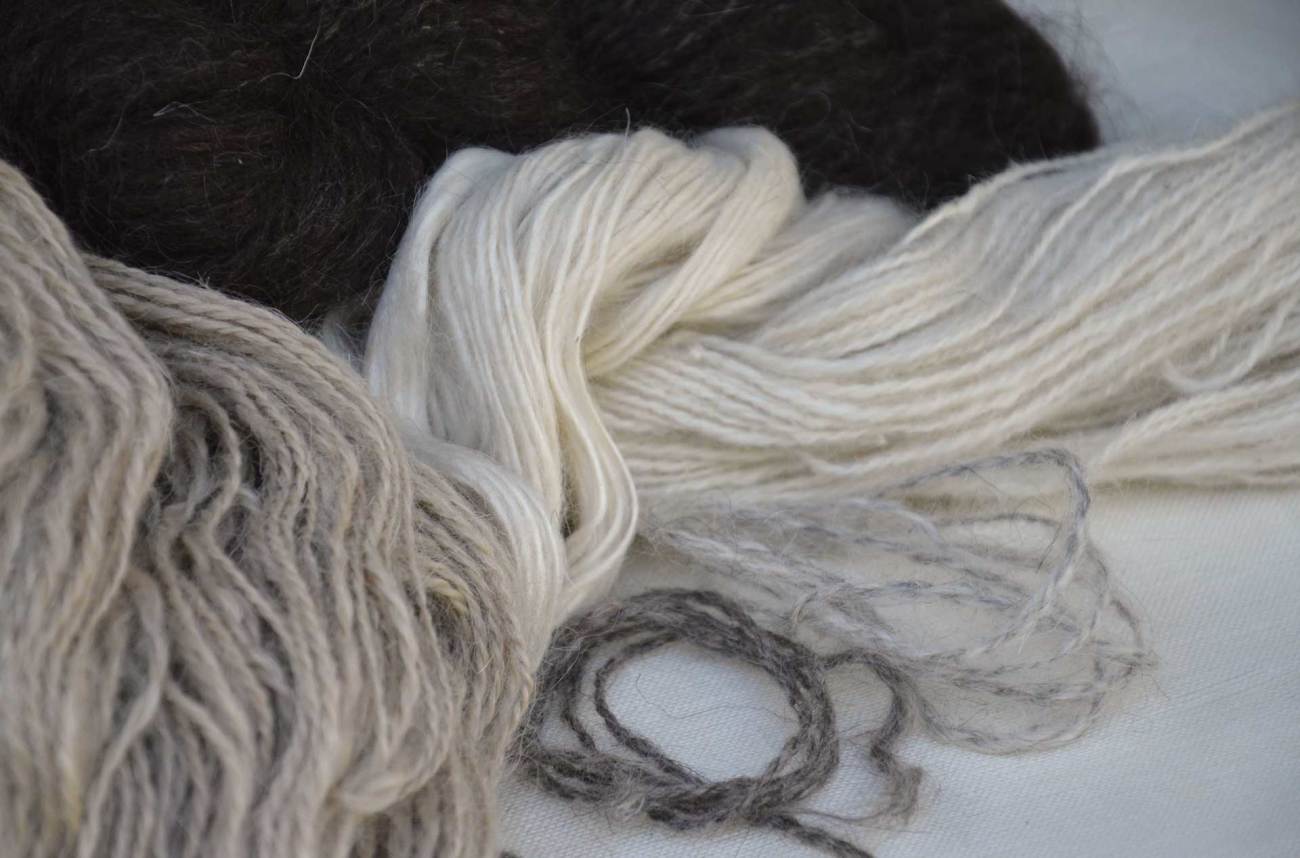 Other Cashgora-type breeds were created from the Pridonskaya by crossing them with local goats in other regions. The Gornoaltayskaya breed produces dark gray down and white measuring 17 to 19 microns and 8 to 9 centimeters long. Due to the high altitude and cold climate, the Gornoaltayskaya breed produces especially fine fiber. From the 1970s through the 1990s, Orenburg spinners and knitters used a great deal of this fiber. It can be difficult to find today because much of it is sold to Chinese manufacturers over the Altai Mountains. The Dagestanskaya Pukhovaya yields fine white down at 20 microns and 10 centimeters long. These fibers are most desirable among spinners and knitters.

Orenburg goats are among the world’s best-known breeds, recognized for their cashmere-like undercoat. The breed arose in the Orenburg region in the Southern Urals, near Kazakhstan and Kyrgyzstan. The goats achieved their fame because of the well-known intricate Orenburg lace shawls, which won awards at European world exhibitions beginning in the nineteenth century.

Orenburg goats originated from local nomads’ goats, which were bred by shepherds for their fine and warm fleece as well as for their milk and meat. The breed’s origins may stretch back to cashmere-producing goats in the Himalayas.

By the seventeenth century, Cossacks arrived in the Southern Ural Mountains and began to buy goods from local nomads. Discovering the fine down clothing of the nomads, the Cossacks began breeding goats that they bought from local nomad shepherds. The successive generations were carefully selected for their fine down production as well as resilience in harsh winters with cold, strong winds. The efforts of these shepherds were rewarded with a strong, well-adapted breed with a fine gray down. Fiber length was less important than fineness, with goats producing an average of 200 grams per year measuring 14 to 16 microns and 5 to 5.5 centimeters long.

In 1936, the Russian State Goat Breeding Institution decided to improve the Orenburg goat’s characteristics by crossing it with the Pridonskaya breed, which caused the deterioration of desirable qualities. A thirty-year effort followed to restore the Orenburg breed, and the breed is no longer crossed with others.

Orenburg goats are strong and well adapted to the local climate, able to stay outside most of the year. Ninety percent of the goats are black, with the remaining goats red, gray, and rarely white. Their fleece consists of black guard hair, which measures 85 microns and 8 to 10 centimeters long, and an undercoat, which is 5 to 6 centimeters long and 14 to 16 microns. The fleeces have very little grease, and the longer guard hairs protect the down from light, humidity, and dirt. The down is very soft and elastic, with even length and fineness over the goat’s body.

Unfortunately, Orenburg goats are not top producers in all categories. They don’t produce as much fiber as Pridonskaya goats, and their milk is sparse. Orenburg goat fiber has always been reserved for very special projects. 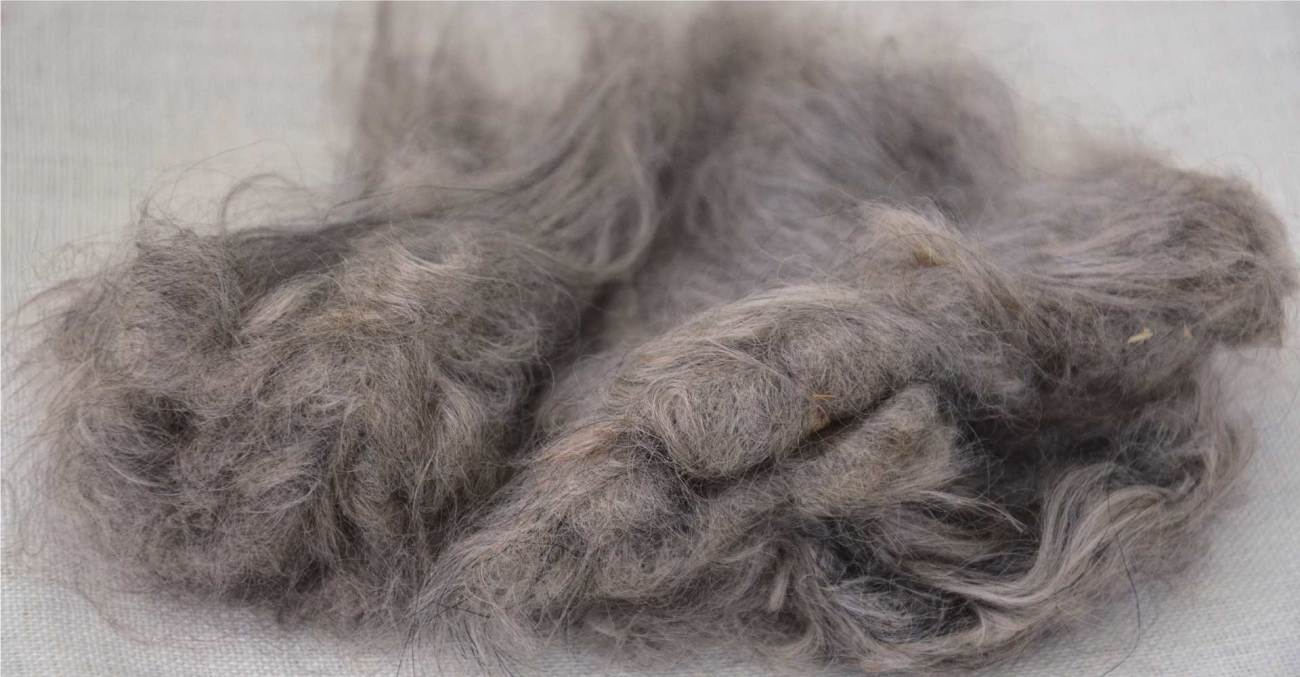 The combs collect down fibers behind their curved teeth. Photo by Katia Gorges

The Cashmere- and Cashgora-type goats are traditionally combed using special combs with rounded teeth. Goat combing is still done by hand without the use of machines.

When processing goat down for handspinning, a tidy and accurate handspinner removes all the guard hair by hand before carding or combing. Depending on its condition, the down may be washed before further processing.

Goat down is usually used undyed, showing off its variety of natural colors. Some striking Orenburg shawls incorporate two or more colors.

Fiber spun from goat down makes fabric that is extremely drapey and warm (even more so than mohair) and that has a wonderful halo. Yarns are generally spun as singles and then plied with silk or cotton. The best spinners and knitters never brush their knitted items, saying that the down will bloom when worn.

The finest down from Orenburg goats is used to produce very fine shawls called gossamer webs. These fibers can be very finely spun and they are warm, lustrous, and as soft as the softest of cats. Since the nineteenth century and the availability of silk thread, these singles have been plied with fine silk, making finished items a little less expensive.

The less fine, gray down is used to knit warm wraps that protect the head and neck of the wearer from cold winters. Spun less finely, these fibers are plied with cotton thread dyed to match the fiber, making it hard to distinguish the strand and almost invisible to the uninitiated.

Other types of down or fibers left from the first carding or combing are used to spin thicker yarns for knitting hats, mittens, socks, and other clothes.

Cashgora-type down is widely used by industry, either for producing handknitting yarn or in high-quality fabric production. 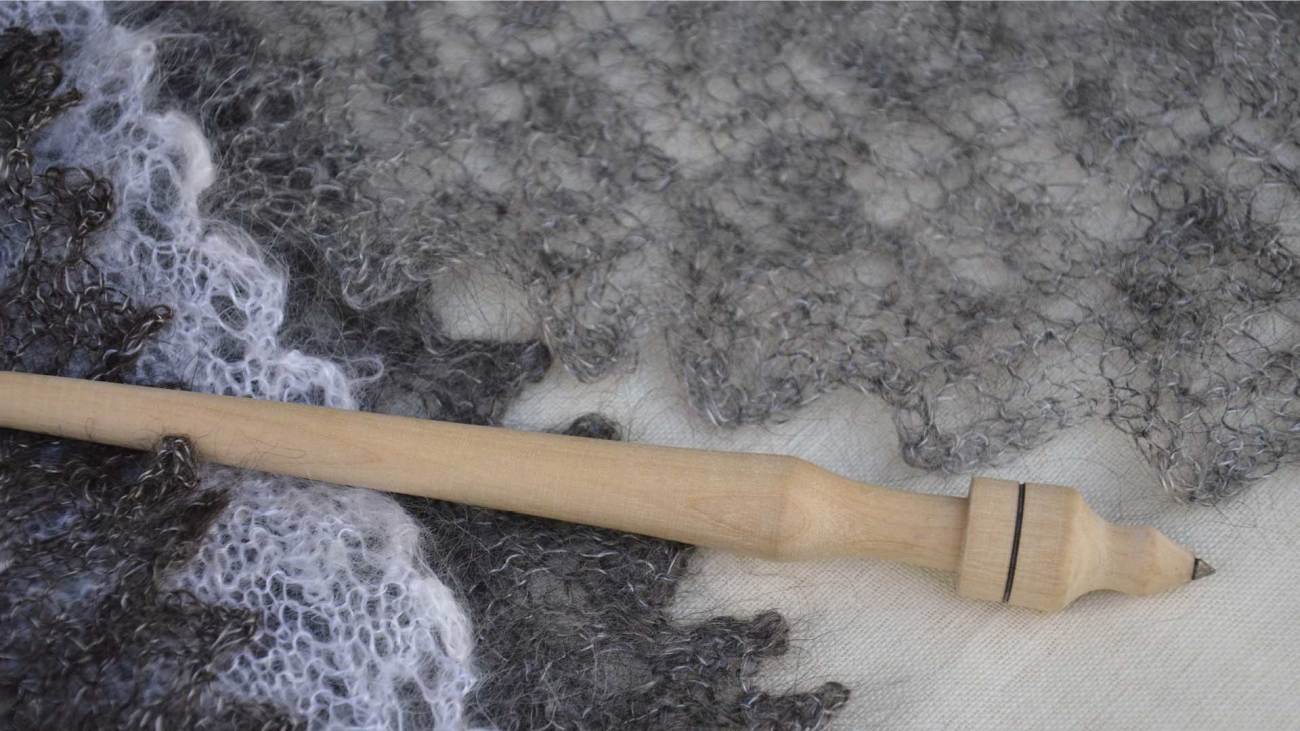 Handspun shawls knitted from one ply of natural-colored goat down and one ply of fine silk singles. Photo by Katia Gorges

During the Soviet era until 1991, a strong system protected breeders, spinners, and knitters in the Orenburg region, giving them knowledge and support. Fiber was exclusively local, taken from carefully selected goats and handspun according to the rules. Knitters produced items at home, and participants along the whole supply chain received salaries for their work. Various quality standards governed the whole process including down collection, spinning, and knitting. The value of every shawl was estimated according to its yarn and knitting. The most intricate pieces went to international exhibitions, bringing fame and monetary rewards to their creators.

In the 1990s, the system collapsed, bringing chaos and destabilizing the monitoring of quality and expertise. Breeding and selection activities almost came to a halt. Some knitters continued to knit, and the shawls were still sold at local markets but without proof of the down’s origin.

You can find many white or gray shawls sold online as “Orenburg down shawls.” The sellers benefit from the worldwide fame of these beautiful artifacts; but where they come from, what they are made of, and where they are produced remains a mystery.

Handspinners may find Pridonskaya down available from private online sellers in a variety of gray and black colors. Most sellers are not well-established shops but rather individuals picking up some down in the countryside and trying to earn some money. Sheared fiber, which includes guard hair and is heavier and more expensive, is easy to find as well. Shearing makes it difficult to separate the guard hair from the down for further processing. If you don’t ask for advice from spinners, you might be disappointed when you receive sheared fleece rather than combed down.

It is currently almost impossible to find the finest Orenburg down; the breed seems almost nonexistent. Most “down” sold as Orenburg down is less fine and far longer than true Orenburg, very different from what it should be.

Russian goat down has a unique heritage in humanity’s husbandry. It takes a rare mix of wisdom and special climate to yield these wonderful animals producing one of the most gorgeous and softest fibers in the world.

The editors thank Galina Khmeleva, author of Spinning Gossamer Threads: The Yarns of Orenburg, and Linda Cortright, editor of Wild Fibers magazine, for their contributions to the article.

Katia Gorges is a Russian spinning and knitting teacher who lives most of the time in the French countryside, where she spins, weaves, embroiders, and processes fleeces. In 2017, she self-published her first book in Russian entitled Spinning for All. She is endeavoring to create an association of woolgrowers in Russia at www.arc-en-fibre.com.

This article was initially published in Spin Off _Winter 2018.