Spring brings sheep-shearing season to many parts of the United States, and skilled shearers are in high demand.

Spring brings sheep-shearing season to many parts of the United States, and skilled shearers are in high demand. In the Fall 2017 issue of Spin Off, we introduced you to a pair of Colorado teens who recognized an opportunity to both fill an industry need and make a little money while still in school.

Meet Ashby and James Morkunas of Blow by Blow. These siblings turned a weekend class into an unusual moneymaking venture. A couple of years ago, the teens heard about a local sheep-shearing course sponsored by the Morgan County Extension office of Colorado State University. Being around sheep comes naturally to the shearing duo—their family raises Jacob sheep. Ashby and James explain, “Neither of us had a job at the time, and our parents encouraged us to take the class for the opportunity to have a unique job.” 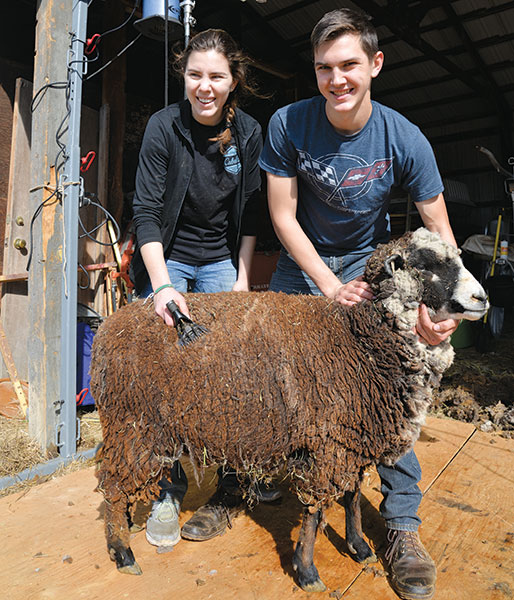 Through word of mouth, brother and sister James and Ashby Morkunas have built a thriving sheep-shearing business. Photos by Kathryn Morkunas

After becoming certified by the American Sheep Industry, Ashby and James purchased their own shearing equipment and began spreading the word about their new operation. Within a week, they secured their first customer. By the spring of 2017, they began their third shearing season; they have shorn more than 1,500 sheep since 2015. The pair plans to continue shearing sheep as a way to pay for their college educations and travel to Australia and New Zealand.

Ashby and James enjoy the physical demands of their unusual occupation as well as working outdoors. They say, “Once you shear a few sheep, you have the pattern in your head. The hard part is gaining confidence and working out the details to improve proper control and understanding of the sheep, while making every blow count.”

This article originally appeared in the Fall 2017 issue of Spin Off, our 40th-anniversary issue. Sheep-shearing season happens in the fall, too. To learn more, read Kate Larson’s “Roving Reporter: Fresh Fall Fleeces? Sheep Shearing in Autumn.” For more information about Blow by Blow’s shearing services, email Ashby and James Morkunas at [email protected].