Handspinner Jeannine Glaves, never one to shy away from trying a new fiber, recounts her experience with three uncommon fibers.

In the Winter 2014 issue of Spin Off, adventurous handspinner Jeannine Glaves shared her experiments in spinning three unusual fibers. —Editor

I’m always looking for what’s new to spin and came across some chinchilla fiber. Chinchillas are in the rodent Chinchillidae family and look like fat, very fluffy, big-eared mice; they are the size of a squirrel and have a fluffy squirrel-type tail. Historically, they lived in the high altitudes of the Andes and today are only found wild in Peru. Chinchillas can make great pets, but use care around children as they are fragile and can bite. They lack the unpleasant odor that most rodents have and are curious and happy by nature, with beautiful soft, gray, lush hair that can be released if needed as a defense mechanism. High humidity and hot weather is hard on them. They have short attention spans, like burrows, and can jump up to 6 feet in distance. Some are high-strung and therefore hard to handle.

When I purchased chinchilla fiber, the tag assured me that the fiber came from animals that were unharmed and alive. I did learn later that the fiber had actually come from dead animals—the fiber harvested from their pelts. That seller is no longer selling the fiber. I would prefer to know the truth about a new fiber so that I can make an informed decision when purchasing fiber for spinning. If you want to be sure that your chinchilla fiber comes from a happy chinchilla, then beyond raising them yourself, you should talk to the seller and ask how the animals are cared for and how the fiber is harvested.

That said, chinchilla is a wonderful, soft, 13-micron fiber that has a 1½ -inch staple with up to sixty hairs sprouting from one follicle. It needs to be handled gently so that the fiber isn’t damaged and to prevent it from flying around as you work with it. I started spinning with 100% chinchilla fiber to get the feel of it. Because it has a short staple like cotton, I started by making punis on my cotton handcards to organize the fiber. Using my forward hand to control the twist, I spun with a short backward draw and a 9:1 ratio on my wheel to achieve a 35-degree angle of twist in my plied yarn. Next I added extra twist by using less bobbin take-up and made a balanced two-ply yarn with a 45-degree angle of twist in the finished yarn. Even with a higher amount of twist, it was very soft. I was trying to control the flyaway tendency in the fiber and make it easier to work with. 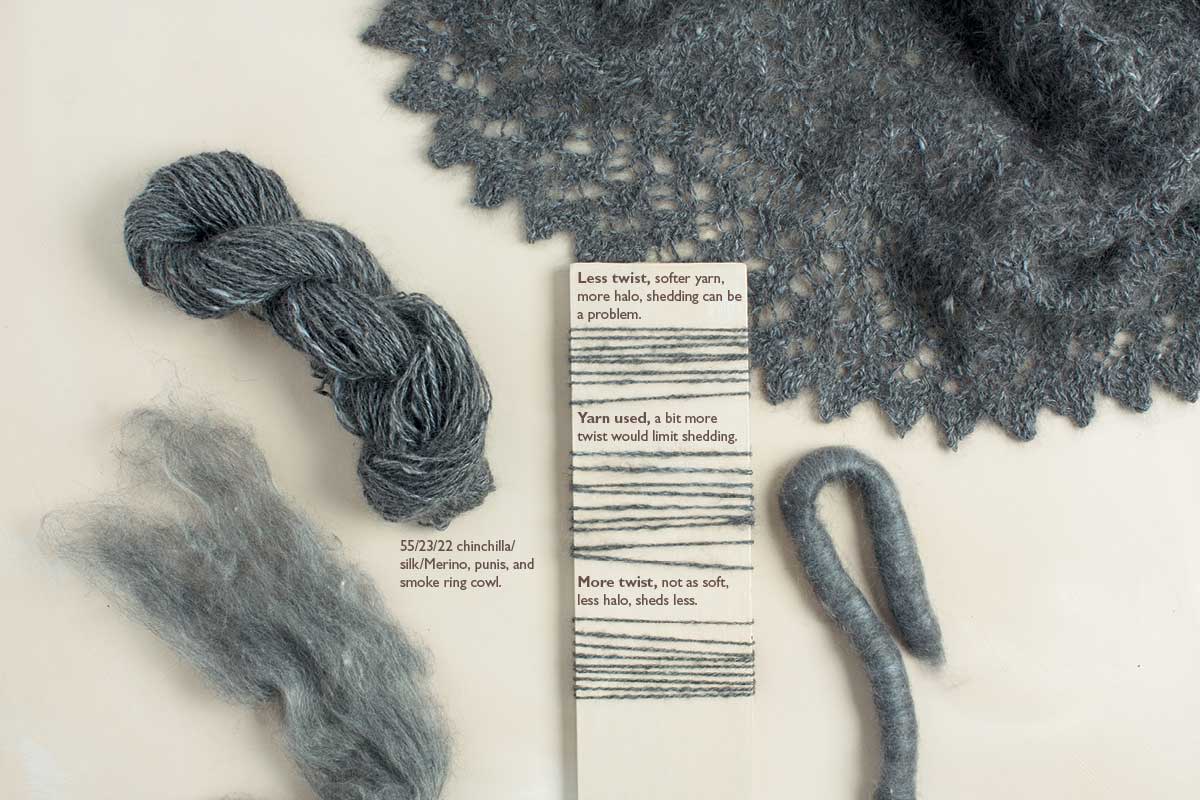 I decided to add silk to the blend and made a batt with a 55/45 silk/chinchilla blend. The yarn had a subtle halo, was soft, and had a pleasing sheen. I tried 45/28/26 chinchilla/silk/Merino next. The wool added loft to this yarn, making the hand softer, and yet it maintained a nice chinchilla halo and silk luster. I tweaked the numbers a bit for my last sample of 55/23/22 chinchilla/silk/Merino and made punis on my cotton cards to spin. I thought this blend would make a nice weaving yarn, so I added extra twist. This fuzzy-type yarn needs extra twist to help minimize any sticking when changing sheds. This was my favorite sample yarn for weaving.

I then made more batts with the same blend and a 35-degree angle of twist using the 9:1 ratio, spinning a very soft yarn for knitting. Rosemary Carlson knitted the smoke ring cowl on page 37 using a lace mesh pattern for the body and Mrs. Philpot’s Spider Edging and Easy Eyelets on the edge. She reported that this softer yarn with more chinchilla halo caused some fluff to fly around during knitting. The lace pattern doesn’t show as well with this yarn as it would with tighter-twist yarn, but this soft-spun yarn sure is warm. The best thing about making our own yarn is that we can design the best yarn for the job. 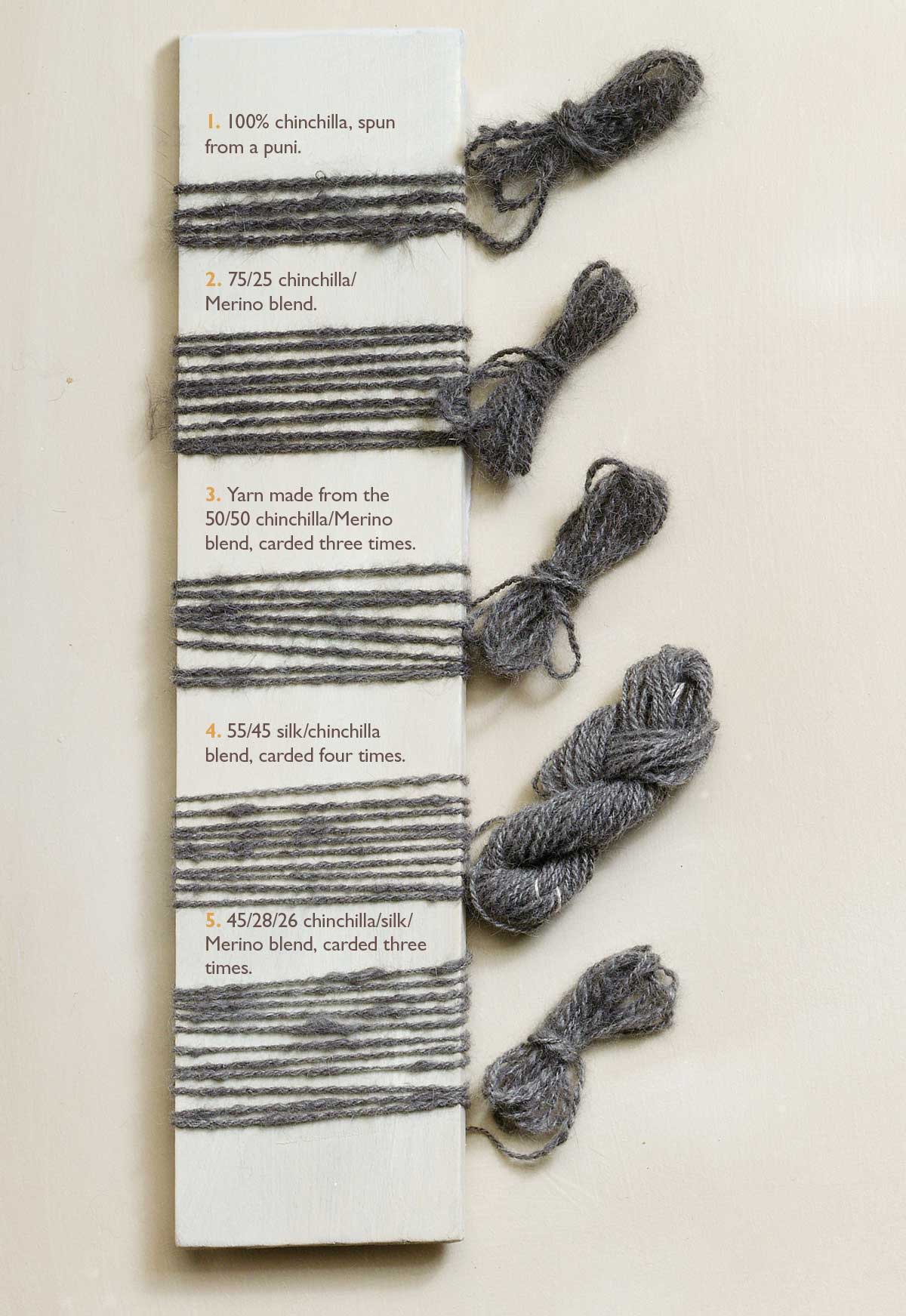 Early in my spinning life, I was teaching at an atelier (a workshop focusing on the fine or decorative arts). For fun, we offered a “stump the spinner” opening to draw attention to the various classes being taught. I would spin anything brought to the opening provided we could get it through the orifice of the wheel. (If I were to do this today, I would not have the orifice limitation, and I would use spindles.) A Native American brought his long hair to be spun so that he could weave it in a dance belt that he was creating. It was slick and a bit coarse, but the length made it easier to spin. Other fibers that I spun included cat and dog hair as well as toilet paper. The most unpleasant thing I was asked to spin was medium-coarse steel wool scrubbing pads (and yes, it can be done). Ever since then, odd things seem to find their way into my spinning fibers. I love the challenge!

One such fiber presented to me early this year was cactus cotton. Along with fiber from the seed buds that were on the main body of the cactus, I was given a picture of the cactus. We don’t have many cacti in Tulsa so I started looking for information. I learned it was a golden barrel cactus (Echinocactus grusonii). The yellowish/creamy-colored fibers are at the top of the globe or barrel. Birds and small mammals like the fruit and use the fluff, found at the bottom of the seed pack, for nesting materials. Like kapok, another seed fiber, my guess is it may have had limited use as stuffing or insulation. The fragile fibers are 1⁄2 inch to 1 inch long and at about 100 times magnification look like crystalline threads with little flecks of colors. One cactus can provide about 1 ounce of fiber. Spun by itself it is very weak yarn, so it is better to spin it in a blend or as a core spun yarn. I spun with the gently carded cactus fiber in my back hand along with a 5/2 unmercerized cotton core yarn. Letting the twist run up the core and catch the fibers, I could, if needed, encourage them to attach by pulling and fluffing as I spun. This seemed to work better than feeding the fibers at a 90-degree angle to the core. I wonder what my friends will bring me next.

About a year ago, I was checking the Spin Off group on Ravelry and there was a new thread—Spanish moss prep for spinning. Raveler Cyndi Muller (whose ravatar is MullersLaneFarm) was looking for someone who could share the process with her. I had heard of spinning Spanish moss but had no idea what it was all about. I was intrigued and had to try my hand at spinning Spanish moss. I had already spun some moss with the green outer covering intact, but my real goal was to rett the moss and get the inner black fiber to spin. Since I have allergies and it was noted in the group thread that a reaction was possible when working with the moss, I knew I would need to be extra careful to avoid making dust. Cyndi reported she tried three different methods to rett the moss: first, putting the moss in plastic pails full of water; second, putting wet moss in black plastic bags in the sun; and third, putting some moss on a compost pile. I don’t have a compost pile, so I tried some moss in a bucket of water (it stinks) and some moss in a black plastic bag. The black plastic bag worked best for me.

The moss I used came from the hobby shop (used in flower arrangements) or a master gardener friend’s greenhouse, so I didn’t have to worry about mites and bugs. I worked with smaller amounts, so when the moss was retted and most of the outer covering biodegraded, I then processed it. I was afraid to run the moss through my drumcarder thinking the fiber would be bad for the teeth or the teeth might break the fibers into smaller pieces. I found that taking a couple of handfuls of retted moss at a time in a container of water and processing small batches was a good way for me to work. I would run each fiber that had any outer covering left between my thumbnail and first finger to scrape the leftover off. It was slow work, but I got a very clean fiber, and a lot of satisfaction.

After it was cleaned, I took a handful of fibers, teased them (fluffed them), tied some to my leader, and using medium tension on my wheel and a short forward draw, spun and then plied the yarn back on itself. It could also be plied with another yarn. I did my spinning and plying while the fiber was dry and had no problems. I believe every yarn has a use. This yarn told me it wanted to be a basket. Cyndi is using her yarn to recreate Civil War–era items such as horse blankets and Confederate carbine slings for reenactors.

Jeannine Glaves of Tulsa, Oklahoma, loves the challenge of a new fiber. Her husband wonders what she’ll be up to next. Fresh corn for dinner means that corn silk yarn will be drying that night (it’s surprisingly strong). She believes that curiosity keeps her young.