An electric spinning wheel that fits in the palm of your hand and starts at $80? I couldn't resist trying it for myself.

The Electric Eel Nano, 3 bobbins, and a power cord take up less space than a braid of fiber.

Maurice Ribble began his Electric Eel project in 2009 with a simple goal: to make his then-girlfriend, now-wife Emily an affordable electric spinning wheel. With crowd-sourced funding through Kickstarter and an active group on Ravelry, the Electric Eel wheels have caught on through word of mouth. If you haven't seen one yet, get ready to. Since appearing as the Electric Eel Mini 2 on Kickstarter in November 2018, the Nano has been purchased by over 4,300 backers on Kickstarter alone; Dreaming Robots has shipped 5,500.

I'd seen a few purple Nanos pop up on Instagram, mostly sitting on the palm of a spinner for scale. They'd never been more than a curiosity for me until I walked through a barn at the New York Sheep and Wool Festival and saw Maurice and a stack of Nanos in a sparse but busy booth. I marched up to the table and bought myself a box. 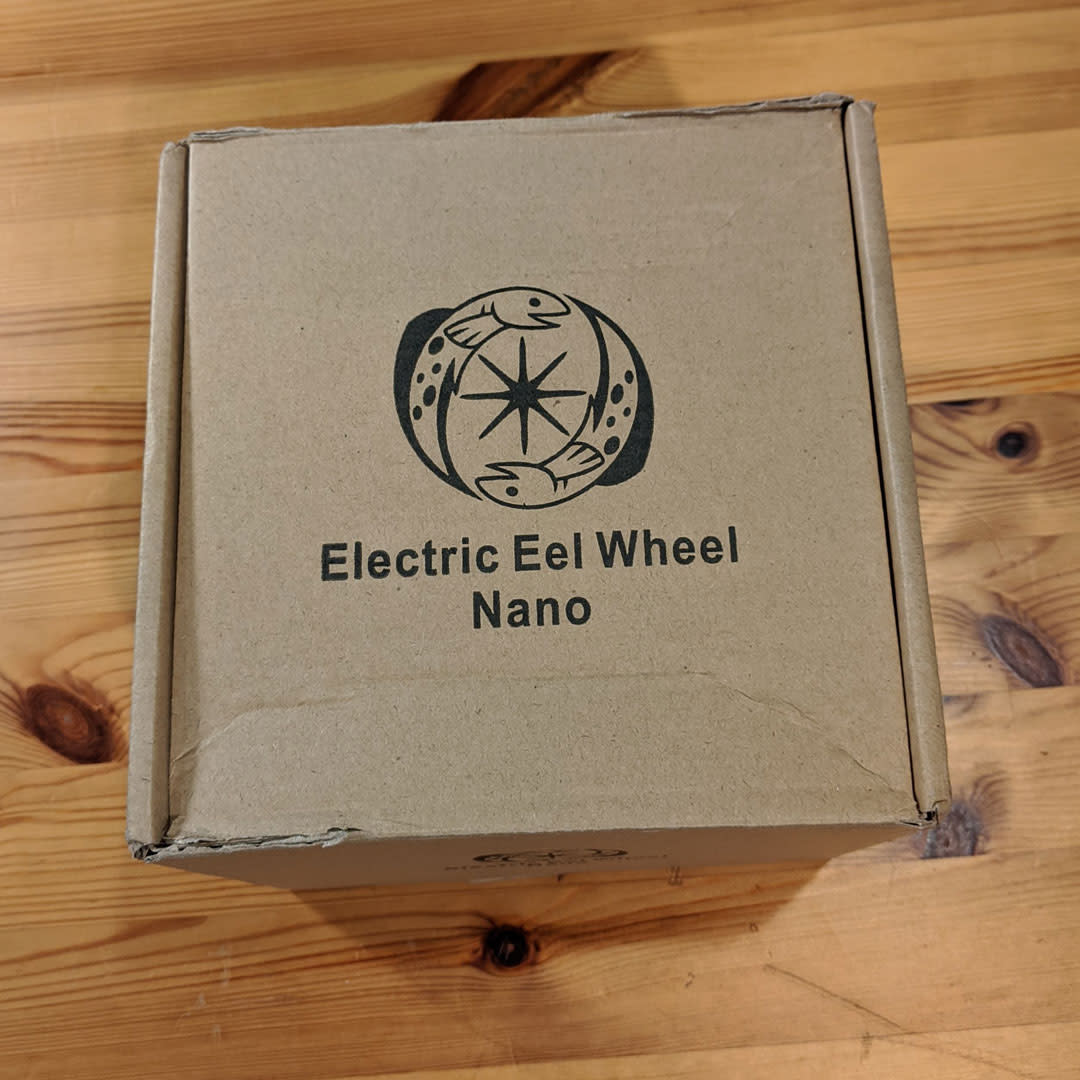 Small enough to carry on the airplane (and a little jostled by my trip home), my Electric Eel Nano weighs 18 ounces in the box.

As an unboxing goes, this one is cheating a little: I've already opened the box, recycled the bubble wrap, and even filled a bobbin spinning on it. Still, here the main contents of the box are shown above: 3 breakdown bobbins in white, teal, and purple; a spare drive band and stretchy tension band; the e-spinner itself with flyer, bearings, slider hooks, and an orifice hook; an AC power cord; and some information about the e-spinner (as well as a handy grist/twist angle/twist direction card).

Most of the e-spinner is injection-molded plastic, which helps keep this affordable, lightweight, and colorful. On the right side of the device, a Z-off-S switch controls the direction of rotation, and a potentiometer (fancy word for speed dial) controls the speed of the motor. Two simple, clever touches: 2 small magnets on the base hold the orifice hook in place, and each foot has a keyhole slot that can be used to secure the Nano to a table with suction cups or screws. Being lightweight, it's easy to accidentally draw the e-spinner toward you! 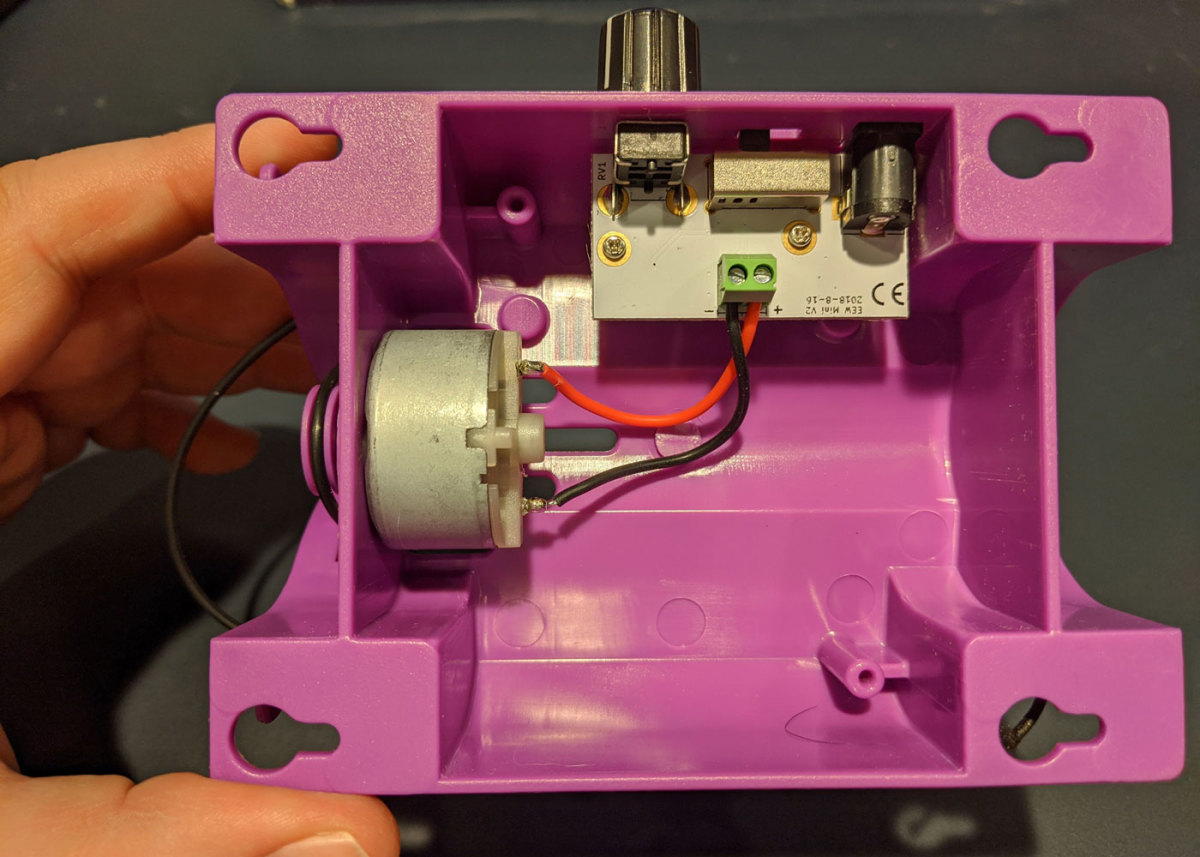 The underside of the Nano is pretty straightforward: motor, circuit board.

There are lots of open-source software projects; the best known are the Linux operating system and Firefox browser. Open source often goes hand in hand with an open collaboration approach, in which a decentralized group works on a common goal (think Wikipedia). Open-source hardware such as the Electric Eel is a newer concept.

Maurice made earlier versions of the Electric Eel and the Mini (precursor to the Nano) available as full open-source projects. Seeing which elements of the design users experimented with most, he opted to make designs for 3D-printed Nano parts available open source. "This actually has worked great, and this time lots of people are 3D printing their own parts and other businesses are selling these 3D printed parts," Maurice says. "Some people are even making their own 3D printed part designs, which is exactly what I always was hoping the EEW community would start doing."

That kind of collaboration and curiosity infuses the Electric Eel projects, from the crowdfunding to the iterations on the original design—the "main" Electric Eel Wheel recently sold out of version 5.2, and a new version designed for production spinning is in the works. If you want a foot pedal, the Dreaming Robots YouTube channel will show you how to make one; it involves wire cutters and electrical tape. In other words, there's plenty of information available to fix and modify your e-spinner, and learning to tweak and understand your wheel is part of the fun.

When I first approached the Dreaming Robots booth, Maurice was helping someone who's purchased a Nano the day before and sounded a little panicky that it made a clicking noise. Maurice showed her not only how to make sure the flyer was seated properly, but also how to sand down any seams from the injection-molding process and add a little tape to the flyer. He pointed out the device's website for getting started information, including the Ravelry and Facebook pages that users contribute to. 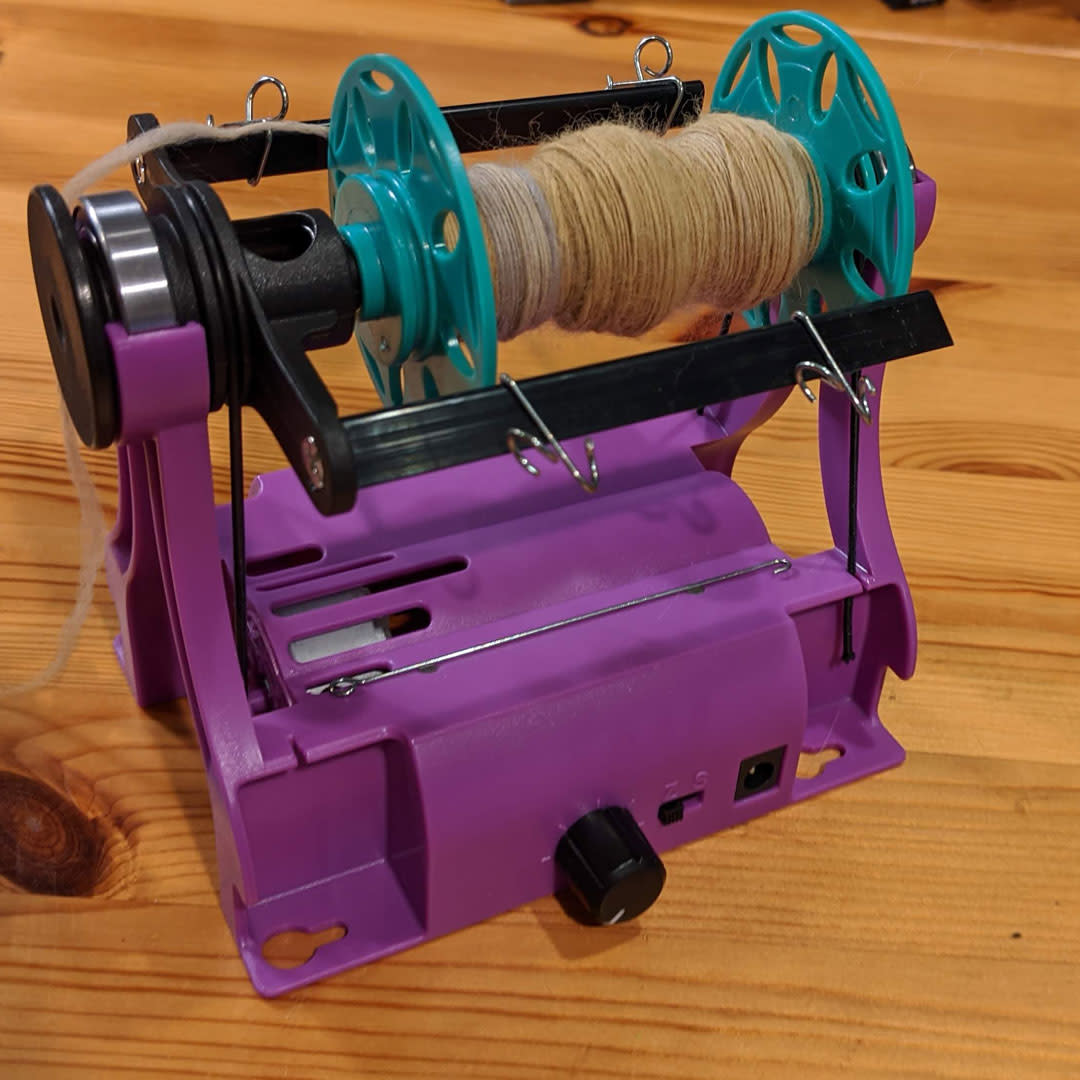 So how does it spin?

It's fun! It has elements that would make it a great toy, but it's not just a toy.

I haven't started exploring the many available hacks, which are essential to the Electric Eel experience. Still, I've filled a bobbin and a half, and I can't wait to spin more. The top speed of the basic motor is 800 rpm, with an expected life of 1000 hours. If you are a production laceweight spinner, this is probably not for you. Without swapping out the small sliding hooks for bigger ones, very bulky or hairy yarns might get tangled.

But to take to knit night, or spin in the car, or sample, or get a new spinner hooked? This is an e-spinner that I can easily take along and play with on the go. (Especially because, thanks to my electrical engineer spouse, I have a custom battery pack. I think Maurice would approve.)