Making the Grade: The University of Wyoming’s Wool-Judging Team

When attending a fiber festival fleece-judging event, do you ever wonder what qualities wool judges look for in a fleece? We wanted to know, too! We asked the coach of a wool-judging team how fleeces are graded.

A wool judge examines a fleece at the 2016 Estes Park Wool Market in Estes Park, Colorado. Photo by George Boe

In the we asked the coach of a wool-judging team how fleeces are graded. Here’s what he had to say.

Meet the University of Wyoming’s (UW) resident sheep guy, fleece-judging coach, assistant professor in the Department of Animal Science, and UW Extension Sheep Specialist Whit Stewart. UW hadn’t had a fleece-judging team for 16 years, but the team recently competed in the National Western Stock Show (NWSS) in Denver, Colorado. One of their teams won the competition, and one team member won overall champion. 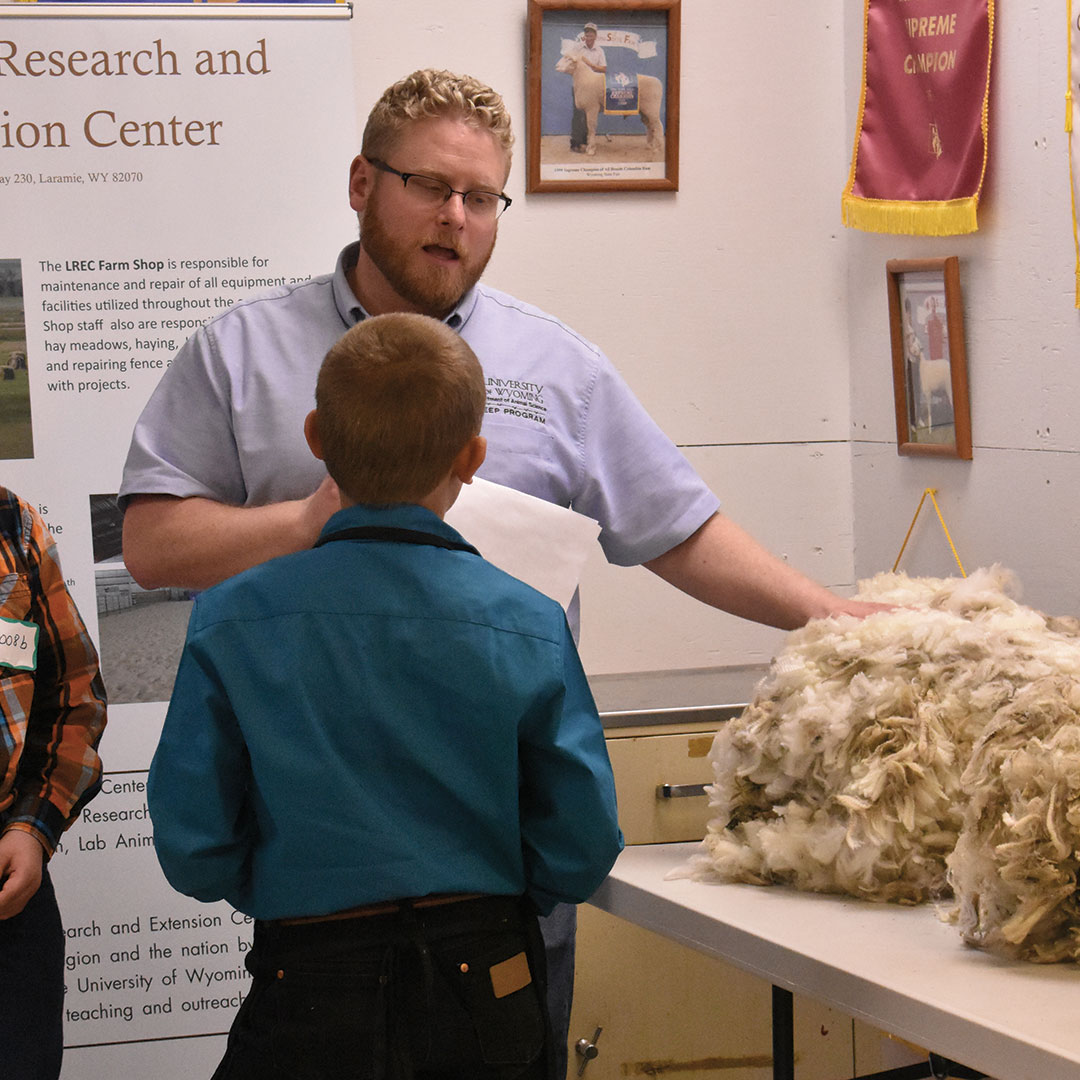 Spin Off (SO): How did you get started judging sheep’s fleeces? How long have you been judging?

Whit Stewart (WS): I grew up on a cattle and sheep farm in western New York. We specialized in selling lamb. I became involved with wool judging as an extension educator in northeast Wyoming with University of Wyoming in 2011, where I coached the county 4-H team. When I decided to pursue my PhD in New Mexico, part of my assistantship was to coach their intercollegiate wool-judging team, which I did for two years. I judged both commercial and handspinning competitions at both the New Mexico and Wyoming state fairs. My first faculty position was at Montana State University as state sheep and wool specialist and director of the Montana Wool Lab, where I oversaw the analysis of wool samples and conducted research. I’ve judged some other fiber types, but as a sheep scientist, I’m pretty wool-centric given my background and academic training.

SO: Tell us about team competitions: What kinds and how many classes make up a competition? How are teams judged?

WS: The collegiate wool-judging format is a 750-point competition composed of a 300-point grading rail, 300 points for class placings of either three breed or three commercial classes, and 150 points for three classes of oral reasons. [Editor’s note: Oral reasons are a portion of wool and livestock-judging contests. Participants stand before a judge and, without notes, describe the class they judged and defend their placing choices from memory.]

The grading rail is composed of 15 fleeces of all types. Fleeces range from 19 to 40 microns, range in yield from 38% to 70% clean wool, and are of varying staple lengths. Each student gets two minutes with each fleece and has to estimate the grade/spin count from 10 options; clean yield to within 4% for full points; staple length appropriate for the grade from 3 choices; purity, good or bad, which includes the presence or absence of black fibers and kemp fibers; and character, which includes crimp, color, and condition of fleece and is ranked good, average, or poor. Eight minutes are permitted at the end to go through the 15 fleeces and double-check or reevaluate the grading choices. The closer the answers are to the correct answer, the more points given for each.

The class portion requires competitors to correctly place four fleeces on a table according to clean weight for commercial classes and clean weight and breed character for the breed classes. This not only requires students to estimate the raw weight but also calculate the clean yield, which means estimating which fleece is going to produce more clean wool for the wool buyer and less waste from breaks and tender wool at the textile phase. In breed classes, if there are similar-weight fleeces, students need to understand which ones adhere most closely to breed standards and character so that they can correctly place the class. There are only three breed classes at any one competition, but they can be Merino, Rambouillet, Targhee, Columbia, or Corriedale fleeces.

The oral reasons are taken from three of the six classes, either commercial or breed classes. These are memorized justifications provided to contest officials by the competitors. Each set of oral reasons has a maximum of 50 points, is scored according to the accuracy of how the competitor placed the class, and requires a very descriptive explanation of each fleece from first to fourth place. The way that fleeces are described and placed varies between commercial and breed classes. In the commercial class, reasons are tailored to the commercial wool industry justification, and breed classes are generally from the sheep-breed perspective. 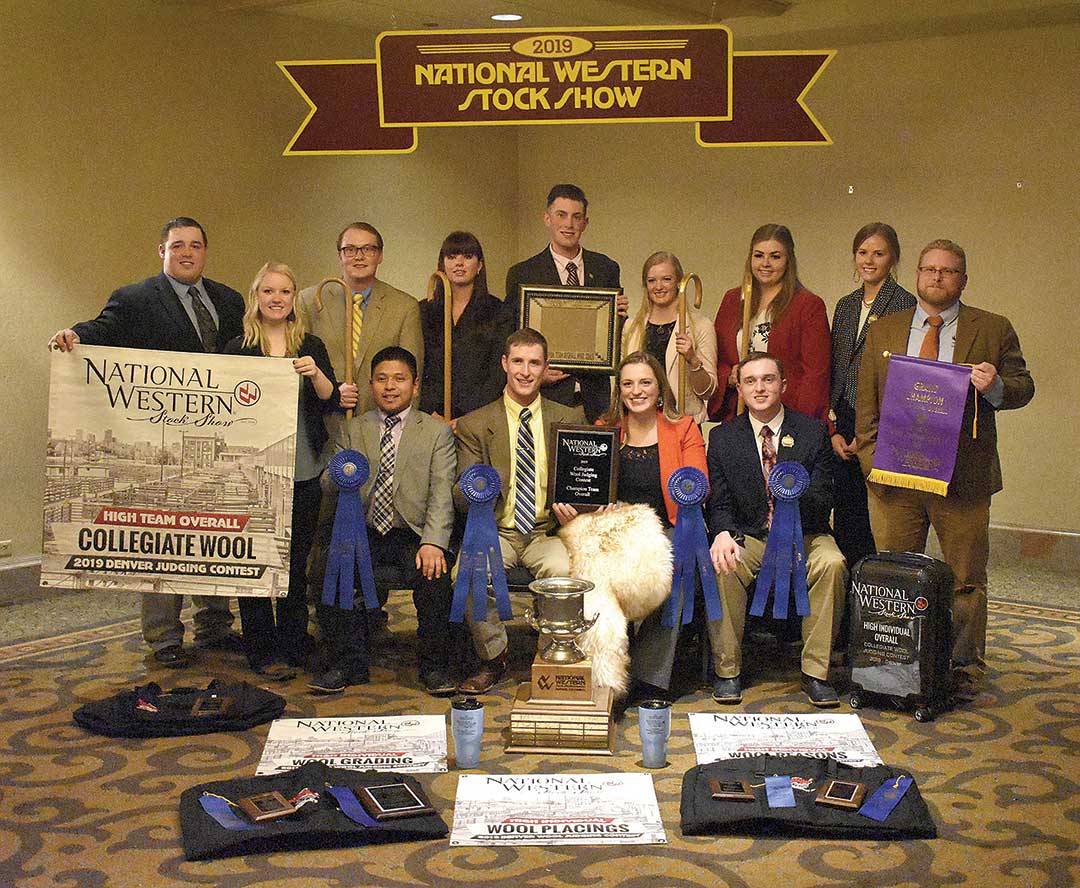 SO: How can sheep producers support your team?

WS: We need donations of fleece to the wool-judging program at both 4-H and collegiate levels. I’d love to have more wool donated from different operations so that students may see wool representative of the entire industry and from different regions of the United States. We have a pretty extensive collection of wool to practice on at the UW’s wool-judging program, but we need more support for events such as NWSS.

SO: Can you describe the best fleece you saw at a recent competition?

WS: I think it’s always exciting to see bright white and well-prepared fleeces at the collegiate contests. Since I’m a sheep guy, I really like coming across breed classes that are challenging to judge, because they’re all really high quality. I really liked the Corriedale breed class at the NWSS contest this year. The long staple lengths, uniform crimp patterns, and soft handle made that a fun class, although it tripped up some of the competitors.

SO: What do you like most about judging wool and coordinating the team?

WS: I love that sheep are a dual-producing livestock species, meat and fiber, which gives our industry an excellent story to tell. I love sheep and the products they produce for society, both in modern and ancient times. I like coaching the students, which creates both awareness and knowledge about the sheep industry. The decision-making and oral articulation skills developed through 4-H and collegiate-level wool judging are translational to the lives of those who are involved. I also like the university rivalry aspect of competing against larger universities. It’s a healthy competition, and it’s almost like we are competing for Mountain West sheep producers in addition to those in Wyoming. 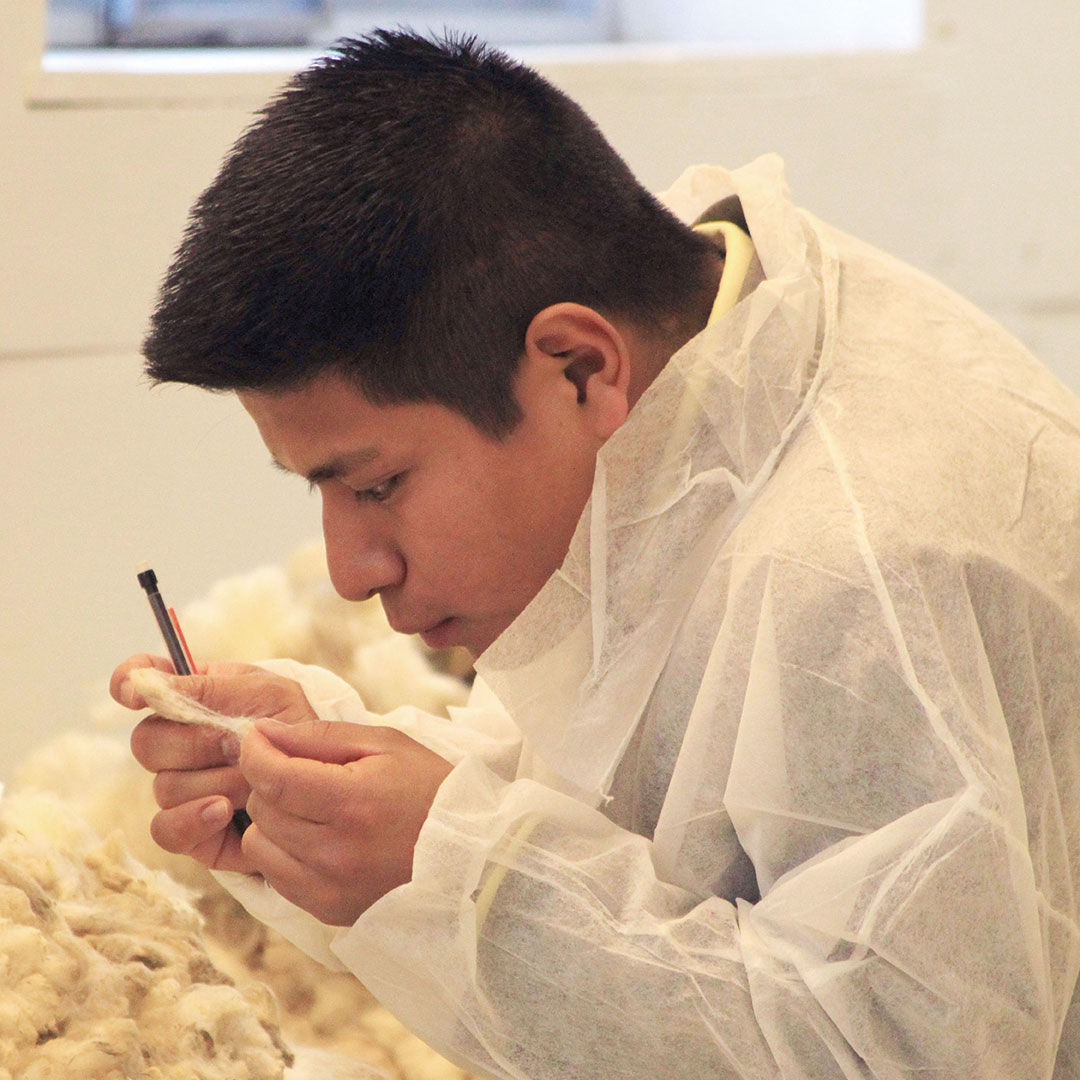 SO: What is the most challenging aspect of judging wool?

WS: Having conducted and published studies in the sheep and wool industry, it’s sometimes hard to reconcile laboratory results with how the “naked eye” would official a contest. I like the fact that we use laboratory-standardized instruments to tell us what the wool actually is, but that doesn’t always allow us to coach students to be 100% accurate. My fellow coaches in collegiate wool judging sometimes find it frustrating that a fleece may officially be a 60s grade but look like a coarser 56s grade, which may lose them points in a competition. But I like those wild cards. The NWSS contest is usually that competition where there are wild cards, and the winning team usually has been trained to know more about wool fiber and the industry.

SO: Have you judged fleeces for handspinning? How is judging a handspinner’s fleece different from judging fleece used commercially?

WS: I’ve judged four or five handpinning-fleece shows and enjoy doing so. However, they’re particularly challenging. The criteria aren’t as objective as the traditional industry shows (weight, yield, staple length, and purity), but the principles of uniformity and character (crimp, color, and condition) still apply. Handspinners know as well as anyone that cleanliness, the absence of vegetable matter, and overall preparation of the fleece are very important. This can be challenging especially when excessive preparation can reduce the weight of the fleece so dramatically that it becomes too light. These scenarios are fun challenges at the state fair fleece competition but require me to think differently than when I’m coaching our wool team.

SO: What advice do you have for new wool judges?

WS: I think learning objective, laboratory measurements of wool and what they mean is important, as they give us a scientific basis for wool evaluation. Once we learn these, we can then establish the more subjective criteria that make wool judging fun, especially for handspinning applications.

First appeared in the Summer 2019 issue of Spin Off.