Wool Basics: What is Grease?

Have you ever stopped to wonder what is grease? Spinning terms can often lead to confusion, even for the seasoned handspinner.

Who’s fleece are you calling greasy? Learn more about what makes up the grease in a raw, wool fleece. Shown, the Leine sheep breed, which is an endangered breed that originates from the area close to the river Leine in Northern Germany. Photos and illustrations by A. Sabine Schroeder-Gravendyck

Grease is a natural part of a raw wool, but when working with fleece, we do not get in touch with pure grease. Secreted by the glands in the sheep’s skin, natural grease originates from the sheep, as does suint and the fiber itself. However, what is often called “wool grease” is a mixture of suint, dirt, grease, and more. Let’s take a closer look.

Wool fat, or grease, is produced by the sebaceous glands accompanying the follicles that grow the fibers. A complex blend of waxes, oils, fatty acids, complex alcohols, and more flows through the excretory duct into the area where the new fiber leaves the hair follicle and slides toward the skin surface. And once grease and fiber reach the surface, they become part of the fleece; the grease coats the fibers. 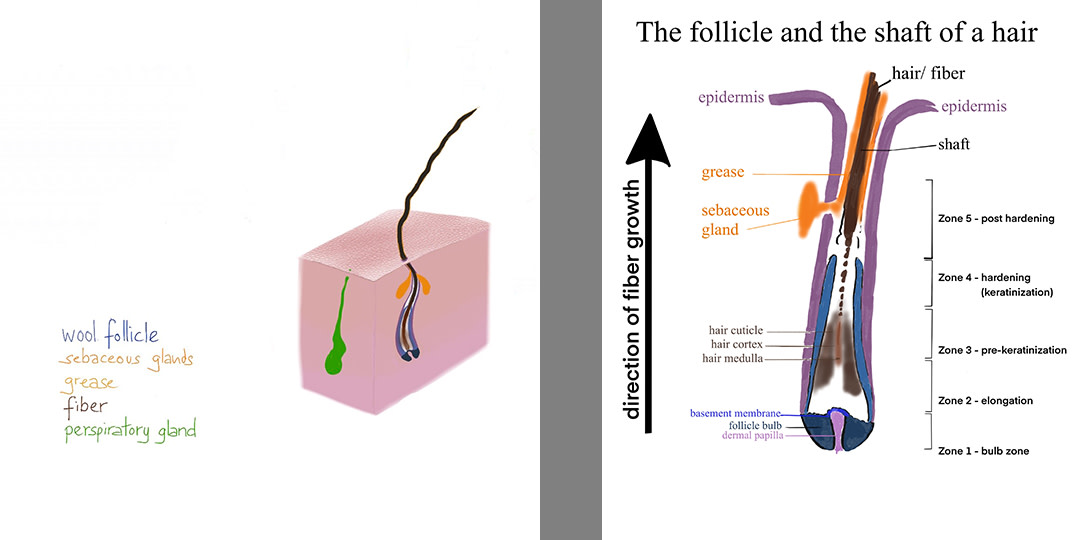 Illustrations of the wool follicle and glands of a sheep’s skin.

Produced by the perspiratory glands in the sheep skin, suint is sheep sweat and consists largely of potash salts of various fatty acids and small quantities of sulphate, phosphate, and nitrogen compounds.

In a fleece, suint and grease combine into what is often called yolk. This substance protects the skin and fiber, keeping both elastic and smooth, and aids in maintaining staple structure. Yolk is hydrophobic and adds to the water-repellent quality the F-layer provides to every fiber’s cuticle (see “Wooltripping: What’s Inside the Not-So-Familiar Wool Fiber?” by Deborah Robson, Spin Off Spring 2018).

If you wash greasy wool and let the water cool after taking out the fiber, you will get a redeposition of the grease at the washing basin, close to the water surface. It’s possible to harvest it, and after cleaning and removing the impurities, you would have lanolin, a good emulsifier and skin care product for making unguents and skin cream. However, extracting the lanolin needs to be done carefully, removing all pesticides and insecticides that may be contained in the grease. 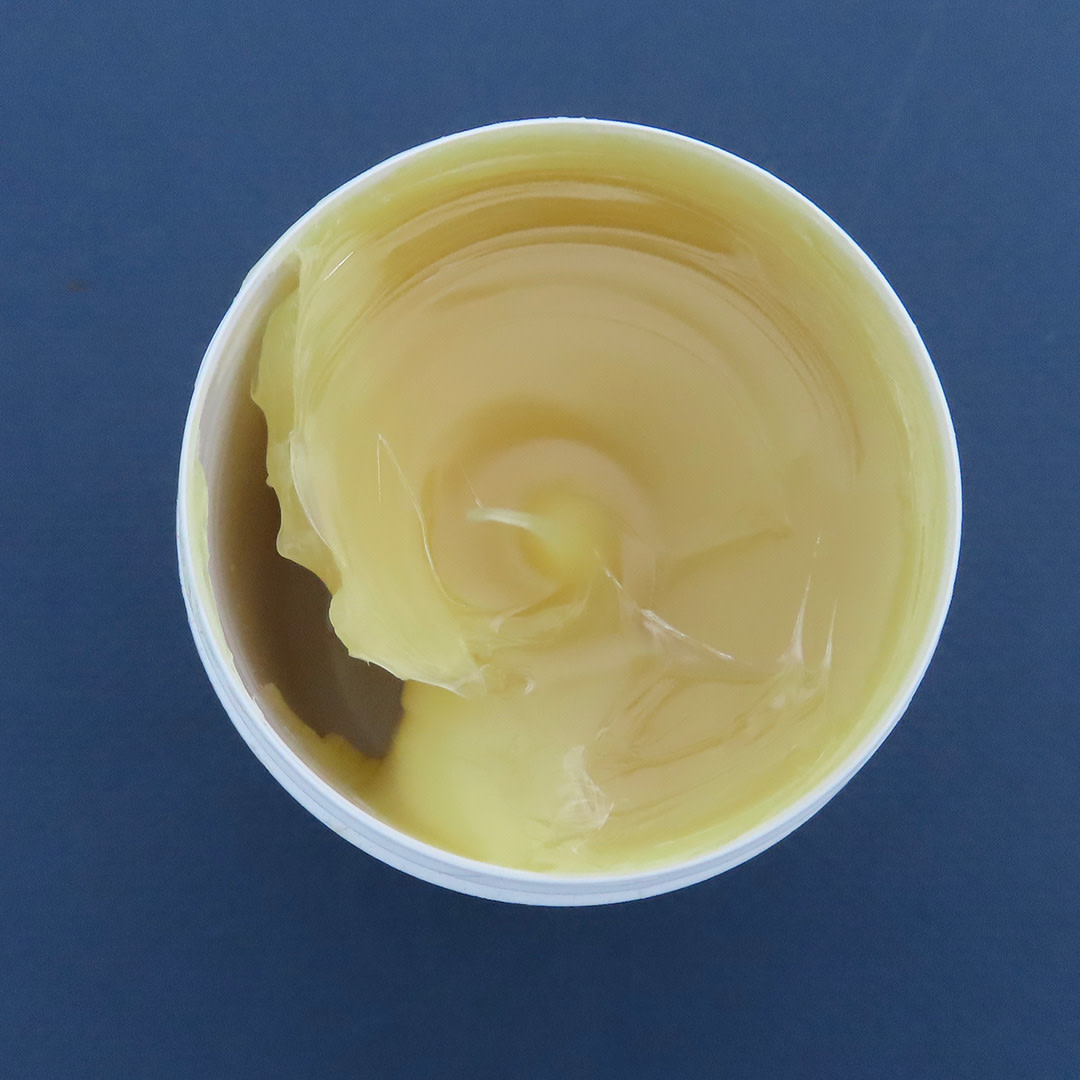 Use lanolin in homemade ointments and creams, but be mindful to remove all impurities.

Wool grease is not water soluble, and its consistency depends on the temperature. At about 104°F (40°C), it turns from a solid to a liquid. This melting point may be a little lower or higher depending on the composition of the grease, breed, flock, individual sheep, feeding, and other factors. With this in mind, we can choose a water temperature for wool washing. To remove grease, the water temperature needs to be at least several degrees higher than the melting point of grease, or 110°F (44°C), during the whole washing process. Otherwise, the grease will re-deposit on the fiber.

To remove a substance that is insoluble in water, organic solvents can be used, but these are mostly dangerous and toxic. To wash fleece, use a mild detergent. (Learn more about washing fleece in “How to Wash Fleece and Leave the Grease.”) Greasy fleeces call for more detergent. In general, fine wools have a lot of grease, easily 15 to 16 percent of the weight of the fleece, while the fiber may be about 40 percent of a raw fleece. In addition, grease can bind to dust and dirt, skewing the weight of raw wool and the ratio of fiber to grease. Compared to fine wools, the landrace breeds, such as Shetland and Navajo-Churro, are mostly on the other side of the spectrum. Medium breeds and crosses can fall somewhere in between or toward one extreme or the other.

If it so happens that you cannot remove the grease through washing, there are a range of things that can happen. 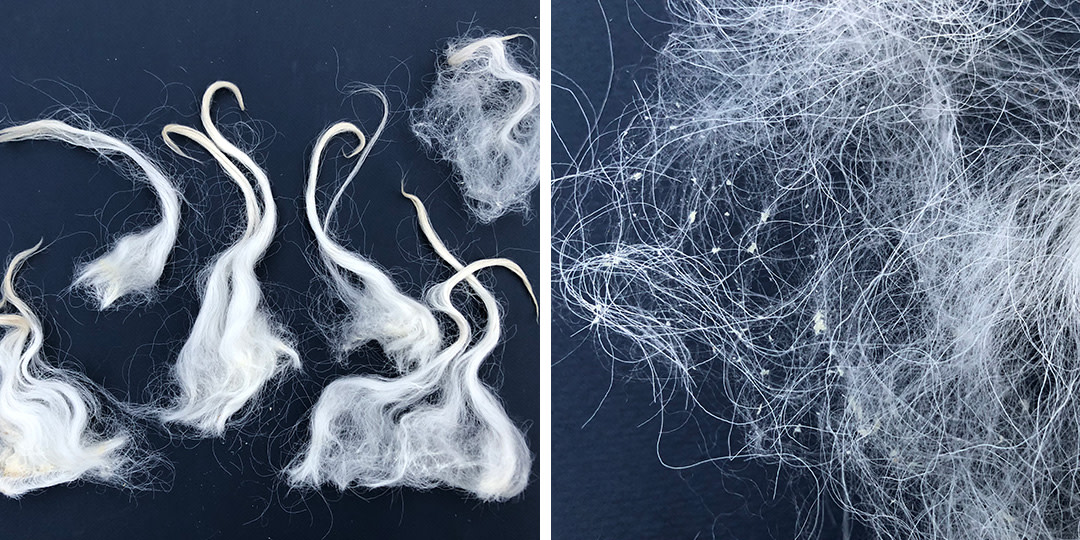 Washed Moorschnucke locks, an endangered breed with a double-coated fleece. Notice the brittle and sticky grease remaining in the fiber, shown on right.

Spinning in the Grease

Most spinners prefer clean fibers, but some people like to spin raw wool, unwashed and directly as it comes after shearing and skirting. This is commonly referred to as “spinning in the grease,” and it’s usually done in a warm environment (see melting point above) and with fleeces that aren’t overly greasy or dirty. Since even a small amount of grease can ruin tools, preparations, such as carding and combing, are usually skipped, or handspinners will use tools dedicated to processing greasy fleece.

Unlike grease, suint is water soluble; it washes out with plain water. Soaking raw wool in water will bring out the suint’s natural ability to saponify in the presence of grease. Soaking wool in water will yield a pretty clean fleece, but the fiber will still be considered greasy enough for “spinning in the grease.”

A word of caution: Raw fleeces age quickly under the conditions in which most spinners store fleeces. Oils and wax react with surrounding substances, such as oxygen; bacteria grow and release the products of their metabolism; and exposure to light can break down fibers, too. 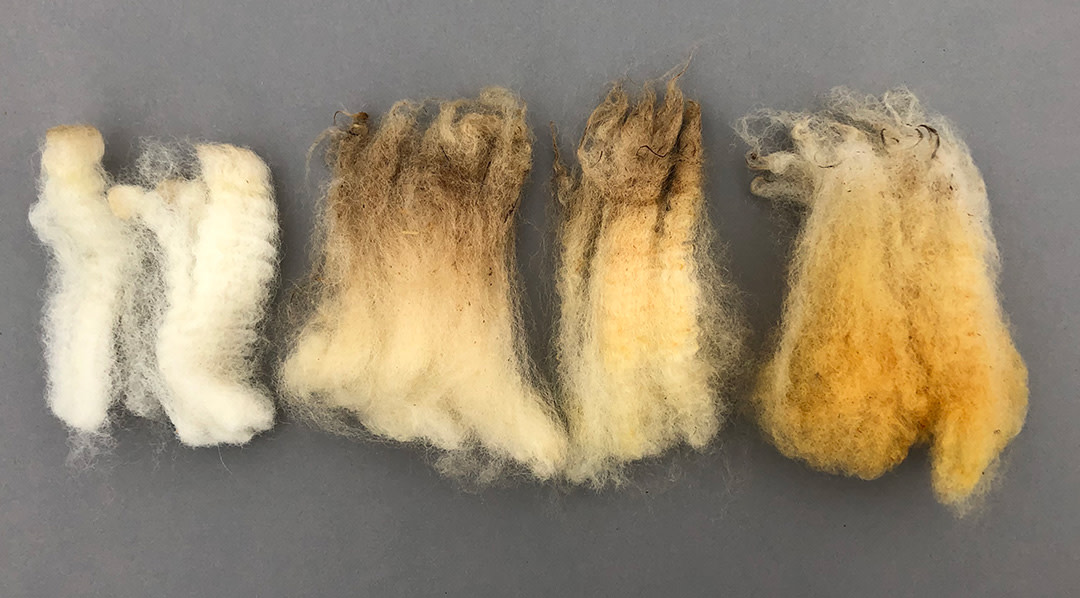 These locks are from different shearings of the flock of Leine sheep in the photo above. Notice the change of the color of the grease in the raw locks. Left to right: July 2020, cleaned with fermented suint method; 2020 raw, three months old; and 2017 raw, three years old.

A. Sabine Schröder-Gravendyck, D.V.M., makes her home on Germany’s North Sea coast where she works as a naturalist and educator in sustainability and ecology. She is always looking for new ways to help people merge their personal spaces with nature. You can find more about Sabine on her website, florafauna.pro.