Connecting Threads allows visitors to experience the process of turning a sheep’s fleece into a piece of clothing through a natural dye workshop.

Imagine a quiet knitting spot with your back resting on the rich tapestry of an eighteenth-century wall hanging and the pounding surf of the Atlantic Ocean as a sound backdrop. Or would you prefer to hear warm, inviting music enjoyed in small village halls, which are nestled in the rich carpet of Cape Breton’s fall colors?

The traditional music of Cape Breton draws people from all over the world to the Celtic Colours International Music Festival. During the festival’s twenty years, it has developed into a deep experience of all Cape Breton culture, including the locally celebrated fiber arts. Autumn doesn’t get much better than that, does it? 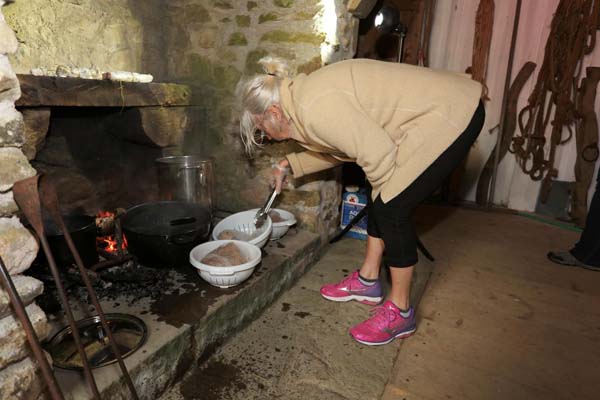 The fleece was simmered in a dyepot of applewood over an open fire for several hours to obtain a warm, golden brown color.

One of the many community events sponsored by the festival, Connecting Threads allows visitors to step back in time and experience the process of turning a sheep’s fleece into a valued piece of clothing or household item through a natural dye workshop that animator Barbara Kelly-Landry and I lead. Some festival-goers enjoy downtime at Fortress Louisbourg while fleece from the local sheep simmers in cauldrons over an open fire. Students practice color-blending previously dyed fleece, spinning on an assortment of drop spindles, and working the yarn on knitting needles or on canvas in a traditional style of needlepoint. (Editor’s note: To explore dyeing with natural dyes, download Interweave’s Dyeing Yarn Free eBook: Using Natural Dyeing Techniques.) 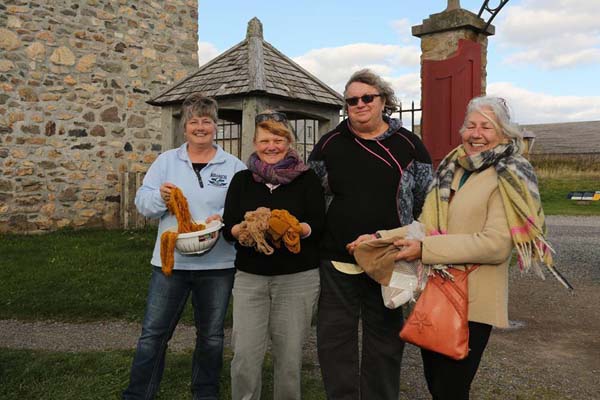 Several participants from the Natural Dyeing workshop of Connecting Threads 2017, holding golden skeins of yarn. (The author, who led the workshop, is third from the left.)

This was women’s work, and I am sure that some of the original female inhabitants would be happy to see the current interest in their craft. Fortress Louisbourg is a National Historic Site that is a one-fifth reconstruction of the original French Fortress, which was built in 1713 and abandoned in the 1760s. The reconstruction began in 1961 with out-of-work coal miners. As the Right Honourable John G. Diefenbaker, then Prime Minister of Canada, announced, “The restoration is to be carried out so that the lessons of history can be animated.”

_Annamarie Hatcher is a Nova Scotian by birth and a Cape Bretoner by choice. She has a PhD in zoology from the University of Western Australia and has lived and worked in Australia, St. Vincent, and Canada. Her spinning journey started forty-five years ago and has kept her sane through several children, moves, and career changes.