A great DVD set to add to your collection

I’ve rattled on for years about how hard it is to put spinning instruction in print. It’s such a dynamic, process-intensive craft—so hard to capture in one-shot increments. For all my carrying on, though, I think we’ve done a pretty good job. Over forty years of Spin-Off, and more books than I can even remember. And this printed material really has helped people learn to spin, either on a spindle or on a spinning wheel, and improve their skills. 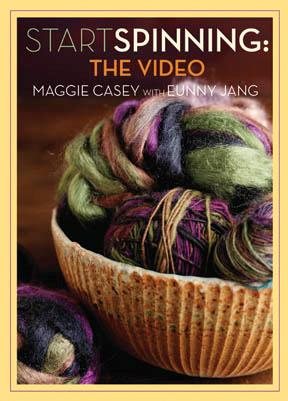 One of the best of the books is Maggie Casey’s Start Spinning. And the best possible “spinoff,” if you’ll forgive me, is her Start Spinning: the Video. It’s Maggie the Teacher in action, from choosing a good beginning fiber to predrafting to making a good single to plying and finishing. It then goes on from there. Two solid discs full, more than two hours of viewing time.

If you’ve ever had a class with Maggie, you know she is probably the calmest spinning teacher on the planet. It’s bound to be a part of her success. Getting beginners over the “white knuckle” phase where they’re afraid to let go of the yarn is one of the most important steps. I’ve even known of teachers who employed alcohol, the drinkable kind, for this step. Maggie just employs great serenity. One thing that makes this DVD set special is that it’s not just Maggie talking to the camera, as pleasant as that would be. Great teachers flourish when they have great students, and Maggie has Eunny Jang. You may know Eunny as the former editor of Interweave Knits, or as a knitwear designer, or as an engaging blogger, or maybe even as a great cook.

What you may not know is she is also yarn-obsessed, and one of her dreams is to learn to spin exactly the yarn she wants for the project in her fertile imagination. So as Maggie’s Student-for-a-Day, she asks all the right questions—the ones you would probably ask if you had been there. Such as:

• Why do you have to spin your singles in the Z direction? You don’t. But the traditions behind this standard may surprise you.
• Why would you want to spin a worsted-style yarn for a cable sweater and a woolen-style yarn for color stranding? There are good reasons, and we’ll show you how to spin both, but as a spinner you can do whatever you want.
• Why does the fiber just whip right out of your hand and onto the bobbin sometimes when you least expect it? Ahh. Here’s how to get around that annoyance.

And so on. If you are just learning to spin on a spinning wheel, or if you want a refresher, or just another point of view, here’s what you need. I know I’m sounding like a salesman instead of a creative director, but I can’t help it. These DVDs are just so good.