More than a decade ago, my son sent photos he had taken while hiking through Yunnan Province in southeast China of a woman making thread, somehow, from a leaf. I’ve spent the past 10 years trying to determine what the leaf was: rhododendron? Probably not, even though their leaves are of a similar shape, and the backs are velvety. Lambs ears? No. Both sides are hairy, and it just doesn’t work. I’ve tried it. A Miao indigo dyer I met recently in Szechuan Province identified it as firegrass, which translates as ramie. Clearly, this is not ramie. 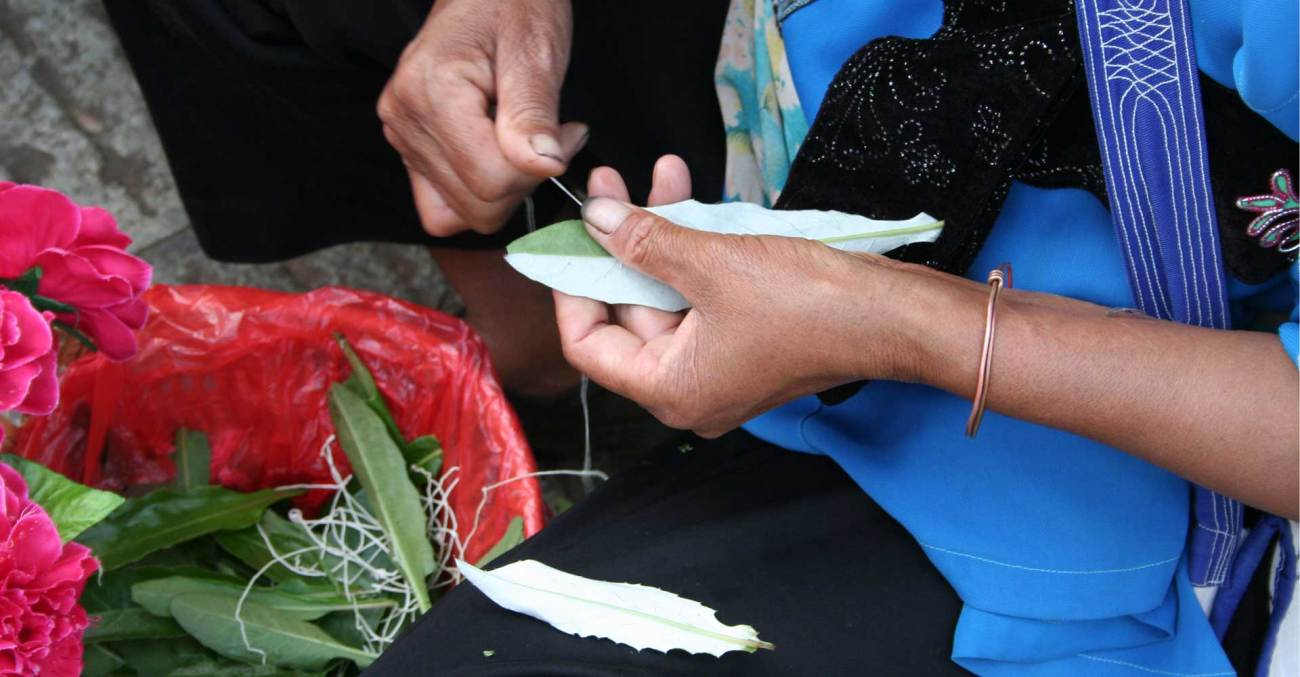 The spinner finger spins down one side of the Gerbera delavayi leaf, from tip to stem.

Finally, a random internet search turned up a widely cited paper by a group of Chinese researchers showing some ceremonial garments woven of . . . gerbera! It’s best known here as African Daisy, that common, showy bloom to be found in every floral department of every grocery store. That species, also a popular garden annual, is generally G. jamesonii and tends to have smooth, even waxy leaves. The Chinese species is Gerbera delavayi, commonly known as firegrass or fireweed. It’s not pretty, but the backs of the leaves are clad in a long, waxy indumentum, or fine hairs. The waxiness is extreme, making the plant easily flammable, and hence the common name. 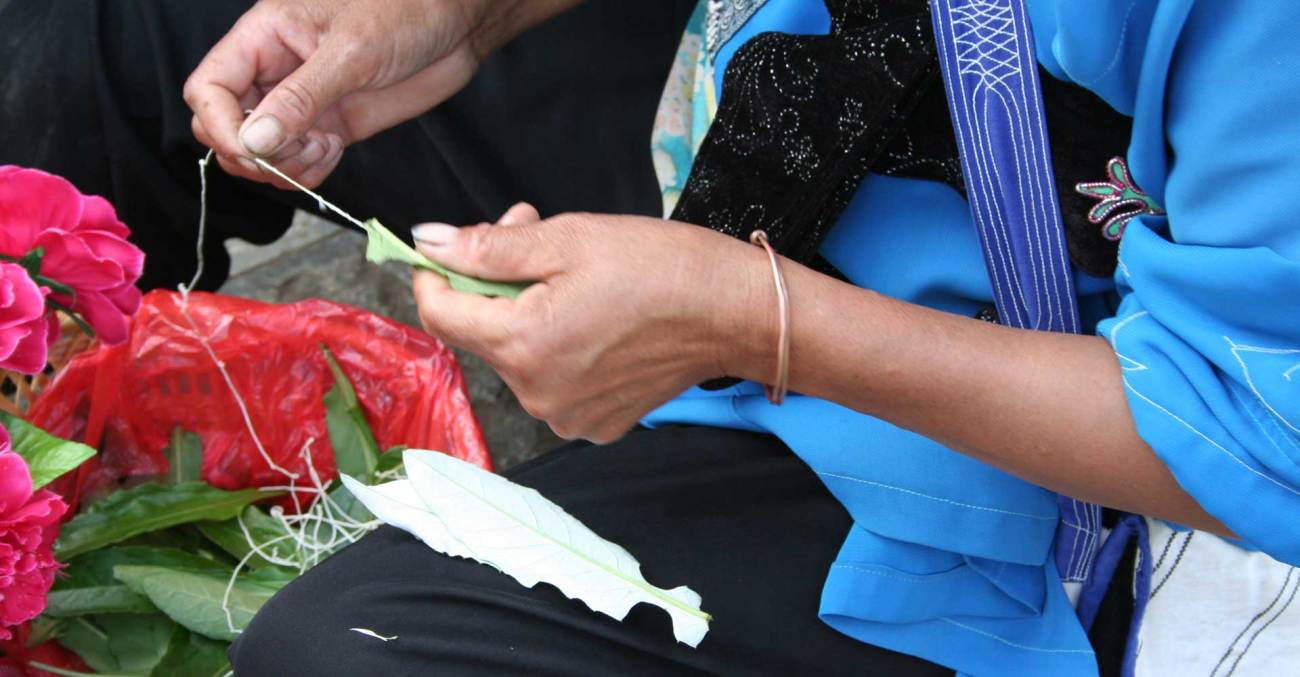 According to the paper in Economic Botany (see Resources), fireweed fabric can be either a blend of fireweed and hemp or pure fireweed. The former is warm, lightweight, and durable but time-consuming to produce; the latter, soft, comfortable, and breathable. The fibers are similar to cotton in many respects, but four times as waxy, which would make it more easily spinnable.

Gathering the leaves is part of the Torch Festival, an important celebration among at least some of eight ethnic minority tribes known to use the plant. The fiber production has been designated an intangible cultural heritage, and the plant’s flower, unprepossessing in size and color, is considered a lucky flower. 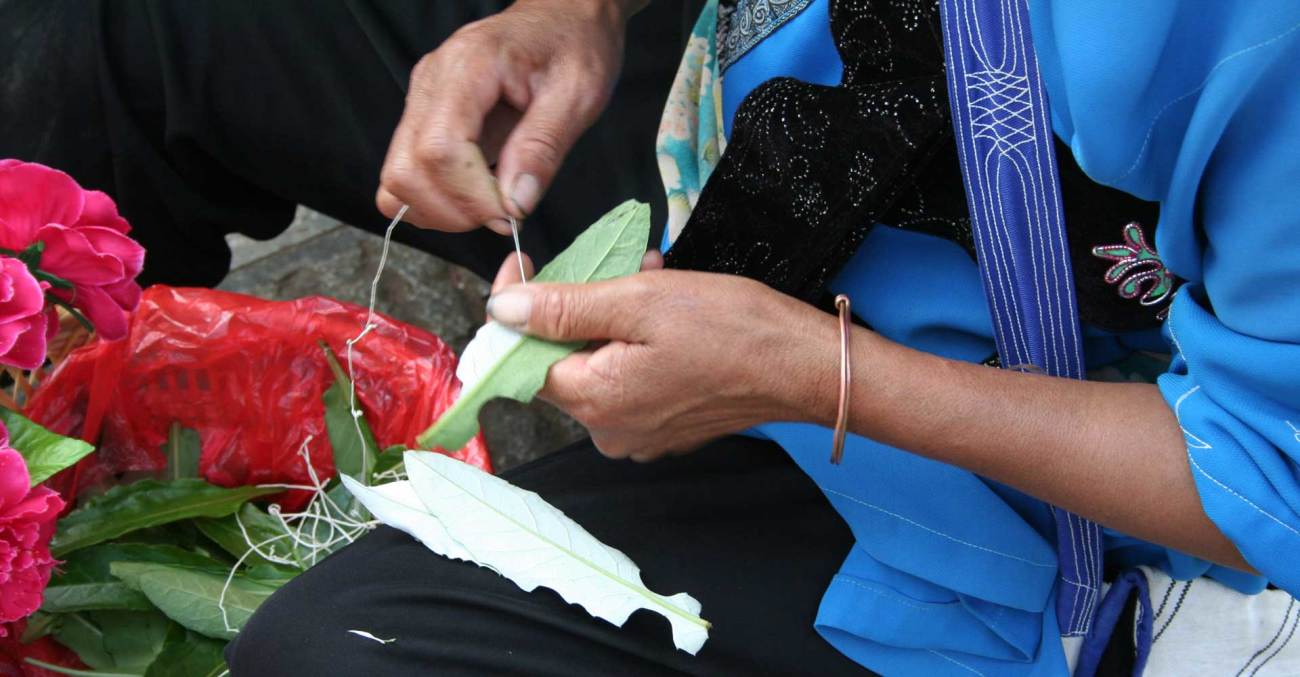 Next, the spinner spins her way down the other side of the leaf.

As the Chinese government becomes more supportive of traditional crafts of the ethnic minorities, demand for fireweed textiles is increasing. As with other crafts, though, younger generations are not learning and practicing its production. The elegantly simple vests, dyed with local flowers and treasured within families, are destined to be museum relics. The plant will continue to flourish along mountain paths, its special property the stuff of legends.

Linda Ligon is one of the cofounders of Long Thread Media.

This article was published in the Winter 2021 issue of Spin Off.