Most new handspinners start with drop spindle, but spindles soon multiply in the quest to produce a variety of yarns. So what sets the Scottish spindle apart? Its mobility.

Spinners know that spindles are addictive. Before you know it, you’re a collector seeking out special spindles with a unique history and purpose, such as the Scottish spindle or dealgan (pronounced jal-a-gen), which lacks a whorl.

Spinners have several options for whorl-less spindles, most famously the Russian supported spindle. The French spindle, generally a hand- or lap-supported spindle, becomes a suspended spindle with the addition of a hook for plying. 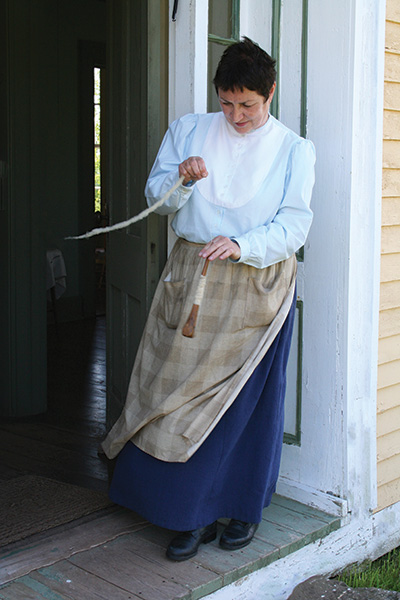 The traditional Scottish spindle was designed with spinning on-the-go in mind. In the article “Scottish Spinning Traditions in Cape Breton,” featured in the Winter 2018 issue of Spin Off, Dr. Annamarie Hatcher explains, “The dealgan can be used while walking or herding sheep, then stored in a back pocket or in a fold of the kilt.”

Urban spinners rarely herd sheep today, but a sturdy Scottish spindle might be just the tool to have stashed in your bag for spinning while herding a brood of children about town. Plus, in a pinch, Scottish spindles can also stand in for a nøstepinne, a tool for winding a center-pull ball of yarn.

Wisconsin spindle maker Scott Snyder noticed an uptick in the interest of Scottish spindles back in 2016, and since then, the curiosity hasn’t waned. Scott typically spins fingering-weight singles on his Scottish spindles and uses it for plying, too. He says, “You can get a surprising amount of fiber on these spindles. I have put more than eight ounces on one.”