Llama Fiber: A Realm of Possibilities

There's more to these camelids than you might think; what a variety!

Misty Morn’s Just North of Amazing—call name: North. This fella got rave reviews from all over the United States and some llama folks from Europe. Phenotype: Suri. Photos by Vick Barylak and courtesy of Karen Caldwell, Misty Morn Llamas unless otherwise noted

In my regular visits to the local yarn shop where I often indulge in a little tactile therapy, I have noticed that many luxury blends include “baby llama.” I was intrigued, having the impression that llamas were guard animals that ensured the safety of fiber-bearing alpaca flocks. To satisfy my curiosity, I searched out llama fleeces, with which my friend Barbara Kelly-Landry, my Ashford spinning wheel, and I could experiment.

I was a bit shocked to find out that, according to the Llama Canada website, llama and alpaca fibers are sometimes considered the same commercial product in South America, where the species originated. The finer fiber is sold as alpaca and the coarser as llama, irrespective of which animal it came from. 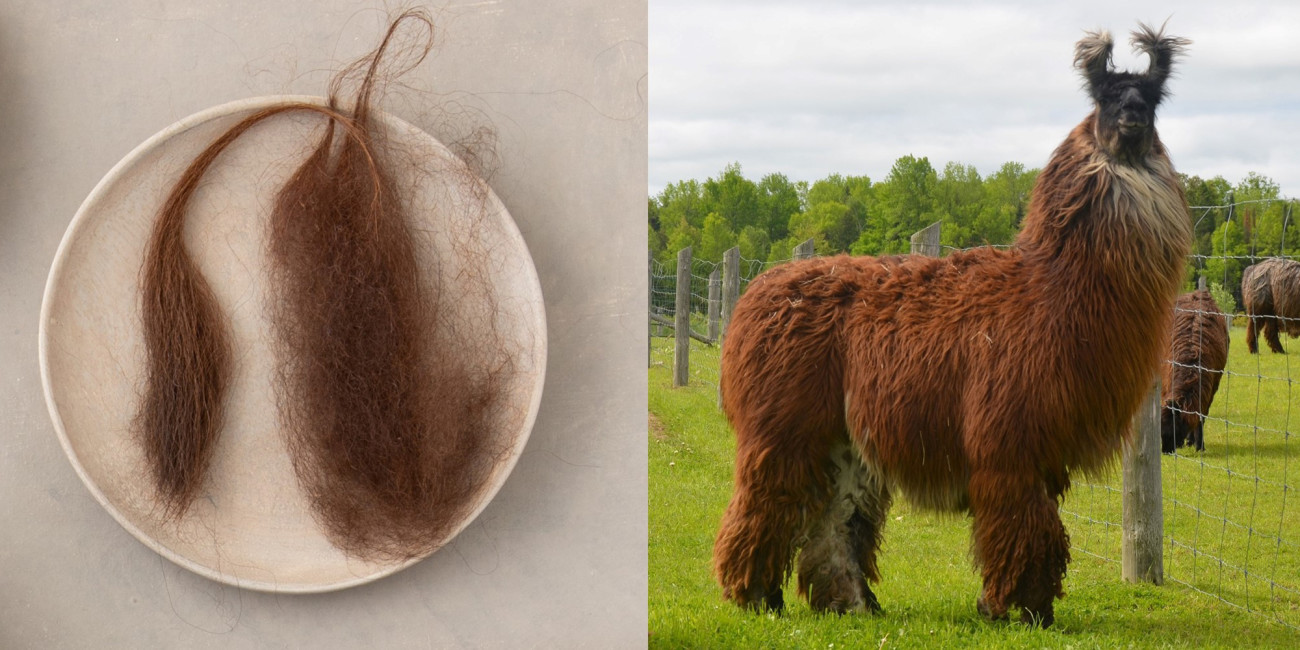 The Search for “Real” Llama

Some llamas produce fleeces similar to the wooly huacaya alpaca. However, fleece quality is less of a sure thing with llama. The large variation in fleece characteristics is due to two factors: First, most animal-husbandry efforts over time have not been oriented toward fleece quality, so there is large variation in those genes that control fleece characteristics. Secondly, all four species of New World camelids can readily interbreed. That lovely “alpaca” fiber that you purchase may come from an alpaca, llama, or anything in between.

I wanted to be sure that Barbara and I had “real” llama fleece to work with. My research led me to Misty Morn Llamas in the Ottawa Valley, Ontario, where Karen Caldwell raises silky, Argentine, and suri llamas. Karen’s sole interest is to breed llamas and save bloodlines for the future. Her breeding stock is registered and microchipped. Karen sent me a fleece from one of her silky llamas, and our adventure began.

There are two basic types of llama, the ccaras (translated “without hair”) and the chakus (translated “woolly”). The ccaras are the more common, sometimes called “classic,” and are used as beasts of burden. The chakus are single-coated animals with soft fibers, thicker fleece, and hair that falls over their eyes.

North American llama fleeces vary, but there are four main categories. The first is the ccara, a double-coated llama, which has more guard hairs and less woolly fiber in the shorter undercoat. This fleece must be dehaired before spinning, and the undercoat may be a great fiber to spin.

The other types of llama fiber are variations of the chaku, which is kept mainly for its wool. The second fleece type is the silky, which is slippery to the touch and lustrous. Suri is also lustrous and slippery to the touch, but the fiber twists into distinct strands and is quite heavy and drapey when knitted. The fourth type is huacaya, which is a single coat of fine, dense fiber that has lots of loft or crimp. Some guard hairs can be found in any of these three types, but some breeding programs over the years have resulted in animals with very fine guard hairs that usually don’t have to be removed before spinning. 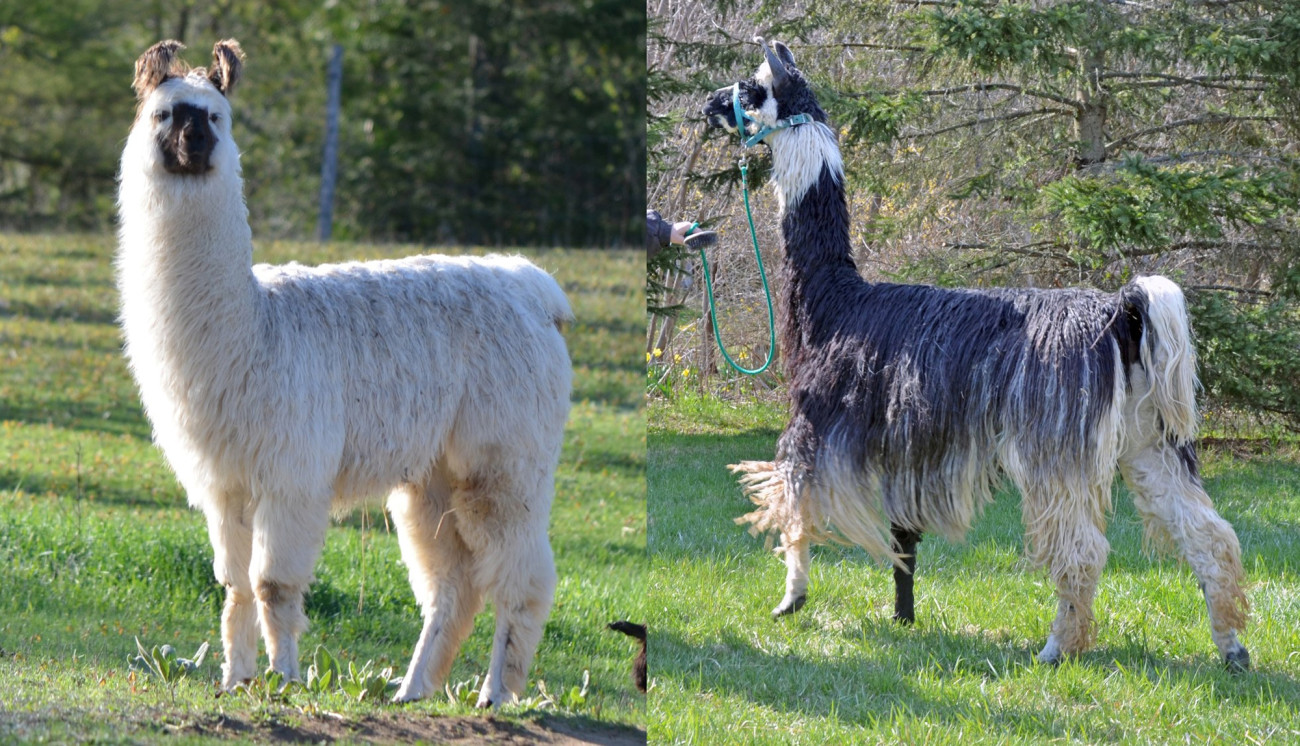 The quality of fleece is often judged by the diameter of the fibers measured in microns. As a general comparison, the fine Merino fiber that we are used to spinning generally falls in the range of 20 to 22 microns. Most alpaca fiber measures 20 to 35 microns, and llama undercoat ranges from 20 to 40 microns. By contrast, the very fine, highly prized, and expensive guanaco fiber is between 14 and 15 microns. Vicuña measures 12 to 14 microns, similar to cashmere.

The diameter of a fiber is only one of the characteristics that influence its value to a handspinner. Scale frequency and cuticular height may also affect how the fiber behaves. Fibers of similar diameter such as Merino, alpaca, and llama may differ significantly because of crimp or the construction and frequency of scales on the fiber’s surface.

In a study of 60 kids—20 huacaya, 20 suri alpacas, and 20 chaku llamas—a group of Italian scientists led by Dr. Alessandro Valbonesi found that llama fleece is clearly distinguished from both alpaca types, having the highest percentage of largest fibers and the highest percentage of fibers with more than nine scales per 100 microns of fiber length. The cuticular scale frequency for llamas and alpacas resembles that for wool (10 to 12) but is significantly higher than cashmere or mohair (6 to 8). Even though the diameter and scale frequency may be similar, the cuticular scale height is significantly different between Merino wool (well above 0.6 microns high) and llama and alpaca (less than 0.4 microns high).

As Barbara Kelly-Landry and I began this adventure with llama fiber, our spinning friends asked us, “Why?” After our very satisfying experiments spinning and blending, we are asking, “Why not?”

Interested in learning more about llamas and their experiments with fiber? Check out the Winter 2022 issue of Spin Off.

Annamarie Hatcher, PhD in Zoology from the University of Western Australia, is a freelance science writer and is studying to be a Master Spinner after 46 years of hobby spinning. Her interest in llama fiber for spinning began as an assignment for her Master Spinner program.